It’s the classic Midwestern summerhouse. And spring house. And winter house, come to think of it. For clients who wanted a yearround family retreat in southwestern Michigan’s Berrien county (which hugs the shore of Lake of Michigan), Evanston, Illinois-based landscape architects Kettelkamp & Kettelkamp took advantage of rolling terrain and picturesque woodlands to create a connection between the house and its environs.

Echoing the strong rectangular lines of the house, “we built everything in the landscape off that same grid,” says Kettelkamp. The landscape project was done in two phases; the first phase involved hardscape–gravel paths, wood fencing, and permeable pavement for the driveway– to complement the house. “The clients liked the results so much that they then purchased a second lot, another acre, and we did a second phase to carve spots out of the woodland,” says Kettelkamp. 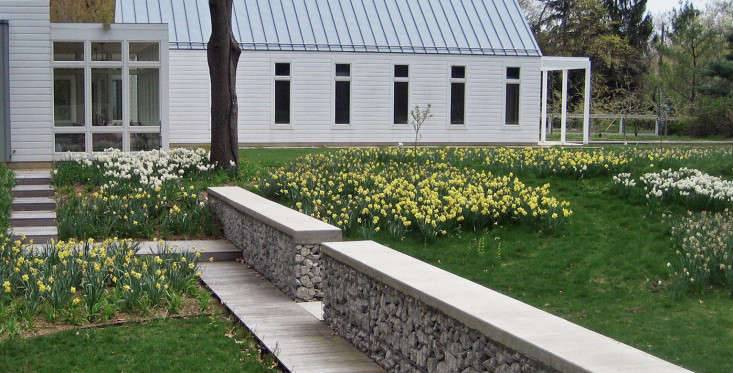 Above: Naturalized daffodils surround the house. “We ordered them in bulk and then we just broadcast them in big drifts,” says Kettelkamp.

The gabion basket walls were built using standard stock panels of wire from American Wire Products. “They sell these big individual panels of wire and you wire them together to make baskets,” says Kettelkamp. A compacted 1-foot-thick layer of gravel is spread beneath the wire frames, he said: “Then you fill the baskets with whatever you want. We knew about some concrete roads that were being ripped up nearby. We recycled the crushed concrete to fill the baskets.

“The nifty thing is you couldn’t build a garden wall like that. It looks like the clients dropped hundreds and hundreds of thousands of dollars on those walls. But because theses walls do not require foundation, it’s a very economical way of building old-fashioned garden walls,” says Kettelkamp. “The cost of labor is minimal in comparison to building traditional New England fieldstone walls.” 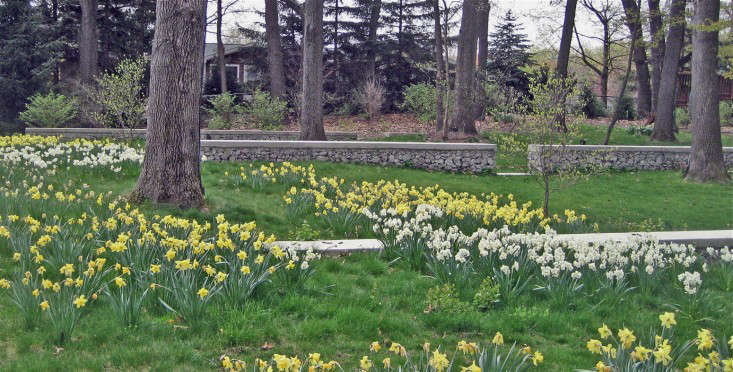 Above: In Phase Two of the project, more drifts of daffodils were planted in the reclaimed woodlands. “What you can see in the photo is that the naturalized daffodils are all planted with day lilies. This solves the problem of daffodil foliage, which stays forever after the flowers bloom,” says Kettelkamp. “Day lily foliage looks very similar. As the daffodils die down, the day lilies come up. The interplanting hides the daffodil foliage when it starts to look ratty.” 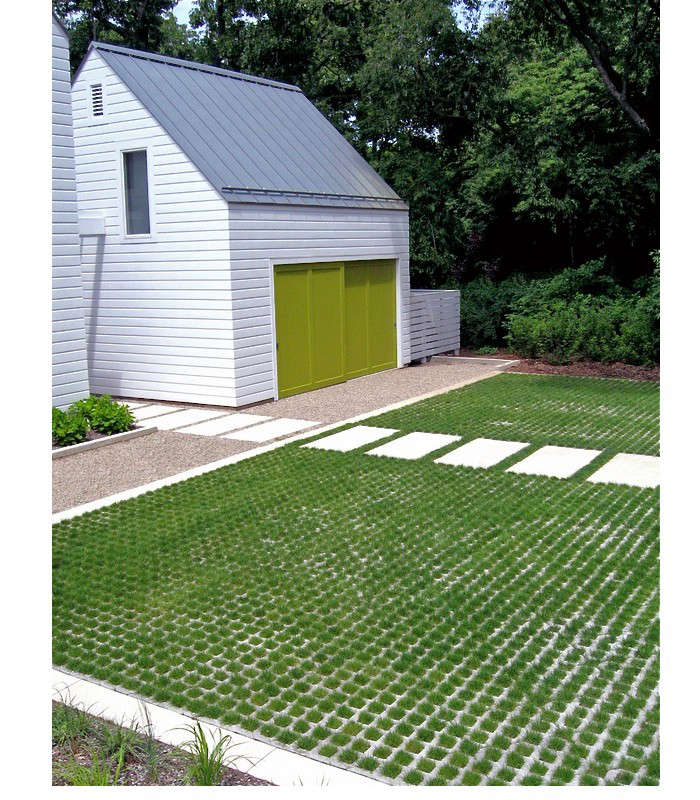 Above: The driveway is permeable turf block pavers planted with crowns of grass. To construct the driveway, “we poured a concrete picture frame, a 1-foot-wide band, all the way around the area,” says Kettelkamp. “Then we laid the diamond pattern on the bias, so it squares up onto the grid.”

The trick, when planting grass in the pockets, is to set the soil level low. “The product can look bad on many jobs, and we asked ourselves why, and the answer is that when landscapers or people are installing it, they frequently set the level of soil in the little pockets too high. Then the crown of grass is up to the level of the car’s wheels, which kill the grass when they drive over it.” 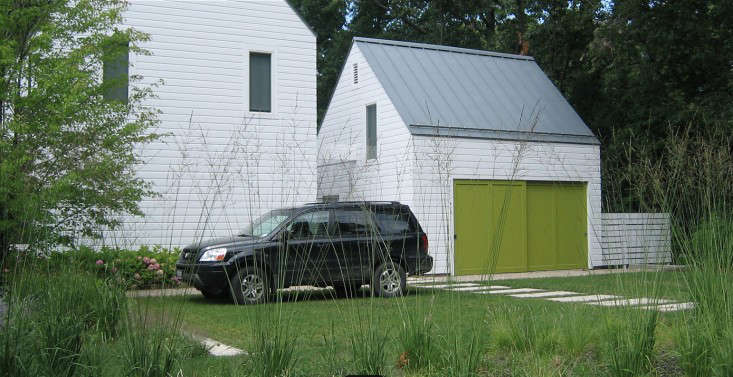 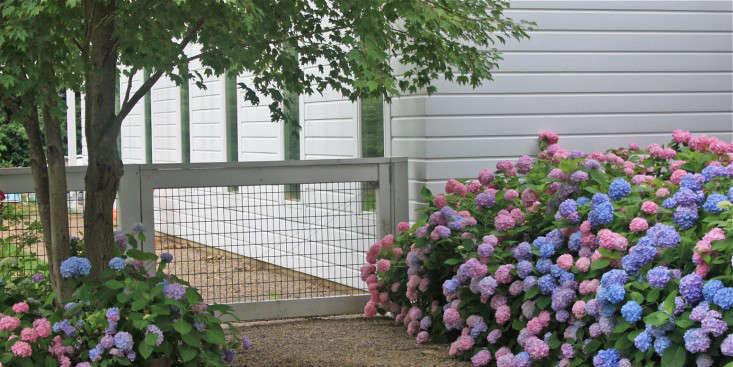 Above: Hydrangeas change color based on the pH level of the soil. The more alkaline the soil, the pinker the flowers. So how does this clump of hydrangeas manage to produce both pink and blue flowers?

“There are pockets of both alkaline and acidic soil under that bush, and flowers bloom in that huge mixture of colors as a result,” says Kettelkamp. “It gives them a confetti appearance that looks fantastic.”

N.B.: Want to tinker with the color of your hydrangeas? See Magic Trick: How to Make Your Hydrangeas Change Color. 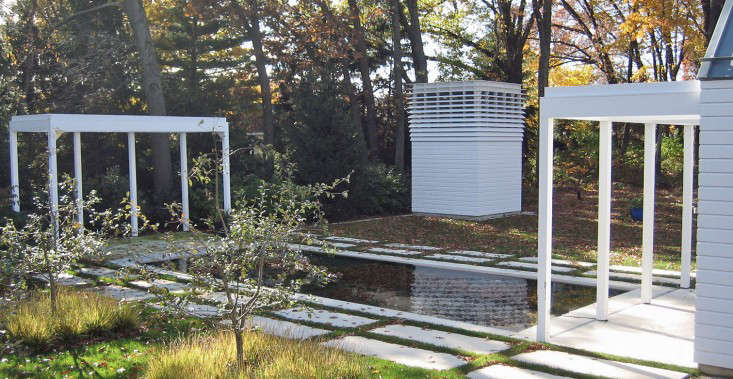 Above: The pool house shed is a freestanding building and has a louvered top; it “looks like a small agricultural building,” says Kettelkamp. 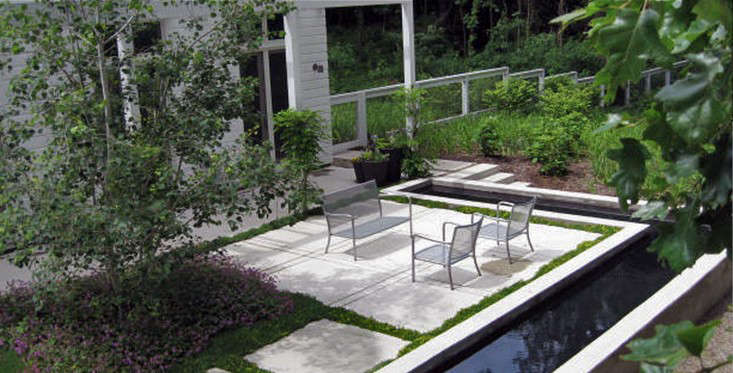 Above: All the paths, terraces, and pavers on the property are broom finished concrete, says Kettelkamp. Slabs of concrete edge the pool. “We let lawn grass run into the gaps between the slabs,” says Kettelkamp.

The wading pool is a narrow 4-foot-wide linear strip of pool that surrounds the terrace like a moat. 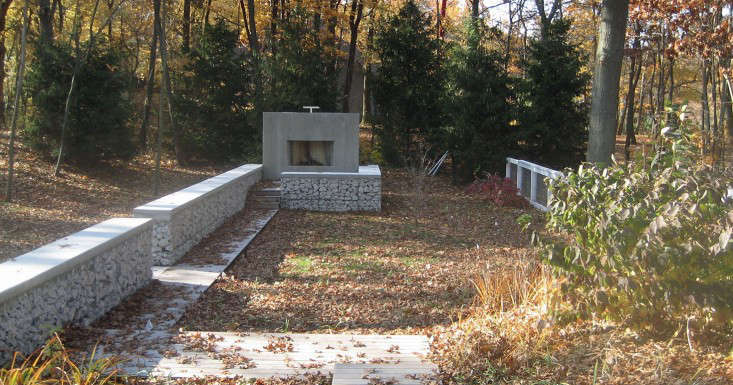 Above: The firepit, made of concrete, is a garden destination. “Part of our task was activating parts of the landscape that might not otherwise be used,” says Kettelkamp. A dense thicket of buckthorn and other underbrush was cleared to create the firepit area. 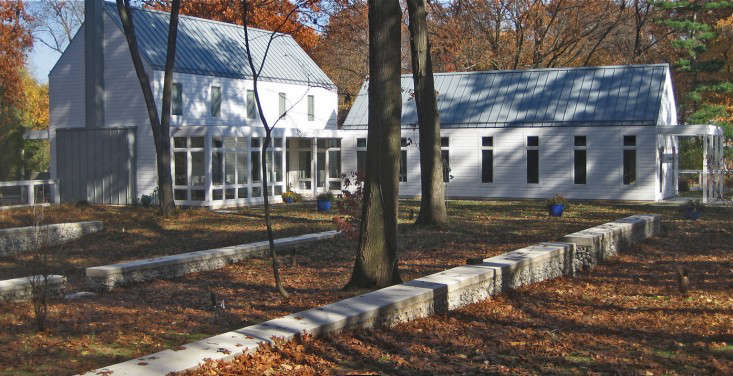 Above: The gabion basket walls are topped with caps of poured concrete.

Above: The height of the gabion walls is the same all over the property, although the slope of the land itself changes. The effect is “really fun, and allows you to really see the change in elevation,” says Kettelkamp. “If you set the wall tops dead level, the ground goes up and down and exposes bits and pieces of the walls.”