In dreary late winter, baubles of yellow are something to get excited about, especially on a lichen-encrusted branch. The tiny flower heads are warmly golden, with a strong element of green when young, but their beauty lies in the way they scatter themselves across open branches, looking even more striking against a dark background of woodland and evergreens.

Like so many common names, “cornelian cherry” is misleading, since this is not a cherry, while for once, the Latin name rolls off the tongue.  Cornus mas is more adaptable than other dogwoods, being happy in alkaline soil—and any soil, as long as it is not waterlogged. It tolerates draught, puts up with wind, and if it’s happy, it’s healthy.

Often compared with Forsythia when grown as a shrub or hedge, Cornus mas is infinitely more desirable, having a more subtle colour, classic dogwood leaves, as well as shiny fruits that resemble elongated cherries. As windfall, the fruit makes easy pickings for ground-feeding birds and mammals, as well as insects but the fruit of Cornus mas has also been used in cooking and medicine for millennia. Like medlar or quince, it is a bit of a bother to prepare, since the pit is difficult to prize away from the flesh. It may be worth it though: cornelian cherries have twice as much Vitamin C as oranges.

Bearing male and female flowers (the mas part of its name referring to the male), Cornus mas is also adaptable in its pruning regime. Cut out the suckers as it slowly grows, and you will have a single stemmed tree of about 20′ in height and diameter, after 20 years. Alternatively, maintain it as a roundish or oval shrub with loose pruning.

Part of the elegance of Cornus mas lies in the warmth of its yellow: warmer than the shivery yellow of primroses, and the later onslaught of “gold”  King Alfred daffodils. Its textured bark makes a strong contrast with the small flower heads; ideal for bringing indoors as a pruned branch. The wood is dense, sinking in water, and was traditionally used for making weapons and tools. The foliage of Cornus mas generally takes on a reddish-purple hue in the fall. 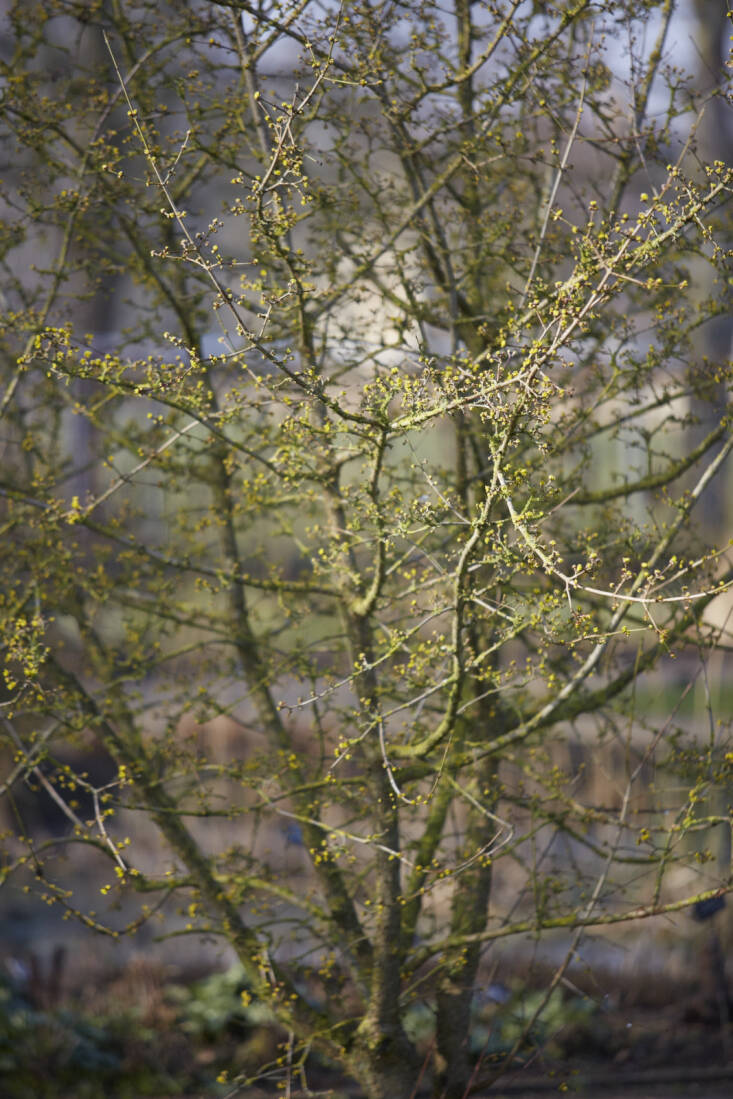 • Native to southern and central Europe, and Southwestern Asia, Cornelian cherry is an unusual dogwood with early yellow flowers that emerge in late winter. When the leaves eventually appear, they are more recognizably part of the Cornus genus, being well-shaped, with indented veins, like very small hostas.
• Several cultivars carry the RHS Award of Garden Merit, including  Cornus mas ‘Golden Glory’, which is very floriferous, ‘Jolico’, for the quality and quantity of the fruits, and ‘Aurea’ for yellow leaves in the fall.
• Other varieties to seek out are Cornus mas  ‘Xanthocarpa’ and ‘Flava’ for yellow fruit, or ‘Violacea’ for purple fruit. 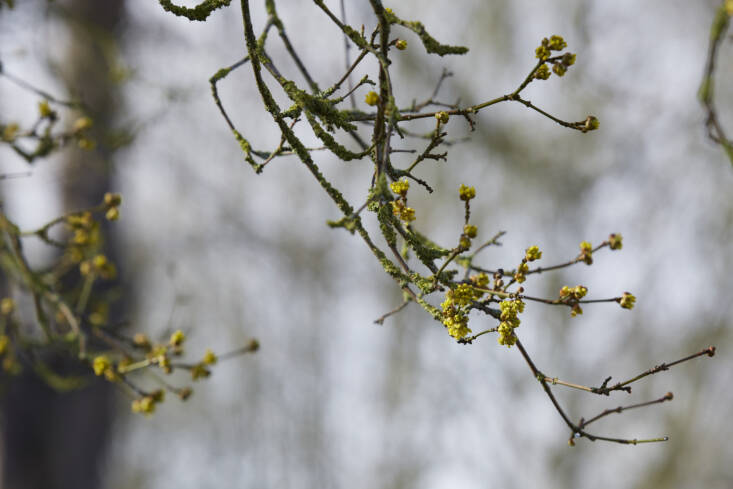 • Cornus mas is very easy going, and grows in any aspect. Flower and fruit production will respond to the amount of light received by the tree or shrub: choose full sun or partial shade.
• Grow Cornus mas where it will be best appreciated in the gloom of late winter. It makes an excellent, wide, specimen tree, drawing further attention to itself with summer fuits and autumn foliage.
• Preferring a more limey soil than most dogwoods, it is more important to plant Cornus mas in soil that is well-drained and, ideally, hummus-rich. Hardy to USDA zones 4-8.

Pick Your Own Roses at Cape Town's Chart Farm