Item No. 1: If your doting father died when you were 12 years old in 1925 and left you one of the world’s great fortunes, you can buy an Oahu property with a 4.5-acre beachfront simply because it catches your fancy on your honeymoon. You can build the island’s most expensive house (at a cost of $1.4 million in 1938). Then you can fill the rooms of the 14,000-square-foot home with 3,500 works of Islamic art, including religious antiquities acquired on archeological digs and transported by camel (which you obtain by outbidding the New York Metropolitan Museum of Art).

As for the gardens? You can construct a rich American’s idea of a fanciful Mughal Garden, with a 280-foot-long water channel lined by cypress trees and caged monkeys and parrots. You can build a private rock jetty to make it easy to dock your yacht. When the Honolulu Harbor Board refuses you permission to build a beachfront swimming pool (and they will), you can simply buy the next-door property which already has a swimming pool.

The list goes on. But it’s more fun to see for yourself some of the items on it: 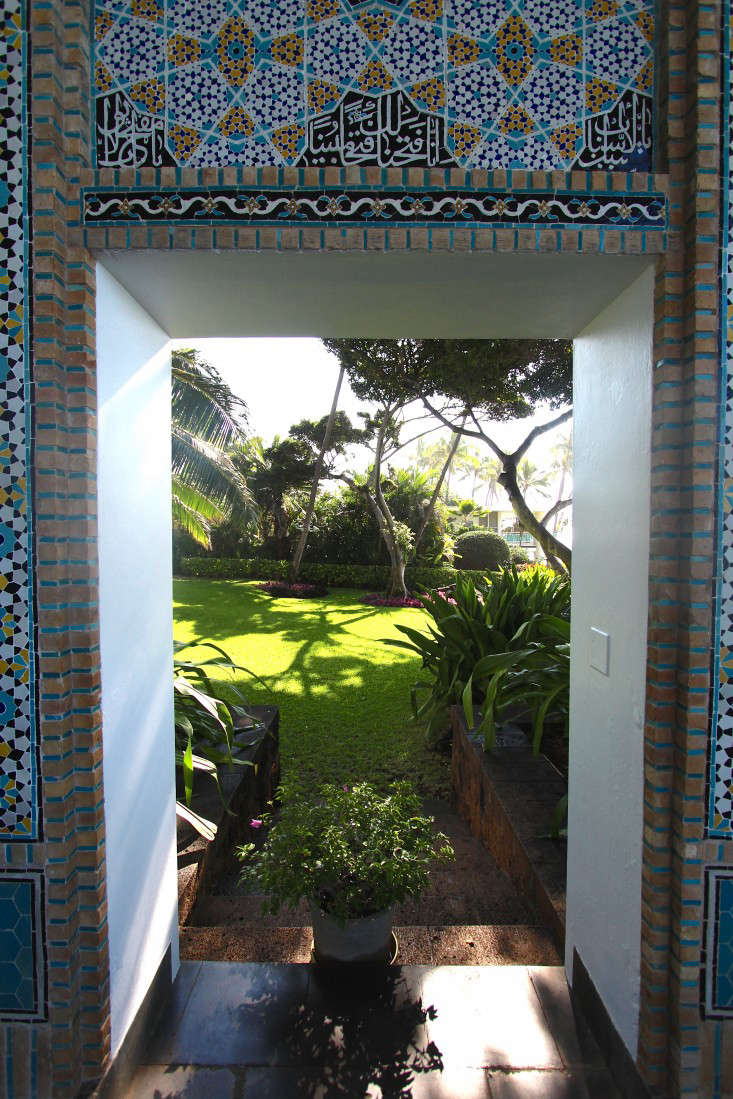 Above: Duke was introduced to and captivated by Persian art and culture while touring the Middle East on her honeymoon, a trip that proved an inspiration for her Honolulu house, designed by architect Marion Sims Wyeth in a style best described as eclectic heiress.

Doris Duke’s Shangri La estate was where she she went to escape the world. It was a place where she found peace (she was so captivated by “the delightful climate” that she stayed behind when her first husband, James Cromwell, flew east to spend a weekend with his mother). And it was a place where she experienced sadness. In 1940, her only child, Arden Cromwell, was born prematurely in Honolulu and died after a day. 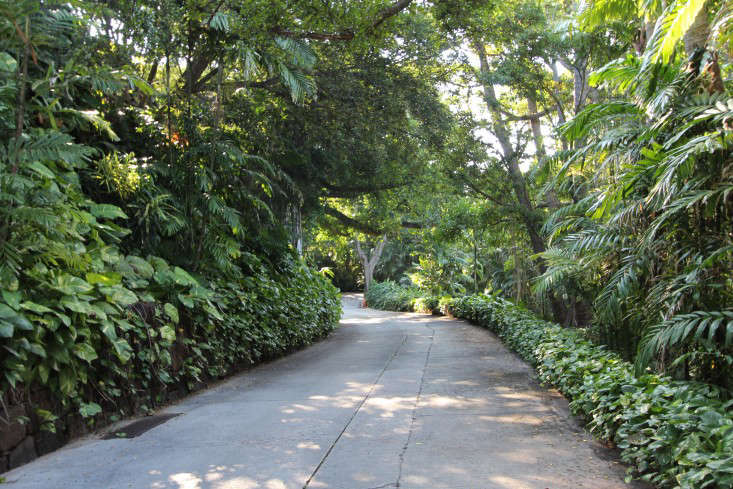 Above: Not visible from the street, Shangri La nowadays is at the edge of a suburban neighborhood that grew up around it in the decades that followed its construction. A long, steep driveway leads down from locked gates to the front courtyard. 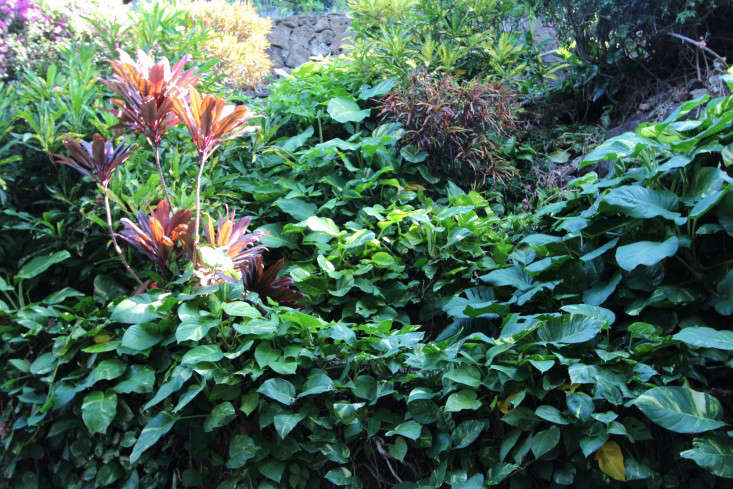 Above: Now called the Shangri La Islamic Center for Arts and Cultures, the property is owned by a foundation funded by Duke’s estate (she died in 1993). The gardens and landscape are maintained neatly, and because it is Hawaii, you will see colorful vignettes of tropical exuberance. 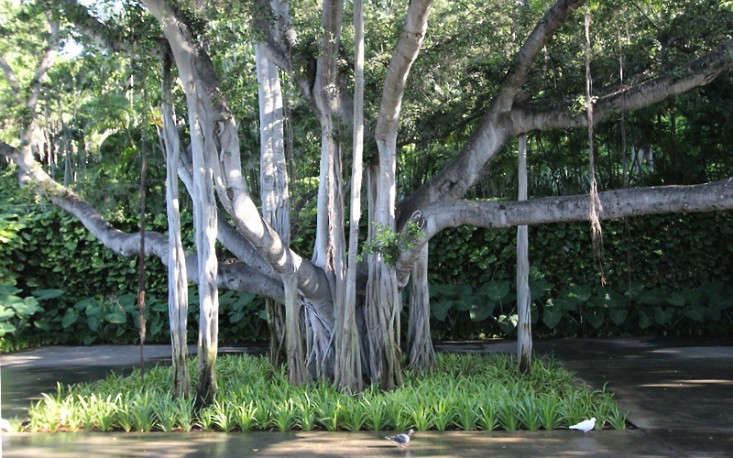 Above: An enormous Chinese banyan tree planted in the entry courtyard in 1937 welcomes minivans of tourists.

The low-slung single-story house has a deceptively simple white facade. Step inside to see the splendors. 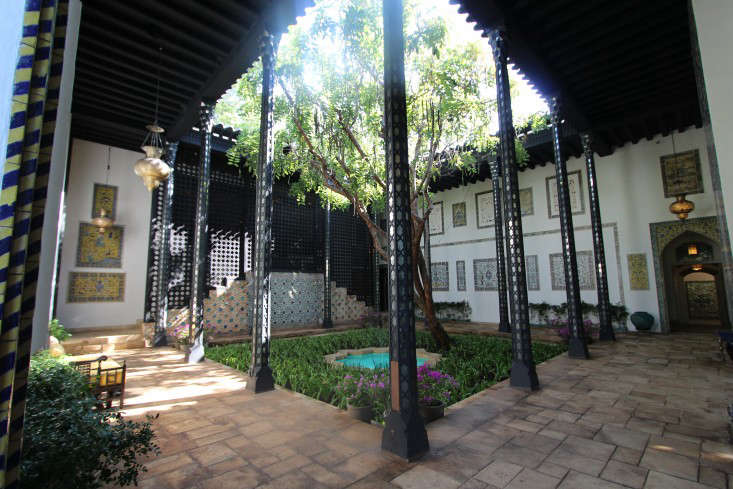 Above: An open-air courtyard is the heart of the house. Visible here is the mix of modern, Islamic, Hawaiian, and Spanish Mediterranean influences that resulted in a home that is uniquely American.

Doorways connect this outdoor living space to the living room, foyer, and outdoor terrace. In the courtyard mirror-panel columns reflect sunlight. A star-shaped central fountain surrounded by irises and a golden shower tree (Cassia fistula) are at center. Persian tiles, the oldest dating to the 1400s, cover the walls. 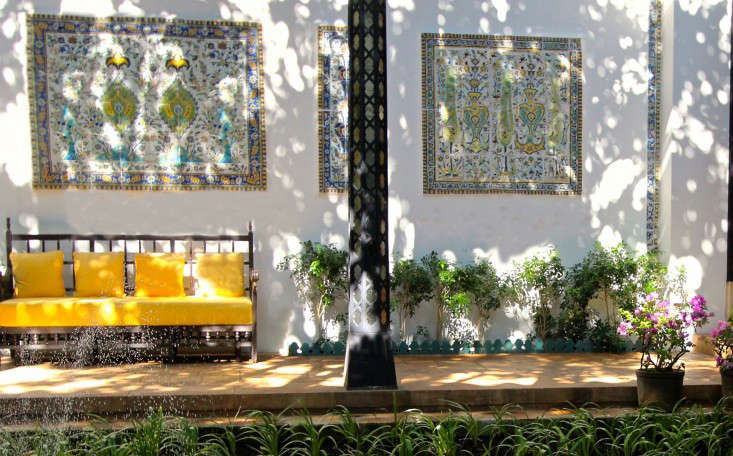 Above: “The primary aesthetic in the courtyard is Persian, and the majority of its architecture and tile work can be traced to Doris Duke and her husband James Cromwell’s visit to Iran in 1938,” notes the foundation. 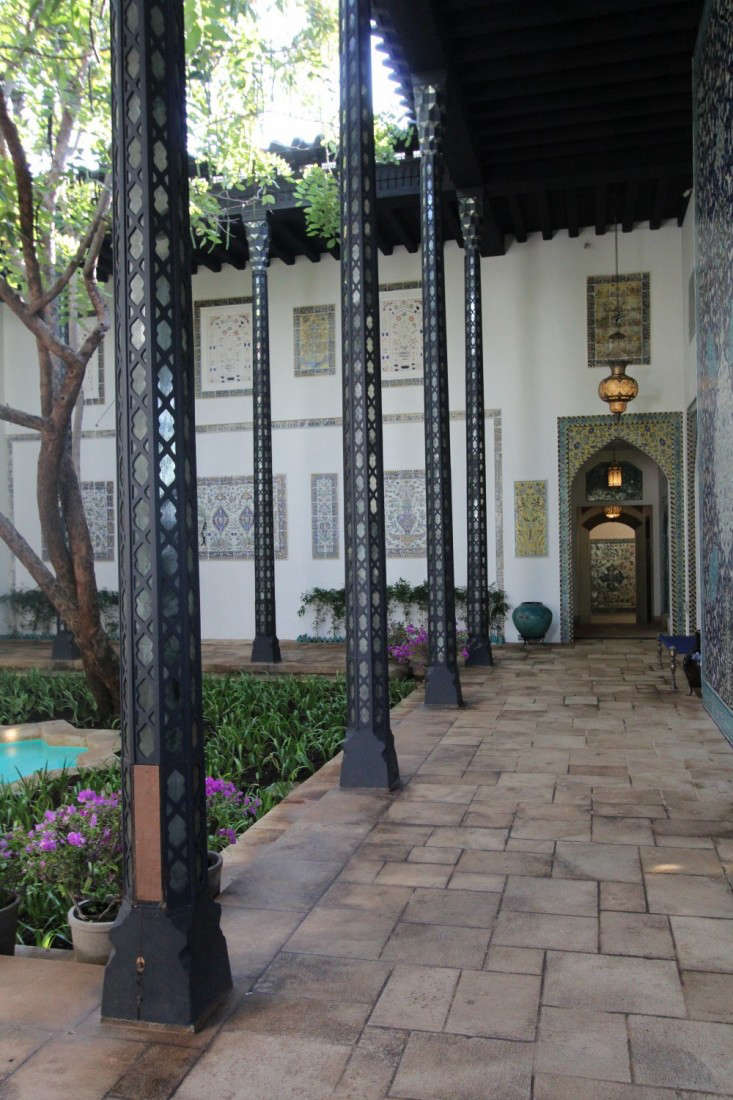 Above: Hanging copper alloy lamps light the space at night.

Inside the un-air-conditioned house at the edge of the sea are priceless artworks, including a 13th century mihrab (or prayer niche) of iridescent tiles. In 1940, Duke bought it for $150,000 after outbidding the Met. After the bombing of Pearl Harbor, she phoned from the mainland to instruct the staff to take the tiles off the walls to store them safely. After World War II ended, Duke flew in 1946 by Pan American Clipper to Oahu for her first visit in more than five years to continue work on the house and garden. 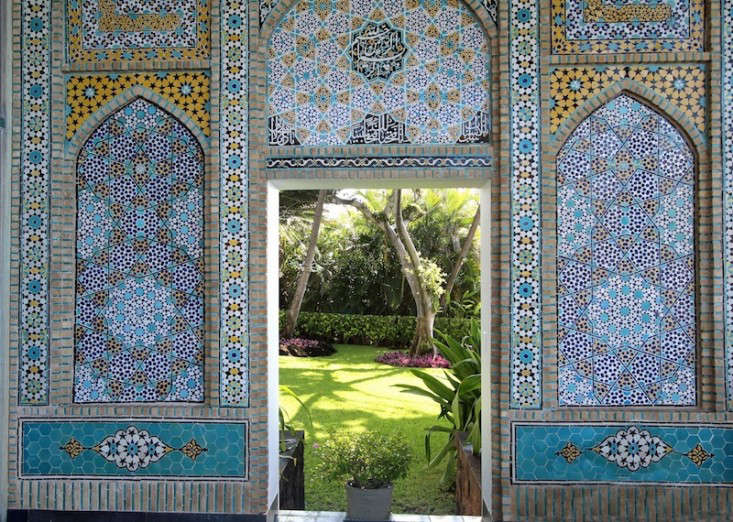 Above: A tiled lanai off the back of the house is reached through the dining room (which is decorated in a style Miss Duke meant to invoke a Persian tent). 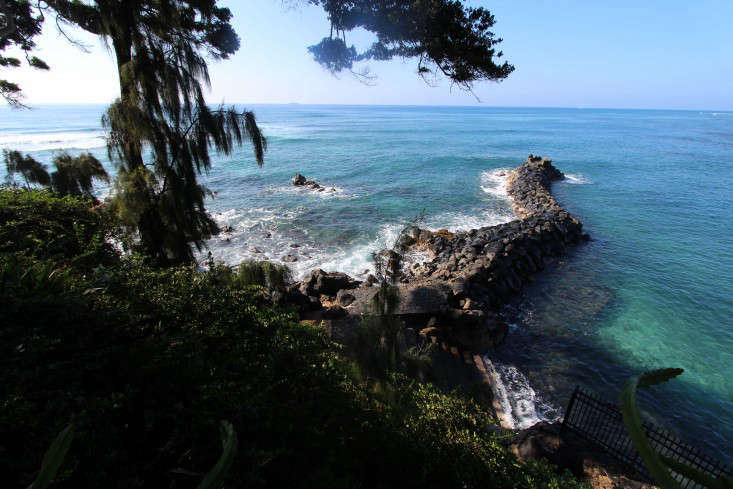 Above: Looking south from the tiled lanai. 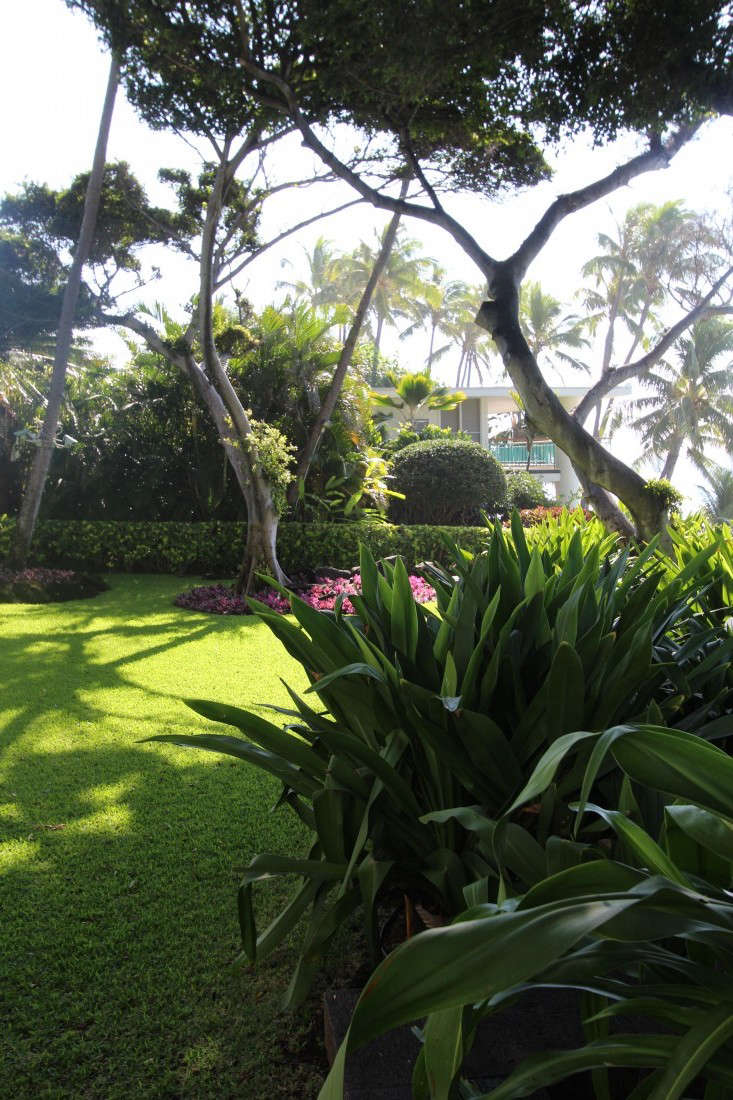 Above: A side garden, accessible from the lanai, offers a glimpse of the next-door neighbors’ house. 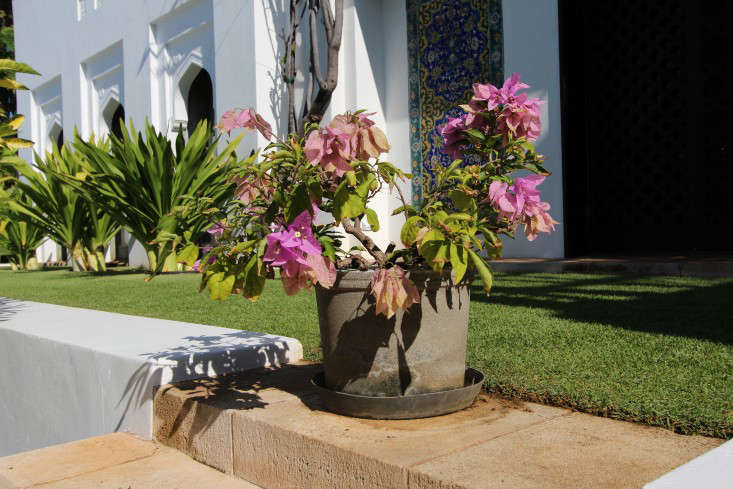 Above: Fuchsia is the predominant color (other than green) in evidence in the garden. 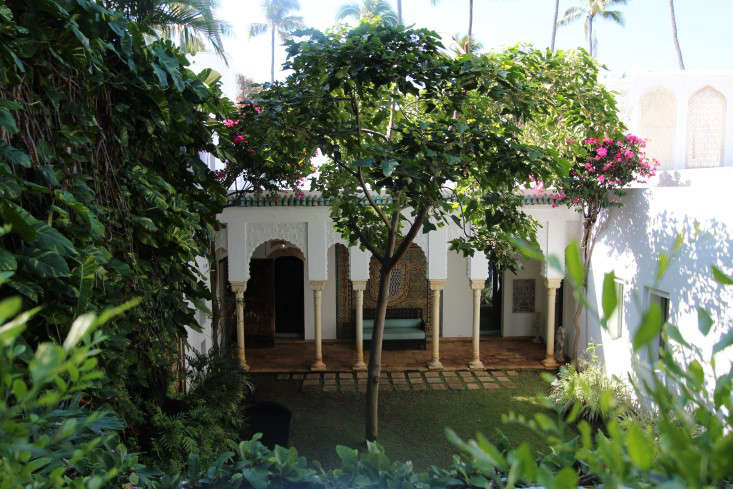 Above: Seen from above, a private open-air hallway leading to Duke’s bedroom wing. 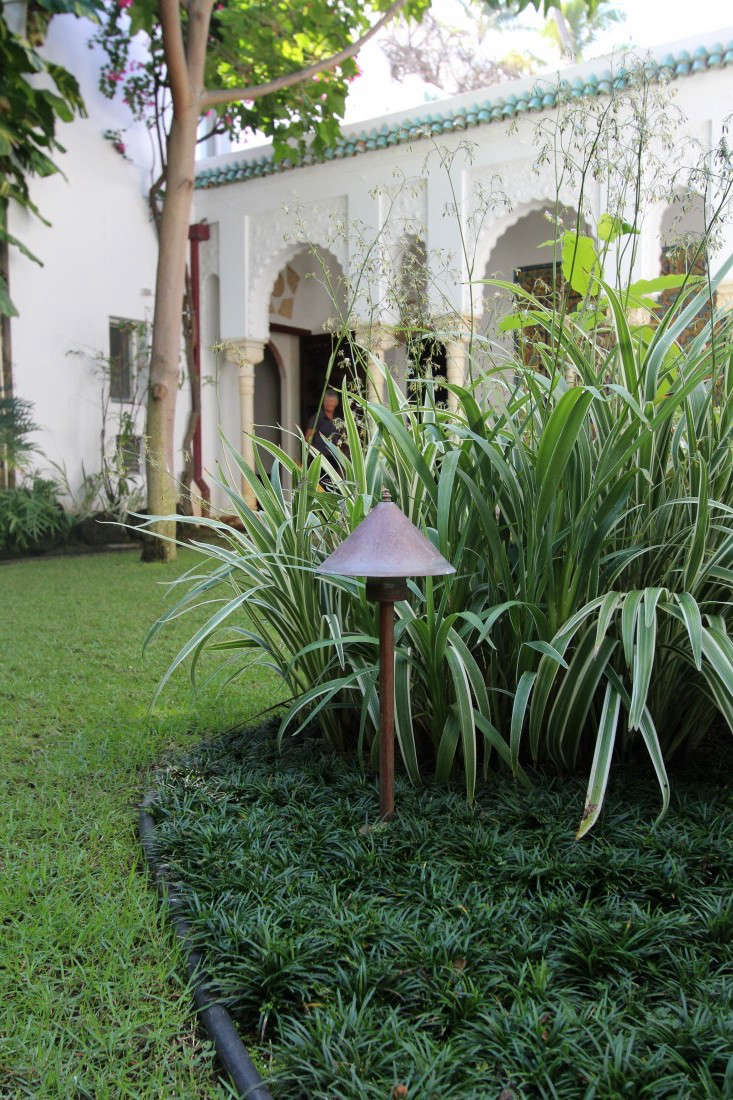 Above: Low-profile outdoor lighting blends into the surroundings. 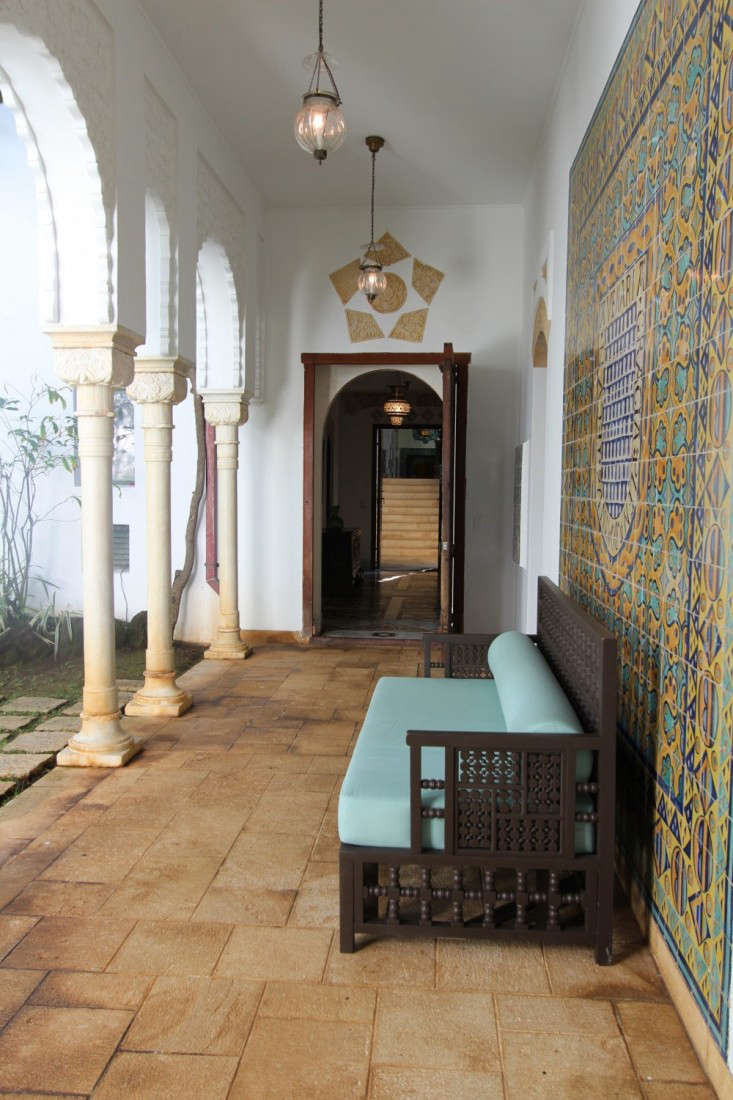 Above: Outside Duke’s bedroom is a settee from which one can listen to the manmade waterfall installed against a courtyard wall. 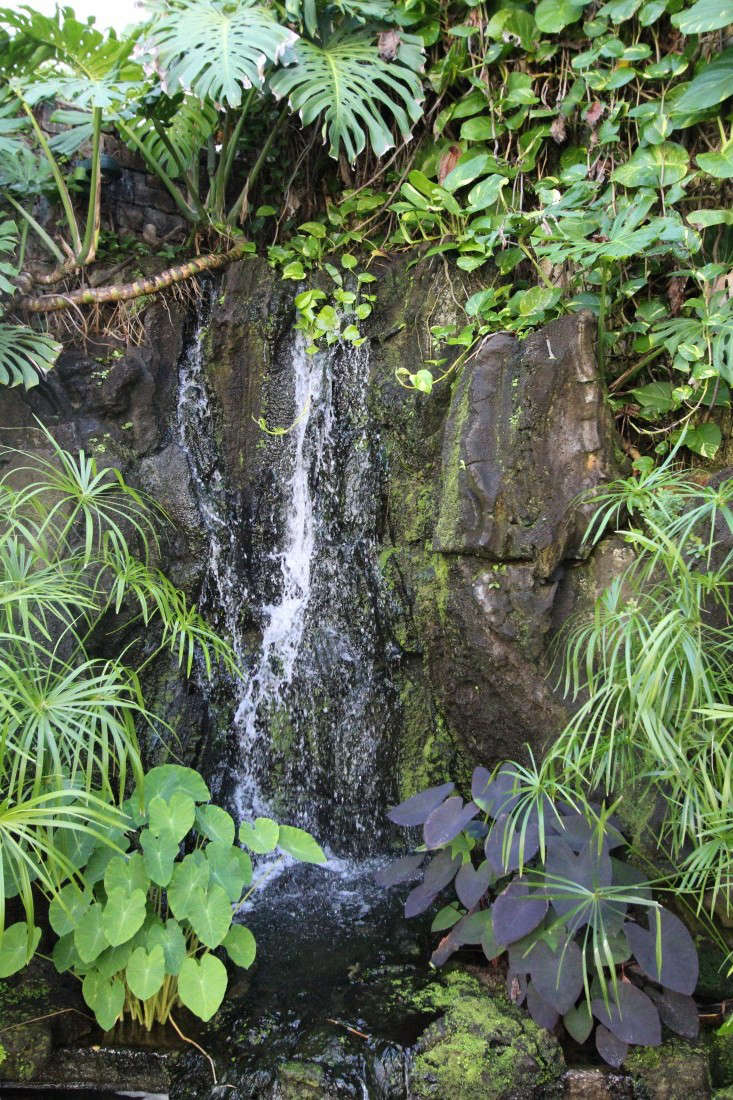 Above: The waterfall empties into a koi pond. 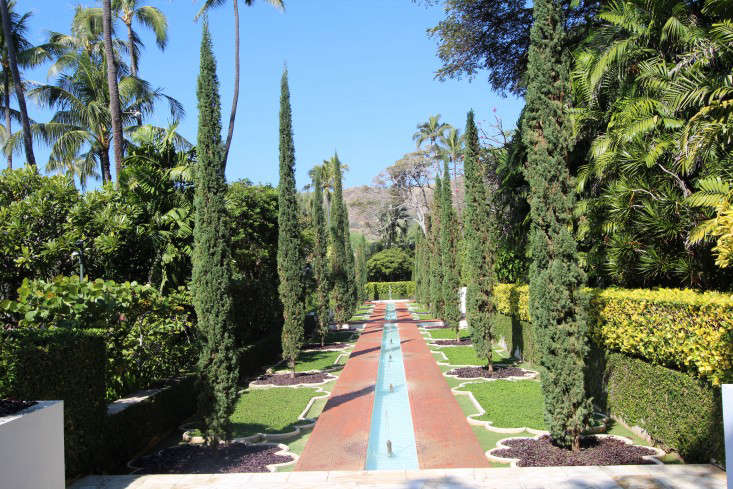 Above: The 280-foot-long water channel in the Mughal Garden led, at one time, to an enormous bamboo birdcage filled with parrots. Symmetrical plantings recall the Shalimar Gardens in Lahore, Pakistan, an influence on Duke’s design. 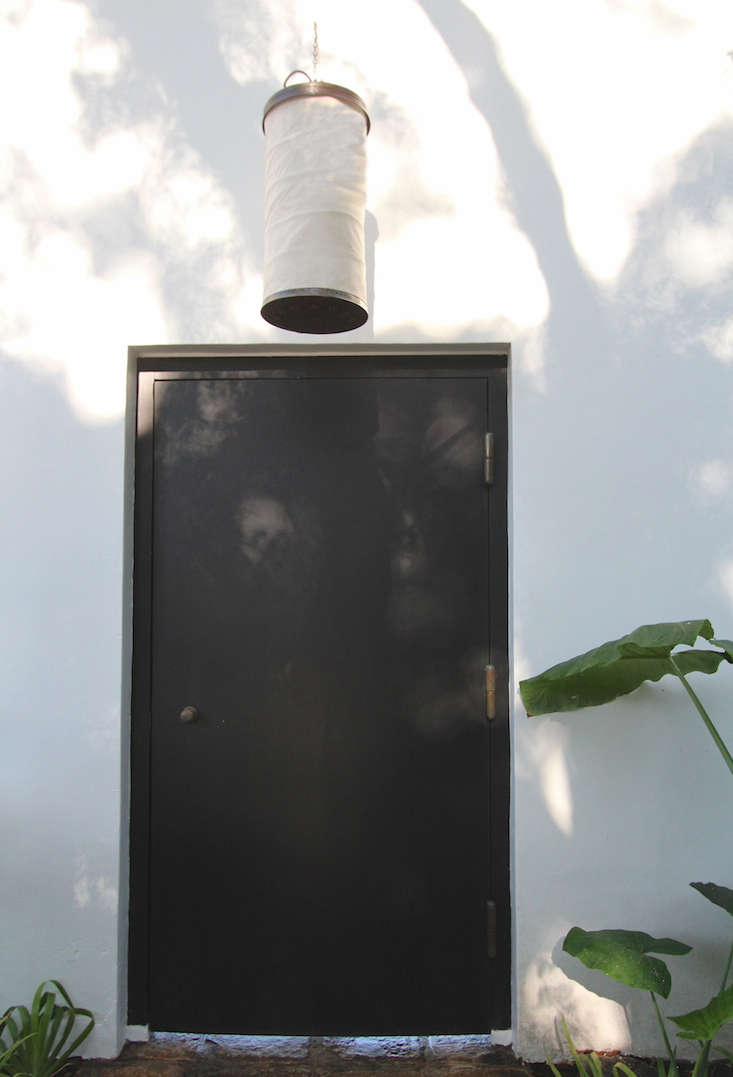 Above: The entry to the Mughal Garden gives no hint of the grandeur beyond the door.