Grey Gardens price cut alert: the East Hampton property, listed for sale in February, now has an asking price of $17.995 million (a $2 million drop from the original price).

Purchased in 1979 by journalists Sally Quinn and Ben Bradlee (who died in October 2014), the East Hampton estate became famous in a 1975 documentary film about the strange and sad decline of its previous residents (an aunt and cousin of Jacqueline Kennedy Onassis who spent their last years living in filth, with dozens of cats). The garden, it goes without saying, was in ruins by the time Quinn and Bradlee bought it.

This is a famous story, of course, partly because Bradlee was at the time executive editor of The Washington Post and a celebrity in his own right. After editing the Watergate coverage that brought down a US president, he’d seen himself played onscreen in All the President’s Men by Jason Robards. (The main differences between the actor and the real-life editor, people said, was that Bradlee was better looking and had a bigger personality.) When his wife told him she wanted to buy the crumbling, flea-infested Grey Gardens for $220,000, Bradlee replied, “You’re out of your mind.”

We should all be so insane. Let’s take a stroll around the garden today (and keep reading for historic views of the property):

Photography via Corcoran except where noted.

Says Fensterer, “I brought in large trees and evergreens, creating a natural structure to soften the old wall, which was the only thing that remained after years of neglect and decay.”

The 1975 documentary Grey Gardens chronicled the lives of Jacqueline Kennedy Onassis’ aunt and cousin, Edie Beale and daughter Edith, who were living in the derelict mansion the family had owned since 1926.

A few years after Onassis paid $32,000 to install heating and water pipes—and to cart away tons of garbage) Quinn and Bradlee bought the property in 1979. “I wasn’t sure I wanted to buy the house,” Bradlee later told The New York Times. “There were 52 dead cats in it, and funeral arrangements had to be made for each one.”

Above: Grey Gardens was built in 1897, but the gardens didn’t go in until years later. Here, the ivy-covered home and gardens in 1916. 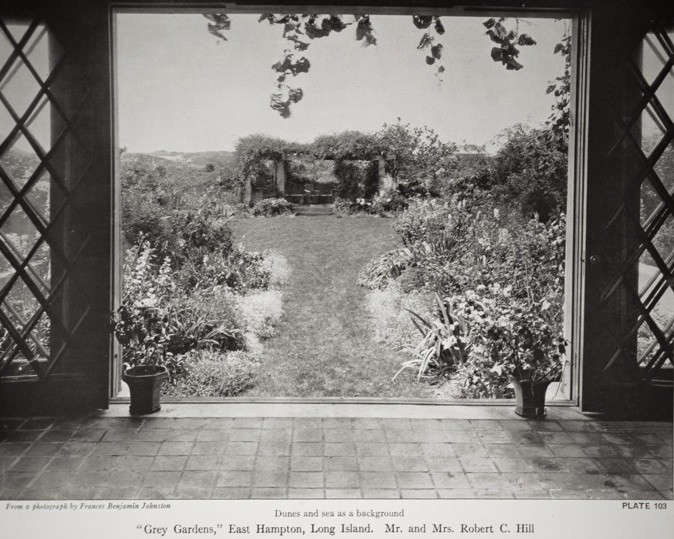 Above: A view of the original garden from the house, published in the 1916 book Beautiful Gardens in America.

In 1913, Grey Gardens was purchased by coal magnate Robert Hill and his wife Anna Gilman Hill. Anna hired landscape designer Ruth Bramley Dean, and the pair collaborated on the design of the original walled garden and surrounding landscape. 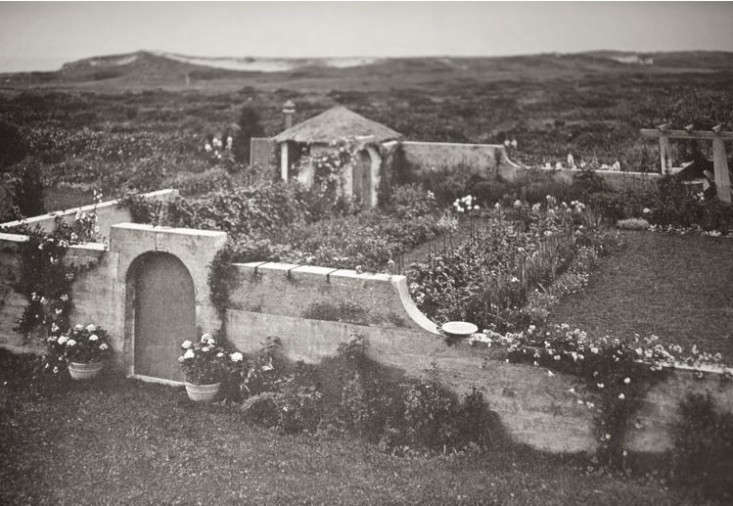 In her memoir, Hill writes of the estate: “It was truly a gray garden. The soft gray of the dunes, cement walls and sea mists gave us our color scheme as well as our name….nepeta, stachys, and pinks….clipped bunches of santolina, lavender, and rosemary made gray mounds here and there. Only flowers in pale colors were allowed inside the walls, yet the effect was far from insipid….I close my eyes and sense again the scent of those wild roses, the caress of the hot sun on our backs as we sauntered to and fro from our bath and lazy mornings on the beach.” (Excerpt via garden writer Stephen Orr’s blog, What Were the Skies Like.)

Big Edie Beale (Jackie Onassis’ relative) and her husband, Phelan, acquired the house in 1924 and divorced in 1946. Edie stayed in the house and Phelan sent monthly checks of $300 to his ex-wife. But not for long. Little is known about Grey Gardens between then and the early 1970s.

By 1971, the house was run down and Big Edie and her daughter were living in rooms filled with garbage, home to scores of raccoons and cats, and infested with fleas. The house lacked running water and plumbing.

In 1972, when the Suffolk County health department ordered Big Edie and her daughter evicted unless they cleaned up the property, the story garnered media attention. Cousins Jackie Onassis and her sister, Lee Radziwill, gave $30,000 to the Beales to use on repairs.

After minimal restorations, the county said the Beales could stay. Here, the house in 1975 after the cleanup, during filming of the documentary.

Big Edie died two years later, in 1977, and Little Edie continued to live in the house, alone, for another two years. She moved out of the room she had shared with her mother into a small room with only a mattress on the floor. Penniless, she put the estate up for sale.

Quinn and Bradlee decided to recreate the garden as they thought it might once have looked. While cutting through a thicket of tangled vines, Bradlee discovered the stucco walls of the original garden. The project required cranes to lift bulldozers inside the garden walls to clear the decay. Said Quinn, “The garden, of course, was the whole point of the house, the reason for its name, even though we have to take the previous owner’s word for it that it even existed.”

Back in 1984, Quinn wrote: “We knew it would take years to get that lush overgrown feeling that makes it look as if it had always been there.”

The new garden, says Fensterer, is a romantic one, where flowers and trees grow “with wildness and abandon.”

Many years after buying the property, Sally Quinn told CNBC, the house still smelled like cat urine when it rained, in one corner by the front door. “Ben always takes people over to the corner and makes them get down on their knees and smell the floor,” she said.

Before and After: Big Box Meets Local for a $550 Porch Makeover in Portland, Maine