When garden photographer Joseph Valentine and his wife, Paula, bought Juniper Hill Farm in 1999, they were charmed by the New Hampshire property’s history. They had been searching for an antique home and the house at Juniper Hill Farm  had been built in 1789, “the same year George Washington was elected president, so in our mind that qualified as antique,” says Valentine.

For four years the couple, who lived in Massachusetts, used the property as a weekend home. “The house had many original features intact and we spent most of our time during those first several years trying to restore the house to a look that would have been recognizable in the eighteenth century,” says Valentine.

Soon after they moved full-time to New Hampshire, they “began gardening seriously,” says Valentine. “Here in our part of New Hampshire winters are long and much of the garden is covered under a blanket of snow for months at a time. So always at the back of my mind when designing a new section of the garden is how it will look during the winter months.”

The result? Juniper Hill Farm is a quintessentially New England garden that looks as beautiful under a blanket of snow as in its full summer glory: 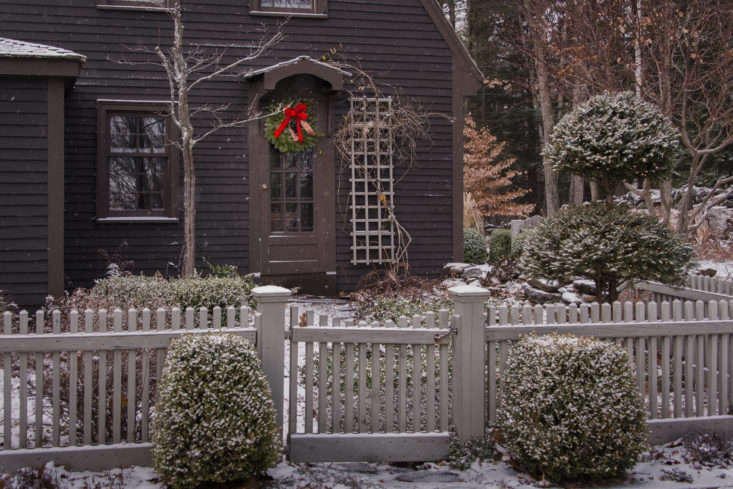 Above: At a side entrance to the saltbox addition (built in the early 1800s), two boxwoods (Buxus ‘Green Mountain’) flank the gate to welcome visitors. The topiary (at R) is Taxus baccata. Says Valentine, “I am a great admirer of boxwood as a plant to create both accent and structure and we have approximately 150 representing more than a dozen varieties.”

Juniper Hill Farm originally comprised about 600 acres, “but over the years it has been whittled down to its current size of 30 acres,” says Valentine. “The first thing that became evident when evaluating this site for a garden was its lack of notable features. The area around the house was a completely flat site that couldn’t be easily distinguished from the four acres of pasture that surrounded the home and barn.”

Valentine designed the garden as an extension of the house. “A garden is something you should feel that you are immersed in, not something you stand back and look at, like a painting,” he says. 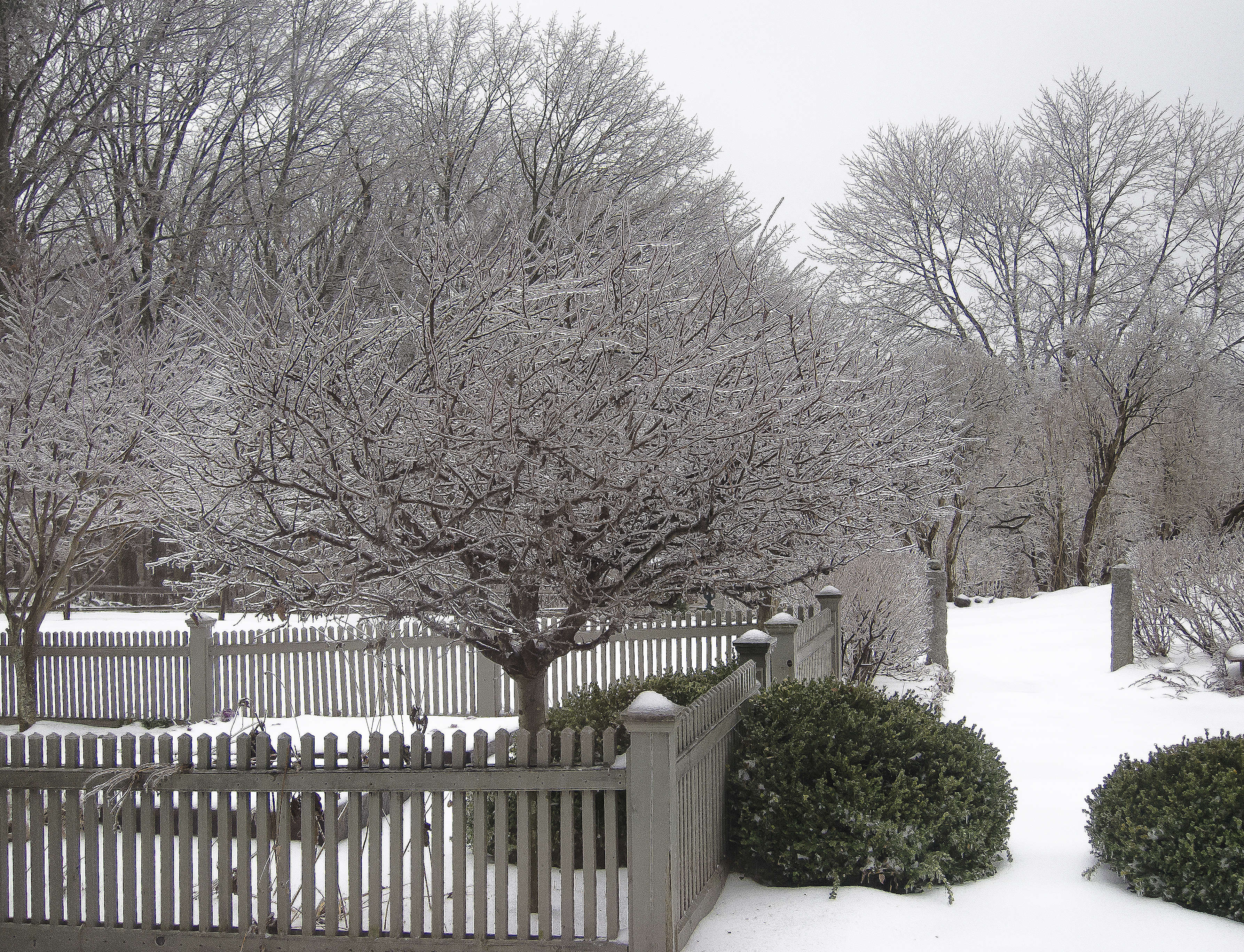 Above: Two flowering crabapple trees (Malus sargentii ‘Tina’) stand at the corners of a courtyard garden just off the kitchen, the first garden “room” Valentine built.  “Then, our good friends, garden designers Gordon and Mary Hayward suggested some ideas about how we could improve that space by expanding it into an al fresco dining area. At the time, I thought that this would be about the extent of our gardening at Juniper Hill,” says Valentine. Instead, the courtyard garden was “the spark for what is now approximately two acres of gardens” which Valentine designed and built himself. 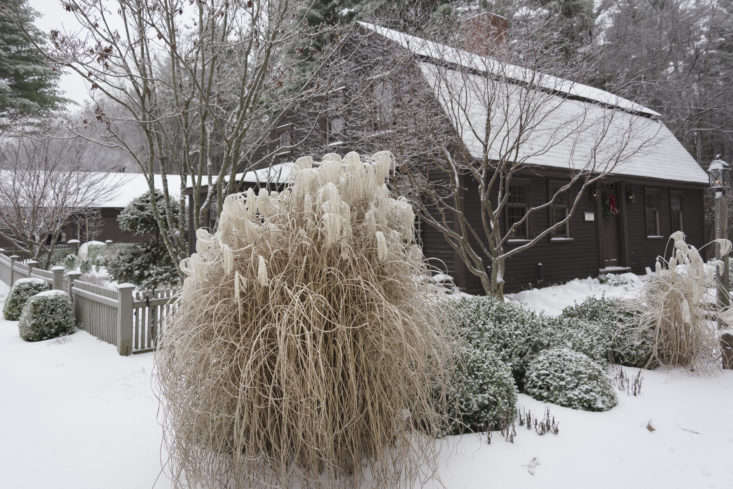 Above: Feathery Miscanthus sinensis ‘Morning Light’ lends a modern air (and an element of surprise) to the front garden. The original house—”a small farmer’s cottage with just two rooms over two”—faces a private drive which once was an old coach road connecting two towns, says Valentine.

“Good architecture will carry a garden through the winter, as will plants that can continue to stand out above the often deep snows here, like the large grasses that also add movement to the winter garden,” says Valentine. 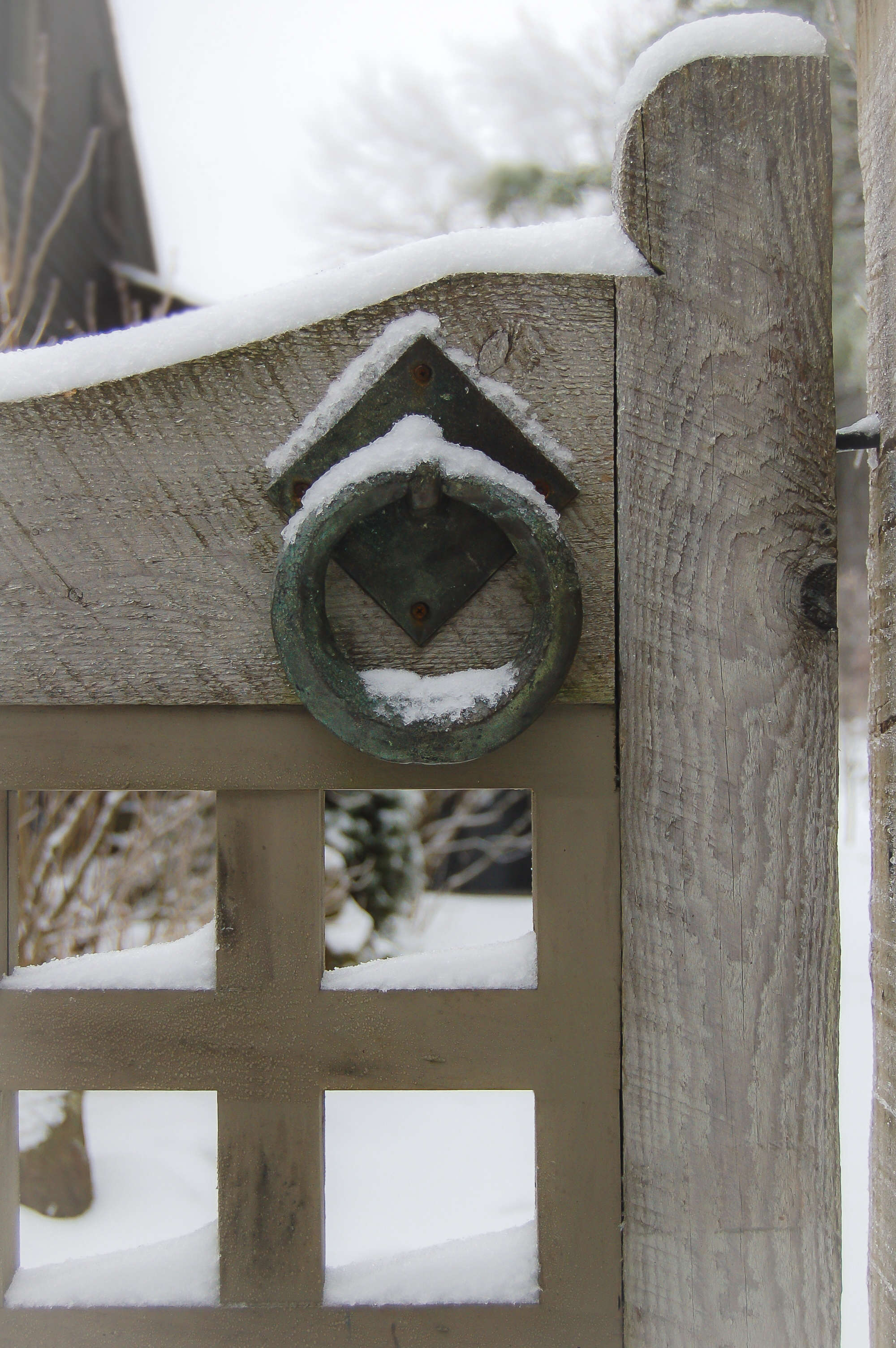 “The element of surprise, or the feeling that you’ve clearly transitioned from one space to another, is important,” says Valentine. “A garden should have a good flow that offers a variety of experiences.” Taking a lesson from English gardens designed during the Arts and Crafts era,  Valentine created separate garden rooms which allowed him “to create a different ‘look and feel’ within the separate garden rooms while still adhering to an overarching sense of place that fits our New England surroundings.”

Currently the garden’s dozen or so distinct rooms include a clipped green garden, a meditative Zen garden, a formal potager, a stumpery, and a frog pond. 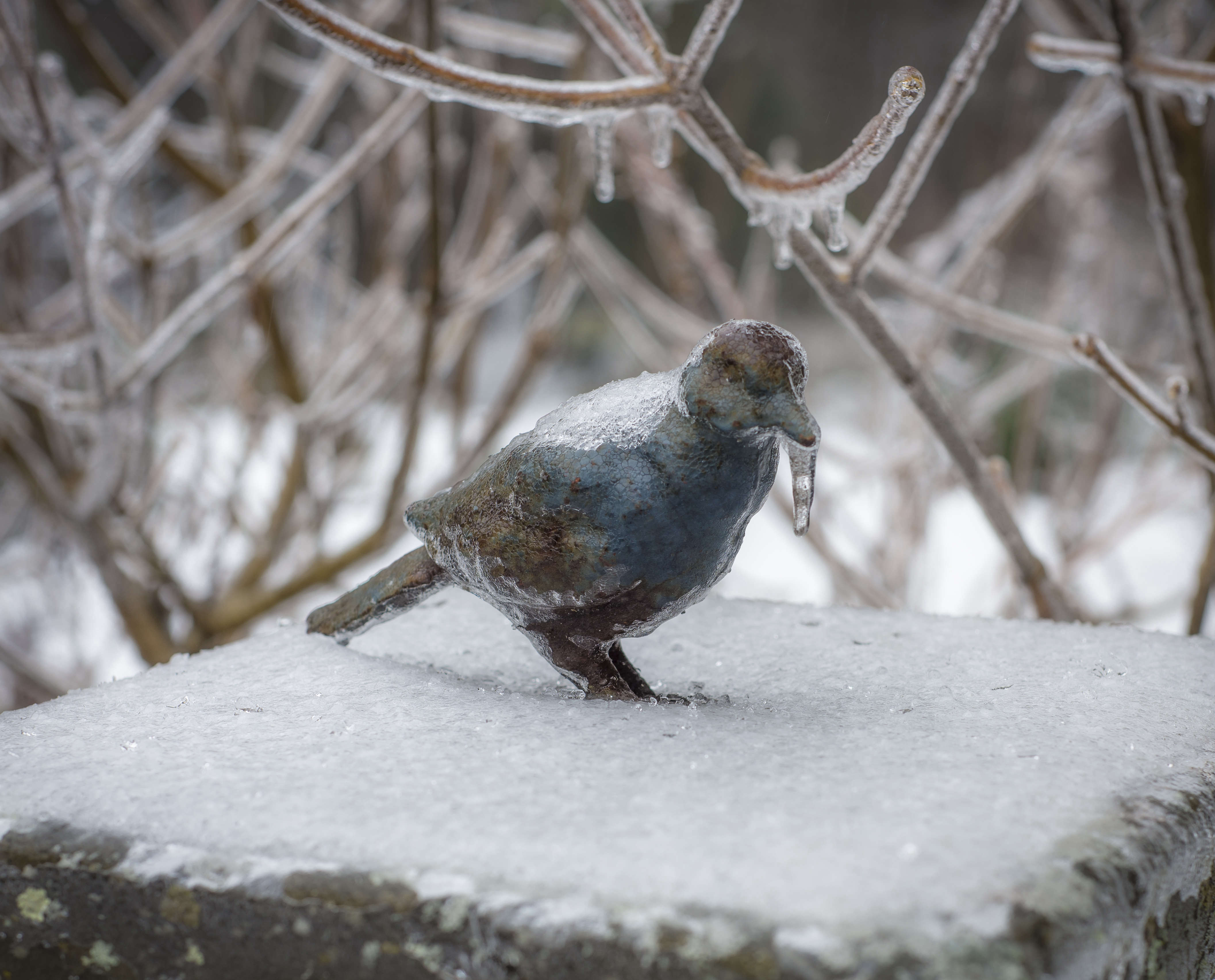 Above: Twin antique iron birds sit atop the gate posts. 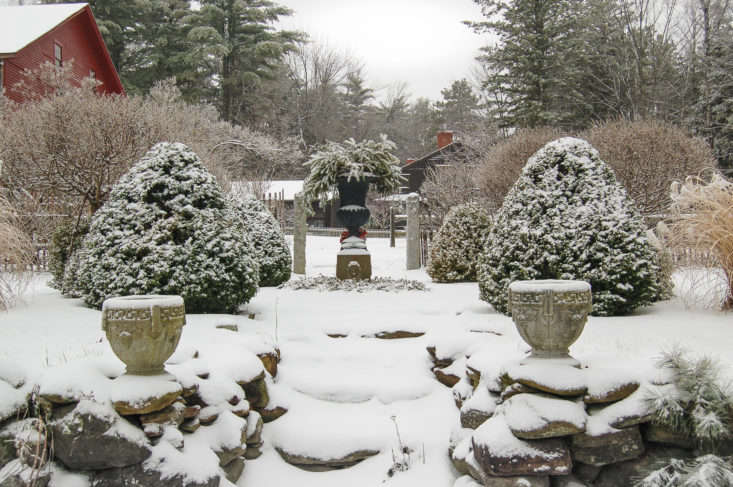 Above: “If you are facing the front of the house, this section of the garden lies to the left, across the drive,” says Valentine. 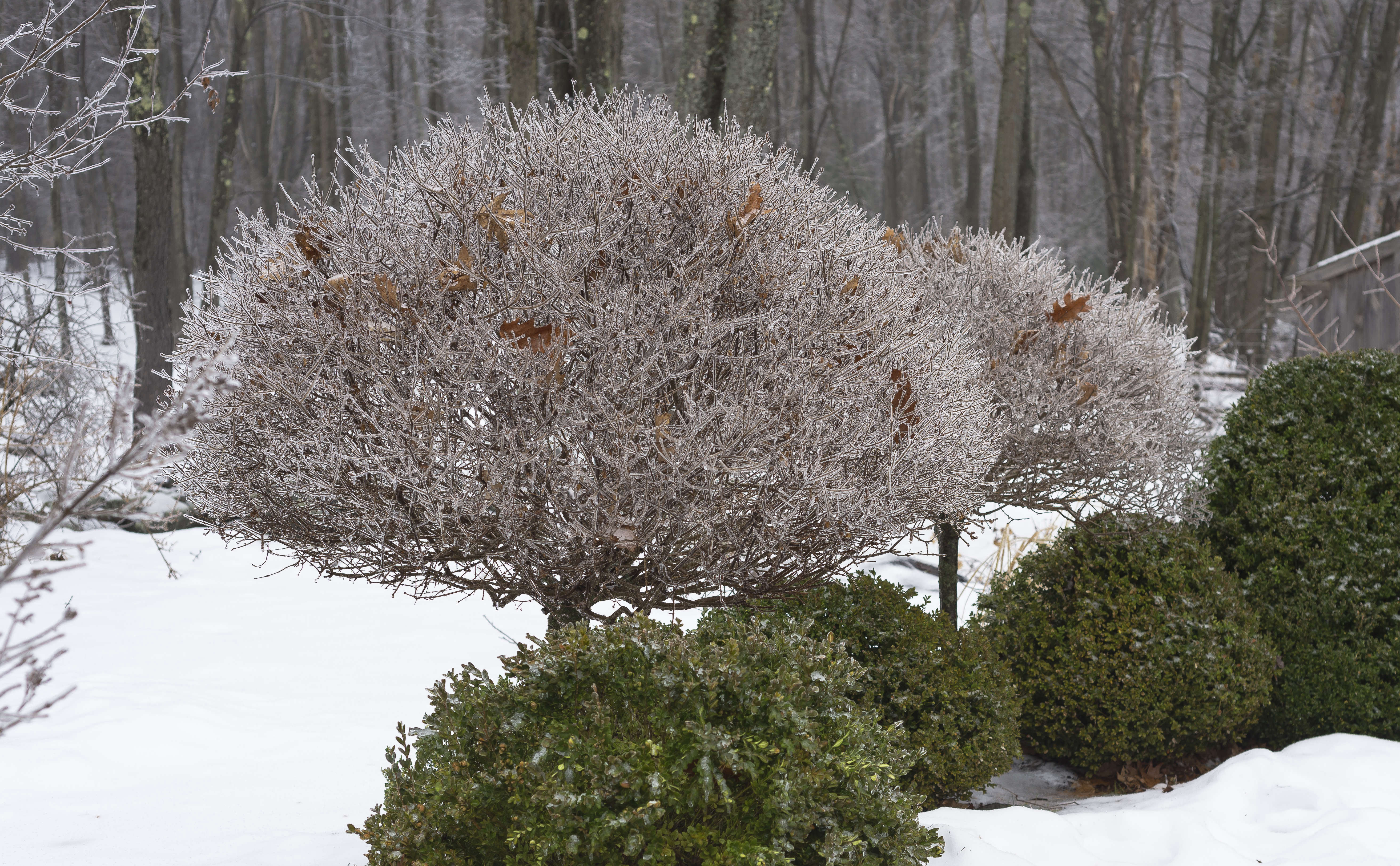 Above: Encased in ice, the Syringa meyeri ‘Palibin’ standards look like spun lace. At their feet are spheres of Buxus ‘Green Mountain’ and (at far R) is a pyramidal Buxus ‘Green Gem’.

“The best gardens evolve slowly, over time,” says Valentine. “Gardening tastes change with time, allowing new ideas to be incorporated into the garden more easily, and the education and experience of a gardener over the years can preclude design pitfalls.” 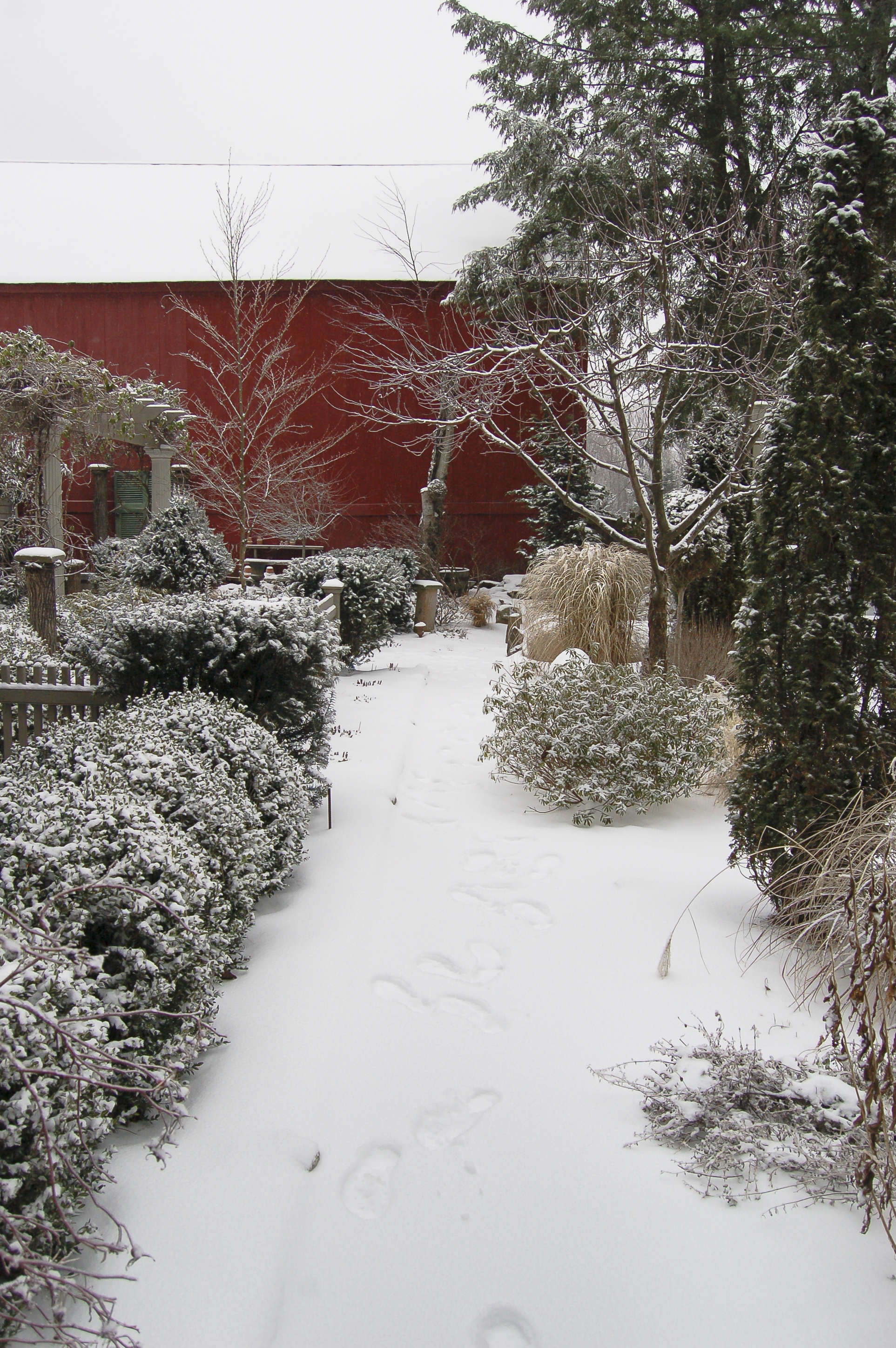 Above: The farm’s original post-and-beam barn, built around 1830, currently houses animals and stores hay. “When we first moved here full time, we raised endangered breed livestock that included sheep, goats, oxen and poultry,” says Valentine. “We still have a few livestock that we keep and a nearby local shepherd uses our pastures to graze the sheep during the summer months.” 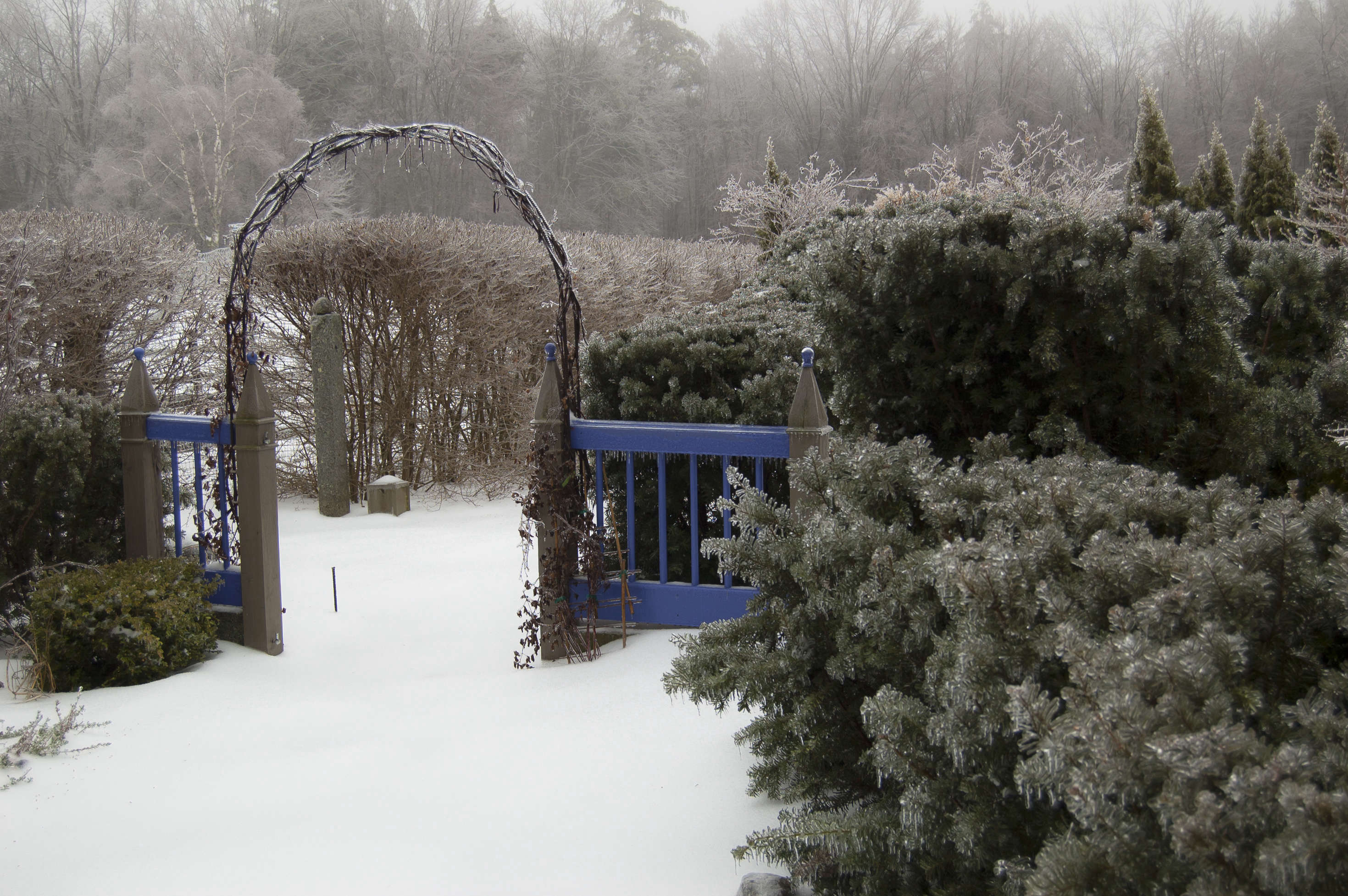 Above: An arbor built of bent Rebar “is cloaked in Clematis ‘Duchess of Albany’ during summer months, says Valentine, who modeled the arbor’s custom gate (which makes an appearance in warm months) after a gate at Castle Drogo in Devon, England and painted it a bright periwinkle to match the fence. 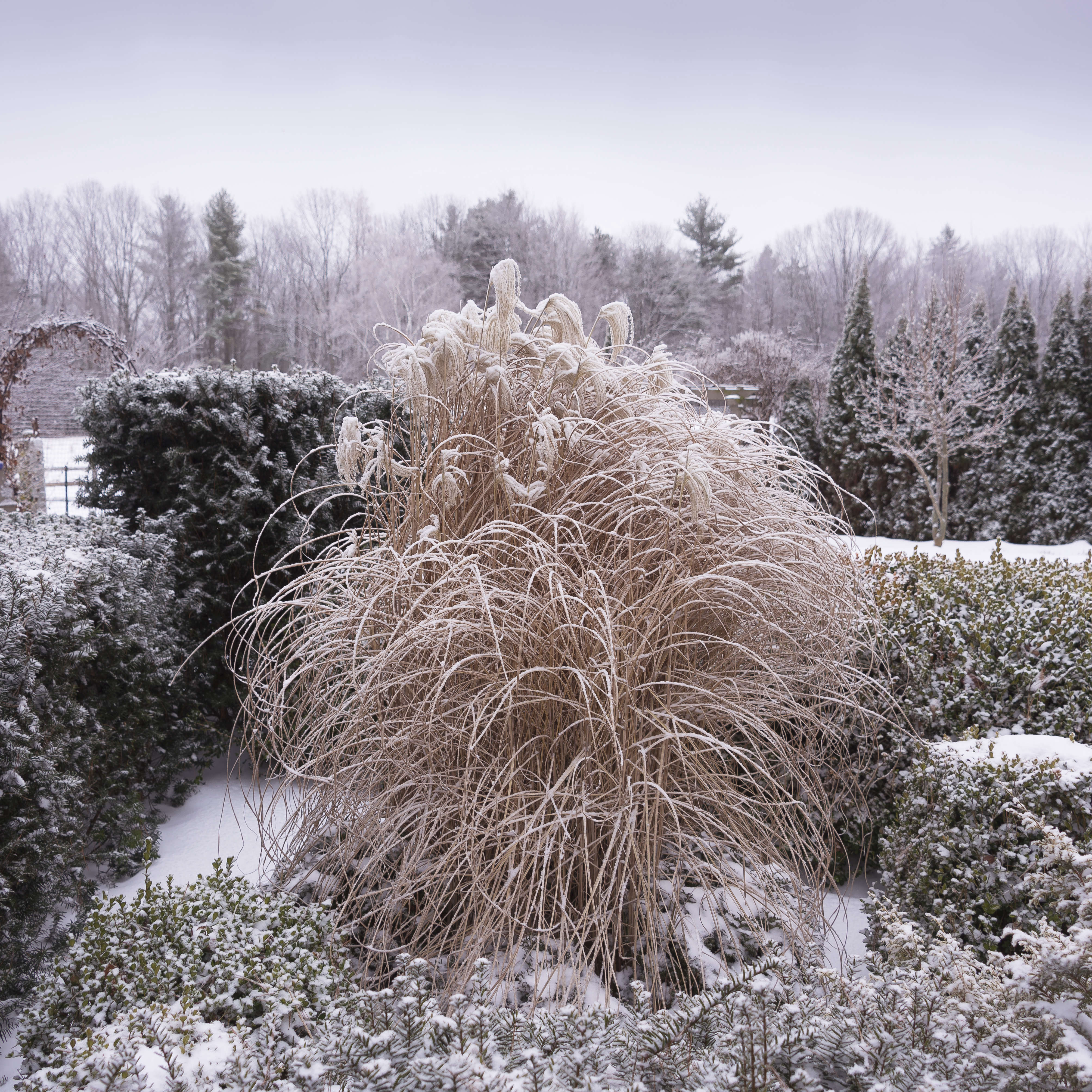 Above: Another clump of Miscanthus ‘Morning light’ “has a very delicate look during the summer with spectacular, almost metallic looking, purple seed heads in the autumn that then transform eventually into these wonderful fluffy and frothy white plumes,” says Valentine. 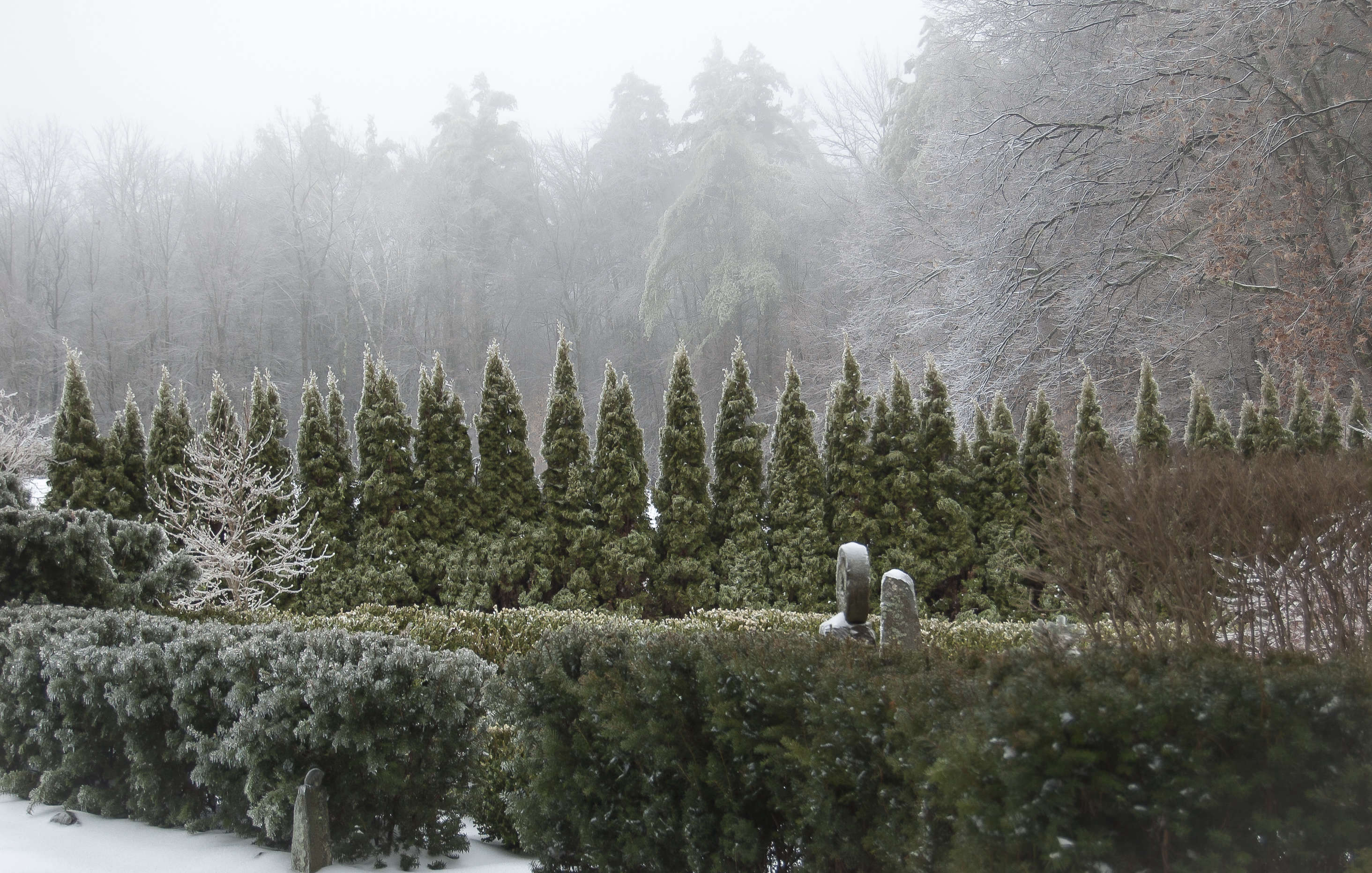 Above: Behind a stand of Thuja occidentalis ‘Smaragd’ is a formal, fenced potager and in front of them, although separated by a little distance, is the swimming pool. In front of the pool is a Taxus  hedge.

“Because the pool is not visible and you can’t actually see within most of the garden rooms from this view, the impression you get is one of layering, with the various elements of hedges and fences composing the layers,” says Valentine, who designed the trees to serve as a backdrop.

“The construction of garden rooms forces you to pay attention to transitional zones and how you move from one area to another, which helps to ‘organize’ a garden,” says Valentine. 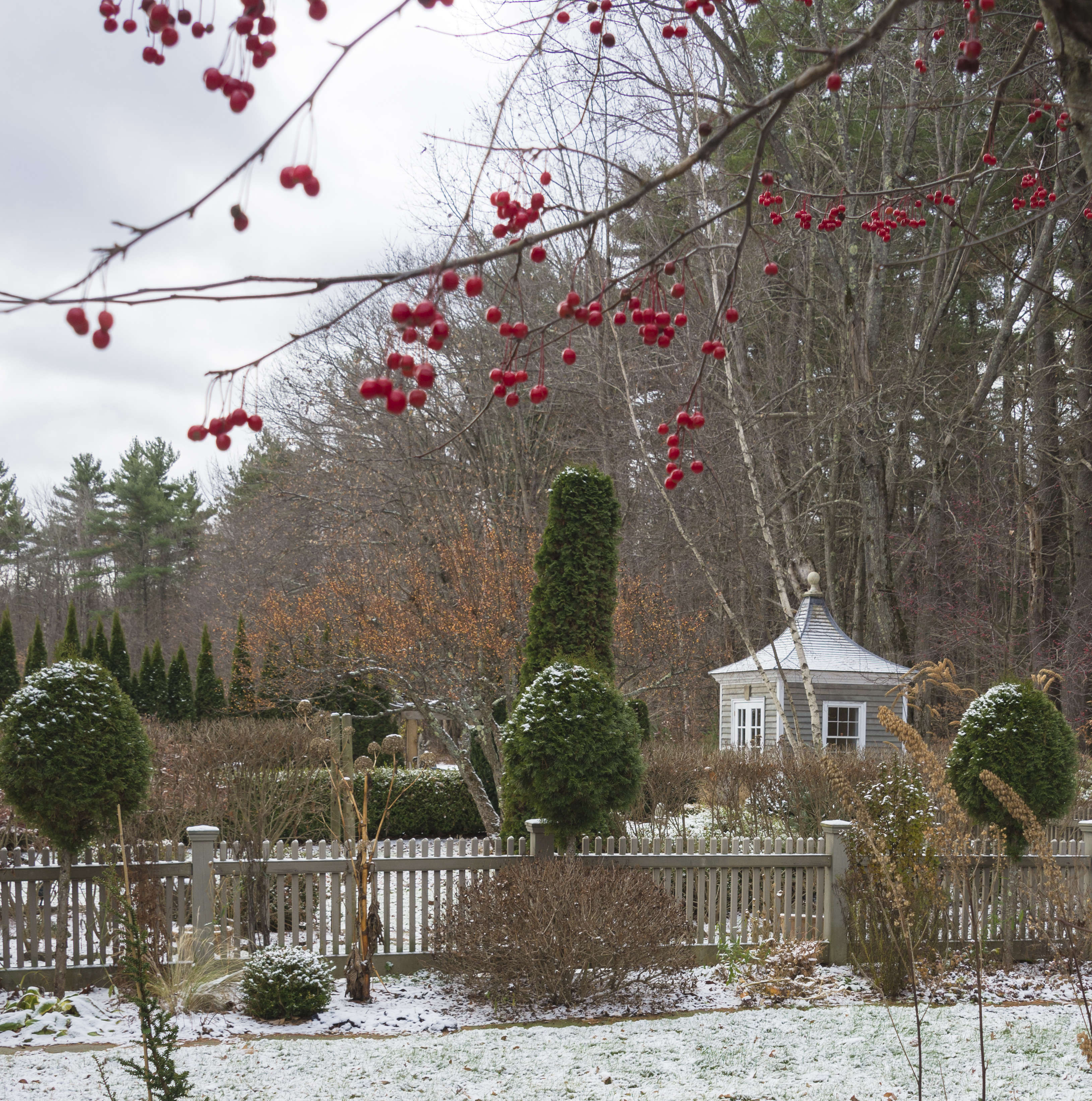 Above: In 2009 Valentine built a pool house folly (at R), “my New England interpretation of one of the twin pavilions at Hidcote, in England, that sits at the top of the stairs at the end of Lawrence Johnston’s famous Red Border.   The view is framed by branches of red crabapples hanging off a Malus ‘Donald Wyman’. 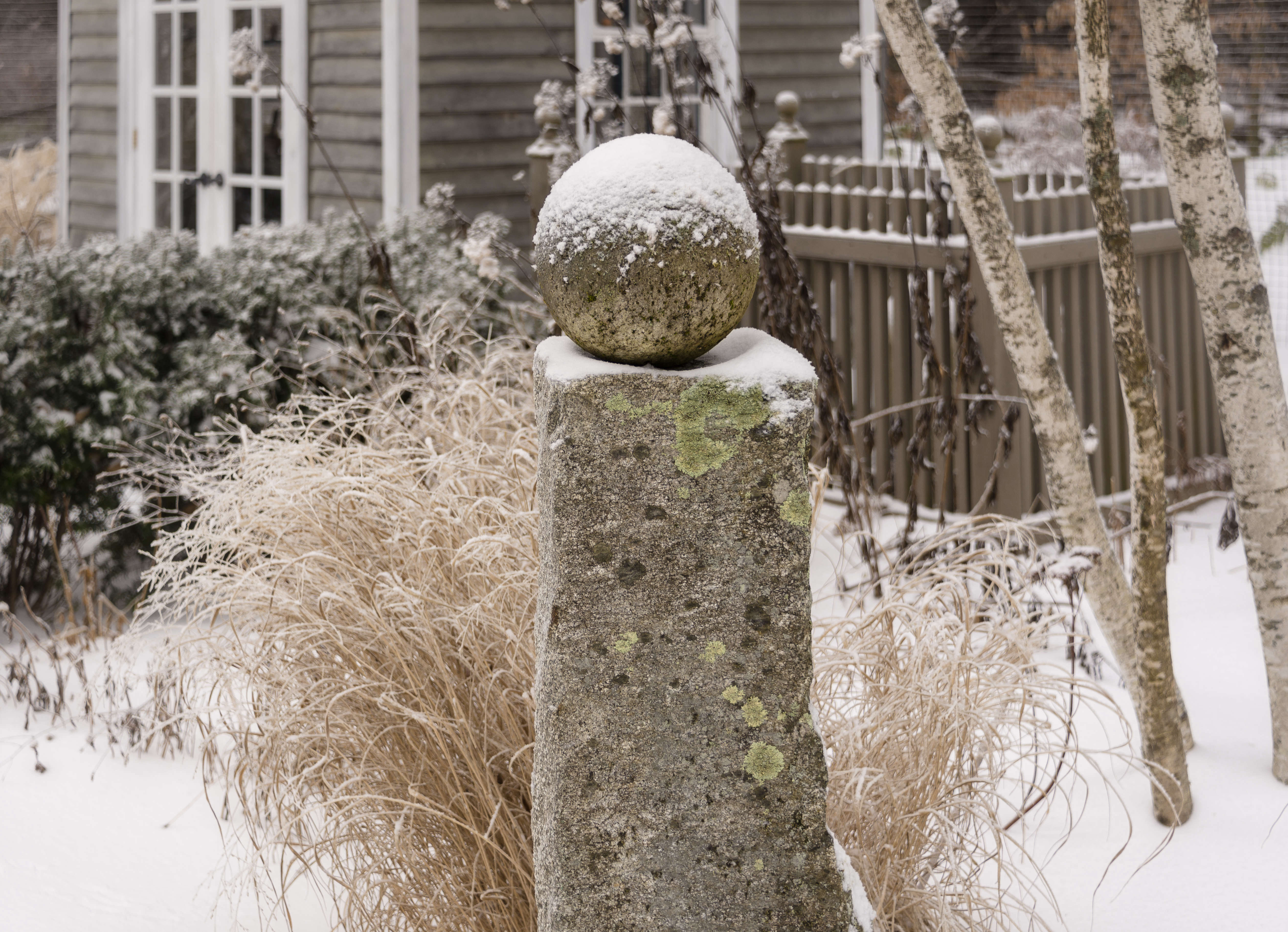 Above: Located near the Hidcote folly, a standing granite stone is an ode to “The Granite State.”  The sphere on top of the standing stone was purchased at Snug Harbor Farm in Kennebunk, Maine. 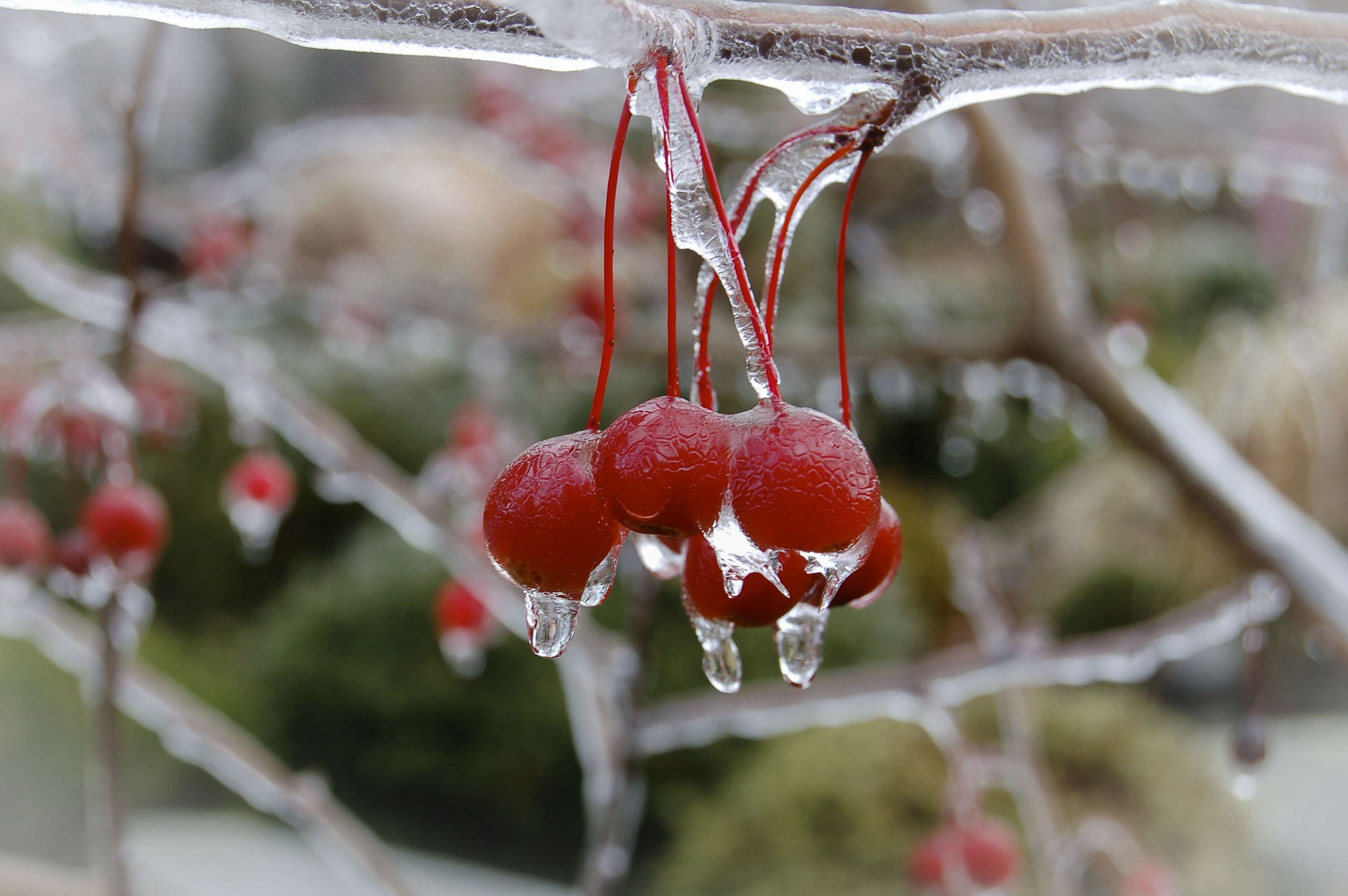 Above: “I am a big fan of using crabapples in the garden, not just for their proper scale in smaller gardens, but also for their outstanding features throughout the gardening year,” says Valentine, who has planted more than a dozen of the trees at Juniper Hill Farm. “They are beautiful in flower in the spring, some have very unique and attractive foliage during the summer and fall, and most have wonderfully colored apples that can light up a garden when you need it the most, during those long days of winter.”

DIY: Plant Your Christmas Tree in the Garden