Though I’m not one to complain about a beautiful snow fall, I’ll concede that the slippery mess that a blizzard leaves behind can make for a treacherous morning commute. As I’ve navigated the streets of my snowy Brooklyn neighborhood this week, I’ve been grateful to neighbors who have taken the time to clear their sidewalks. But with so much rock salt (and other equally dubious products) being flung everywhere, I’ve become curious about alternatives to the super-effective, but environmentally unfriendly de-icer I’ve been spotting around the neighborhood.

While rock salt (sodium chloride) is an effective treatment for ice–causing it to melt at a faster-than-average rate–it comes with a host of problems. It’s corrosive to masonry and metals, irritating to pets’ paws, and wreaks havoc on nearby vegetation. So what’s the garden-friendly approach to de-icing?

I chatted with Ronnit Bendavid-Val, Director of Gardens and Grounds at Brooklyn Botanic Garden, to see how the park manages to remove snow and ice and still keep the visitors and the vegetation safe. 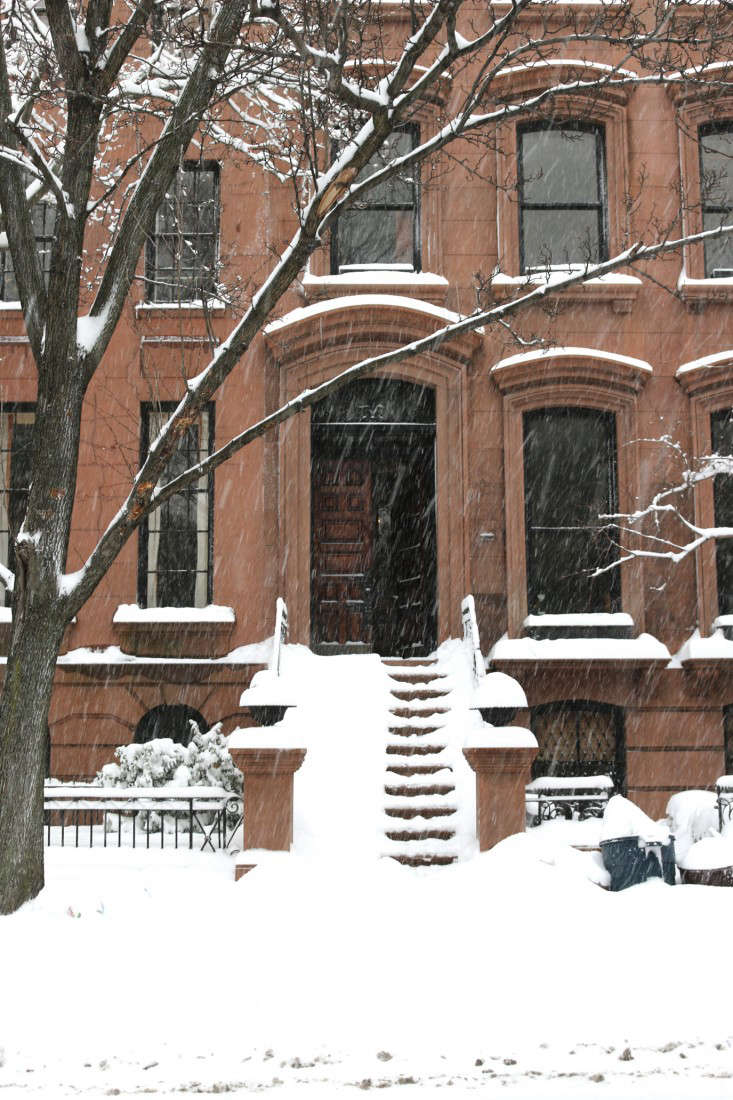 Above: Snowy steps that if left untreated can become as slippery as a ski slope. Let’s save the extreme winter sports to the Olympians.

EB: We’ve been hearing a lot about the risks of salting and sanding city streets and sidewalks. How do you manage the ice at the Brooklyn Botanic Garden in a plant-friendly way?

RB-V: The thing that’s tricky about ice is that there are many kinds of icy conditions. At the Brooklyn Botanic Garden we look each day at the specifics of the situation and have a toolkit of options for dealing with ice that depends on the particular conditions including ambient temperature, whether the ice is frozen or not-quite-frozen slush,  or an ice slick from melted runoff, whether an area is in sun or shade…

EB: When you do have to use de-icers, what do you use?

We’re also currently experimenting with a brine solution–salt that’s been diluted with water–and applied to a paved surface. This has been used by some municipalities in New Jersey and the Boston area. The advantage of brine, apparently, is that in diluting the salt and applying it this way, much less actual salt is used. This winter’s been so harsh, however, that it’s been more difficult for us to study the effects in the Brooklyn Botanic Garden. 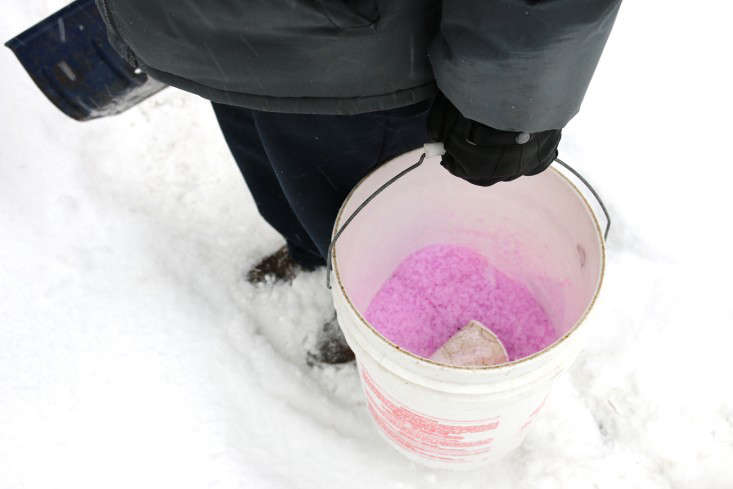 Above: Bright pink salt ready to be spread across the sidewalk in Brooklyn.

EB: Recognizing that each scenario requires a different course of action, what’s your general process?

RB-V: First, we clear away as much snow as we can, with a plow, blower, and/or brush. Then on icy patches we lightly spread some sand. Sand not only gives traction, but is a neutral addition to soil when it’s washed into plant beds, and is in fact already found in some soil mixes. Of course, we don’t use sand from a beach which has salt content, but rather clean sand procured for this purpose. 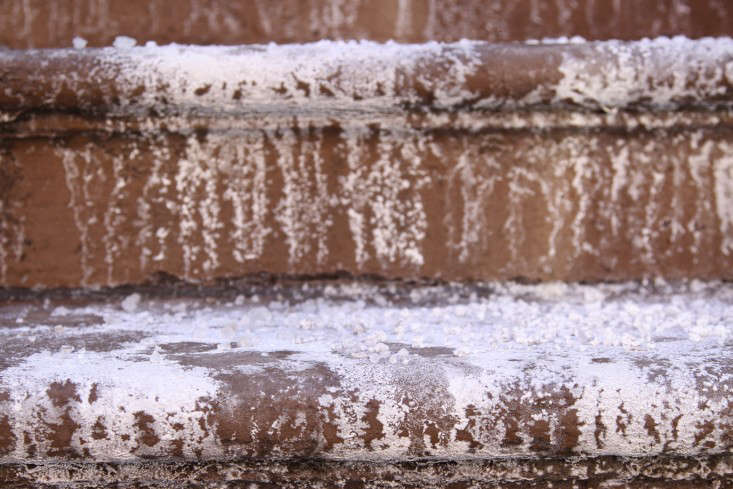 Above: Salty residue on the steps of a brownstone.

RB-V: Definitely clear away any snow before applying sand or salt. Sand is preferable to salt because it’s not harmful to the plants or soil as it’s washed away. It’s also less harmful to our rivers when it’s washed into the street drains. Another thing to keep in mind is that it’s important to clear away chunks of ice after it begins to melt, so that there’s less chance of the ice and any ice-melt refreezing overnight. 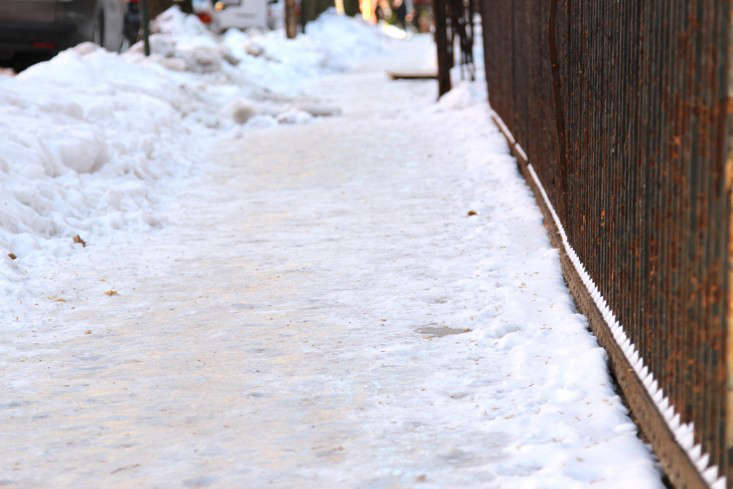 Above: An icy booby trap.

EB: I’ve been hearing about people adding other things to their sidewalks, like kitty litter and sawdust…

RB-V: I think those options get offered because they might be easier to find at the corner bodega. Kitty litter is an absorbent, but it’s mostly providing traction like the sand. Sawdust also serves that purpose. Sand is better than either, but if you have to choose between kitty litter and sawdust, keep in mind that the sawdust usually has less of an impact on trees and soil as it washes away. 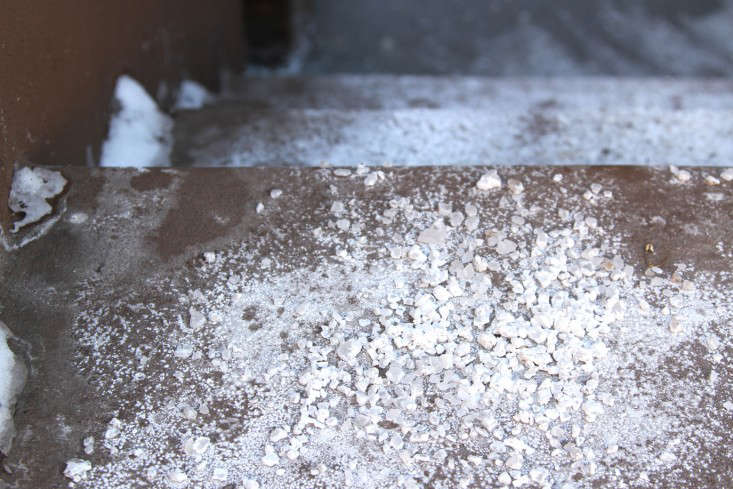 Above: A pile of rock salt on a Brooklyn stoop.

EB: If homeowners do need to use salt, is there anything they can do in the springtime to counteract the salt’s harmful effects?

RB-V: Sodium chloride, which is what the city uses to salt the streets, is extremely water soluble. If you want to do something nice, soak your tree pits with water in the springtime to dilute and wash away the salt residue.

Interested in hearing more from folks at the BBG? See Surviving a Storm: Expert Tips from the Brooklyn Botanic Garden, For Kids Only: A Hidden Garden in Brooklyn, and Uli Lorimer: Native Plant Whisperer.