The basic philosophy of Los Angeles floral artist Lili Cuzor is that bringing bits of nature inside isn’t an indulgence, it’s a necessity. And from Lili’s perspective, loose, natural arrangements at home need not be a luxury, but can instead be simple and spontaneous.

We talked with Lili about how to find, mix, and style elements from a variety of everyday sources–from the farmers’ market to souvenirs from a neighborhood walk–to create arrangements that are portraits of simple elegance and ease. 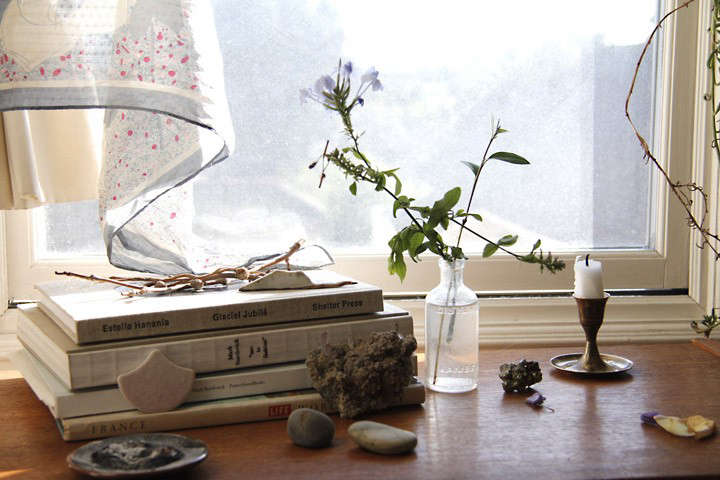 Above: Two stems picked up on a walk: an easy way to elevate a tabletop.

Lili, who grew up in France and went to art school in California, has always felt drawn to nature as both a medium in itself and as a way to unite her creative impulses with a childhood connection to the outdoors. In LA, she has created her own flexible definition of what it means to be a florist, doing work ranging from directing floral editorial photo shoots to creating giant plant installations. 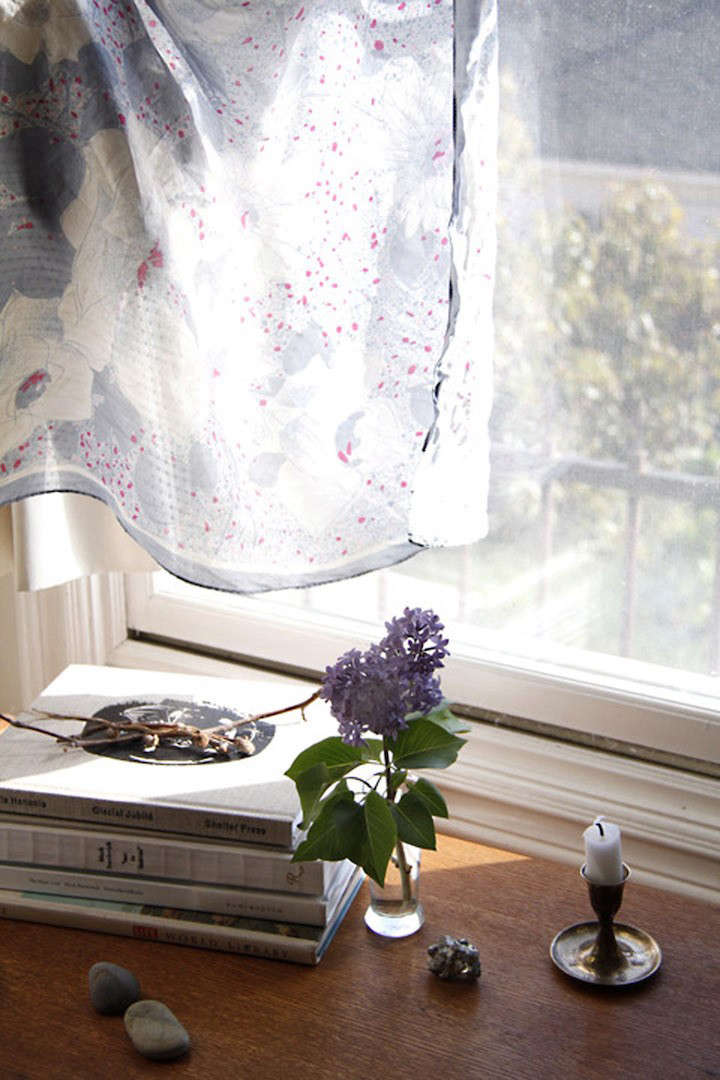 Above: One small branch of lilac–simple and unexpectedly fragrant–purchased in a bunch at the local farmers’ market for $5.

Lili describes her aesthetic as erring toward looseness; she likes to create still life arrangements that “keep flowers as wild as possible.” She explains, “I like it when there is a lot of airiness and lack of order between [each stem]. I try to use local and wildflowers whenever possible. Those are the easiest because they work for themselves. No need to bundle them tightly with others or force them into rigid shapes.” 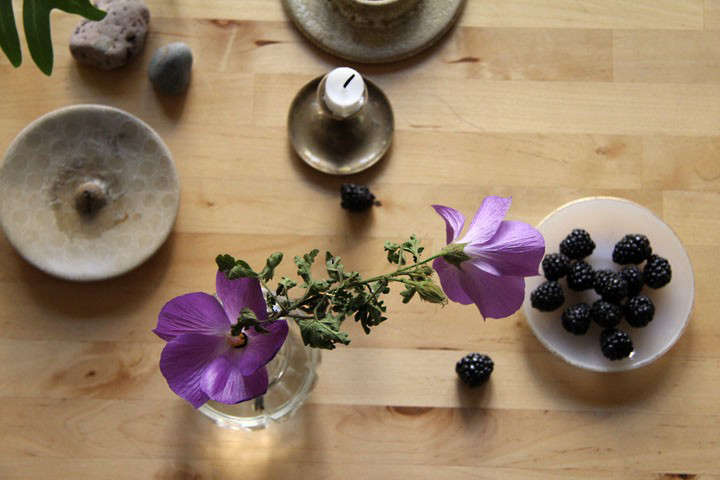 Above: Morning glories picked on a walk.

As part of her floral design work, Lili has curated arrangements for the Standard Hotel and hosted regular wildflower pop-ups at Cookbook Market in Echo Park, where every week she would spend a few hours at Silver Lake Farms picking flowers. Picking the flowers when they were in bloom meant that they would stay fresh for up to two weeks. Lili explains, “Although it was strenuous work, it was rewarding and even meditative to be in the fields… I knew the story of these flowers from beginning to end.” 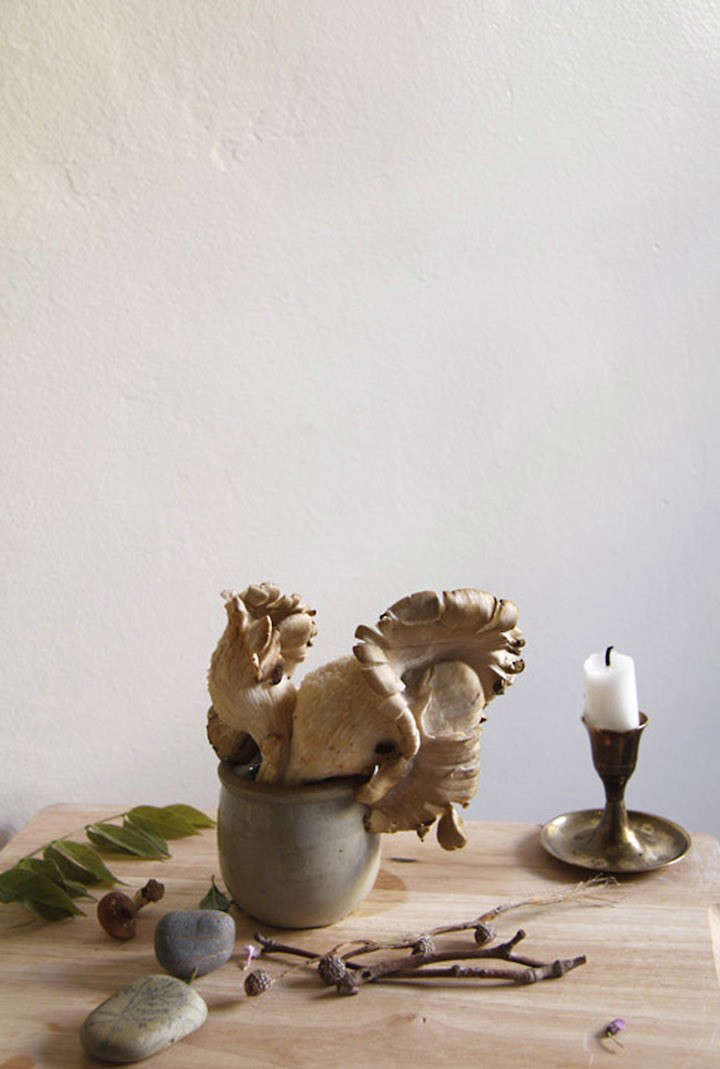 Above: An oyster mushroom arrangement.

Lili’s style errs toward the unexpected. Although flowers are often star players in an arrangement, they are not the only things that can be showcased, she explains. “One oyster mushroom–purchased at the farmers’ market–was so magnificent that I put it in a cleaned yogurt ceramic pot and left it at that!” An added benefit of using mushrooms in your own arrangements? They’ll last a long time if you change the water regularly. 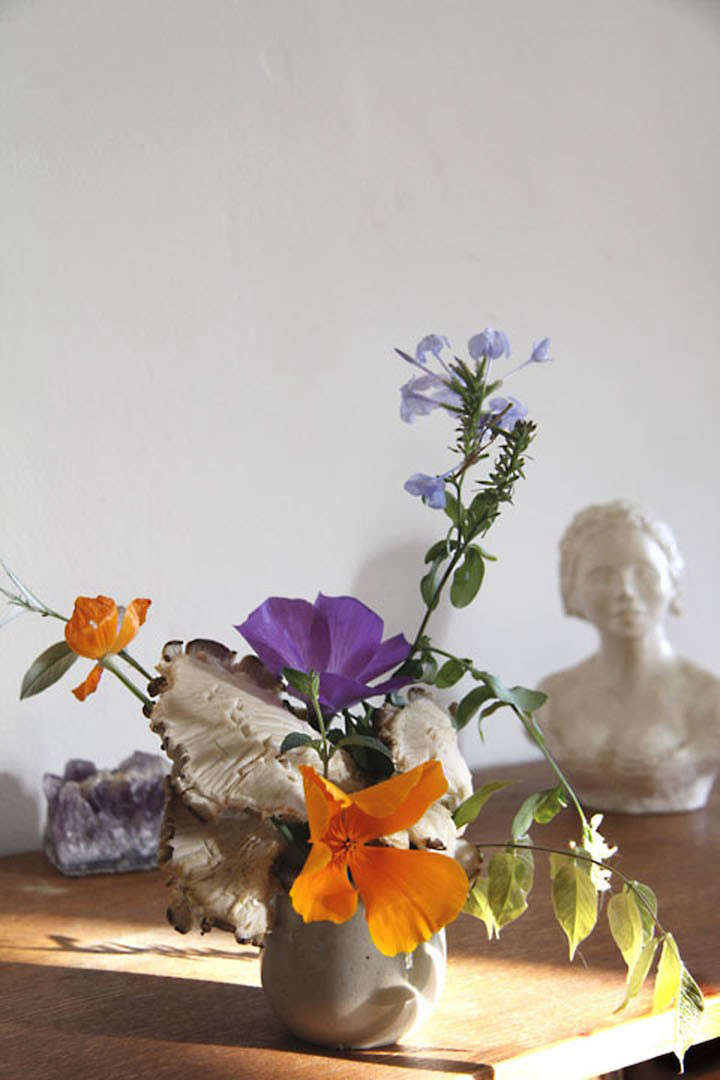 Above: The same oyster mushroom used in a different arrangement, this time with blue plumbago, California poppy, and a morning glory.

On sourcing flowers, Lili says, “Certainly someone can purchase three dozen of the most exotic flowers grown on a remote island under pristine conditions and consider that a luxury because they are expensive. However, I would argue that one could also step outside and cut a single sprig of blooming jasmine and that would be equally luxurious.”

She goes on, “In my opinion, there’s nothing luxurious in the large-picture cost that the exotic flowers have on the environment, especially if they were force-grown, sprayed, packed, shipped, and then unpacked and set up in a shop already a week old.” In general, Lili explains that she likes to work with what’s growing around her, following the motto, “keep it natural and keep it wild.” 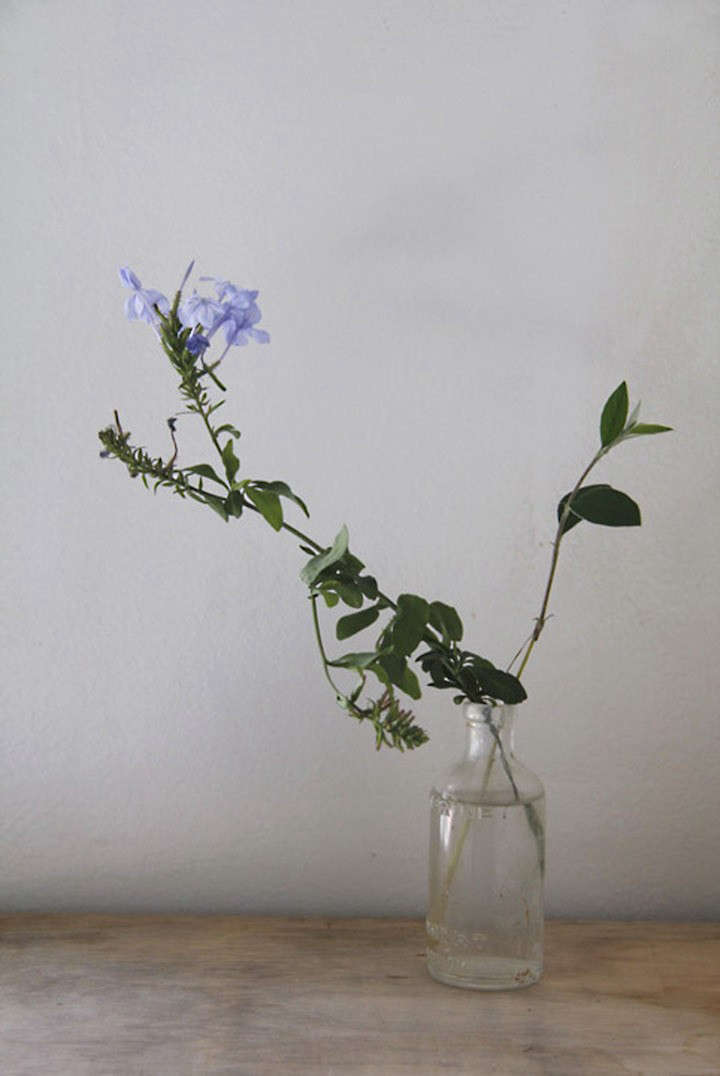 Above: Two stems in a clear glass vessel. “Two stems are perfection,” says Lili. “You can appreciate their form when left so simply.”

As another starting point for a simple arrangement, Lili suggests grabbing a few bunches of flowers at the farmers’ market to give a base of color and texture. “Then, once your flowers are in water, go out for a walk and take a moment to look at what’s around you: are there wild grasses, branches, vines, or herbs nearby? Pick a few without over-thinking about whether they will work with what you already have. When you get home lay out what you gathered and start mixing them in with the flowers.” 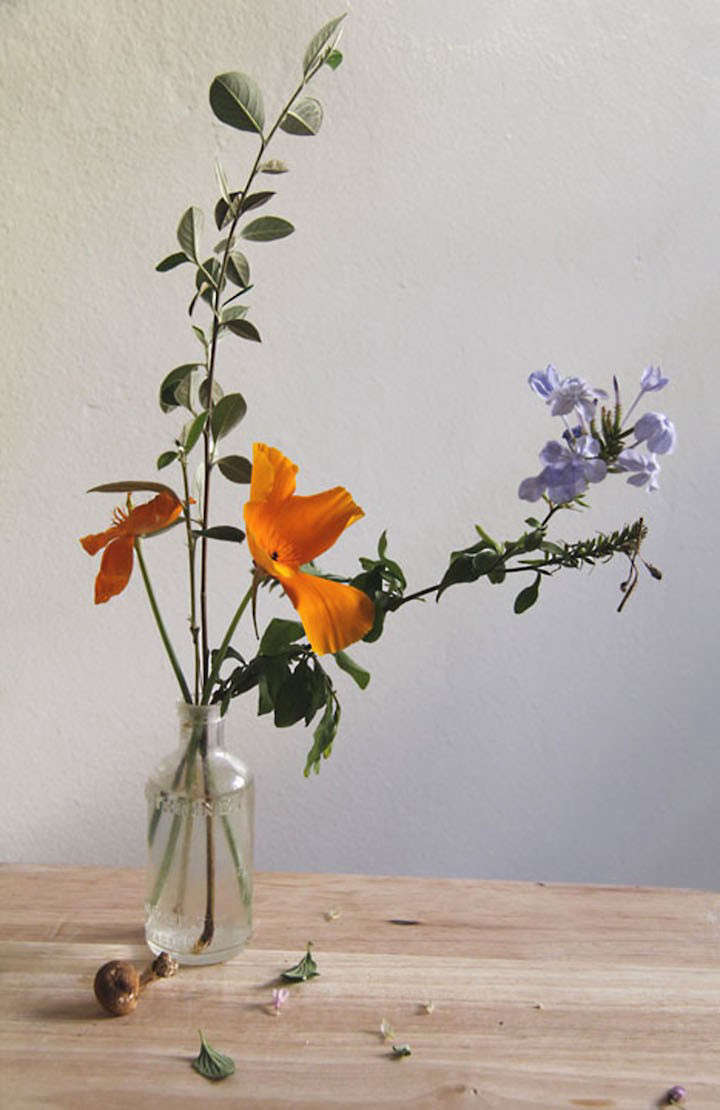 Above: When styling, Lili suggests that you don’t always have to go big. A few vibrant flowers and a green or two can make for a stellar small arrangement. Lili works from the perspective that arrangements don’t have to be perfect. She likes to consider the flow and space of an arrangement: “I always ask if some of the pieces would be better just by themselves.”

Above: A more traditional display of wild roses and lilac from the farmers’ market, mixed with California poppies and wisteria, and “found” lavender and greens. The found elements “give the roses a wilder feel,” says Lili. 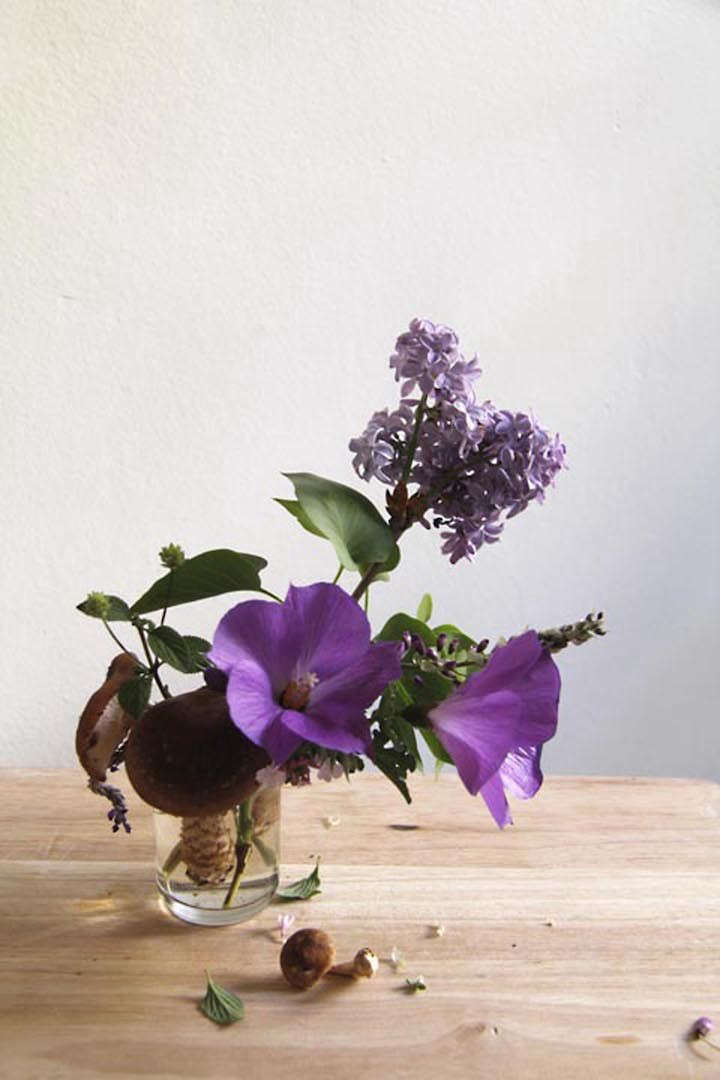 To prolong the life of an arrangement, Lili advises giving everything a clean half-inch cut from the bottom. remove any leaves that will be submerged. If you have sugar or vodka on hand, she suggests adding from 1 to 2 teaspoons to fresh water. 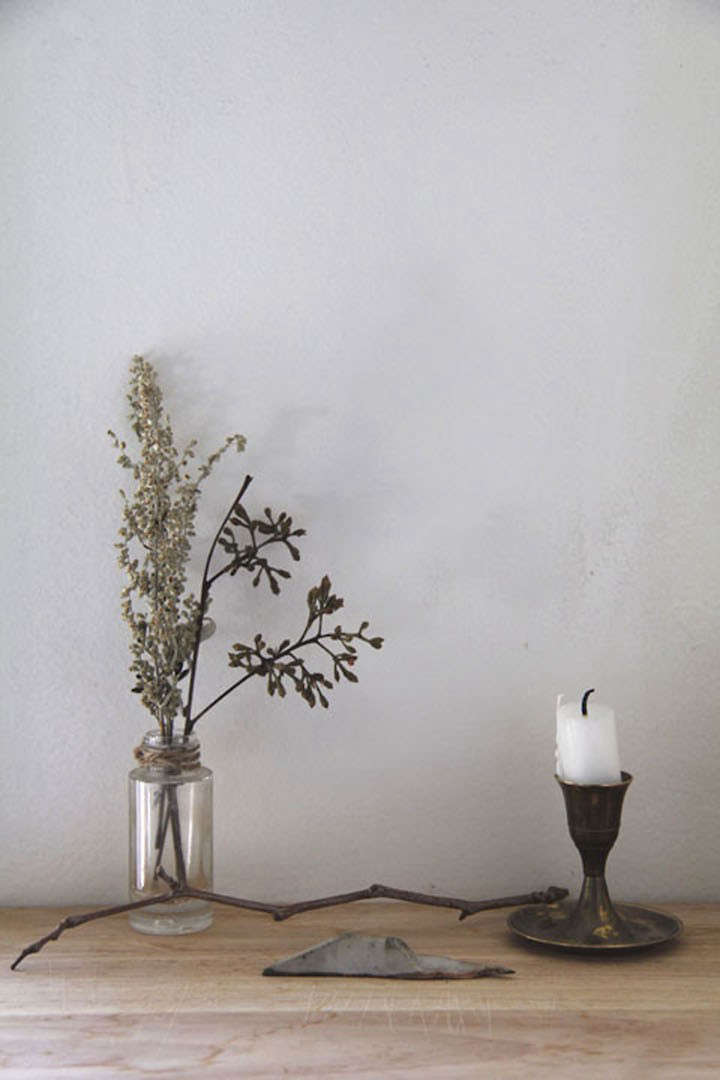 Above: A simple collection of dried eucalyptus and dried flowers makes an easy arrangement for those in colder climates still coming out of winter. Lili also encourages considering elements like rocks, bark, branches, or fallen acorns in new ways. 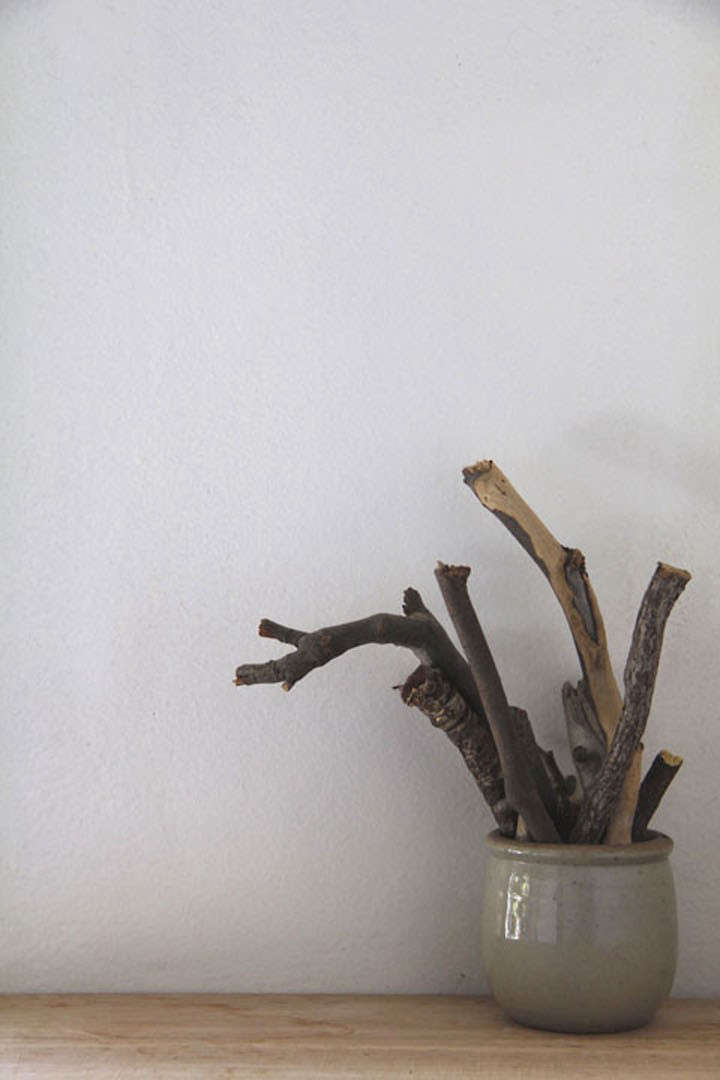 Above: A collection of small branches in a simple ceramic pot is another subtle way to keep a piece of nature indoors.

Table of Contents: Less Is More