One look at Allt-y-Bella in Monmouthshire, the home of garden designer Arne Maynard, and it is clear that here is someone with a bit of a thing about details. The pleaching, the topiary, the orangey color of the ancient house; it’s all culturally and visually spot on.

While the choice of tulips available can be impossibly confusing for most of us, it is well to take a leaf from Arne Maynard’s book. The paintings of the Dutch Masters are roughly contemporary with his house and certainly fit in with the aesthetic. So, he grows them by the door, trials them in the cutting garden and invites The Garden Gate Flower Company to share their flower arranging knowledge. 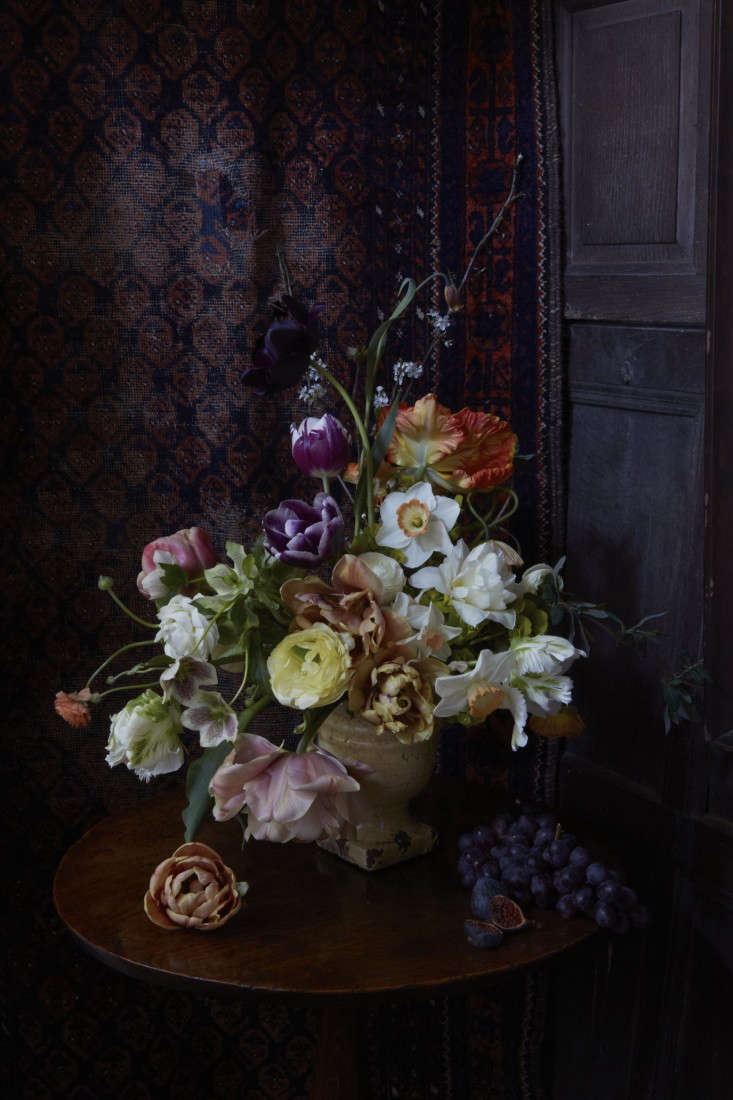 Above: Becca Stuart and Marion Parish of The Garden Gate Flower Company have a particular interest in flowers in art and they set up this arrangement as an example for the students at Arne Maynard’s HQ in Wales. It includes white and green ‘Super Parrot’; all-white ‘White Parrot’, Narcissus ‘Bell Song’. The flaming orange tulip at the back is ‘Professor Roentgen’.

When we talk about the flower paintings of the Dutch Masters, we are not normally referring to the female masters. Yet Maria van Oosterwyck and Rachel Ruysch were wildly successful painters in the second half of the 17th century, with the crowned heads of Europe among their clients (Ruysch also had 10 children). Both artists have been of inspiration to organic flower farmers-and-decorators Becca and Maz. 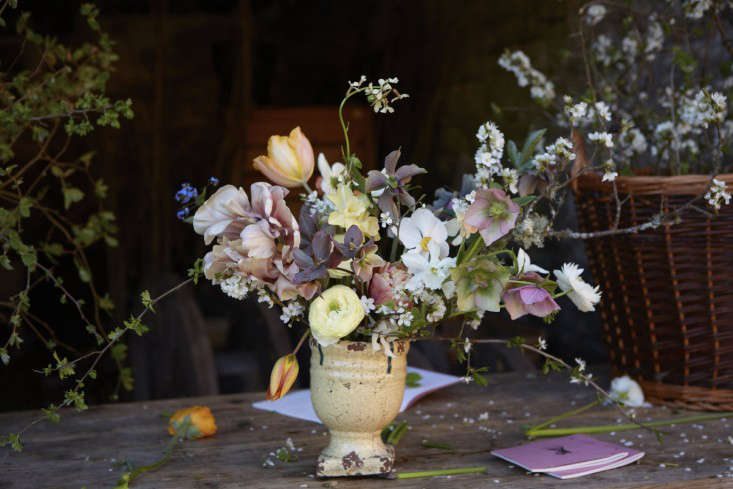 Above: The Garden Gate Flower Company frequently supplies flower arrangements to Arne Maynard and it did not take long to discover a mutual passion for a certain type of tulip. A series of workshops between the two parties was soon set up: the arranging expertise of Becca and Maz against the small-windowed interiors of Maynard’s Welsh farmhouse Allt-y-Bella, which began life in the fifteenth century, with a Renaissance-influenced tower added toward the end of the reign of Elizabeth I.

“Arne’s house was perfect for setting up still life ‘vanitas’ and flower arrangements,” says Maz. The photographer Britt and her colleague Kristy Ramage went “foraging” for dead butterflies in the curtains, using birds’ nests, old books and skulls for the full effect. 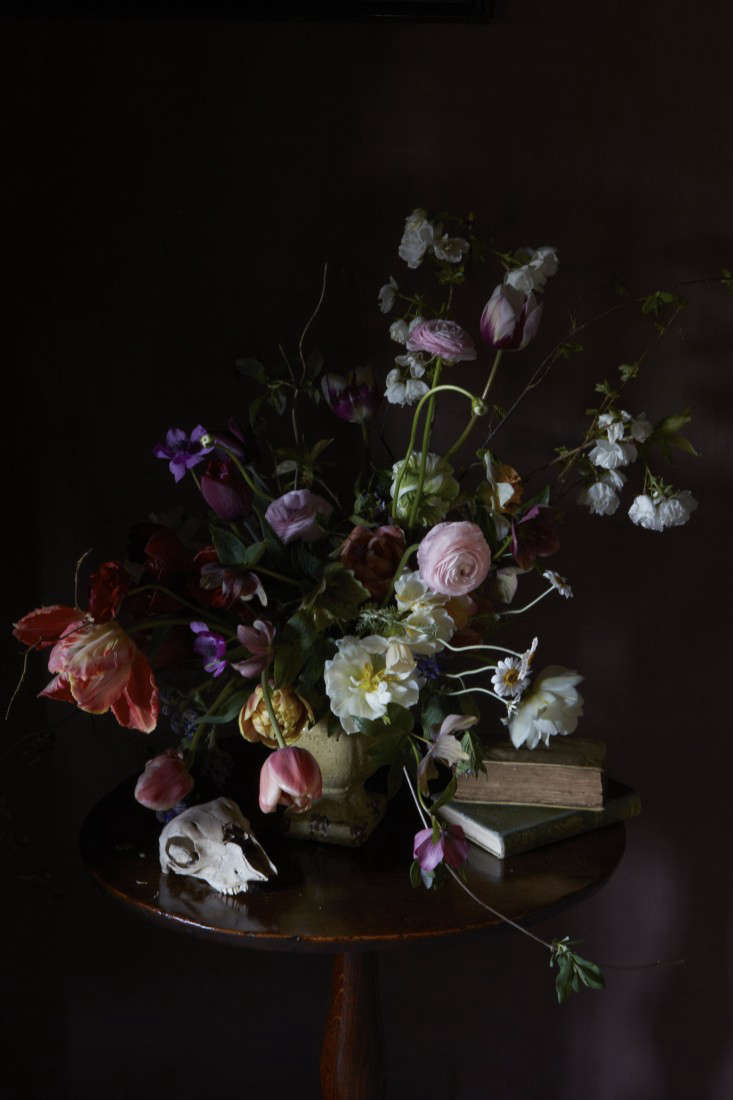 Above : The paintings of the Dutch mistresses tended to be vertical, with flowers pointing up as well as down, hiding the vase. Shown here: a student’s arrangement (as are all of the following).

Skulls and books were often employed in the low-country ‘vanitas’ paintings of the seventeenth century, to symbolize the fleeting nature of life. They were also connected with the Bible, butterflies referring to the Resurrection. 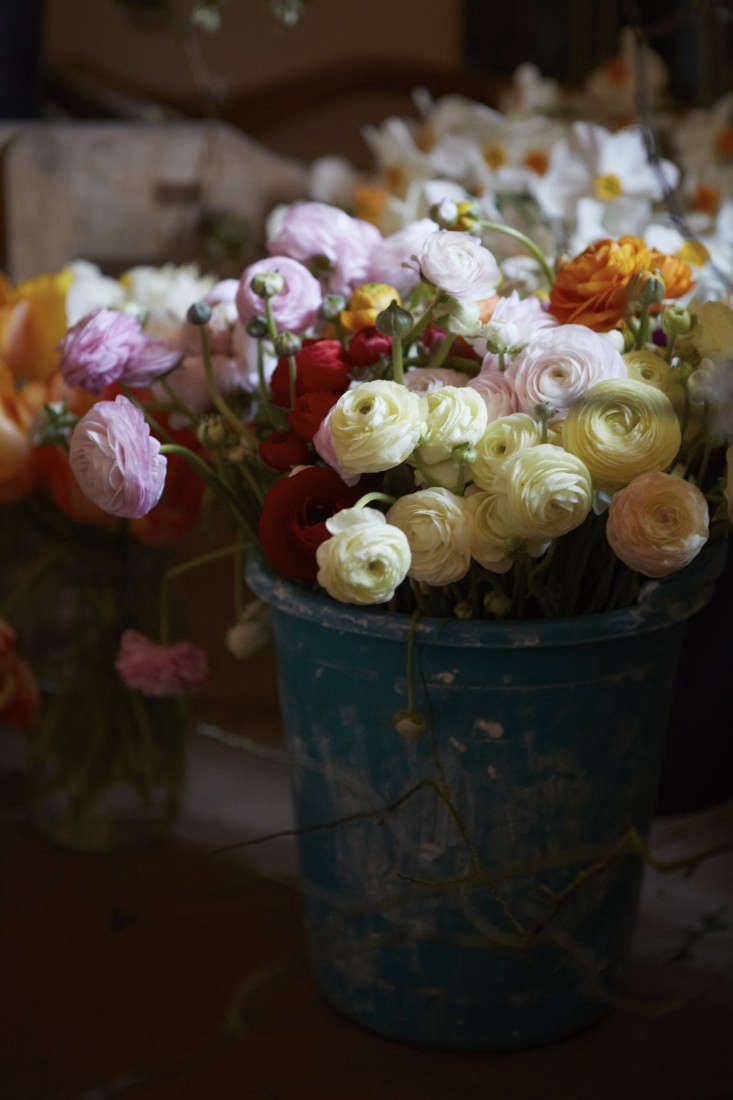 Above: Becca and Maz brought in ranunculus to mimic the shape and colors of roses. “The Dutch Masters painted over the course of the seasons,” says Maz. “They juxtaposed flowers which would not normally be seen together in a vase.” 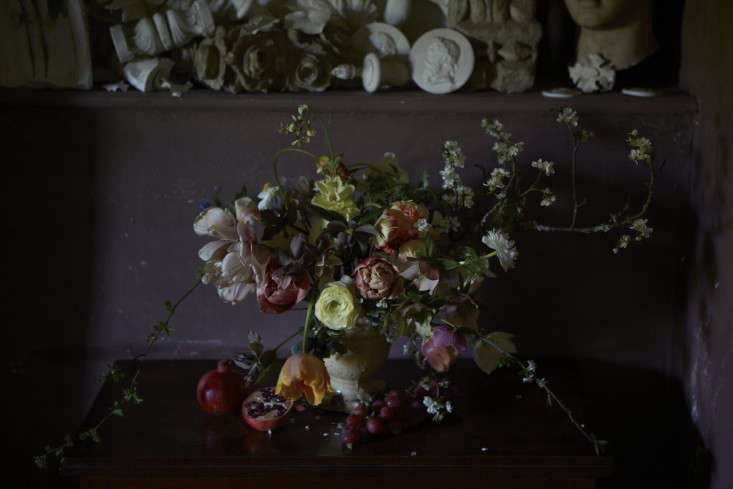 Above: Flowers with an eye are essential components of Dutch Master still lifes, after tulips. As well as ranunculus, Becca and Maz grew anemones in blue and pink, which hold their own against the strong presence of tulips. Also fritillaries: “their smokey, tonal patterning blends together the contrasting colors in a subtle but important way,” says Maz.

Arne’s collection of plaster leaves in the background are made by Peter Horne; a selection is available at Pentreath and Hall. 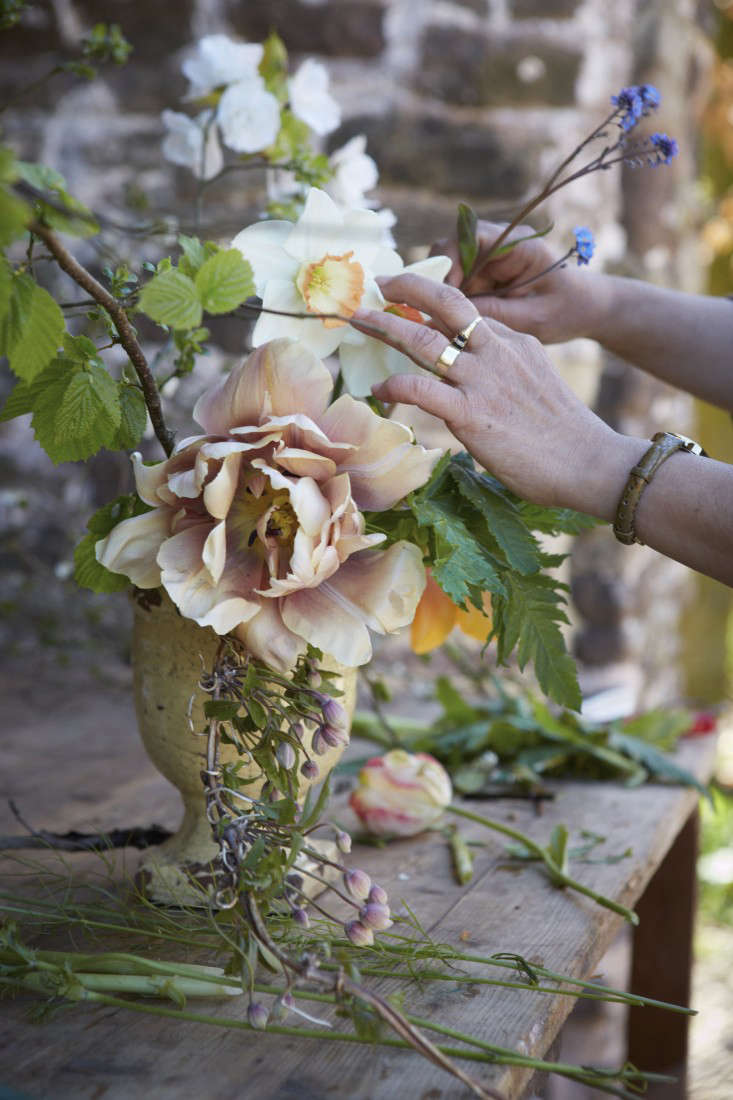 Above: An overblown tulip ‘Belle Epoque’ with Clematis montana and twigs of hornbeam.

“We try to use wild bits in creating a loose, asymmetric style of arrangement,” says Maz. “We brought over clematis and honeysuckle foliage to create twisty shapes. Blossom of damson and blackthorn came from the hedges around Allt-y-Bella, to form a basic framework from which to build up the arrangement.” 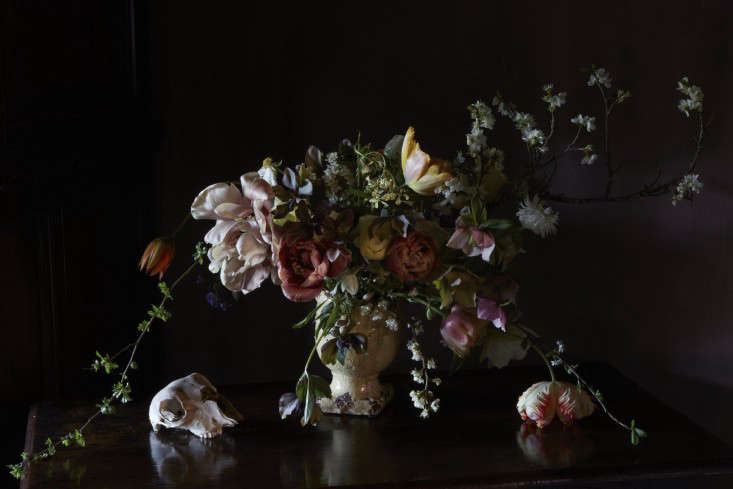 Above: Blossom and decay. Or, “Vanity of vanities, all is vanity” (Ecclesiastes). 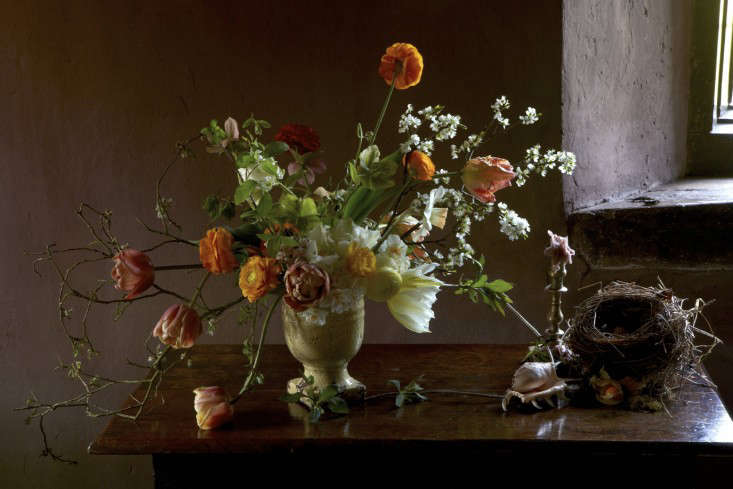 Above: Parrot tulips, low-level lighting: this much we know. What was surprising about the actual paintings in trying to recreate them? “The freedom of expression; the lack of formality, the way they valued the character of a flower in its own right,” says Maz. “As it starts to drop its petals and fade, it is shown to be just as beautiful as a flower that we think of as ‘at its best.'” 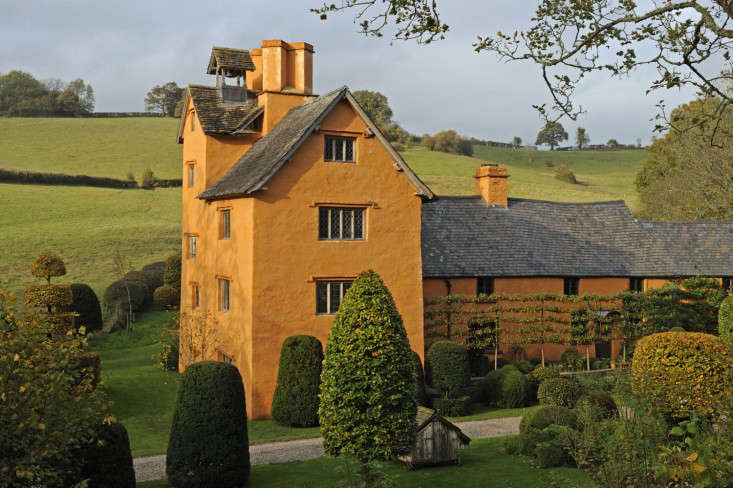 Above: Arne Maynard’s rural HQ is in South Wales, a far cry from the central London office. Allt-y-Bella offers bed-and-breakfast as well as outdoor theater in summer and an all-year cornucopia of workshops and longer courses.

The Garden Gate Flower Company will be returning to Allt-y-Bella for two consecutive festive wreath and table center workshops on December 1-2.

A new book by Arne Maynard, The Gardens of Arne Maynard, (Merrell) is published September 10, 2015. It is the first book to focus solely on his work.

Finally, get more ideas on how to successfully plant, grow, and care for tulip with our Tulip: A Field Guide.

The Gardens of Arne Maynard

Ask the Expert: Tips for Starting a Houseplant Collection