Let’s face it, L.A. is not too pretty. You have to love mid-Century in a sick, weird way not to recognize that the city is home to some of the ugliest spots in the world. I’m thinking of Melrose and Highland, say, or La Brea and Santa Monica. There’s even a Twitter feed called LA’s Ugliest Intersections. Now, often I like L.A. very much: blue skies, palm trees, the Paramount gate, scent of jasmine, lavender evening light… But the rest of the time, living in L.A. is like substance abuse: it’s bad for you, at heart you don’t want this to be happening, but somehow, everyday, you find yourself still locked into it.

Sometimes I want out. I want to rest my eyes on something that is not modeled after the soulless 1950s, something that’s not avocado green or institutional orange or shaped like a kidney bean and made of plastic. I want freedom from the daily asphalt. I want to escape from the fierce and changeable god of the 405 and get into some deep, raw nature.

Oddly my escape from the rule of macadam begins by driving north on the freeways for six hours. And this, only to end up on a narrow span of highway that vaults precariously over the pounding Pacific Ocean, and then winds and winds around hairpin turns over oceanside cliffs so steep you have to avert your eyes in order to believe you’re not going over. You’ll recognize in this a description of California Highway 1, if you’ve been on it — even just once.

Oddly my escape from the rule of macadam begins by driving north on the freeways for six hours. And this, only to end up on a narrow span of highway that vaults precariously over the pounding Pacific Ocean, and then winds and winds around hairpin turns over oceanside cliffs so steep you have to avert your eyes in order to believe you’re not going over. You’ll recognize in this a description of California Highway 1, if you’ve been on it — even just once.

But fear (the kind that doesn’t end in death) offers release, and for me the high drama of the car trip from L.A. to Big Sur is an integral part of my annual rehab.

Photography by Amy Wilentz, except where noted. 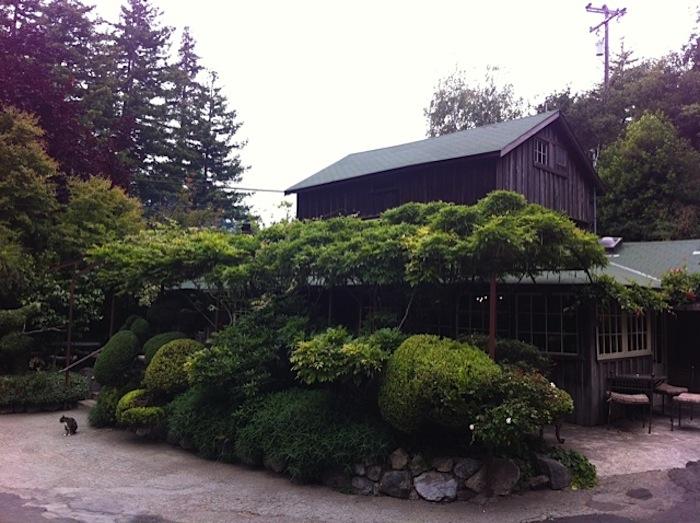 So far we haven’t died on the road, and eventually we arrive at Deetjen’s Big Sur Inn. Because I’m so keyed up from the excitement and terror of the coastal route, the colossal peace of the Big Sur coast acts on me like a sudden injection of tranquilizer. 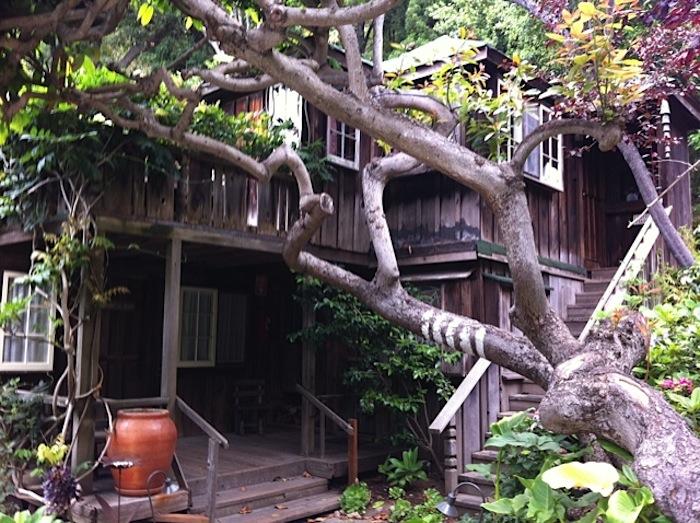 We stay at Deetjen’s first of all because it’s beautiful; it’s on the National Register of Historical Places. Its arrangements and its architecture all summon up an old California of postal routes and grizzled hermits, of mining towns in the 1880s and later, of hippies and artists living way off the grid. It’s beautiful in the way most things made by man in Big Sur are beautiful: slapdash, cobbled together, unplanned, slammed up against the mountains and redwoods and facing the sea not far away. 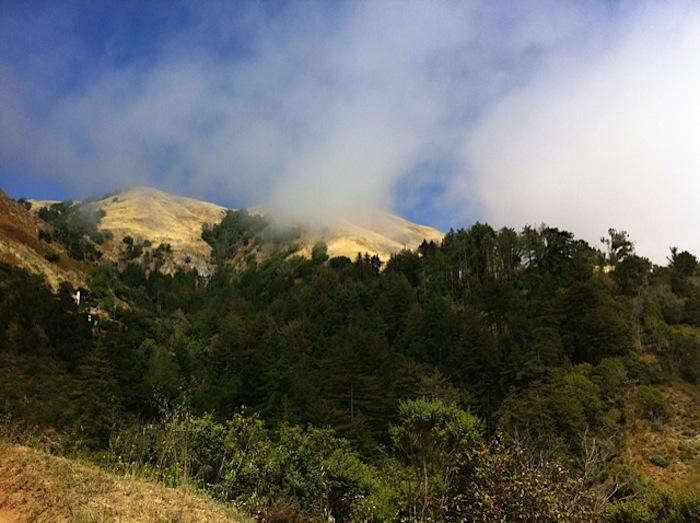 Above: The view on the hike behind Deetjens.

I also stay at Deetjen’s for the guest books. These are books dating back to the 1990s and sometimes earlier that guests are supposed to sign. But Deetjen’s guests never do exactly what’s expected. Instead of just signing and saying, “Great spot!,” they wax on for pages. There are themes in these books.

One theme is that people come to Deetjen’s to have sex, which is a funny thing, considering everyone can hear everything, but maybe that’s the appeal. Another is that Deetjen’s and Big Sur are places of spiritual renewal, which sounds flaky, especially when surrounded on the page by little hearts and lipstick kisses. Many entries combine these two themes. “Beloved” is a favorite word. So is “faith.” Other writers work on a more material level, discussing Deetjen’s food (very good), or the flowers and trees of Big Sur (very impressive) or the overheard sexual and bathroom activities of their neighbors (also impressive). Snoring is a big theme. So is flushing. So are squealing and moaning.

My favorite entry of all time, however, went something like this: “This place sucks. No bar, no phones, no wireless, no service, no television, no spa, no action. We’re out of here. Brad and Tammy, Fresno.” 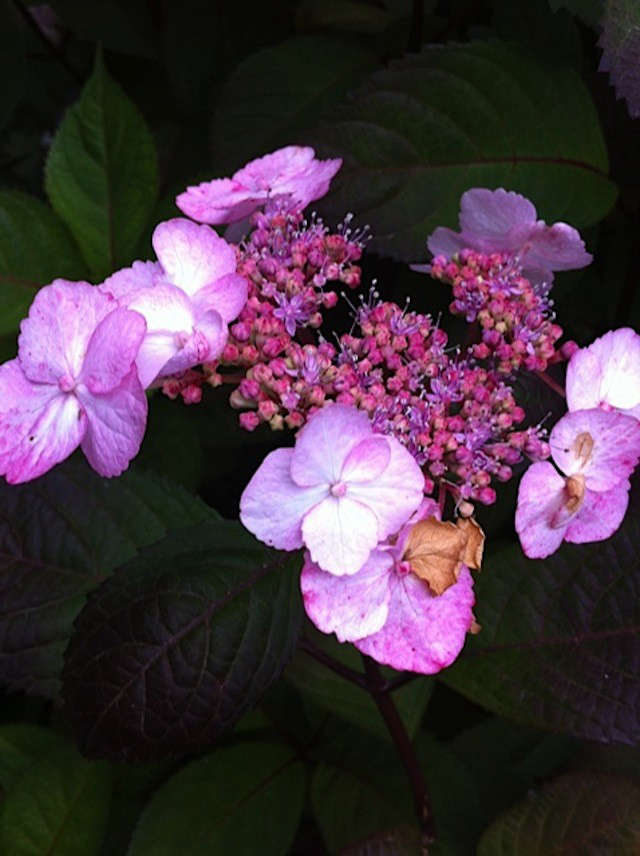 Above: Lacecap hydrangeas at Deetjen’s.

Brad and Tammy couldn’t have summed up more succinctly why Deetjen’s in Big Sur is the ideal place to escape.

One other thing: the Esalen Institute, the historic New-Age hippie retreat, is only a half an hour down the coastal road from Deetjen’s. You can book a day visit to look at the grounds and the magnificent vegetable garden, and then go for a massage. This entails getting there early and soaking in the sulphurous hot-spring tubs that hang out over the Pacific (nude, did I mention? The faint-hearted can wear bathing suits). You can whale watch while your skin softens and your mind goes blank. If that’s spiritual renewal, I’m in favor.

I can’t think of a better solace for the personal, cultural, and physical wounds that LA inflicts than these tubs… and the massage that follows. Some more memorable massages have included swaddling, lullaby humming, ear-blowing, and most famously, the masseuse ending up beneath the massee. 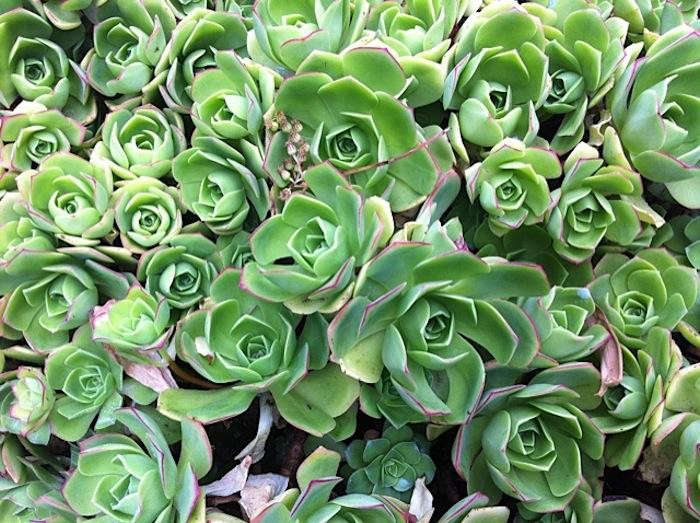 Above: Rock roses at Deetjen’s.

Some of the massage associates – or whatever they are called – are beautiful young hippies from France and Amsterdam. Others are local mothers. I once had a masseur at Big Sur who looked suspiciously like the toothless, bewhiskered man I used to see working a corner near a church in Hollywood. Was he actually the guy? I can never know. But although he reminded me of the cares and anxiety of the big city, he worked his wonders, and an hour later, I ended up renewed and spiritual, to say nothing of trembling and ecstatic, and wondering what would be on the menu for dinner at Deetjen’s that night.

Gift for the Gardener: A Hard-Working Stool

Rethinking Jasmine: The Perfect Vase for a Fragrant Flowering Vine