Dan Pearson has been designing gardens since kindergarten, and in adult life he has embraced the opportunity to shift landscapes (the Tokachi Millennium Forest in Japan) and create new ones in odd places (a planned garden bridge in London). So it was no surprise when he moved boulders from Derbyshire to London on flatbed trucks in order to create his Chatsworth garden at the 2015 Chelsea Flower Show last week, delighting the critics, mesmerizing visitors, and winning a gold medal.

Building a garden for Chelsea was not a particular ambition for Dan Pearson, whose studio in Waterloo, London, attracts international clients with big ideas. However, the sponsor (Laurent-Perrier) was very persuasive, enabling him to work with the legacy of legendary head gardener-turned-eminent-Victorian Joseph Paxton to revitalize a part of Chatsworth that is unusually human in scale.

The genius of Pearson’s space was that while existing within the artifice of a well-known flower show–visited by around 160,000 people in less than a week–it managed to look completely natural. A little triangle of calm below the BBC outdoor studio.

Despite the plastic hoardings and all the busy-ness, this appeared to be a piece of ungardened landscape. The unlikely sense of peace within was a lesson for those of us who are merely trying to escape noisy neighbors. If you can’t manage boulders, think about trees.

Any doubters as to whether this was a proper garden (or in fact a piece of borrowed landscape) need only have looked to the planting of exotics, such as the candelabra primula. Not only are they perfectly suited to the boggy conditions of a stream, their ancestors also would have traveled from the Himalayas via the great Victorian plant hunters. Grand estates like Chatsworth were the natural homes for unusual findings, and Joseph Paxton and his boss the Sixth Duke of Devonshire were keen plant hunters themselves. 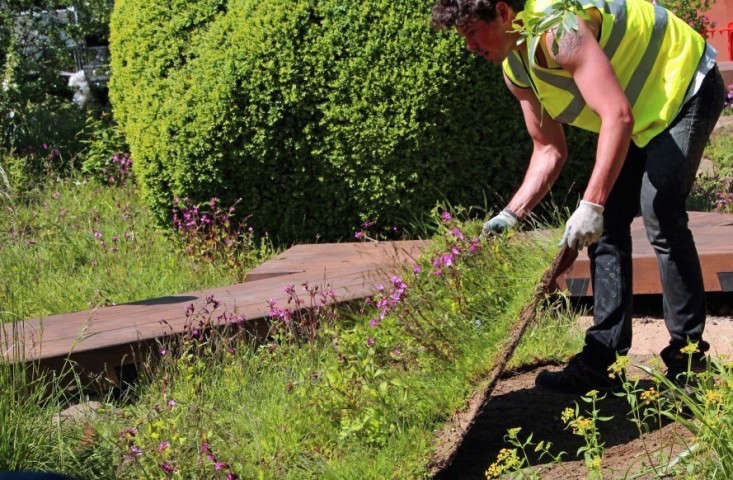 Above: Photograph via Wildflower Turf.

During the week before the show’s opening, huge racks identified this Chelsea garden; on each shelf was a large mat of turf from Wildflower Turf. Grown with either campion, or a wider mix of wildflowers including daisies, the turves were ready to pull down, roll up, and roll out. These are the kinds of flowers that spring up after being rolled up like a Persian carpet. 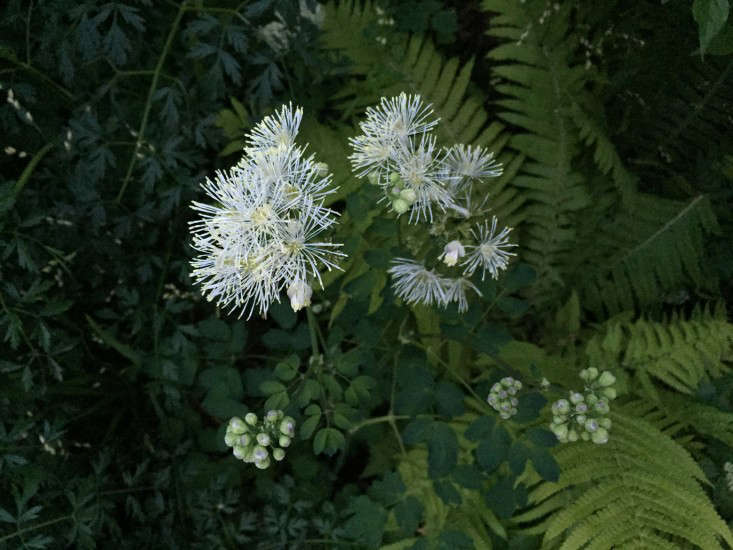 White thalictrum brightened up the layers of green, its foliage mixing easily with ferns and grasses. 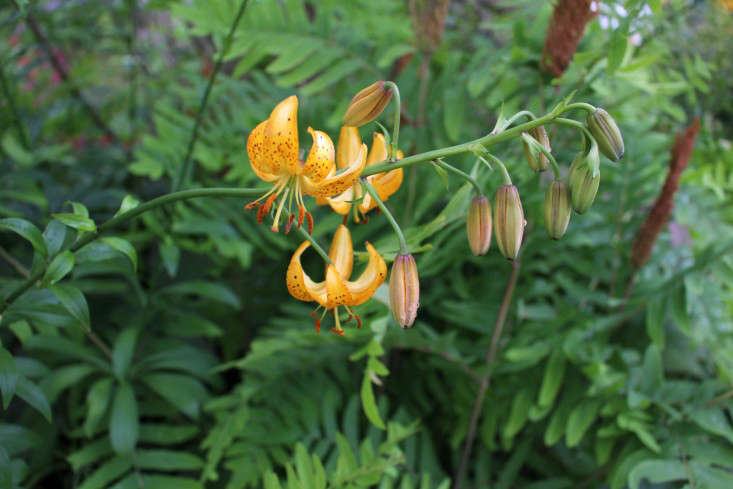 Its common name of ‘Turk’s Cap Lily’ reminds us that the martagon lily has only been here for a few hundred years and is more commonly seen in continental Europe. Seen growing among the woodlanders in Beth Chatto’s garden, it brings glamor to an unpretentious setting while naturalizing with other homegrown friends of the shade. 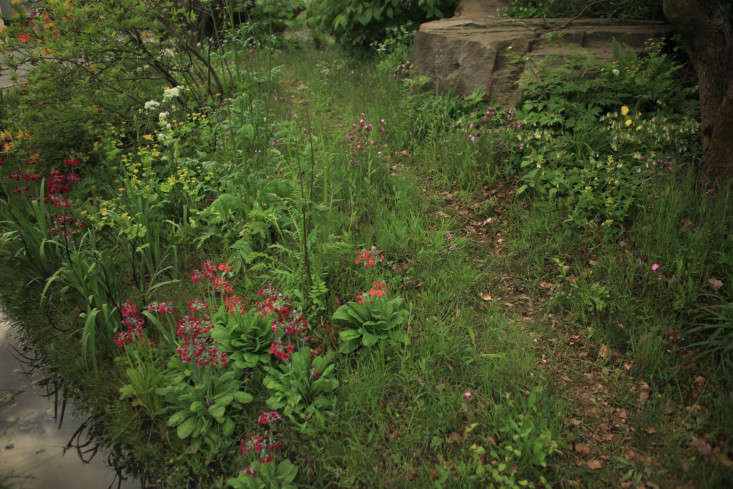 Boulders. “It’s not about replicating,” says James Alexander-Sinclair, one of the judges who nudged Pearson toward a gold medal. “It’s about seeing combinations that work, including rocks piled up in a certain way.” 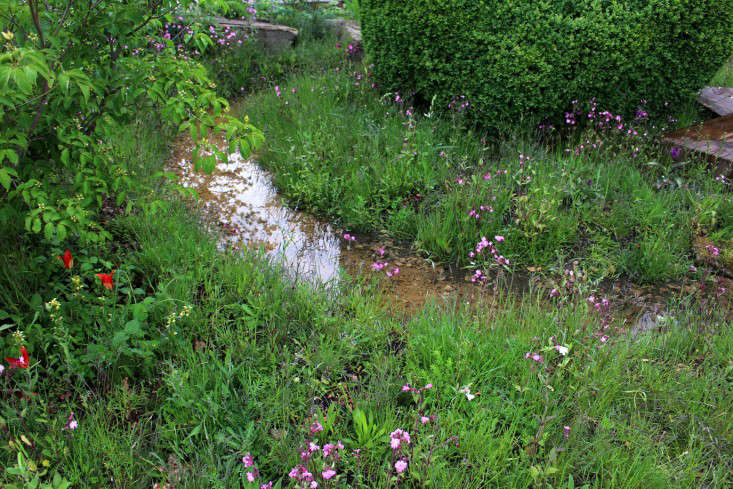 Pearson’s garden had a hard edge, which stopped it from becoming too woolly and untamed. Raised wooden walkways cut through the green, complemented by monolithic benches around the perimeter. Most show gardens are roped off but this one ended in a naked kerb. (A wineglass tossed into the rather trampled undergrowth told a story on Saturday morning).

A few years ago reliable gold-medal-winner Chris Beardshaw added rhododendrons to his Chelsea garden and caused quite a stir. Were we ready? Not quite, though he was not punished for it. Dan Pearson’s version of rhododendron this year was so refined (with flowers like honeysuckle borne on wiry trees) that no one really noticed that they were rhododendrons at all. The main point was that they were beautiful and yellow and confounded the plant snobs. 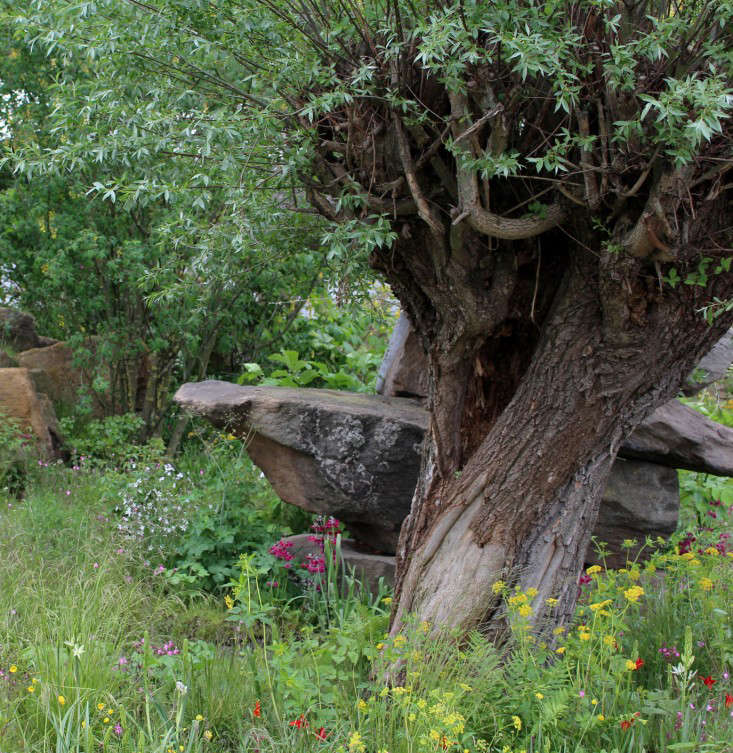 Pollarded willow is sculptural and efficient, the tree that keeps on giving. By pruning back the bendy new growth every year, you force the tree to constantly renew–and provide wands for making structures around the garden. This is the traditional way of maintaining willow. Originally there were two on Dan Pearson’s garden, but one of them interfered with the sewer on the show ground, owned by the 17th century Royal Hospital. 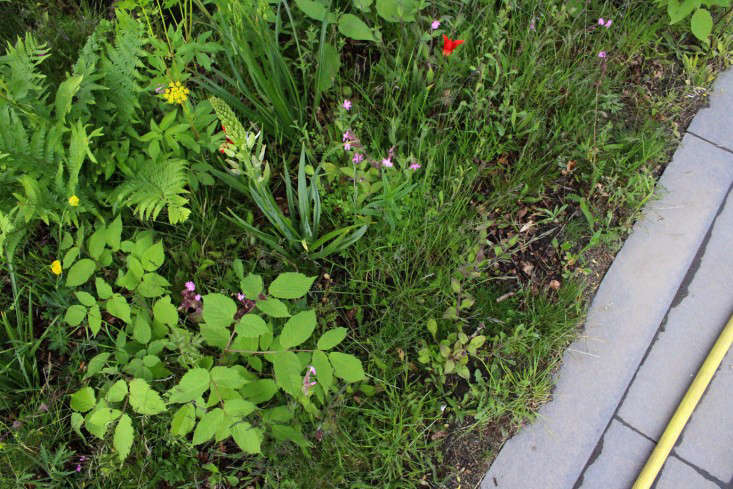 Above: Plants and pavement. Photograph by Kendra Wilson for Gardenista.

“You can still call it gardening, but it’s with a different eye,” Piet Oudolf told me during the show. Here, at garden’s edge, we see no fence, no preamble, just wild planting right up to the gutter. The plants are tough enough to stand a bit of trampling. 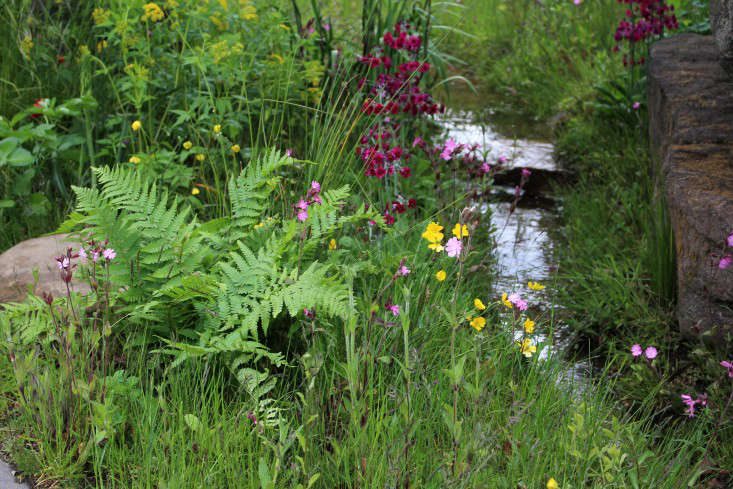 The stream in Pearson’s garden trickled through the plants, which relaxed convincingly at water’s edge. Besides a cut grass path meandering through the longer grass, this was another way of being drawn into the garden, away from the traffic all around. “There are lots of opportunities for looking,” as Dan told me during the set up.