In the bee-sung heart of Debra Hill’s rambling Oakland garden, waist deep in borage, calendula, and nasturtium, and flanked by walls of scarlet runner beans, you might for a long afternoon forget that two busy urban thoroughfares are just a stone’s throw away. 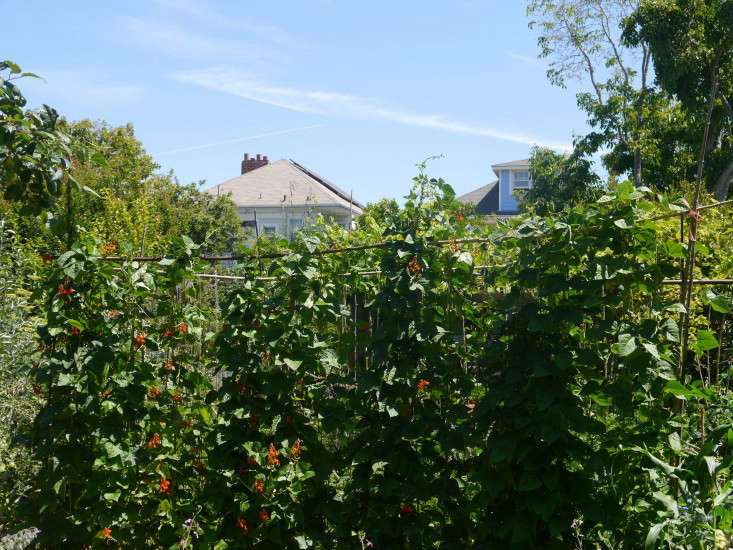 Above: The place is a wild urban wonderland where nature is given near full rein, checked here and there by Hill’s expertly indulgent hand. When she and her husband bought the 1889 Victorian 10 years ago in the Temescal neighborhood of Oakland, the yard–a little more than a quarter acre, and still the original lot–was a chaos of shrubbery and a formidable, foot-thick carpet of morning glory.

Above: Previously, the house and yard had been tended for almost a century by the same Italian family, who raised meat rabbits in the garden, leaving behind prodigiously rich soil, and planted the orange, fig, and black walnut trees that still drop sweet fruit come winter and summer. Perhaps it’s the strata of rabbit droppings, or the fact that the perennial Temescal Creek once flowed around the corner, making the site of the garden an old silty floodplain. Or maybe it’s Debra’s free-wheeling approach to tending her land, letting plants mostly self-sow and flourish where they choose, save in her sprawling kitchen garden plot, and the flowers planted throughout for beauty and for bees. Whatever the case, her yard hums with a near-feral abundance.

Above: Fennel grows 10 feet tall, nasturtiums bust out leaves far bigger than a human face, and the calendula blooms fervently all year round.

Above: The blooms of showy Papaver hybridium poppies (in numerous colors) flash their bright petals and seduce many bees before quickly going to seed, forming pods as magical to look at as their flowers. 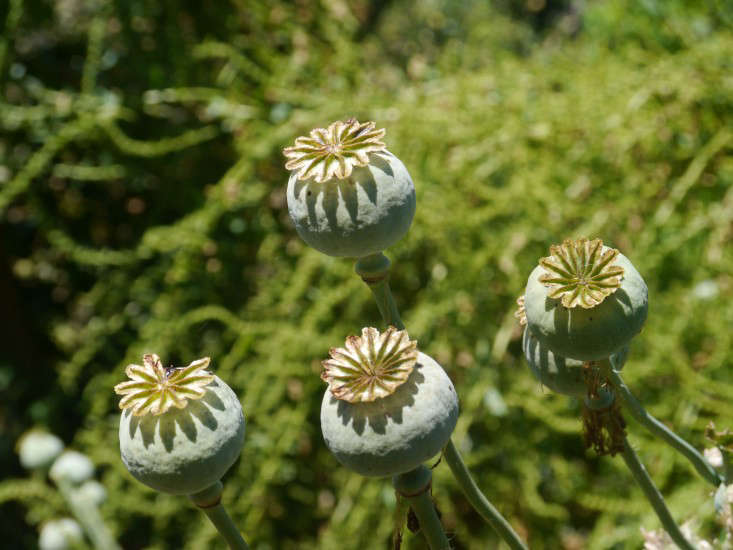 Above: Hill was always enchanted by the idea of a garden, ever since she tended her own as a girl. The idea that out of no more than a patch of soil, a bit of water and sun, and a handful of seeds, you could reap things like corn, melons, peaches, beautiful flowers–this seemed as magical as making ice cream. A pure treat.

Hill had no official training as a gardener before purchasing the house and lot, but rather learned everything by trial and error, experimentation, enthusiasm, and the help of many books. 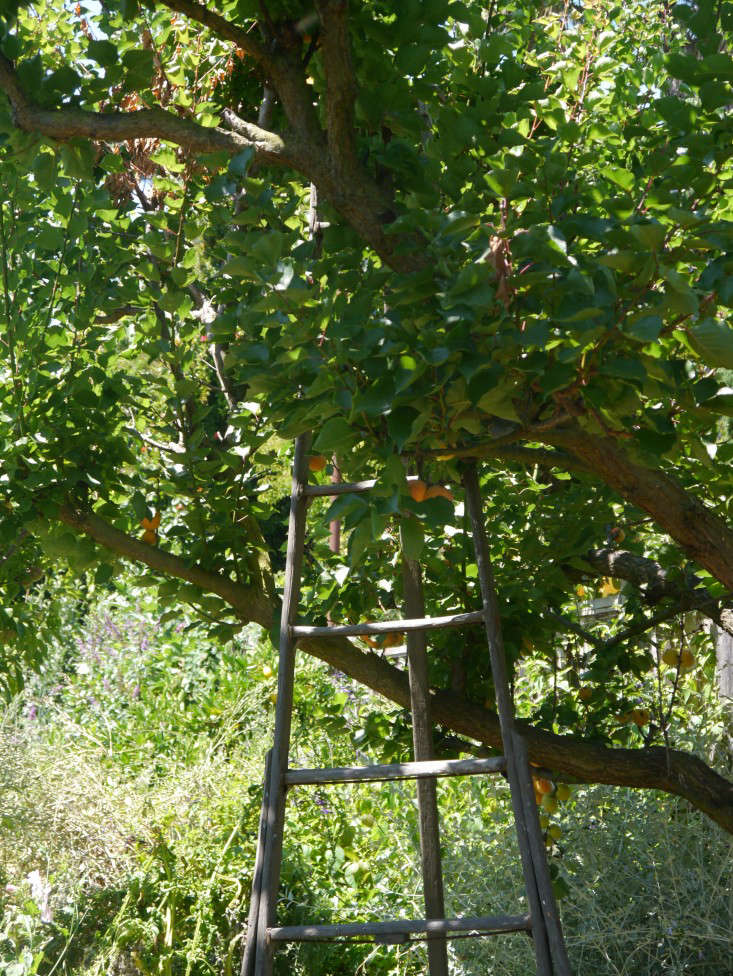 Above: During the four months between purchase and move in, Hill let her imagination go wild, choosing numerous species of fruit trees to plant–the apples, pears, plums, peaches, apricots, and figs which now rim the garden’s perimeter. 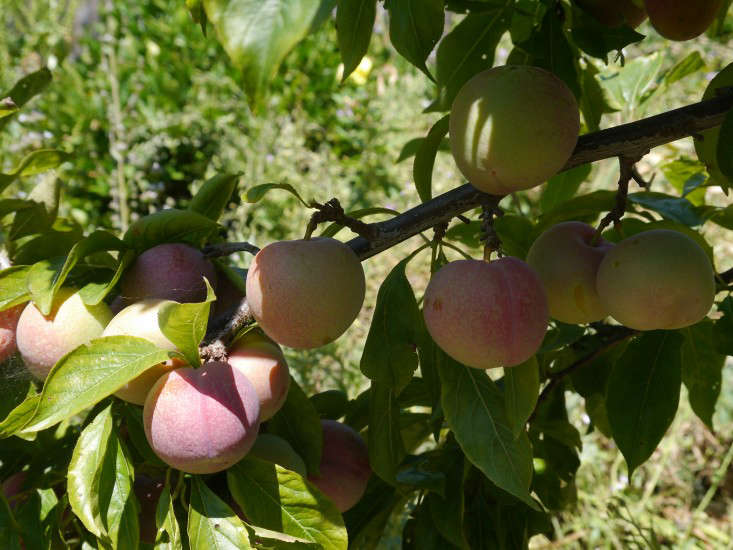 Above: Satsuma plums ripen later than the flush of sweet apricots or yellow peaches, extending the fruit-gathering season well into late summer. 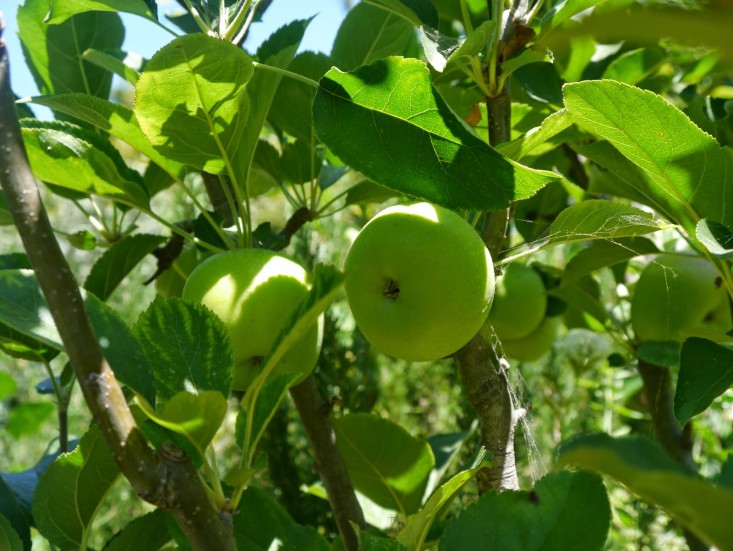 Above: The many varieties of apples–from Cinnamon Spice to Golden Russet, Hauer Pippin to Gravenstein–wait until autumn, heavy on their boughs.

Above: At the ankles of the many fruit trees, Debra has encouraged good bee forage for her hives, including motherwort (shown above, a favorite of bees and also an excellent medicinal plant), flowering radish, numerous species of salvia, sunflower, parsley, mint, clarkia, penstemon, tidy tips, poppies, and yarrow. 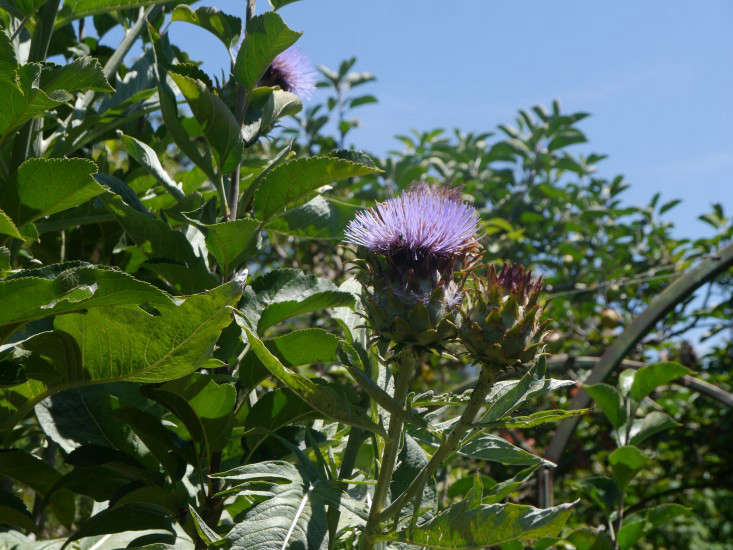 Above: The iridescent blooms of artichokes are another bee-favorite.

Above: The angora rabbit Hawthorn, who calls the garden home, also relishes many of the plants. He is kept and groomed for his lustrous wool (a spinner’s dream) by two tenants who live in a separate unit in the old house, and who share the rambling yard.

Above: Inside the chicken coop are four beehives amid fig branches and roses, and beneath a yellow peach. Debra and her family collect the honey at the end of the summer, and sell some on the street to neighbors. 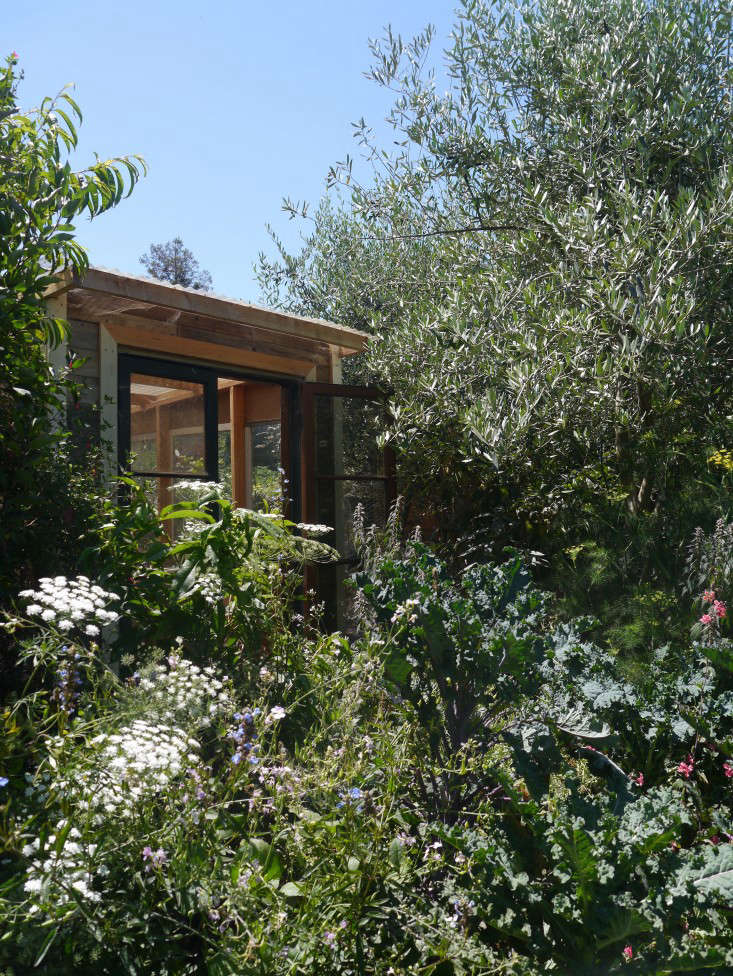 Above: In a charming greenhouse at the back of the garden, half inside the chicken coop and flanked by Queen Anne’s lace, red Russian kale, motherwort, and olive trees (Frantoio, Maurino, Leccino and Mission olives grace the garden), Hill sprouts all of the seedlings for her sun-baked kitchen garden. This always includes a rich variety of tomatoes–Black Kris, Early Girl, Jory, Bel Monte Pear, Islets, Sungella, Green Zebra and Margarita, to name a few. While the rest of the garden is kept with wildness in mind, Hill tends the kitchen garden with an eye for productivity. 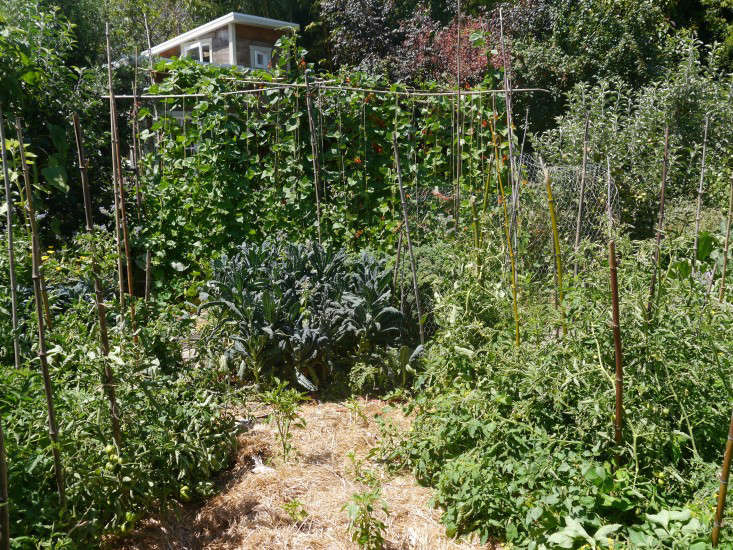 Above: To prep the beds for a summer of tomatoes, squash, beans, corn, peppers, and endless rows of kale, Hill plants a cover crop of alfalfa, vetch, and oats in late autumn, then cuts it back come early spring and lays it, layered with newspaper and straw, to settle into the earth and nourish the soil. In late spring, when the young tomato seedlings are ready, she tucks them deep into the soil, through layers of nitrogen-rich mulch, and watches them shoot up toward the sky. 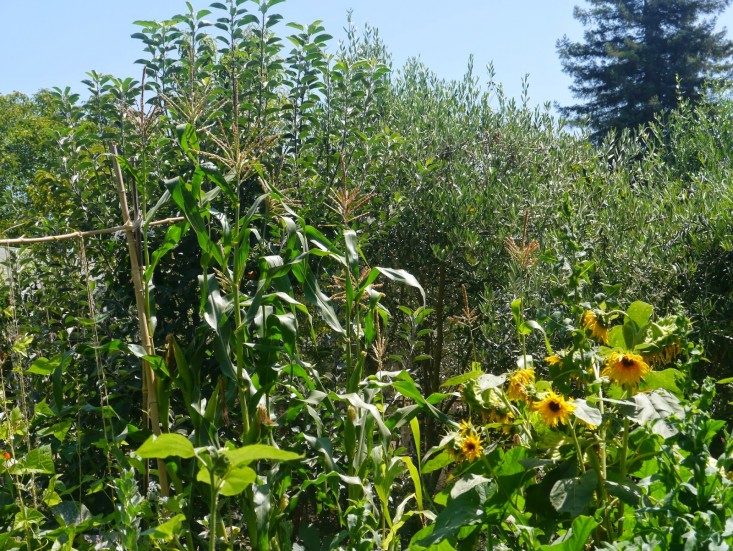 Above: Corn, sunflowers, and runner beans grow exuberantly, warmed by day-long sun in the back of the yard. 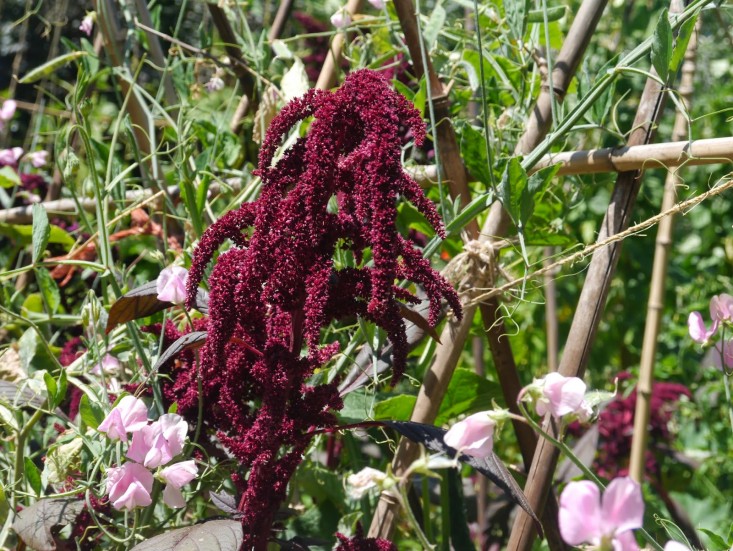 Above: Hopi red dye amaranth is a yearly volunteer in the kitchen garden, beautiful to look at and productive too–it drops thousands of tiny black seeds which make a delicious cooked grain. 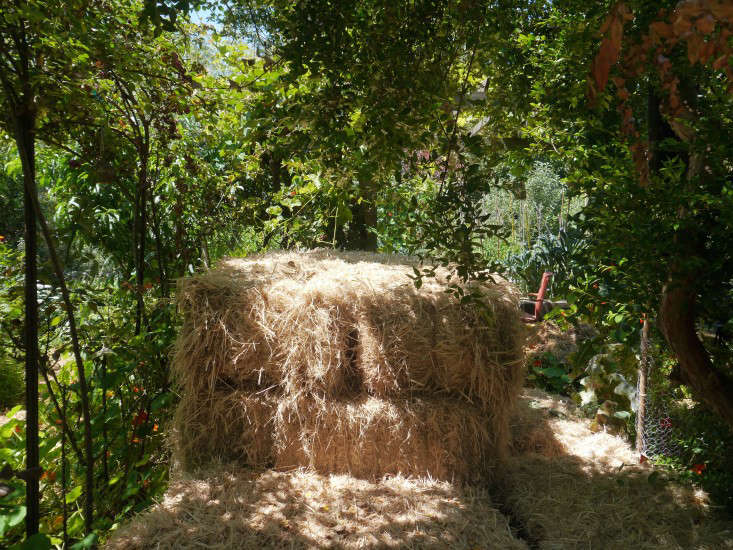 Above: Hill brings in truckloads of hay a few times a year to mulch the garden and to cover the paths, lending the place an air of a cozy, footloose farm, and keeping the walkways delineated and soft, good for the barefoot games of children.

Above: Grapes and kiwis shade a mid-yard arbor, and birdhouse gourds, grown here, house yearly broods of Bewick’s wrens. Amid the noise and haste of urban Oakland, Hill has succeeded in her dance with the wild, creating a space where plants and humans alike can flourish, naturally at ease.

For more of our favorite East Bay gardens, see:

Trending on Remodelista: The Simple Life