In calmer days, advances in plant breeding came from people who had time on their hands and plenty of space. Vicars, for instance. Plant breeders and hunters were often people who worked hard, but not desperately hard. They were able to dabble as knowledgeable amateurs and make garden history at the same time.

Cedric Morris, the renowned 20th century painter who moved in bohemian circles and ran an art school from his home at Benton End, Suffolk, was one of this gaggle of plant breeders. Irises were his specialty: He painted them and he bred them, bringing to both an exquisite eye for color and form. Morris irises, particularly his breakthrough pink, were pretty hot at the time. But where are they now?

Above: A mysterious tall bearded iris. Although Cedric Morris bred more than 90 varieties, the majority have been lost. The Royal Horticultural Society National Collection holder Sarah Cook, who lives near Cedric Morris’ home, has 25 with solid identifications–and from ten to 15 which have all the signs of Morris but no confirmation. (RHS collection holders make a collection of herbarium specimens of a defined group of plants from their living collections.)

At least three Morris irises were sold at Austin’s in the United States in the 1950s. The varieties were called Benton Oberon, Benton Ophelia, and Benton Rubeo, which was named after a pet macaw. They may survive somewhere.

Sarah Cook, who grew up in the neighborhood of Morris’ place at Benton End, was able to track down people who knew the painter and who might have clues about where his progeny may have gone. Some irises were tracked down in the United States. Could there be more unnamed varieties waiting to be welcomed back into the fold? 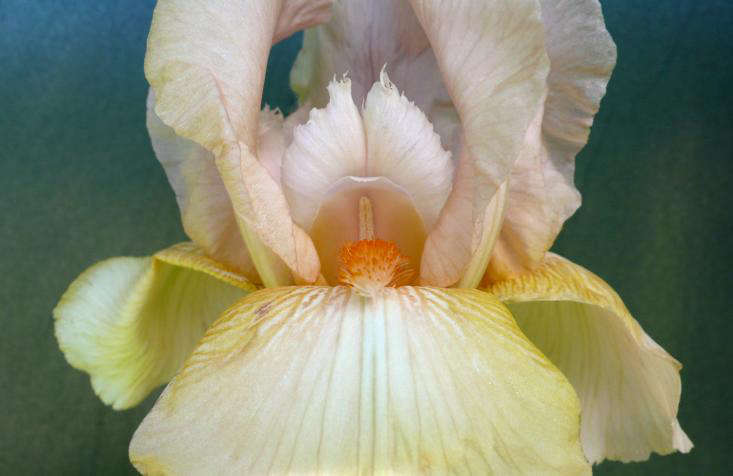 Above: Iris Strathmore, looking a bit like a royal hat, was named by the Queen Mother. The standards (upright petals) appear in Morris’ own chiffon pink, with a tangerine beard.

Morris was a baronet (Sir Cedric) and he was a painter in Cornwall and Paris before founding the East Anglian School of Painting in 1937 with his partner Arthur Lett-Haines. Lucien Freud was a pupil.

Above: Iris Edward of Windsor. Pale pink was a signature color for Morris and this was a hugely popular plant in the 193s. The récherché colors are a giveaway: Morris began breeding in the inter-war period. Cook’s own description of them is “elegant and retro.”

Above: Sarah Cook took over as head gardener at Sissinghurst after the departure of Pam Schwerdtz and Sibylle Kreutzberger, who had been joint head gardeners for Vita Sackville-West. Vita was friends with Cedric, inevitably, and there were Morris irises in the gardens at Sissinghurst Castle, including Benton Nigel, shown here. Cook was able to build up her own small collection of historical irises while working, and on retirement she started to collect Cedrics in earnest.

Above: The proper way to describe this iris Benton Olive would be: “Olive self, purple flushed fall, heavily reticulated.” Modern breeding tends to emphasize a vivid beard and minimum reticulation (veining). As well as lots of ruffles. Although this iris is olive in color, it is actually named after Cedric Morris’ friend Olive Murrell, who is responsible for the timeless classics London Pride (also grown at Sissinghurst) and White City.

N.B.: To see Olive Murrell’s iris White City in a modern garden, see Bearded or Stinking: How Do You Prefer Your Irises?

Above: Have you seen this iris? Old British varieties survive in old gardens beyond the UK. Could it be in a garden you know?

Above: This pre-war frock of a flower could well be made of velvet and crushed silk. It bears all the hallmarks of Cedric Morris but for now, it is nameless.

Read more of our Plant of the Week stories for Lily of the Valley, Wisteria, and Violas.