“The party at Great Dixter starts at 7.30,” says my friend Gina. “They asked me if you’d like to spend the night.” Oh, I’ll have to think about that. Would she stay over with me? “No,” is the short reply. A naturally shy and retiring person, I agree to the whole package. On Saturday night a couple of weeks ago, my overnight bag was whisked away to the South Bedroom of the home of the late, great garden writer Christopher Lloyd. 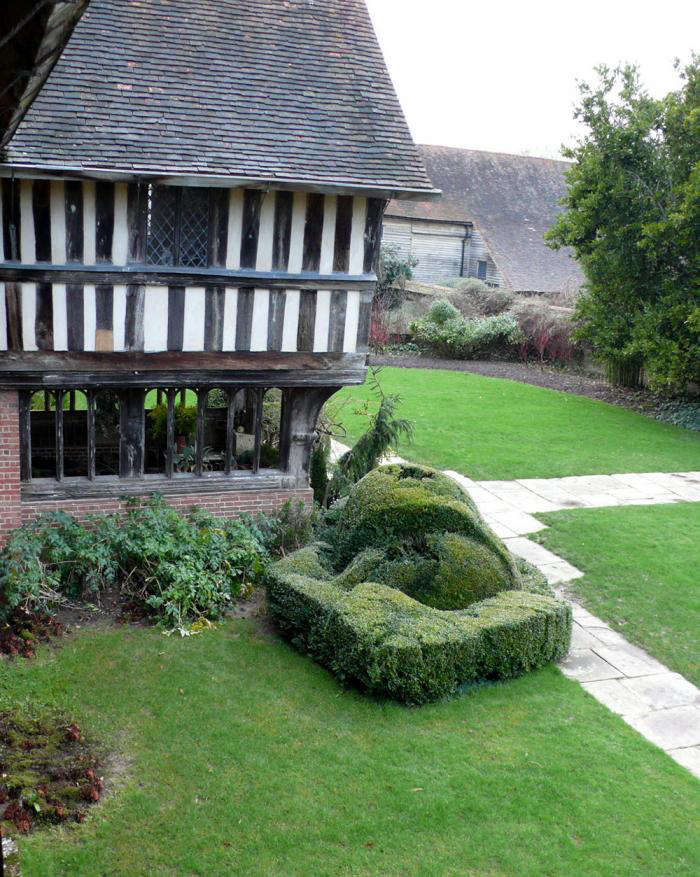 Of course it wasn’t a “package” at all, just a gathering of friends and friends-of-friends, in a rambling house in the country. We were greeted with a massive fire in the Yeoman’s Hall, the kind of blaze you hope for in a large draughty room but rarely find. The house is surprisingly warm, the plaster between the beams of the medieval rooms storing up heat in a sensible old-fashioned way. Cold was possibly my greatest fear and I took an armory of knitwear for my night in the South Bedroom. Just in case there weren’t enough blankets. 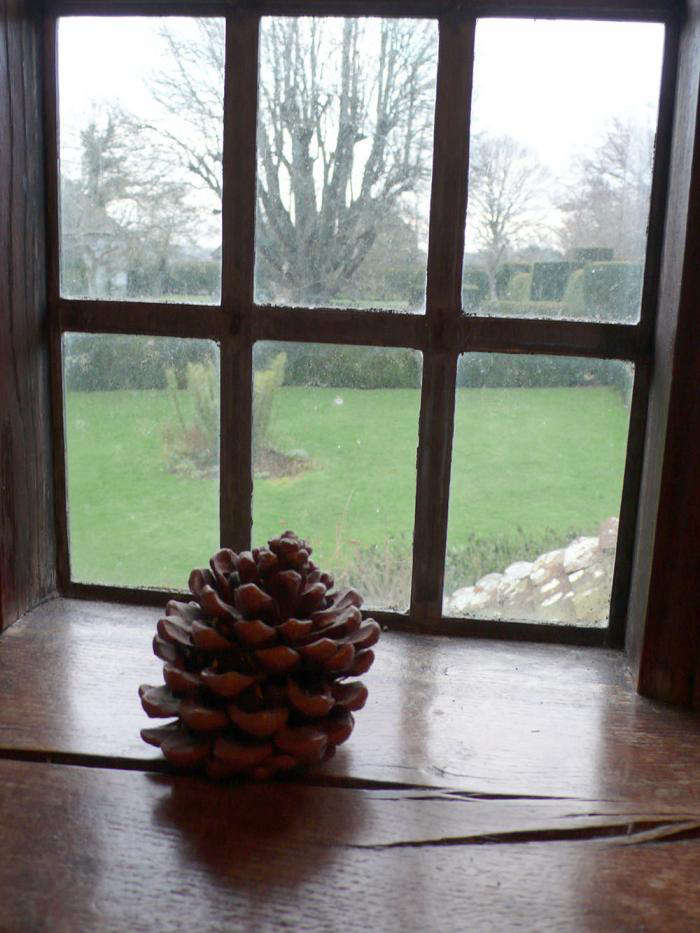 I have only spent time at Dixter in the winter, and much of that has been in gloomy half-light (and now, complete darkness). Having been involved in a couple of Christmas fairs, with a brisk walk around the garden before and after, I have missed what is to many the point about the gardens: the color. “You need to take tranquilizers before visiting in the summer,” says someone at the party. I’m happy to wait because there has been a lot to learn from a place with such wonderful structure. Dixter has great bones. Color can be so… distracting. 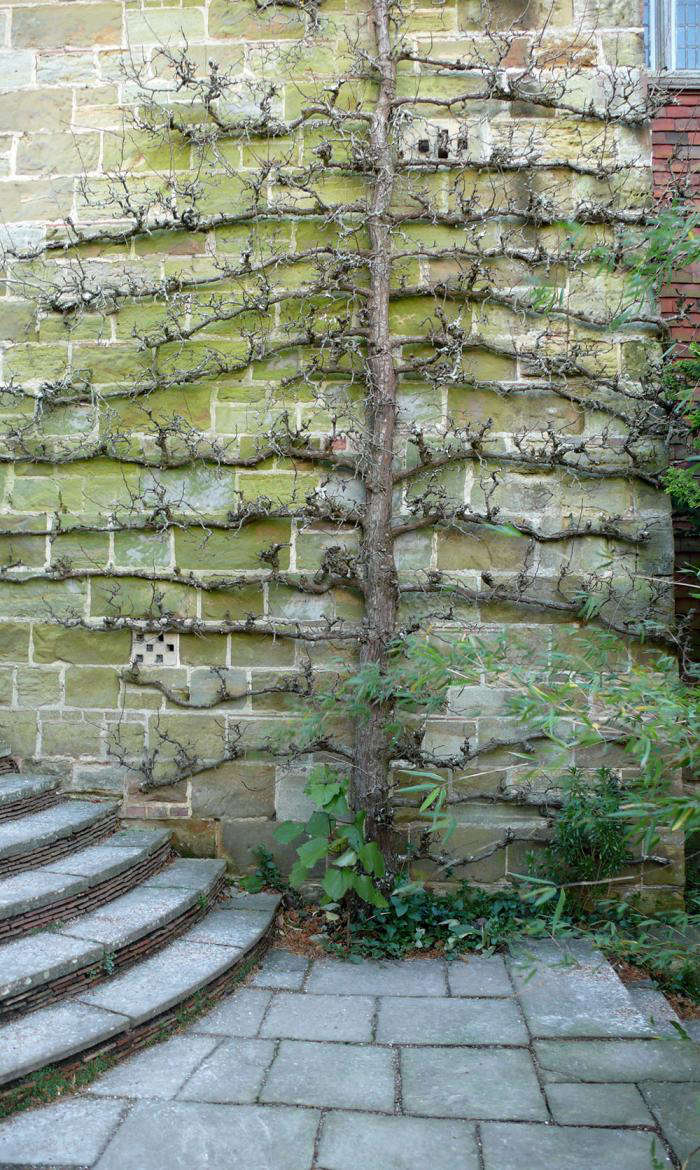 Christopher Lloyd, the iconoclastic garden writer and last owner of Great Dixter (though not the last resident), inherited a perfectly nice Arts and Crafts garden from his parents, before putting his own mark on it. Designed by Edward Lutyens in collaboration with Lloyd senior, the garden wraps around the house and is the home to much topiary as well as yew and box hedging. Yes, there are garden rooms but there also are meadows and orchards, a stream, and a view of the East Sussex Weald. It has the best of everything. I’ve been witness to all this and the colors have been green and brown. 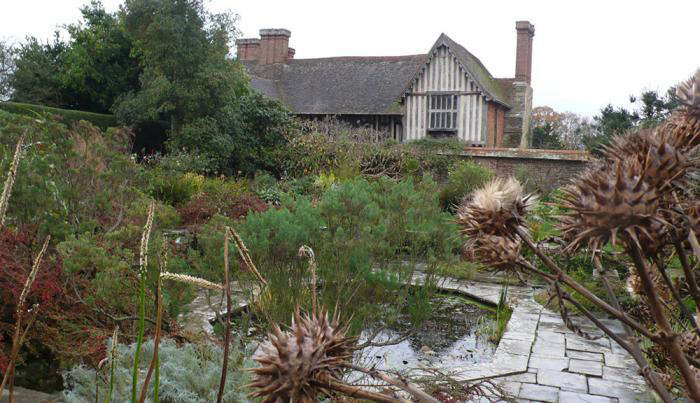 People begin to drift away from the party before midnight and I am left All Alone, although a couple of people do live here. There are two staircases and a lot of closed doors, each accessorized by Lutyens with neo-medieval latches and handles. My host offers to leave the light on in the bathroom so that I don’t lose my way. My bedroom is simply furnished but has the essentials: a brass candlestick, binoculars, and a pile of modern magazines. I have a narrow four-poster bed with a reading lamp hanging down from its canopy and a servant’s bell on the wall next to the pillow. Above the posy of winter box on the dressing table hang some embroidery samplers. A peacock on the point of being bitten by a serpent has the stitched initials of one of the Lloyd children: embroidery was expected from all five boys and the only girl. 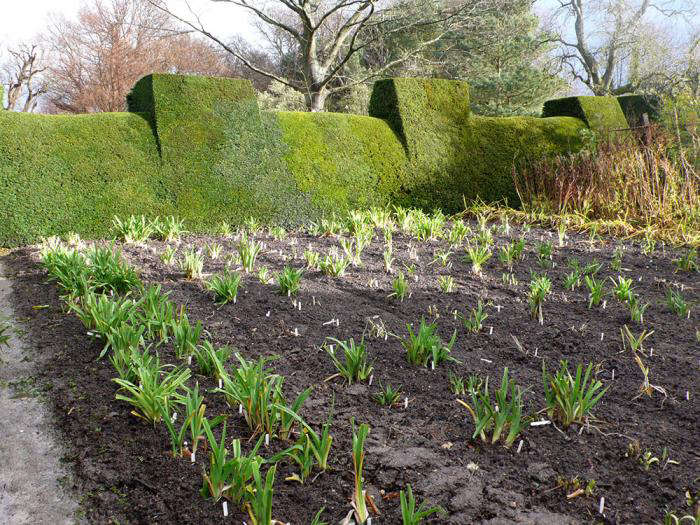 After a wonderfully warm and comfortable night between pressed linen sheets, I rush outdoors to take pictures as soon as I wake up. It is perishing cold. I admire the beautifully dug kitchen garden, the luxurious plumping of soil and trimming of leaves around hellebores, the snowdrops against yew, and some very early daffodils on a bank. There aren’t many flowers but there is a lot going on, involving bamboo markers for areas which have just been planted; boards traversing the intensely muddy beds; espalier fruit trees, some left un-pruned. The latter will be part of the tuition for a Symposium this month, one of four learning weeks throughout the year. An “in-depth tour” of the house is available to the symposia groups, a draw in itself. People tend to return, not just because they want to learn more but because they enjoy being part of the Dixter “family” and this medieval house, with its layers of centuries. They want to share in its interesting future. 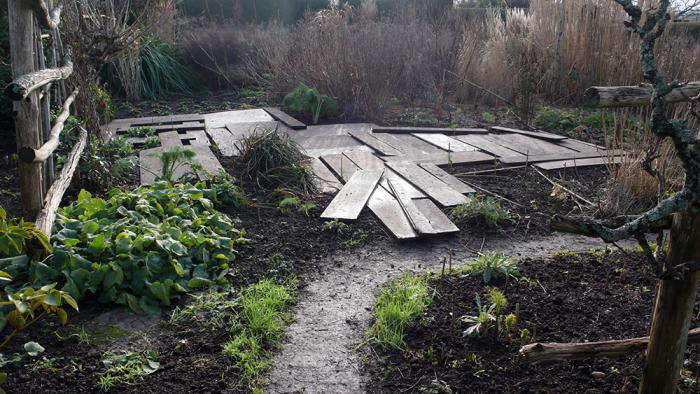 It’s a forward-looking place. Free of the constraints of an outside trust, the house and garden move on, governed by the Great Dixter Charitable Trust. The garden is more radical than the house in which nothing is new and there is a feeling of “If it ain’t broke…” Outdoors the garden has always moved forward. With the help of his head gardener Fergus Garrett, Lloyd enjoyed confounding expectations and Dixter is not a heritage garden. In deepest winter there is a vitality about the place and I hear that summer is exciting too, and quite colorful. Great Dixter Gardens are open from the end of March.

(N.B.: For more, see “Required Reading: The Best of Christopher Lloyd” and “The New Ruralism: Rustic Barn Style from England.”)