If there is one chef who could turn a former government tax office into an atmospheric restaurant with indoor garden, it is Skye Gyngell. After all, she made her name cooking from a shed at a plant nursery in Greater London. When we say it was at Petersham Nurseries and that her garden-to-plate cooking won her a Michelin star, it is clear that with Skye, anything is possible.

Now installed in a proper kitchen in London’s West End, Skye’s new restaurant can be found in the labyrinthine Somerset House. It is hugely talked about and is evocatively named Spring.

Photographs by Tom Mannion, except where noted. 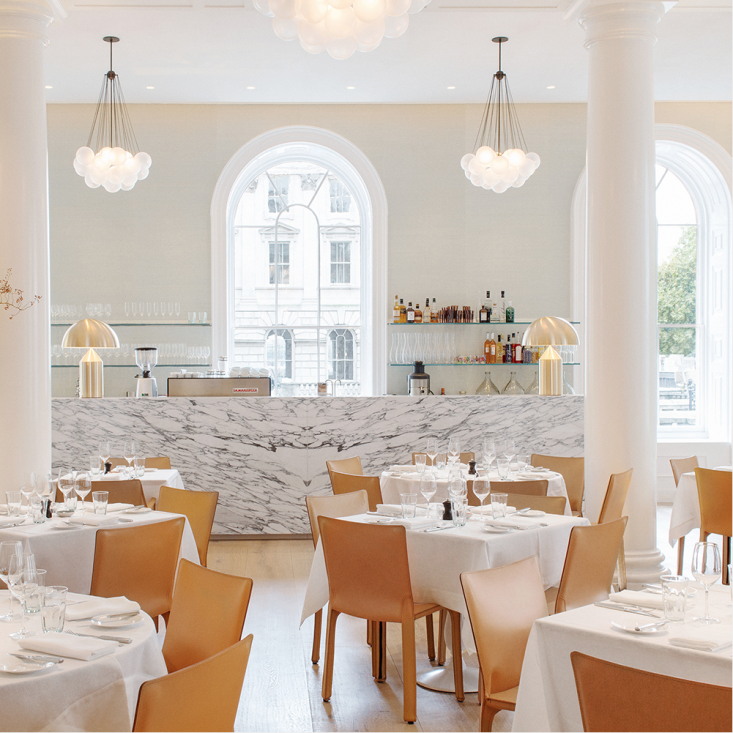 Above: Seasonal, informal, original food is the big draw. Photograph via Somerset House.

The New Wing at Somerset House isn’t new at all: it was built in 1856 as the final part of a series of government offices housing the Inland Revenue. The last of the tax people have gone and the New Wing is open to the public for the first time.

Above: Photograph by Amber Rowlands.

Skye Gyngell is a much-loved character who cut her teeth in London working with Fergus Henderson (of St John) and his future wife Margot Henderson (Rochelle Canteen) at the little restaurant above the legendary French House pub in Soho. She was also food editor at British Vogue.

N.B.: Margot Henderson’s book could guide you through the holiday season: Required Reading: You’re All Invited.

Above: The team at Spring is mainly female, with a male wine team. Skye asked garden designer Jinny Blom to make a garden-like space within the bigger restaurant. It is a plant-filled atrium, with repeated reliefs of Gunnera along the walls.

Above: Jinny’s brief was to create a garden for a restaurant with no outside space. “When a client says, ‘I want it to be a garden,’ and the space is indoors and with low natural light levels,” explains Jinny, “then it’s time to get creative.”

Above: This has been a wonderful collaboration. Jinny: “It is everything I love in a brief: technically complex and creative, allowing me free artistic reign to re-imagine the space.”

Above: Jinny brings her other disciplines and outside experience to bear on her work. She has always been interested in craft and is an active member of the Art Workers’ Guild, as well as sitting on the board of the Therapeutic Landscapes Network.

Above: Somerset House is a cultural hub in central London. Perched on the side of the River Thames, it has slowly been reclaimed from the Inland Revenue, for whom it was built, although the Courtauld Gallery has been there for many years. Somerset House plays host to London Fashion Week, a winter ice rink, outdoor cinema, and concerts and cultural exhibitions. The Blondie show has just opened in the East Wing. For Spring, take a right after the Courtauld.