How to get the English country house look if you don’t happen to own an English country house? It’s easier than it sounds. The best gardens move with the times and in this gorgeously photographed book, some of the most spectacular gardens have elements which are new or simple. Let’s do some mental translating: 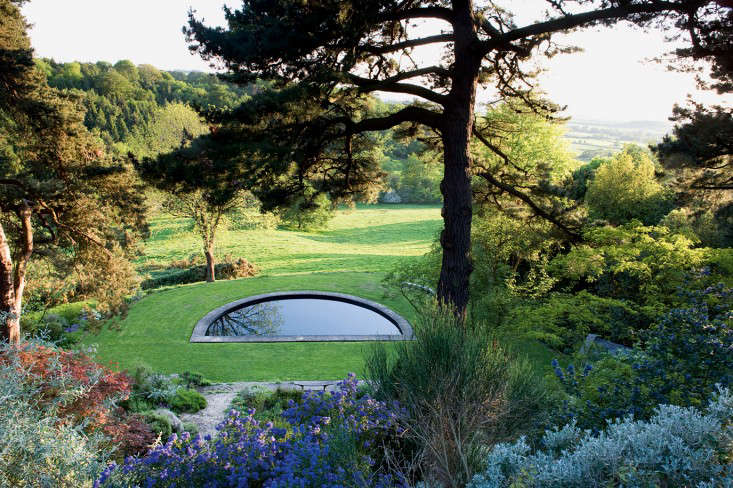 Above: For those with a view, water enhances it, seamlessly. Kiftsgate Court in the Cotswolds (literally next door to Hidcote) is in its third generation of owner-gardeners, and each has added significant elements without hindering the harmony of the whole.

Kiftsgate is in hilly country and the gardens were terraced in the 1930s. The semi-circular swimming pool on the bottom level was added later, during the second tenure of the garden. 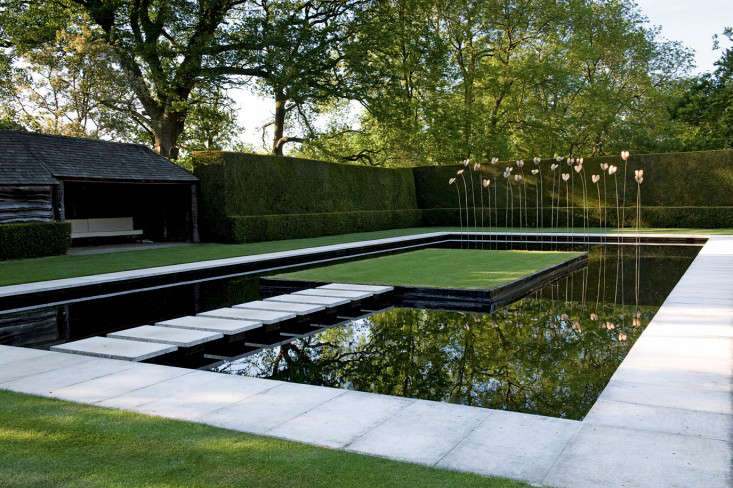 Above: Kiftsgate again, and a different kind of pool. The site of an old tennis court was rebuilt as the Pool Garden in 1999, with geometrical slabs of white Portland stone leading to a grassy square in the center of a black-painted pool. Surrounded by short grass and the old tennis pavilion, clipped yew provides the backdrop. Leaves of philodendron (made of bronze) wave around at one end, to cast even more light.

The author of this book, George Plumptre, compares the dynamic of great English country house gardens to galleries, in the assimilation of different styles from different ages. The result, he says, is “eclectic yet somehow harmonious.” 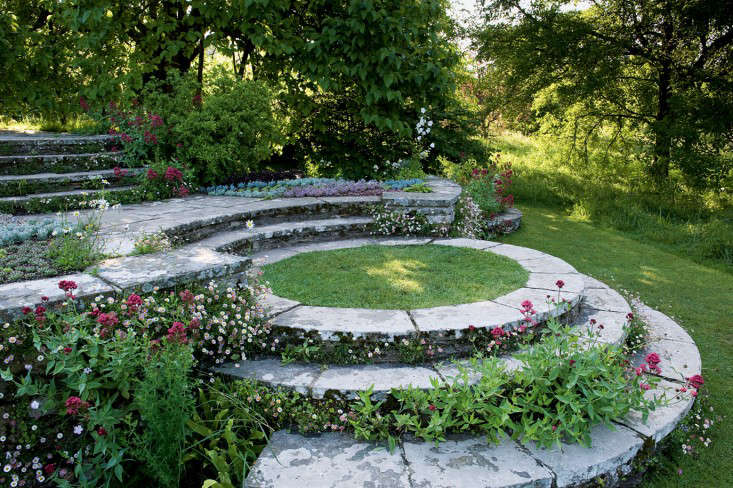 Above: Circular steps occur throughout the gardens designed by Sir Edwin Lutyens, whose architecture  combined so famously with the planting style of Gertrude Jekyll. In the case of Great Dixter (shown above), Lutyens’ creative partner (and client) was the owner Nathaniel Lloyd, father of the late Christopher Lloyd.

If kept clear of planting, circles are ultra-modern. When accompanied by free-spirited spreaders such as erigeron and red valerian, the softened edges give the whole a rustic charm. Note the very neat planting of succulents on the top corners; all is not fuzzy. 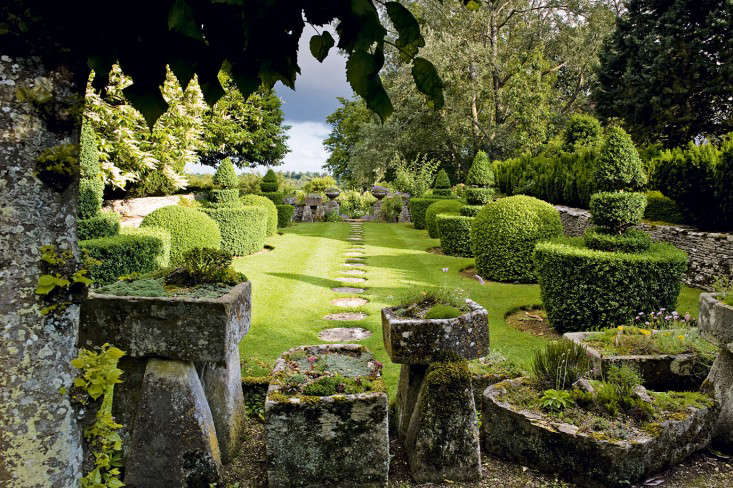 Above: Mixing and matching, at the Arts and Crafts garden Rodmarton Manor in Gloucestershire.

Known as the Troughery, this enclosed area has that special something which you find in English country house gardens. A straight line of stepping stones in a striped lawn is accompanied by oddly shaped yet symmetrical topiary. Stone walls run parallel to this scene, with myriad garden troughs at either end. All very neat and organized on paper, if you omit the charm. As the author says, it is “formal, yet intimate and slightly quirky.” 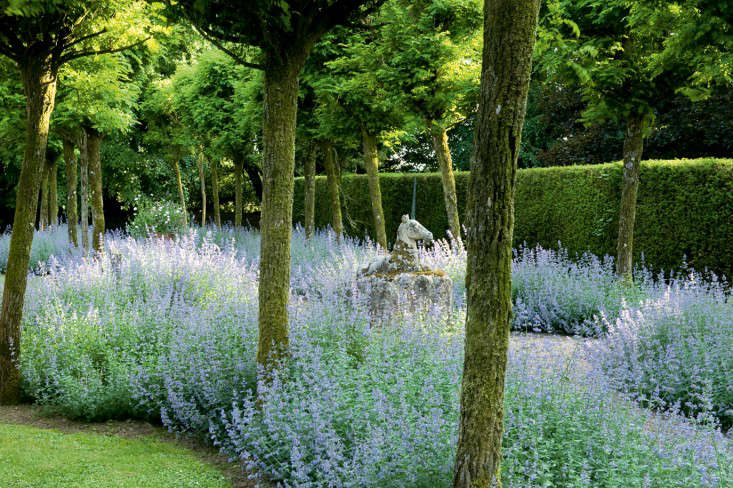 Above: Exuberant simplicity at Cothay Manor in Somerset. The current house was built to celebrate the end of the Wars of the Roses (in the 1400s) but it dates to somewhere “in the mists of time.” With its stone statue in the center, The Walk of the Unicorn complements the medieval atmosphere but the lines of Robinia underplanted with billows of catmint (Nepeta ‘Six Hills Giant’), are the most recent addition to the garden. 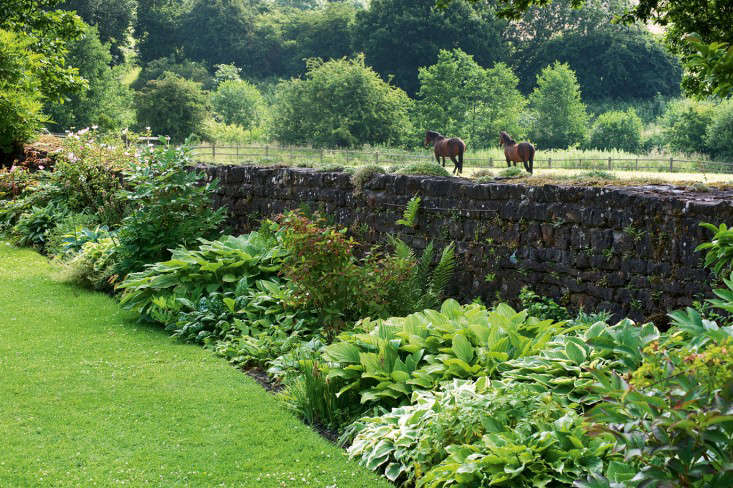 Above: An answer to the age-old question: What to plant under a stone wall? As long as it doesn’t face south or west, the shelter and moisture under a wall is ideal for plants such as hosta and tree peony. Ferns grow out of the walls while the lawn edge is kept straight, achieving that longed-for mix: informal formality.

The English Country House Garden by George Plumptre is published by Frances Lincoln at $40.

For more ideas about how to incorporate an English vernacular into your own garden, see The New English Garden, by Tim Richardson and The Grandes Dames: 10 Stately Gardens from the Gardenista Gallery.

The Novice Gardener: Help, Can This Olive Tree Be Saved?