Great Dixter in East Sussex is a warm place. With rain lashing against the windows and wind howling around the chimneys, it is still immensely warm; cozy even.

Yes, there are roaring fires in the massive fireplaces, under which several people can stand or sit, and yes, there is always something going on in the kitchen, but there also is a warmth out in the garden, because the place has a big heart. Even without the late great Christopher Lloyd, who was born at Great Dixter and gardened here for about 80 years, it has a lot more to say.

Winter is a great time to visit Great Dixter because its bare bones are very good. Set high on the Sussex Weald, the network of yew and box originally planted by Lloyd Senior, Nathaniel, with the help of Edward Lutyens, is practical as well as charming. Along with a good number of trees, the house and garden are enclosed and protected and in turn Dixter throws its arms around people who work there and those who are lucky enough to visit. 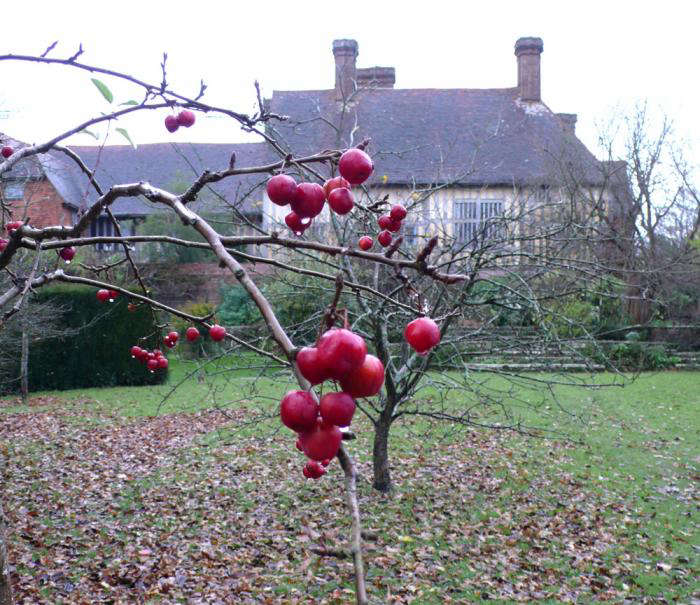 Above: Malus baccata, in the orchard behind the house. In summer this is a meadow, with a narrow brick path threading through and there are more meadows at the front of the house. Like her youngest son, Christopher Lloyd’s mother Daisy took a radical approach to gardening, and they both experimented with meadow flowers. This caused confusion and consternation until the recent acceptance of prairie planting, though people of a tidy bent still ask questions. 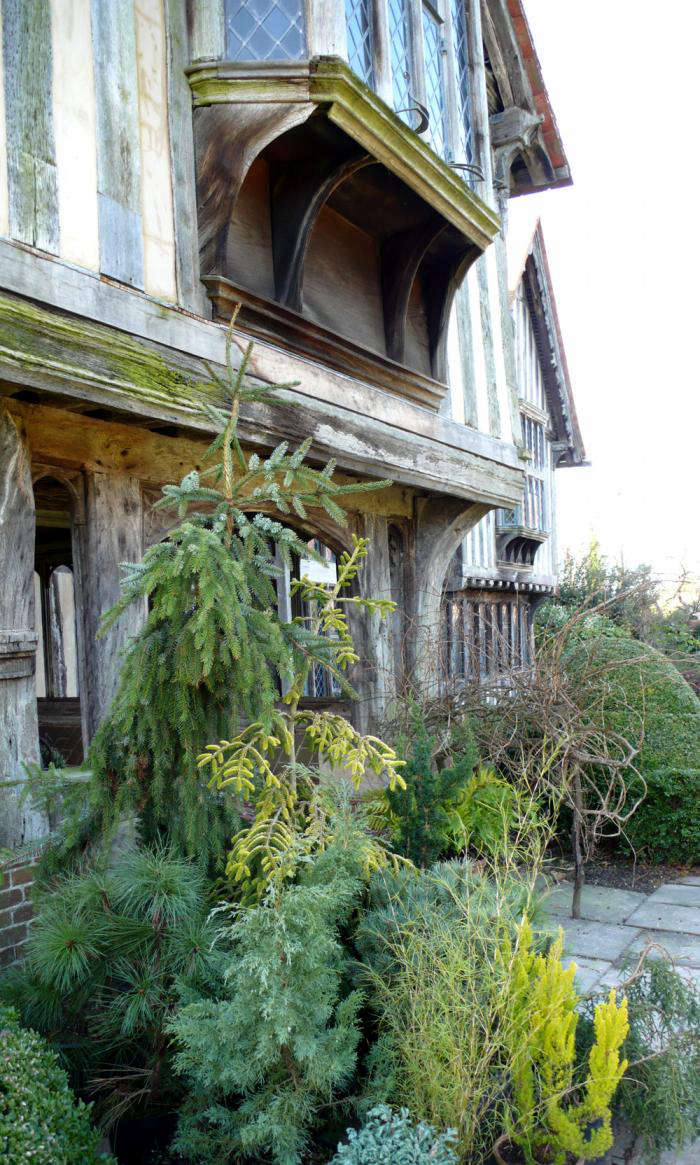 Above: The ancient beauty of Great Dixter has human proportions and the “porch” is the perfect place for amassing pot plants. The house is a combination of great hall, (shown above) dating from around 1460, with a yeoman’s hall built just after. This was rescued from demolition, not too far away, and taken apart and rebuilt here. Edward Lutyens was called in to restore these buildings and to add more living quarters which are entirely “in keeping.” 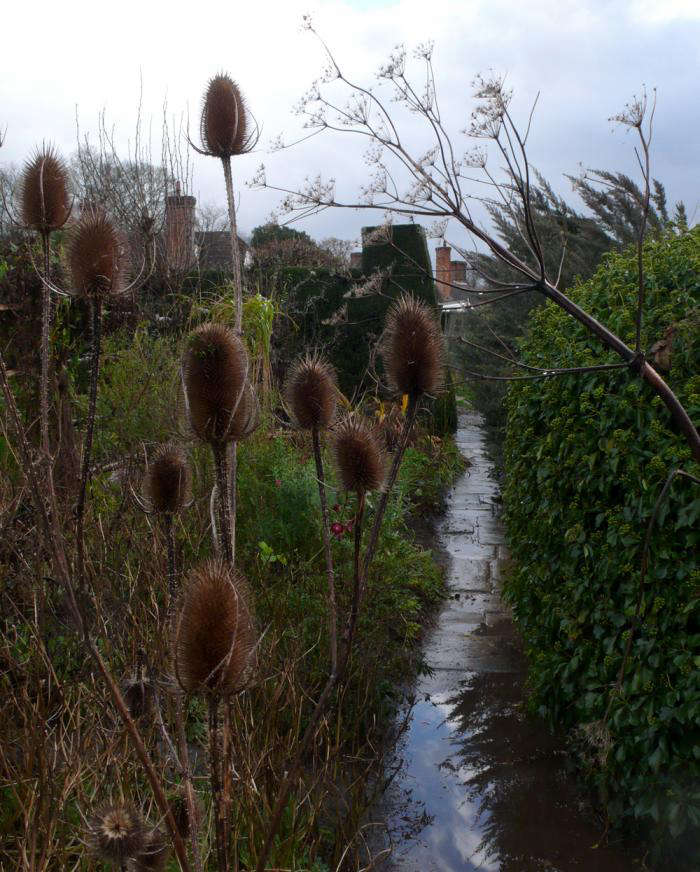 Above: Hedges form narrow alleys by the front of the house. Seed heads are left to add height and structure during the early winter months, as well as food for birds and invertebrates. 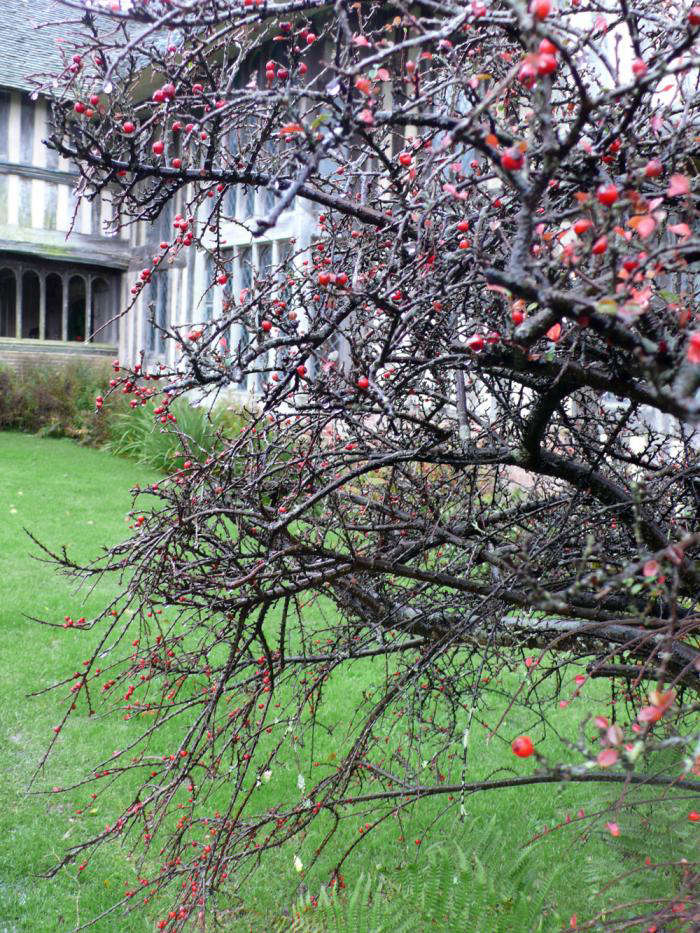 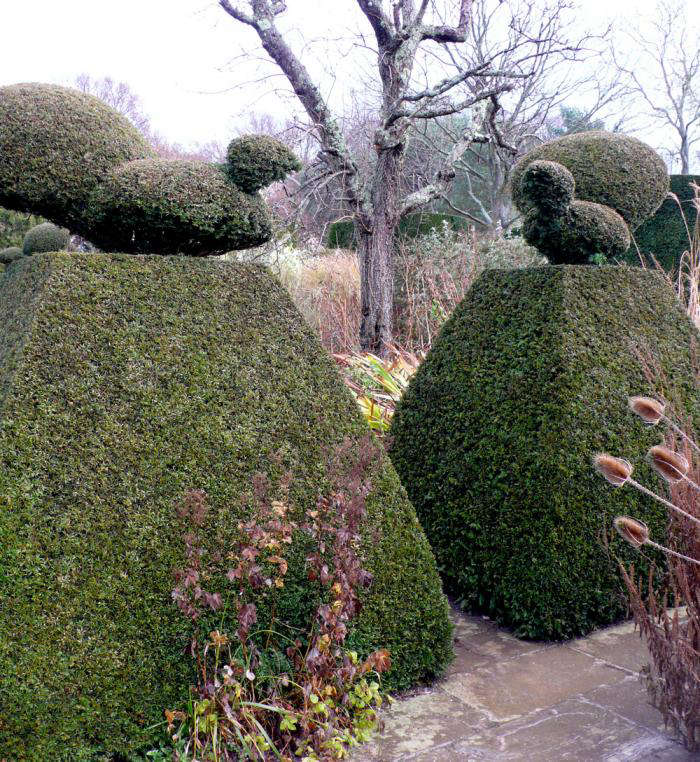 Above: Without the distraction of the vibrant summer color so characteristic of Christopher Lloyd’s planting style, the Arts and Crafts garden is able to take center stage in the winter months. 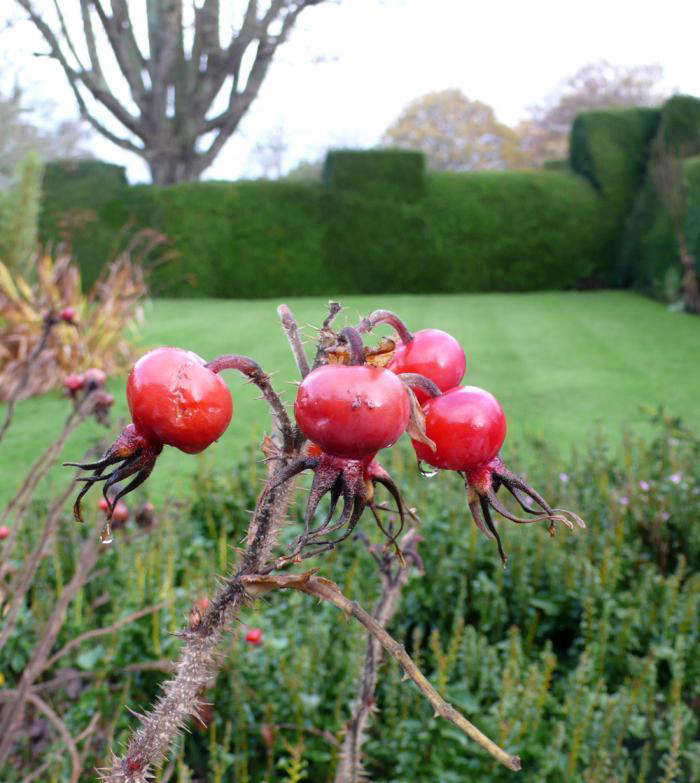 Above: The shriveling and the browning of plants is balanced by much glistening red: in berries, fruit, and hips. 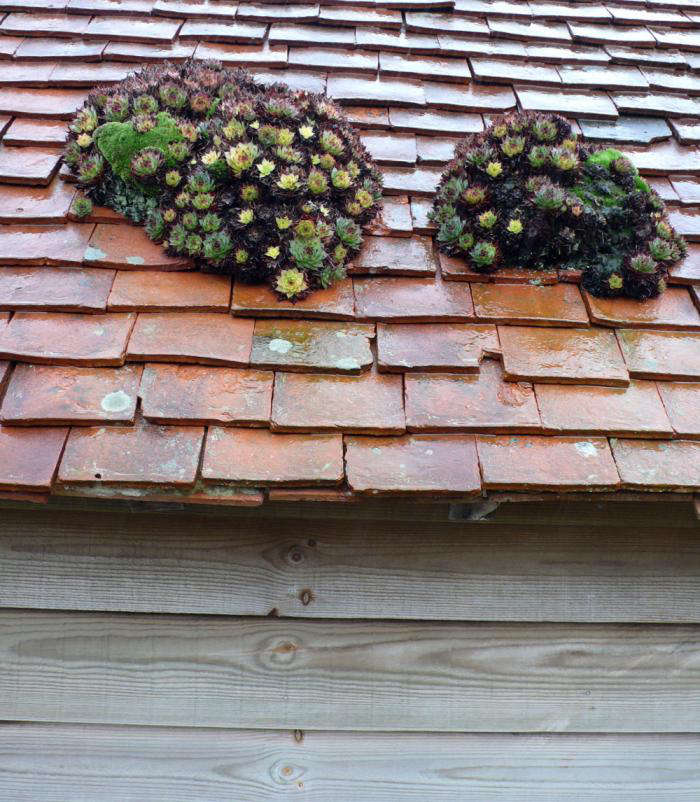 Above: On the tiles of some of the low-roofed outbuildings or “hovels” and on the main house itself are sedums growing on a slant. Actually, they are growing out of wooden trays on the tiles, but these are barely visible and are rather charming when they are. 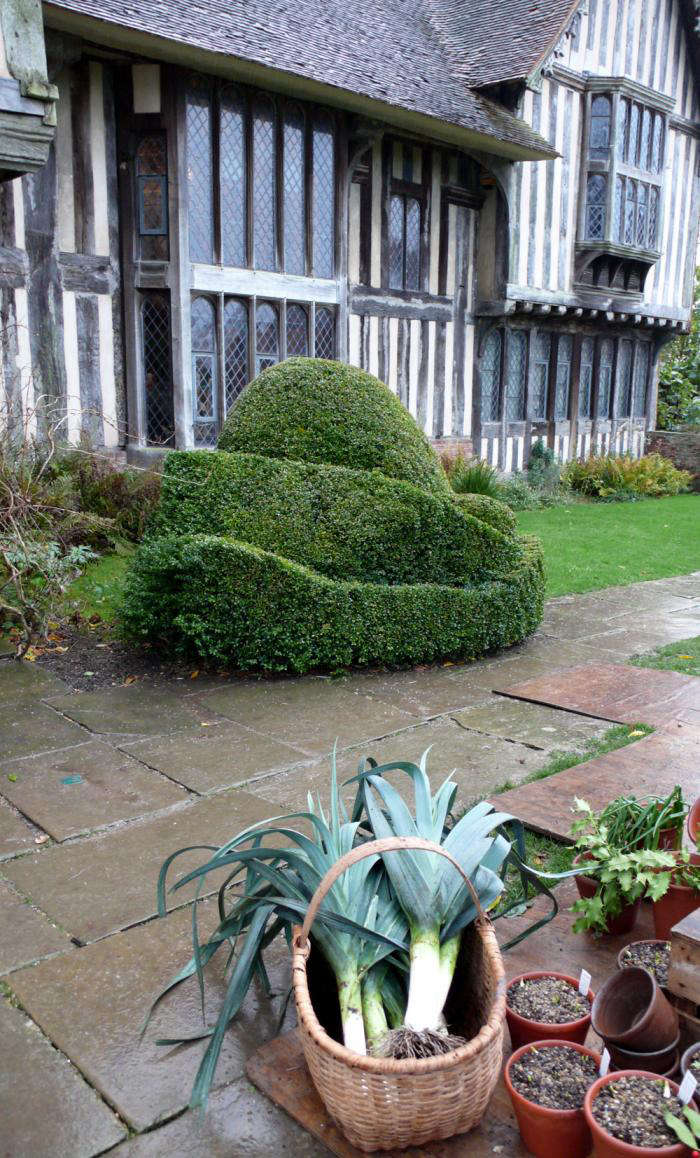 Above: Freshly cut box shapes near the front door. In his book The Cottage Garden, Lloyd talks of the “cottage garden gentry” who took certain elements of traditional cottagers’ gardens and made for themselves a loose cottage garden style. He admits that Great Dixter is based on this as well as Hidcote and Sissinghurst. “Although they are patently on a larger scale than that of a true cottage garden, these planting schemes and the intimate atmosphere they create have a strong feel of the authentic about them,” he writes. 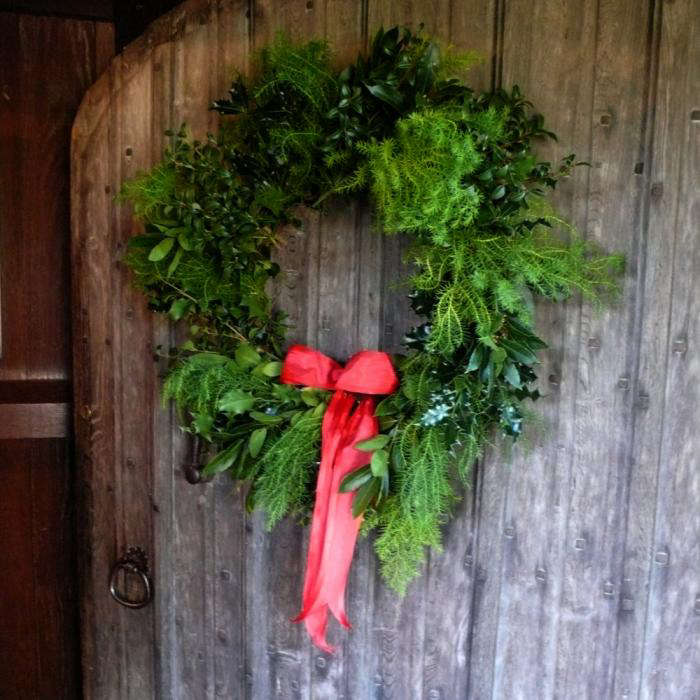 Above: Planning a visit to East Sussex? Great Dixter is open from the beginning of April until the end of October. The next practical symposium will be from January 27 to February 3. The symposia, which occur throughout the year, offer a rare opportunity for a small group to learn traditional techniques in the borders of Great Dixter with head gardener Fergus Garrett and his team. The week-long stay involves private tours around other gardens and an in-depth tour of the house.

Gift Guide: For the English Gardener

The Winemaker's Life: A Garden Idyll in Northern California