Some seeds we humans celebrate–we delightedly pluck them from pomegranates and crack open walnuts. Others we ignore–we flick them from lemons and cut them from apples. And still others we suppress, breeding for seedless versions of watermelons and grapes. But all deserve a second look.

Take, for example, the coconut: It’s a “sailor seed,” designed to float for many nautical miles until landing (and spreading its DNA) on faraway shores. Or the seeds of the African Tetraberlinia moreliana tree, the world record holder for catapulting its seeds as far away from itself as possible. (That would be nearly 200 feet, by the way.)

These are but two facts I found in Seeing Seeds: A Journey into the World of Seedheads, Pods, and Fruit, where the humble seed gets all the glory. (It, after all, has all the guts.) When I first reached for the book, I knew to expect great things from photographer Robert Llewellyn, whose past work includes series volumes Seeing Flowers and Seeing Trees, but I was delighted to find the text by Teri Dunn Chace exceptionally well-researched and informative.

Read on for facts about ten (of the book’s more than 100) seeds at which we took a closer look: 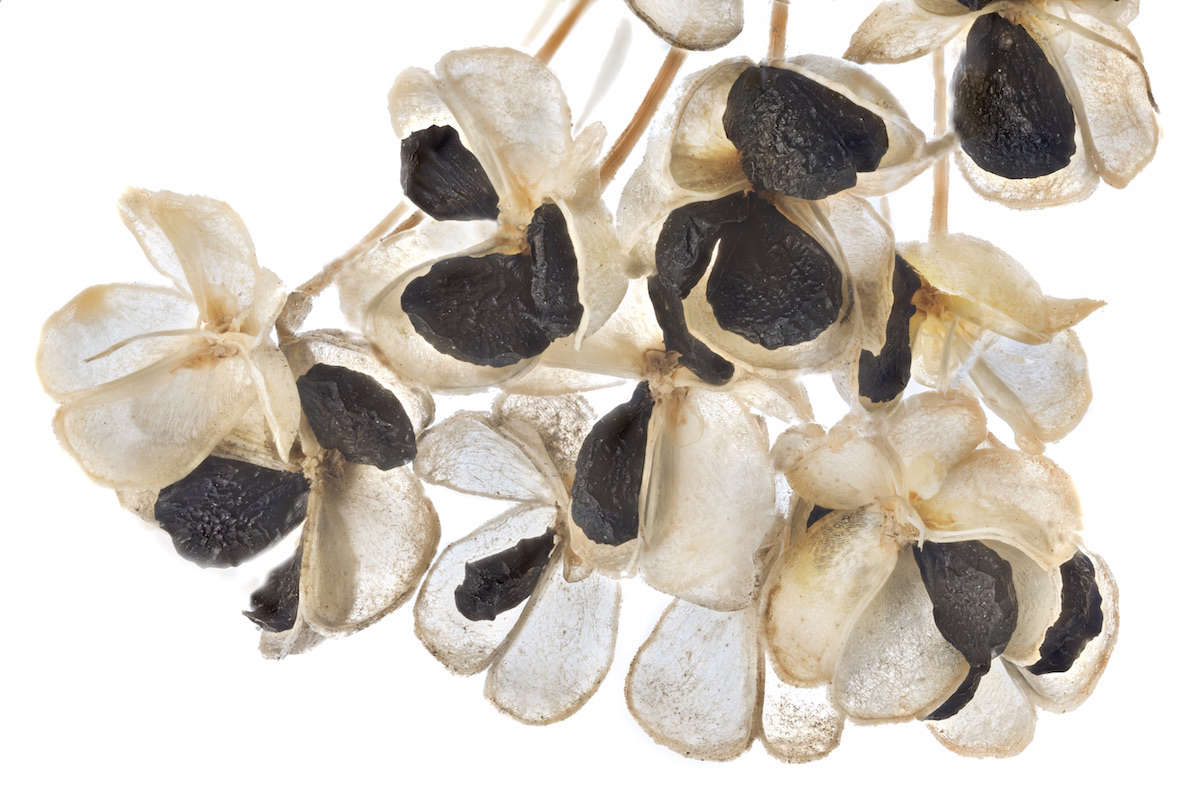 Above: Humans grow chives for the hollow leaves, not the seeds. That’s just as well for gardeners, because chive seeds are tricky to collect and even harder to germinate. The tiny black seeds are ready to gather when formerly pink-purple chive flowers turn brown and shatter at the touch. Then they require darkness and constant moisture before producing tiny chive bulbs. 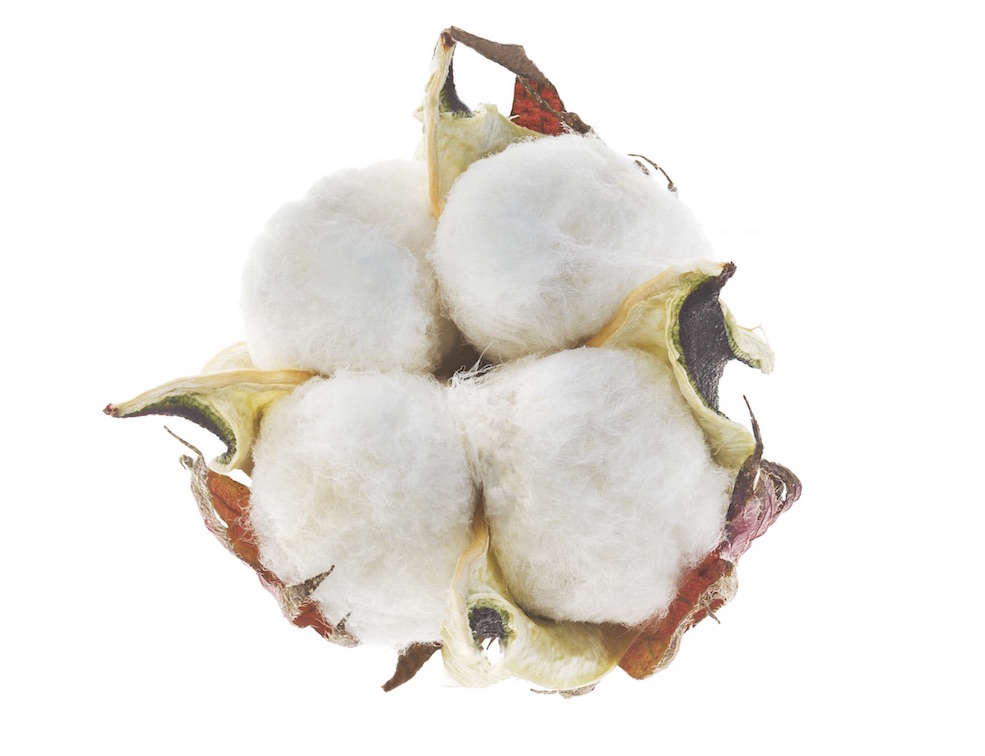 Above: Although it’s a staple crop for humans, the author guesses that many people today would fail to recognize a cotton shrub before it blooms and goes to seed. It’s recognizable to us by the fluffy white part, almost pure cellulose that protects up to 45 seeds per pod. If left alone, the cotton seeds would be dispersed by wind along with their attendant white pillows. 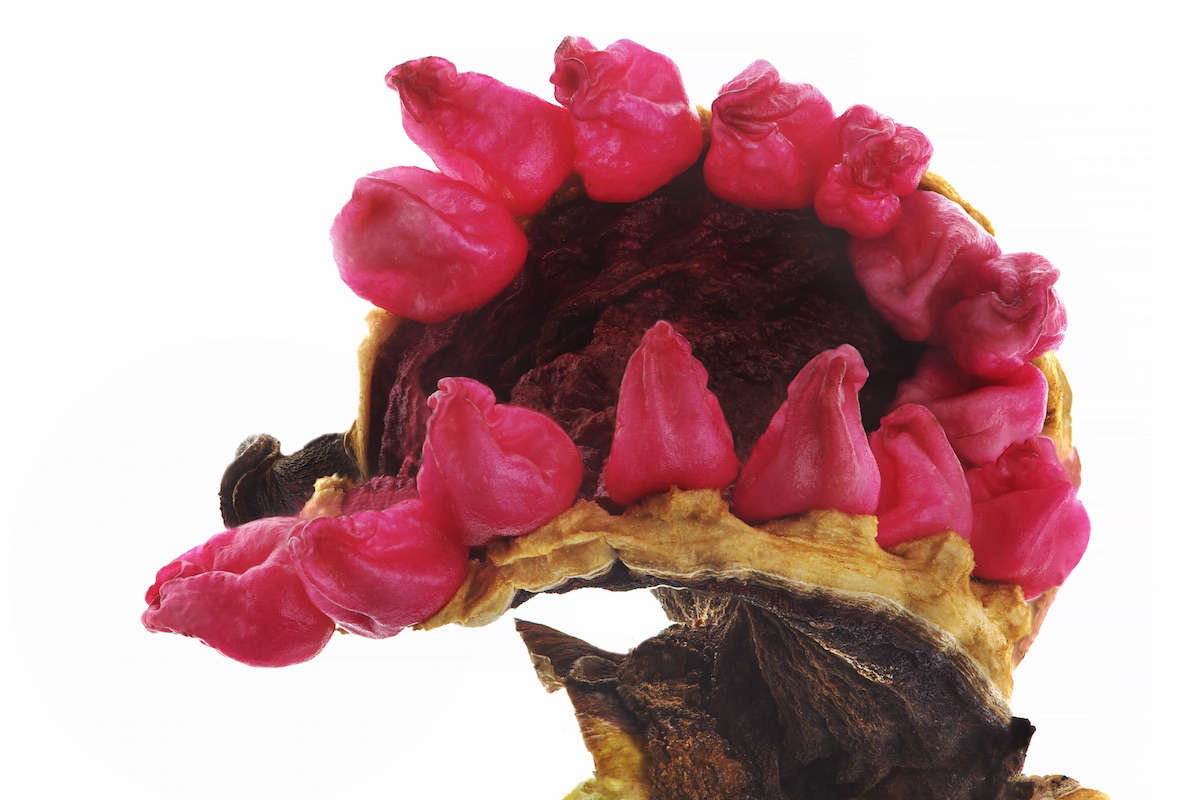 Above: “The first time I saw a split-open, segmented peony seedpod, I recoiled,” says Dunn Chace, likening it to a tiny dragon protecting its valuable seeds. But its seeds are not always so valuable, it turns out. Unbeknownst to the plant, the seeds of many peonies are infertile–especially the plush-looking peonies favored as cut flowers. 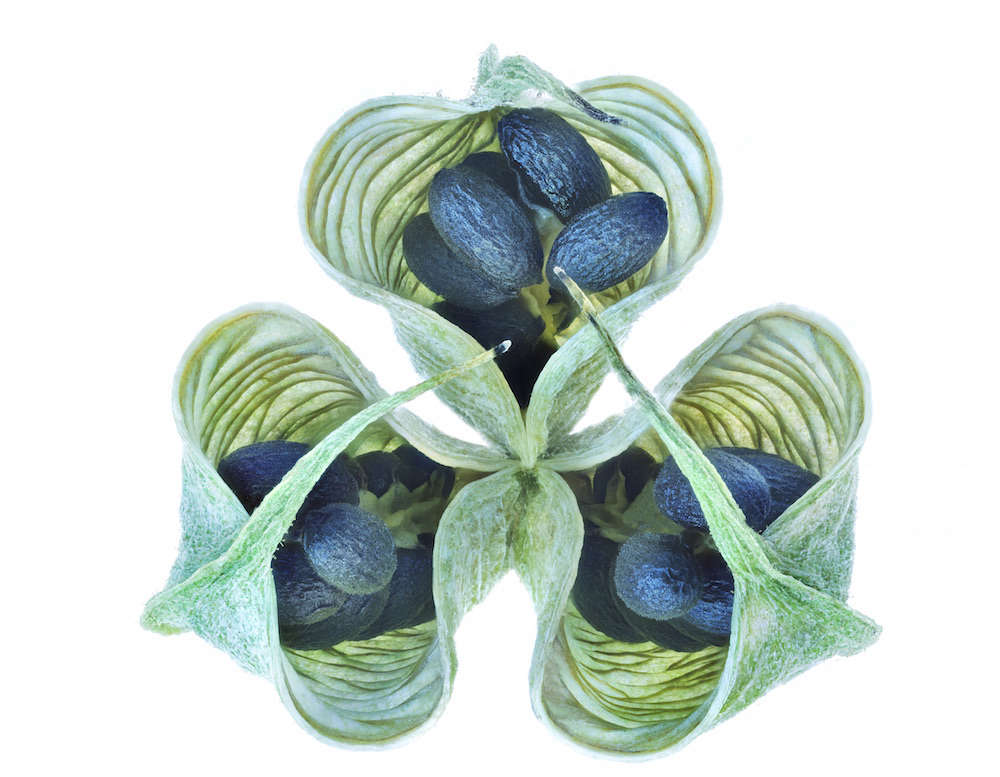 Above: The author advises gardeners to keep a careful eye out for hellebores at their seed-bearing stage–devoid of flowers but showing off blue-black seeds–which she calls “beautiful in its own right.”

Above: The bells of the Chinese lantern begin as small white five-lobed flowers in early summer before transforming into bright orange lanterns which protect the seeds nestled within.

Above: The conelike fruits of the Southern magnolia are “rather unique in the world of tree fruits.” Ripe red seeds fall out of their holding cells while remaining attached via tiny “umbilical cords,” allowing the seeds to dangle and be noticed. 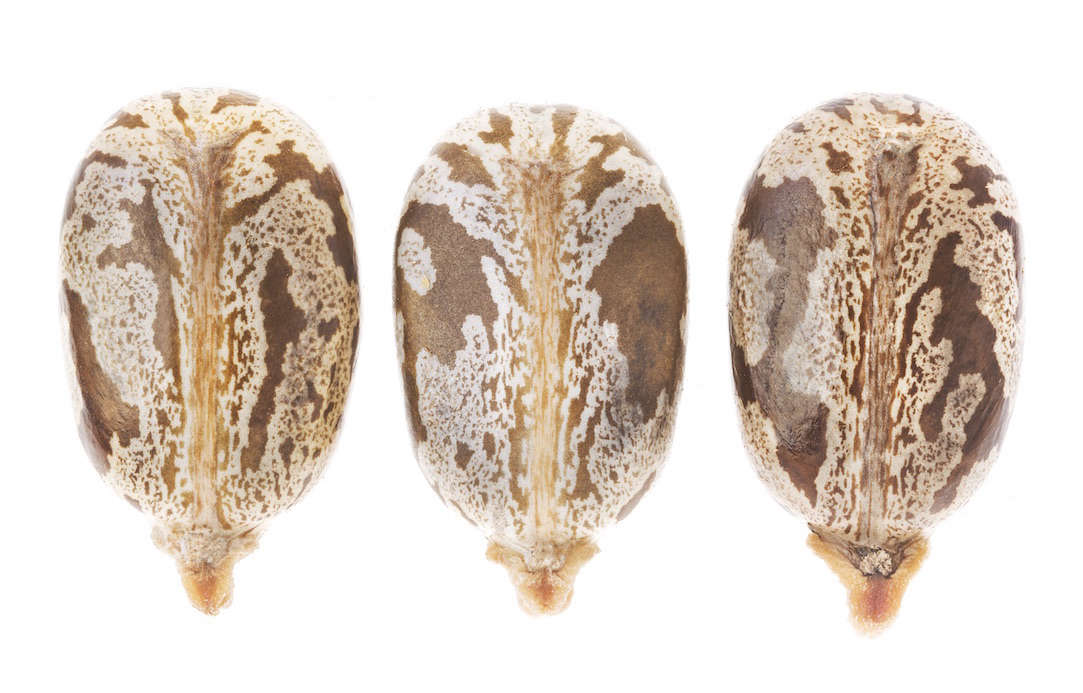 Above: The castor bean is a fierce protector of its seeds, which contain ricin, commonly used as rat poison; one seed can kill a child and three will kill an adult. The seed has a very high oil content for which humans have managed to find uses, including motor oil and as a laxative. 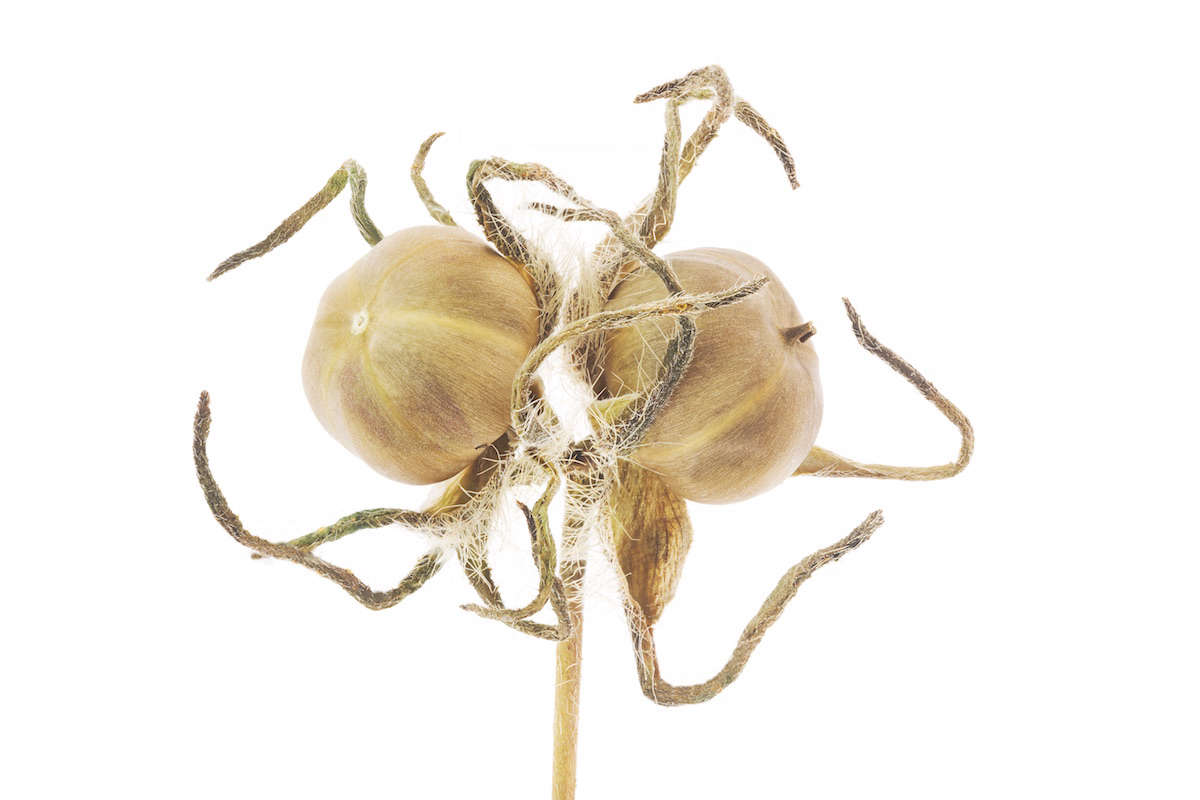 Above: Each pod of a morning glory contains up to eight dark seeds, which have an especially tough seed coat to delay germination until warm weather. Morning glory seeds contain LSA, a cousin of LSD, which produces unreliable “contemplative feelings,” hallucinations, and nausea. 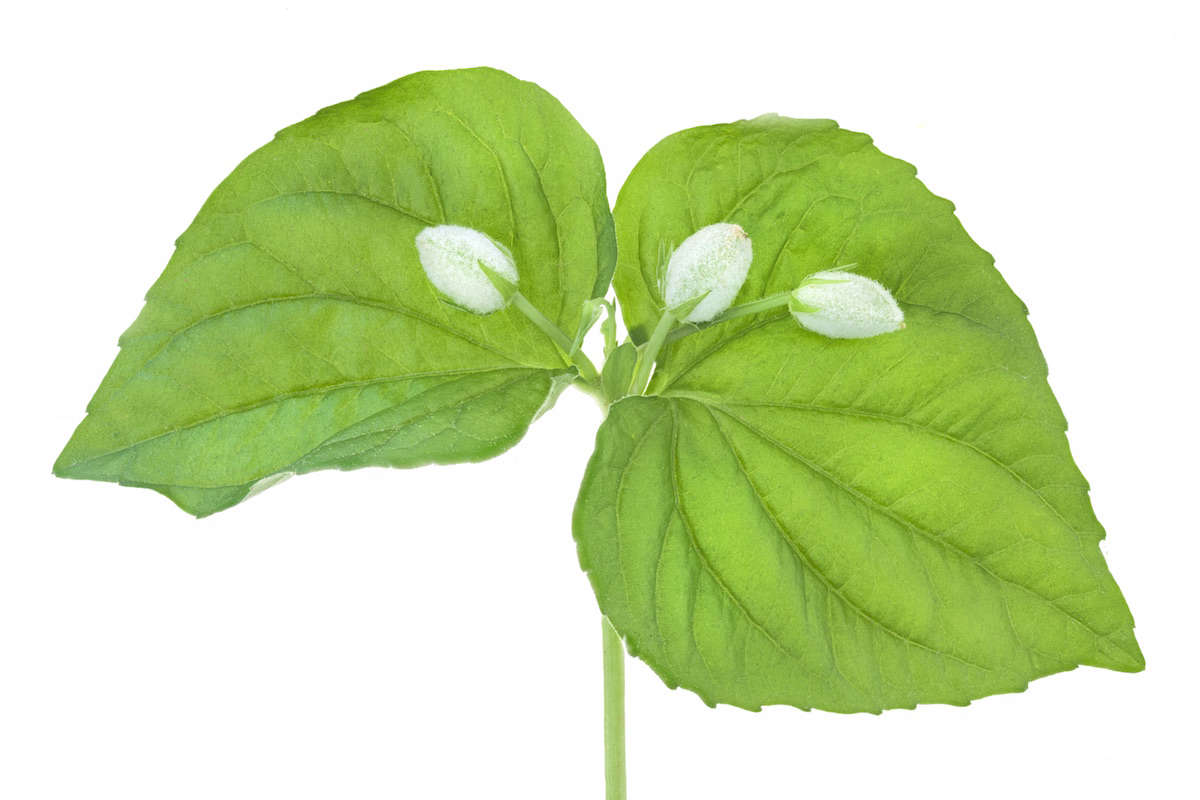 Above: The seeds of violets have several clever tactics: Once pollinated, former flower stalks bend down and form seed capsules under or within the leaves, safely out of view of predators. When the capsules dry and eventually contract, they shoot violet seeds in all directions, sometimes several feet away. 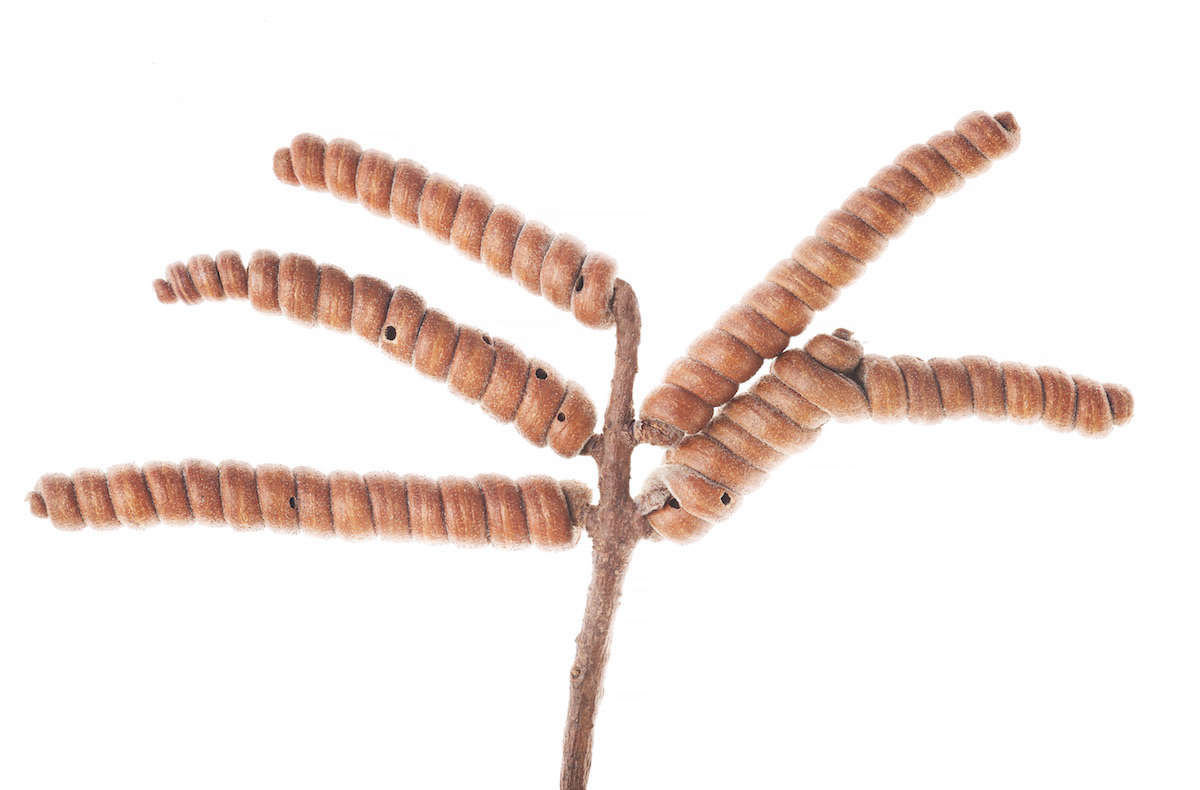 Above: “These pods take self-defense to a whole new level,” writes Dunn Chace of the screwbean mesquite. Their hard shell is tightly coiled, deterring attempts by predators to open them along any seams. The technical word for this is indehiscent–”not going to split open on its own.” 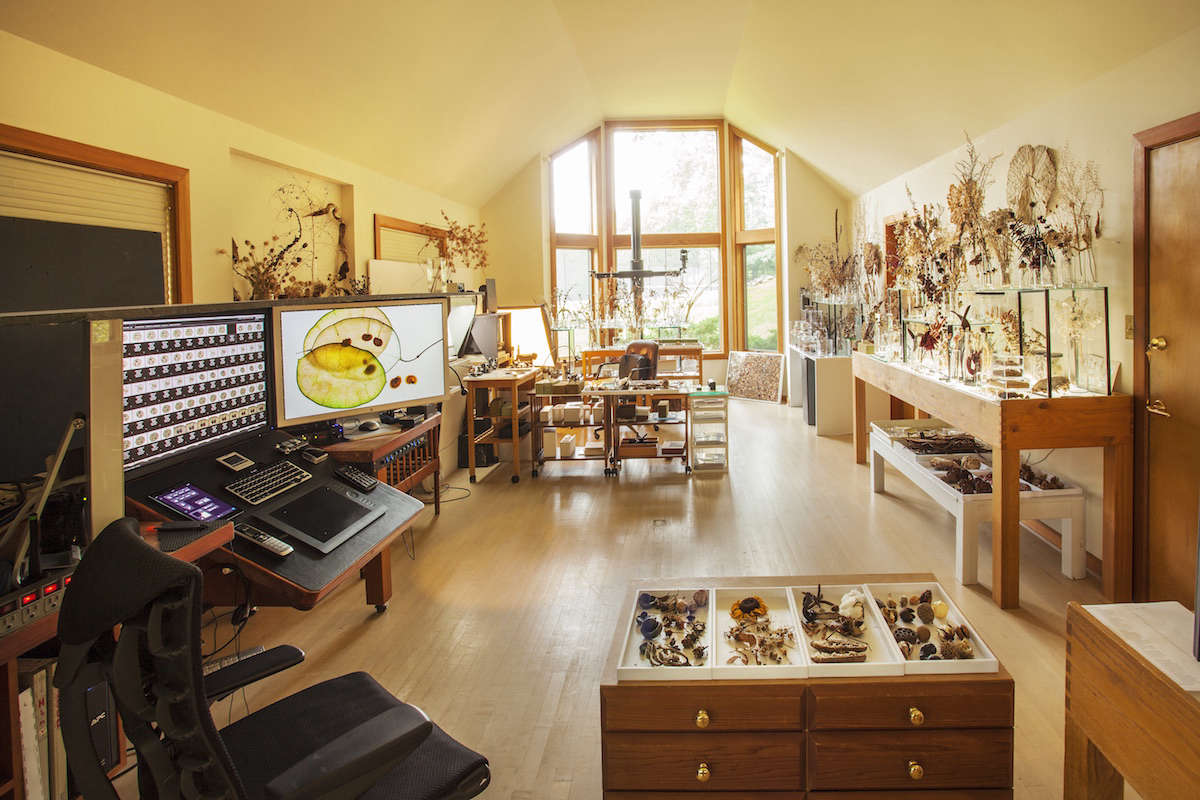 Above: Photographer Robery Llewellyn’s studio where he created the photographs using a technique called “image stacking.” He takes photos from many slightly different angles, then stitches them together with software developed for miscroscopes. This allows every part of the picture to be in sharp focus. 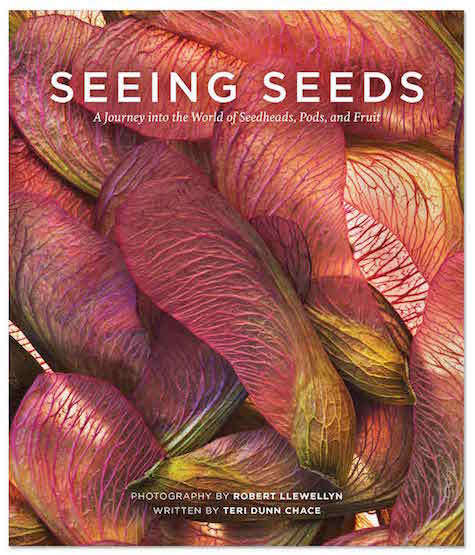 Above: Seeing Seeds from Timber Press is $20.62 on Amazon.

More books worth a look:

Seeing Seeds: A Journey into the World of Seedheads, Pods, and Fruit

In collaboration with: Enter to Win: $1,000 Giveaway from Dara Artisans

by Michelle Slatalla
May 10, 2021
Read all recent posts