We were a group of seasoned garden writers at the NYBG press preview of The New York Botanical Garden’s Impressionism: American Gardens on Canvas.  We listened attentively, took notes, and asked a curator politely to explain the floral Impressionist paintings on display. However, later, when we were admitted to the greenhouse to see an actual garden based on the paintings, many of us totally lost our cool.  Notebooks and tape recorders momentarily forgotten, we rushed to the flowers, jostling to get our faces as close as possible to the blooms and greedily snapping photographs. Classic formal gardens and sophisticated modern landscapes with restrained palettes can be pleasing to the eye, even soothing to the soul.  But a perfumed riot of color, the so-called old fashioned “Grandmothers’ Garden,” really does make the heart beat faster. 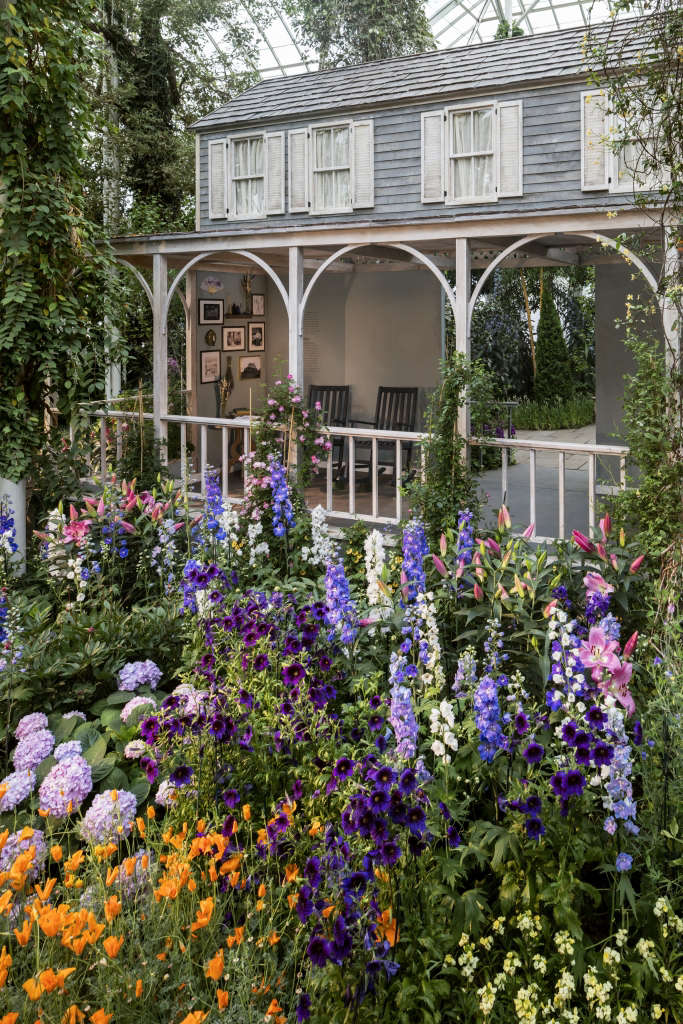 Above: For the home enthusiast who wants to recreate the kind of nostalgic garden celebrated by American landscape painters of the turn of the 20th century a trip to the Bronx will be quite worthwhile.  The New York Botanical Garden’s Impressionism: American Gardens on Canvas, the latest in a series of shows exploring the connections between plants and the arts, offers a wealth of inspiration. 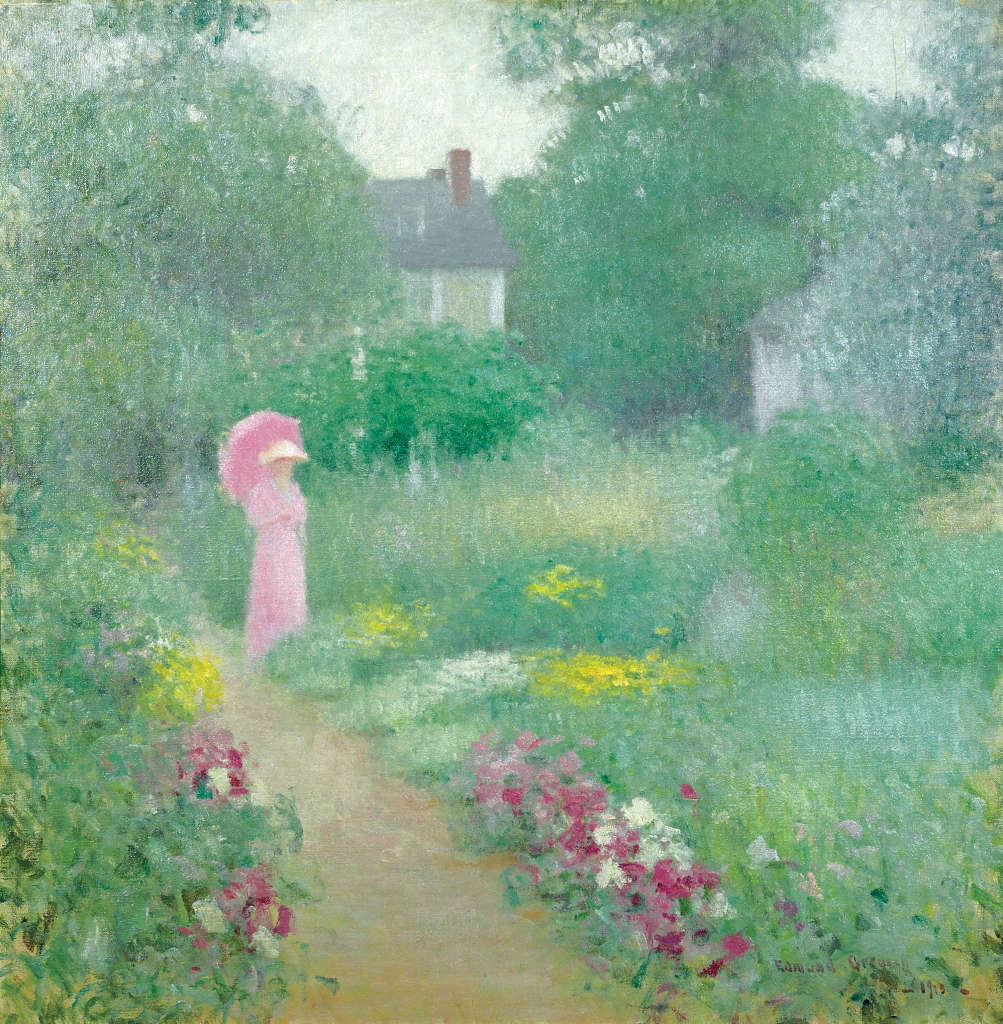 Above: The 20 or so paintings on display in the LuEsther T. Mertz Library gallery, all by impressionists from the Northeast, revel in the unrestrained abundance of flowering plants. The artists eschewed the meticulous detail of botanical art and went for a blur of color. Clumps of flowers often appear as brilliant smudges, as if you are looking at them through squinted eyes.  Yet even as these works only suggest the places they depict, the effect is visceral: you long to be transported to those gardens.

Above: The living plant display created by NYBG’s horticulturists in the Enid A. Haupt Conservatory is not based on any one painting or garden.  It is a fantasy combining many elements that appear in the paintings.  Literally tens of thousands of cornflowers, larkspur, hollyhocks, peonies, irises, roses, asters, and columbines are massed together.  No matter that in nature all these bulbs, annuals, shrubs, and perennials would never bloom at the same time or thrive under the same conditions. 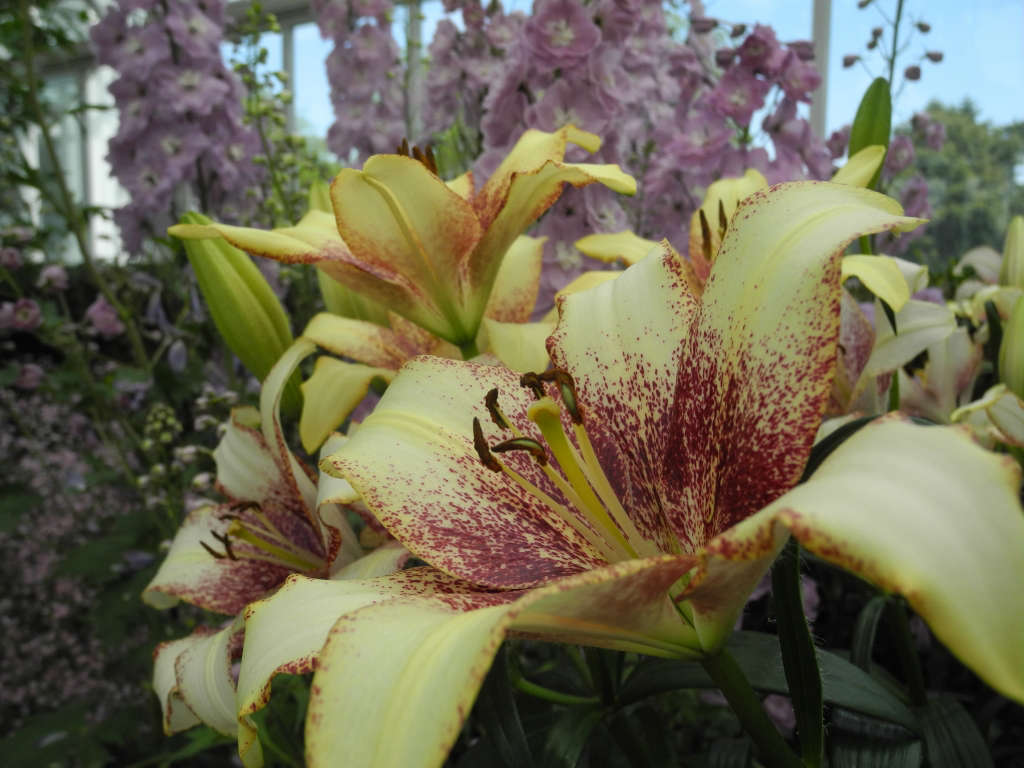 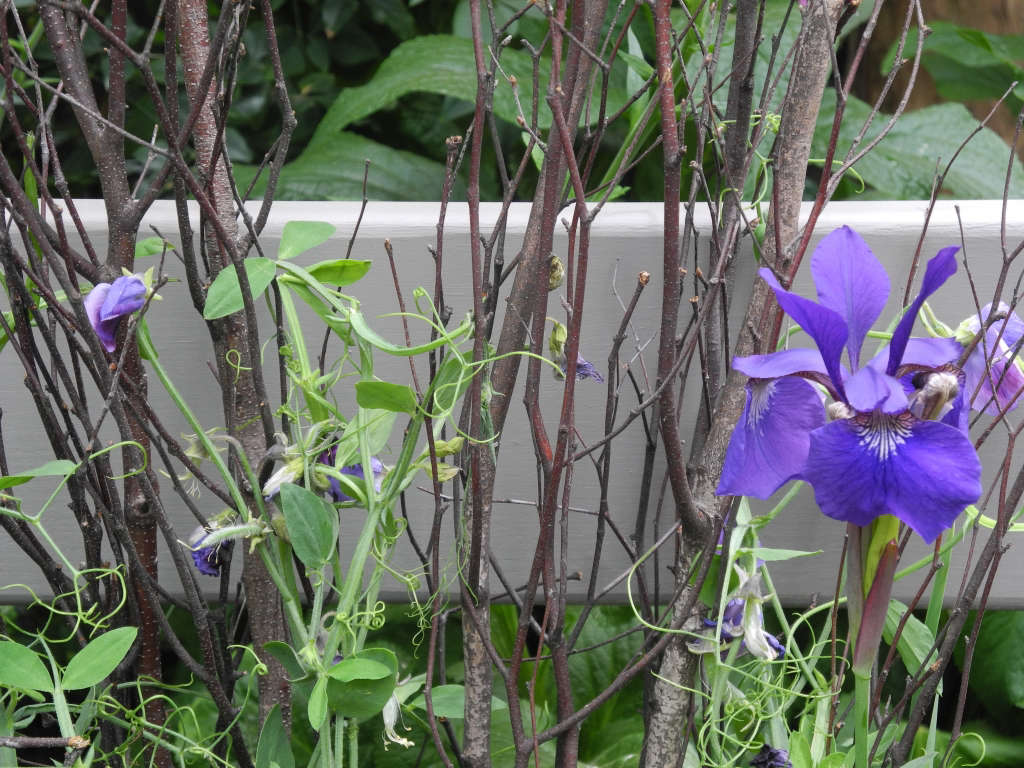 Above: Even very familiar plants can look fresh when they are planted together creatively. Here sweetpeas are trained to climb up bare branches behind a mass of brilliant blue Siberian iris. 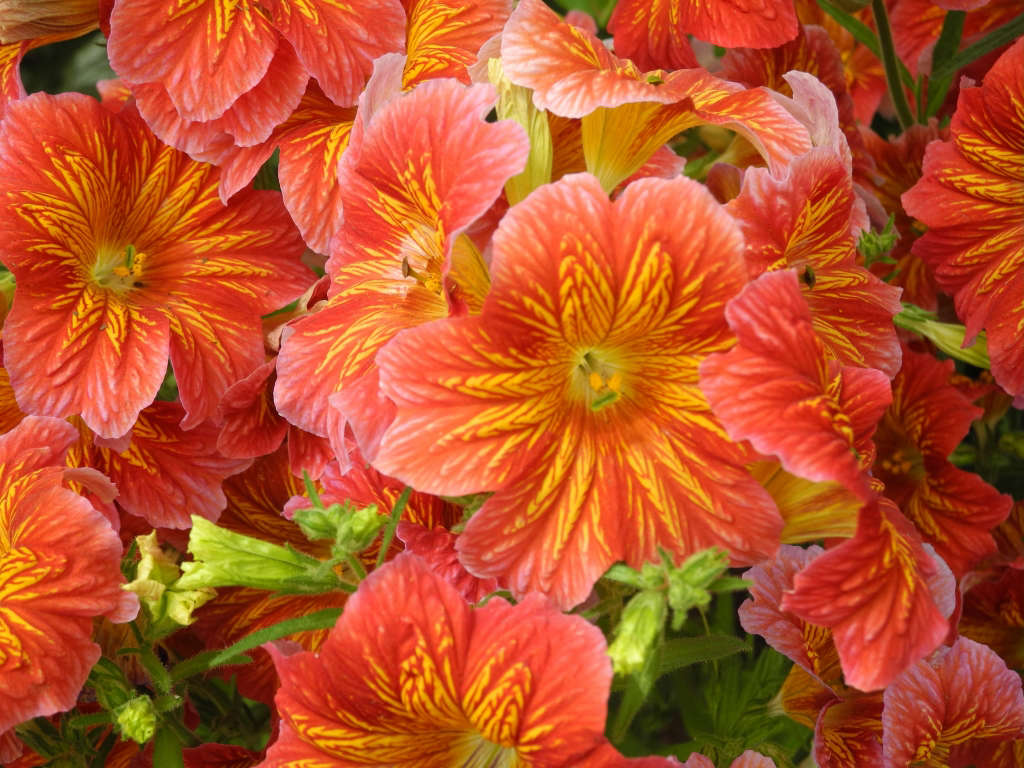 Above: Unusual plants add interest. Salpiglosis sinuata or “painted tongue”, a South Africa native,  is used in both red and blue versions.  The red, Royale Red Bicolor, is a real show stopper with gold stripes that seem to explode against its tomato colored petals.  The takeaway here is be fearless and imaginative in your flower choices.  A little research into less well known plants can yield dramatic results both in the garden and for cutting. 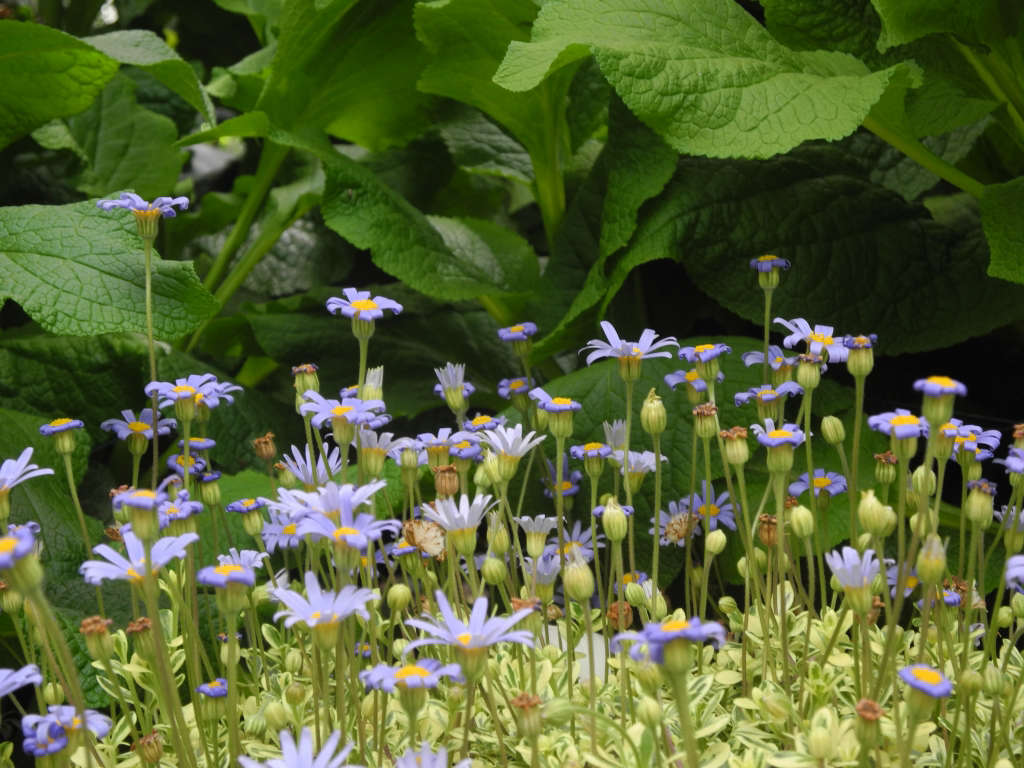 Above: Making bold plant choices doesn’t have to be limited to just uncommon flowers.  Variegated foliage adds interest by bumping up the visual impact of these blue daisies (Felicia amelloides “Variegata”)  and can help to lighten up a dark corner. 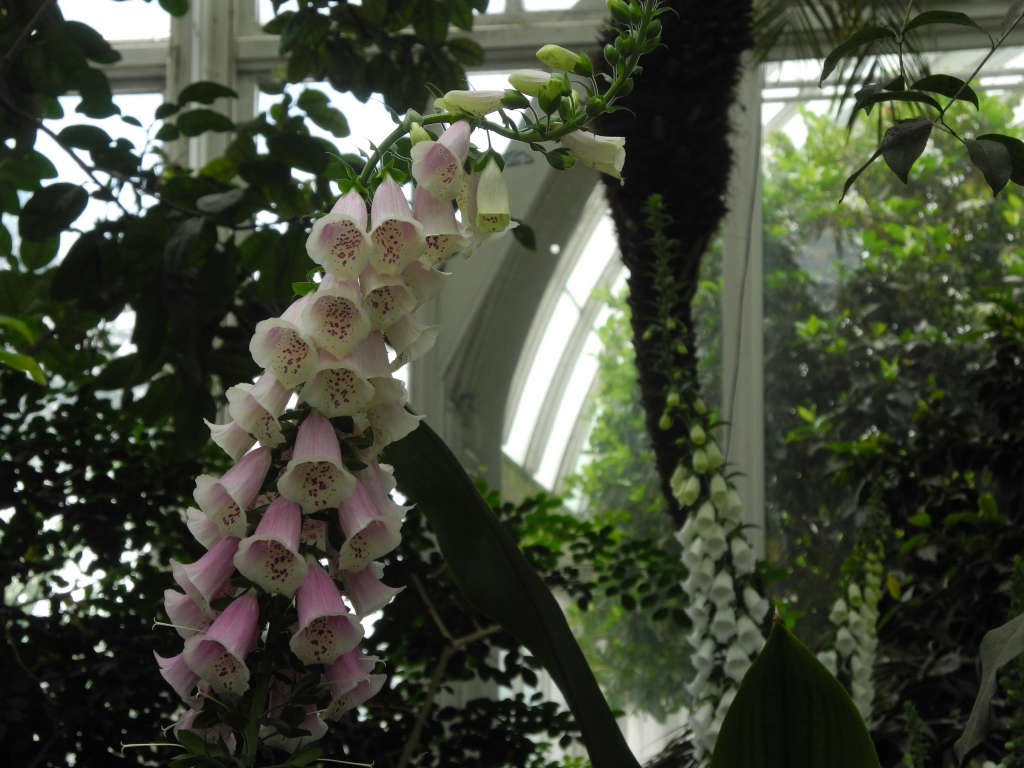 Above: The NYBG Impressionist garden gets a lot of its impact from its broad range of plant sizes, particularly the liberal use of towering varieties of digitalis, cleomes, sunflowers, and hollyhocks which sometimes appear with tiny versions of pansies and forget-me-nots as neighbors.  The message is clear.  Don’t be afraid to mix it up.  This is no standard border with plants arranged rigidly by height as if they are posing for a class photo. 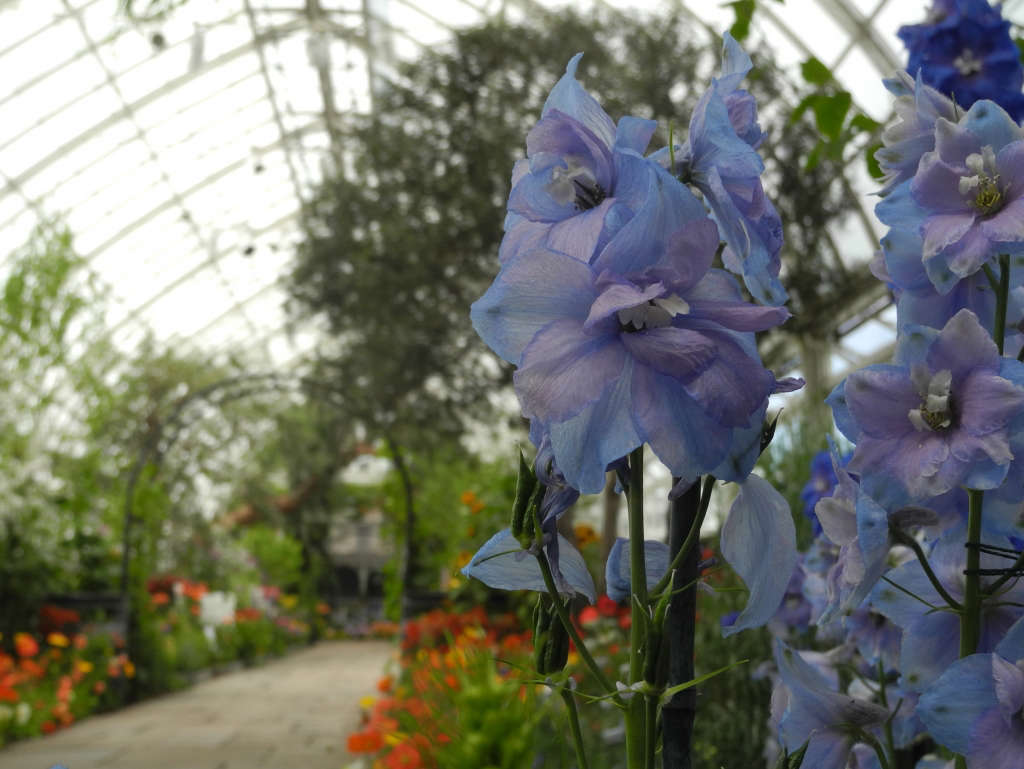 Above: Come to NYBG and study the paintings and the garden they inspired.  Use it as a model for your own garden, but don’t forget the Impressionist garden is make believe.  Horticulturists will be on hand every weekday removing the spent blossoms and replacing the plants that aren’t thriving.  Unlike our own gardens, this one will never not look its very best. 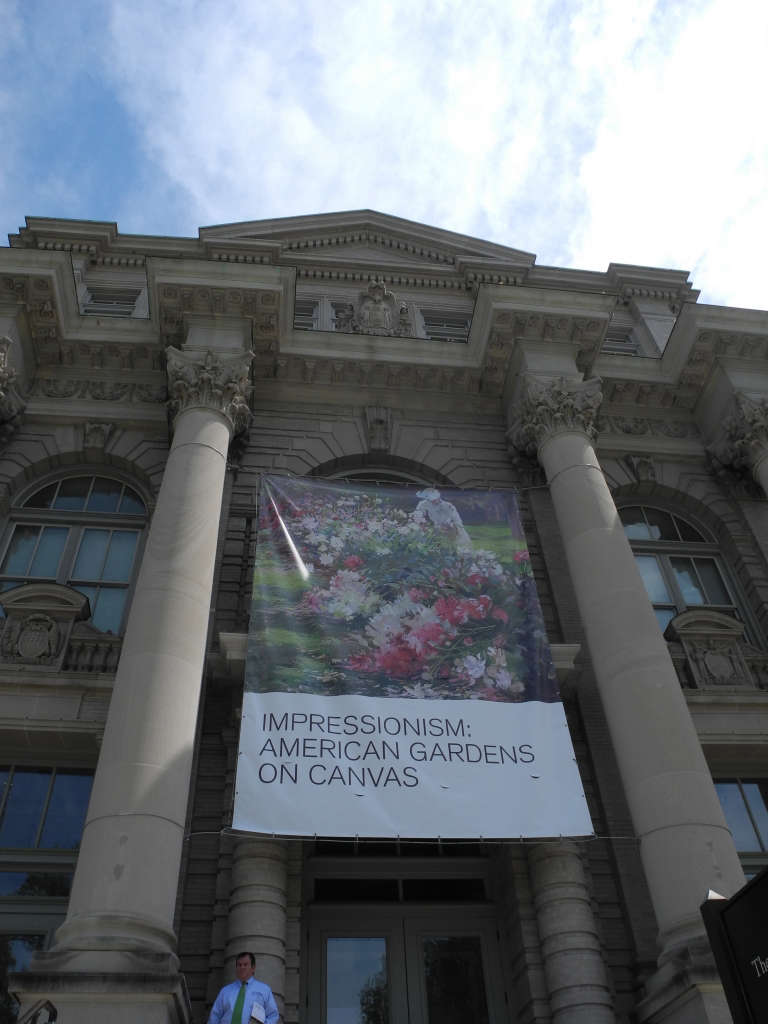 Above: Impressionism: American Gardens on Canvas continues at the New York Botanical Garden through September 11.