Are you tired of hearing the same old obvious tips about how to take care of houseplants? We certainly are. These days the Internet seems to regurgitate more than it enlightens. Not this time. I put on my sleuthing hat to coax experts to reveal their secrets for growing plants indoors.

Have you ever wondered how to repot a spiny, sharp cactus or how Instagrammers actually persuade those vines to climb a kitchen wall to drape cunningly over a shelf of mugs? Here are the answers—10 secrets to successful houseplants:

1. How to Repot a Cactus

If you’ve tried to repot a cactus, you’ll know it can be agony: it’s nigh-on impossible to avoid a run-in with all those spines. Often the advice is to wrap a strip of newspaper around the plant, but this isn’t particularly effective. Instead, be inspired by Stan Griffin and Vicki Newman of Chelsea flower show exhibitors Craig House Cacti in West Bromwich, England, who wrap cacti in bubble wrap when repotting.

All the spikes get lodged in the plastic rather than your skin, and the cactus has a protective carapace during the process.

2. How to Propagate String of Hearts

Have you ever noticed the tiny potato-like lumps on your string of hearts (Ceropegia woodii)? These tiny aerial tubers which grow at the bases of the leaves give this trailing plant one of its other common names, rosary vine, as they look like beads on a string. And they make it super-easy to propagate your plant. Susan Mahr, Statewide Master Gardener Program Coordinator at University of Wisconsin-Madison, advises that you simply press a tuber into moist compost in a separate pot to the parent plant, but don’t detach it yet. Wait until you see signs it has rooted and growing under its own steam (this can take weeks or months) then cut it away from the parent plant.

3. How to Feed an Air Plant

We’re all clued into the fact that although air plants may not need watering like conventional plants, they do need misting regularly (if the leaf edges begin to roll up, that’s a sign they’re too dry). But did you know that if you want to get fat, healthy Instagram-ready Tillandsias, you should feed your plants too?

Standard houseplant fertilizers don’t contain the right mix of nutrients for these epiphytic (tree-dwelling) plants, so you need to buy a specialist product: if you’re in the UK, try Tillandsia specialists Crafty Plants’ mist-on Tillandsia Feed (£2.99): US growers can try Epiphyte’s Delight ($4.50 from Rainforest Flora) or Airplant City’s Air Plant And Bromeliad Fertilizer Packet ($4.75). The experts at Airplant City advise that you also can fill your mister with pond or freshwater aquarium water: the good news is this water contains enough nutrients that you don’t need to buy a separate feed.

4. How to Pot Succulents in Cat Litter

Cacti and succulents are one group of houseplants that just won’t thrive in bog standard compost. Most desert-dwelling cacti and succulents need sharp drainage, so that water doesn’t hang around the roots and cause rots. Every succulent specialist will have her own secret recipe for compost: I tend to follow the Royal Horticultural Society’s advice, which suggests mixing soil-based compost John Innes No 2 with up to 30 percent extra grit or fine gravel by volume.

But those in the know at the British Cactus and Succulent Society use a special ingredient in place of the grit or gravel: something from the pet aisle of the supermarket. Cat litter. So far, so weird, but hear me out. Cat litter has two advantages over grit or gravel. It’s lightweight, which is an advantage when moving pots about, and unlike grit it is porous. This means it can “mop up” excess water from around the roots and release it gradually, as well as ensure there are tiny air pockets in the soil, which is a great combination for cacti and succulents.

The exact ratio of compost to grit to litter depends on who you ask, but two parts compost to two parts litter to one part grit isn’t a bad place to start. Just make sure you buy cat litter marked “low dust” that doesn’t have any chemicals added to it.  (The brand often recommended in the UK is Tesco supermarket’s own brand low dust cat litter.)

If you’ve lusted after those Instagram images of climbing plants creeping up walls, you may be wondering how to achieve the look at home. Unless you grow a self-clinging plant such as ivy, which generally doesn’t thrive indoors, you will need to provide some kind of  anchor point for your plant.

Plant hoarder Jamie Song (47,000 followers on Instagram) uses Command brand clear plastic outdoor light clips for attaching his neon Pothos to the wall, holding the delicate stems in place without damaging them, or ruining the look of the wall.

6. How to Get Rid of Fungus Gnats

Probably the houseplant’s biggest bugbear (excuse the pun) are fungus gnats, whitefly, and aphids. Yellow sticky traps are often recommended as a way of controlling these pests, but how do you get the most out of them?

Suzanne Wainwright-Evans is an ornamental entomologist specializing in integrated pest management, or in layperson’s speak, she’s the woman you need to solve all your houseplant-bug issues. She points out that in commercial plant production facilities, yellow traps are used to monitor populations of pests rather than as a way of controlling them. They can be a handy (and thrifty) way to make sure pest populations don’t get out of hand, but there’s an art to positioning them correctly.

For one thing, be extremely careful you don’t let them touch the leaves of your plants. Wainwright-Evans says that research into trap use in outdoor growing facilities showed that they perform best if they are facing south, because the way the light is reflected off the card that makes them attractive to insects. “This is hard to do indoors, so if I were using them inside I’d probably stand one upright and lay another flat on the soil’s surface to see which ways you can trap the most under your conditions,” she explains. And if you really want to get on top of a fungus gnat issue, try using the biological control Steinernema feltiae, a microscopic nematode worm that wipes out these pests safely and quickly. (Have a listen to episode 19 of my podcast On The Ledge for the full lowdown on fungus gnat control.)

7. How to Divide Pitcher Plants 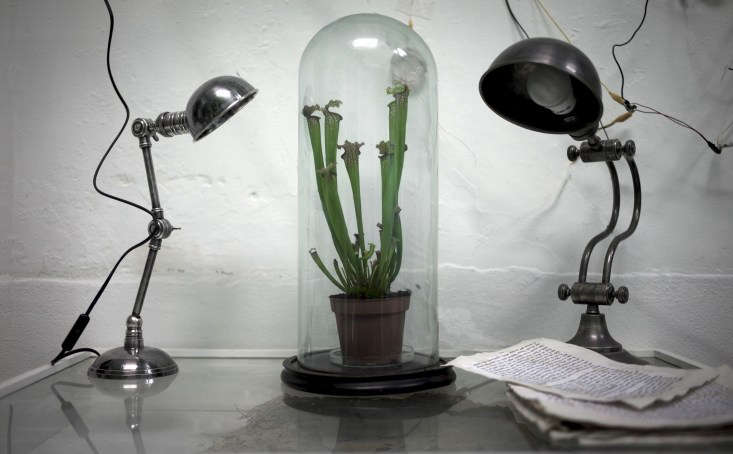 What do North American pitcher plants (Sarracenia) and irises have in common? Not much, you’d think, but in fact they both grow from rhizomes, a thick underground stem. And that means it’s easy to expand a carnivorous collection by dividing mature plants.

Tom’s Carnivores, an online growing guide to a whole range of insect eaters, recommends dividing Sarracenias towards the end of winter, when they are reaching the end of their winter rest period. “Carefully split the rhizome into multiple pieces—each with its own root system and a couple of growth points—and pot them up separately,” Tom says. “Come spring, you’ll have new growth sprouting from multiple plants.” Read more about Sarracenia care here.

8. How to Grow an Umbrella Plant

If you are forever killing your houseplants with kindness by overwatering them, the umbrella plant, Cyperus alternifolius, is the one for you. It hails from Africa where it grows on marshy land, and so it thrives when planted in a glass jar filled with water and a dash of sandy soil. In the fascinating book Potted Histories, authors Paul Simons and John Ruthven explain how these plants—which belong to the sedge family—overcome the water-logging of their roots by using a “labyrinth of air-filled channels” in their stems and roots that allow oxygen to reach all parts of the plant.

And they reveal a fascinating way to propagate this plant: just cut off a leaf stalk and its umbrella of bracts and place it upside down in some water. The authors point out: “This may seem strange but as they grow naturally in marshes and by waterways, and the plants bow down towards the water, new shoots can often be submerged.” When your new plant is established you can pot it up (right side up) into its own jar.

9. How to Leave Well Enough Alone

Have you noticed tiny white crystals on the undersides of your Chinese money plant, Pilea peperomioides? I have, and I’ve found it extremely difficult to locate any useful advice on what these crystals are and whether to worry about them. I tracked down anecdotal talk on various plant forums that these structures are calcium crystals: not content with that, I went on searching and found an academic paper which looks at calcium crystal formation in various plant families including Urticaceae, the family to which Pilea peperomioides belong. It seems that these crystals are a normal thing for these plants, and the paper concludes that “The presence of crystals is certainly not detrimental to the plant.” Phew.

And finally, a tip from me. There are only 10 mentions of it on Instagram right now, but I’d love Crassula umbella to be the next indoor “it” plant. It’s a wonderfully bonkers-looking succulent with circular cup-like foliage whose flowers poke out of the center of each leaf. (Its common name is wine cup.) Since stumbling across it I can think of little else. It seems I am not alone.

$7.99 USD from Amazon
Other Cacti & Succulents

£12.50 GBP from The Fresh Flower Company
Other Cacti & Succulents

Current Obsessions: The Garden Apartment (and a Giveaway)

Plant Doctor: How to Save a Dying Houseplant