The question that occurred to me the other day, as I was huffing and puffing my way up one of the steep switchback trails that crisscross the mountain in my town, was this: Why must a hike be so onerous? The next day I headed over to the gentle swells of Golden Gate Park for a stroll through the San Francisco Botanical Garden’s collection of native plants. And I thought: That’s more like it.

Of course I wasn’t exactly in a relaxed frame of mind upon arrival, having driven around for 15 minutes in search of a parking spot that wouldn’t draw the attention of what must be the largest, most dedicated army of meter maids in any city in America.  After a few attempts at decoding the fine print on a sign purporting to demystify the complexities of the local parking regulations, I consigned my car to fate and bustled over to the entrance gate–five minutes late.

There I was greeted by the lovely sight of Don Mahoney, the garden’s chief curator and my tour guide, hitching a ride from the garden’s nursery on a golf cart that was ferrying potted plants to the gift shop. He said, upon alighting, “Let’s walk the long way over to the native garden, don’t you think?”

And suddenly the stress started to melt away. It was warm, it was sunny, and the afternoon lay ahead. There are 55 gently meandering acres in the botanical garden, with roughly 8,000 different kinds of plants from around the world organized into distinct “gardens” that display collections from Asia, from Africa, from Chile, from the Mediterranean–and from our local California environs. (Now is the time to go: California natives are at their gaudiest from now through mid-summer, as successive waves of wildflowers burst into bloom.)

By the time we reached the Arthur L. Menzies Garden of California Native Plants, we’d passed the “please-touch” collection of scented plants (where visitors can rub leaves between two fingers to release the scent of various herbs) and stopped to admire 100-year-old rhododendrons with trunks as thick as trees. And then we saw the little purple irises:

Above: Throughout the California natives garden, naturalized clumps of irises edge walkways and cover grassy meadows. In bloom from now until mid summer, Iris douglasiana is visible in a range of colors, from deep purple to white-striped flowers.

The only problem, says Mr. Mahoney, is that the wildflowers can be irresistible. “Once we got a call that a couple had spread out a blanket in the middle of them to have a picnic,” he said. Lovely idea, but trampling “ruined them for the season.”

If you want to grow your own meadow of flowers, a packet of Iris Douglasiana seeds is $5 from Larner Seeds.

Above: Native to southern Oregon and Northern California, Rhododendron Occidentale is $10 per plant from Far Reaches Farm.

A California buckeye tree, Aesculus californica, has plenty of space to grow to its full size; it looks ancient and gnarly. The ancient part is an illusion, says Mr. Mahoney; the tree is only a few decades old.

Above: A small plaque in the grassy area beneath the buckeye identifies it for passersby.

Above: Known as the California lilac, ceanothus comes in about 50 different varieties; it has a lovely fragrance that always reminds me of a cake baking.

Above: A low-growing variety, Ceanothus Hearstiorum creates a mat-like groundcover; a plant in a 1-gallon pot is $12 from Bay Natives.

Above: A semi-secluded bench named in honor of Gavin Newsom’s mother Tessa; sometimes the lieutenant governor stops by for a visit and quiet contemplation.

Above: Fragrant lilacs developed to thrive in San Francisco’s mild climate are known as “low-chill” varieties. This specimen was donated from a private garden.

Above: The oldest low-chill Syringa vulgaris is ‘Lavender Lady,’ developed in California 30 years ago by hybridizer Walter Lammerts. A Lavender Lady Lilac in a 5-gallon pot is $69.98 from Clifton’s. 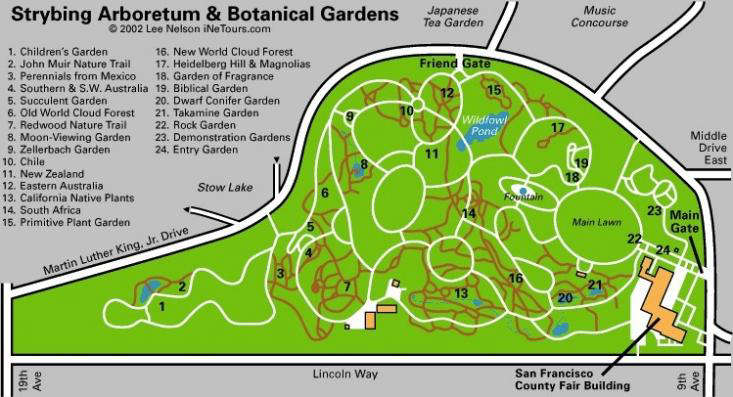 Above: For a downloadable walking map that identifies highlights of the California natives garden, see SF Botanical Garden.

Above: The botanical garden is preparing for its annual public plant sale–which will be the first weekend in May–and so Mr. Mahoney eventually had to head back to a meeting at the nursery. Left to find my own way out, I wandered past a meadow of native perennial grasses, a shady grove of ferns, and more massive rhododendrons. By the time I reached my car, the time had run out on the parking meter. But guess what? No ticket. What a magical city.

No matter where you live, we have a hike to recommend. See all of our Hikes of the Week.

Finally, learn how to successfully design a fence for any landscape or garden project with our Hardscaping 101: Fences & Gates guide.

A Museum of Plants: Centuries of Dried Flora and Fungi at the New York Botanical Garden’s Herbarium