Modernist architect Philip Johnson, perhaps best known for his urban work like New York CIty’s former AT&T building and the classic Four Seasons restaurant, used to refer to himself as a landscape artist.

Architecture and landscaping, Johnson once said, are “one art.” At his own home, the Glass House in New Canaan, Conn., where he lived for almost 60 years until his death in 2005, he deliberately made the walls between the two virtually invisible. We got permission to photograph the secluded 49-acre property at dawn. Join us for a tour: 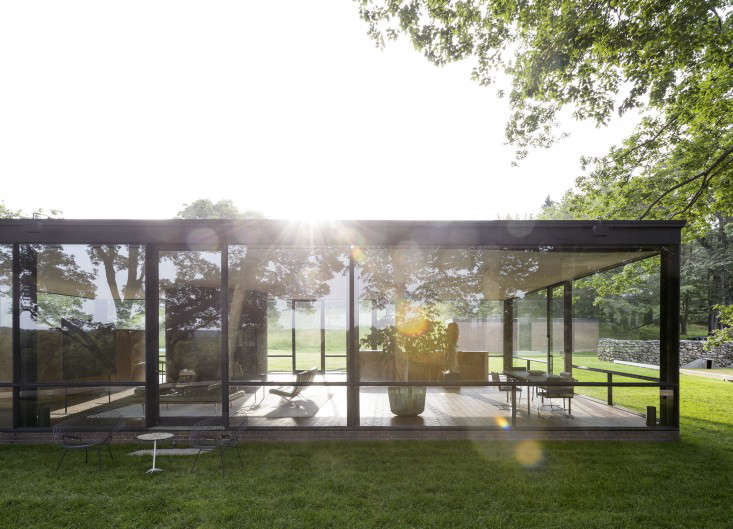 Above: From inside the shimmering box, perched on a promontory overlooking a pond, the view of apparently untamed New England forest and unmown grass was actually carefully planned and pruned to resemble both the naturalistic gardens of 18th and 19th century Europe and the midwestern farmland of his Ohio childhood. 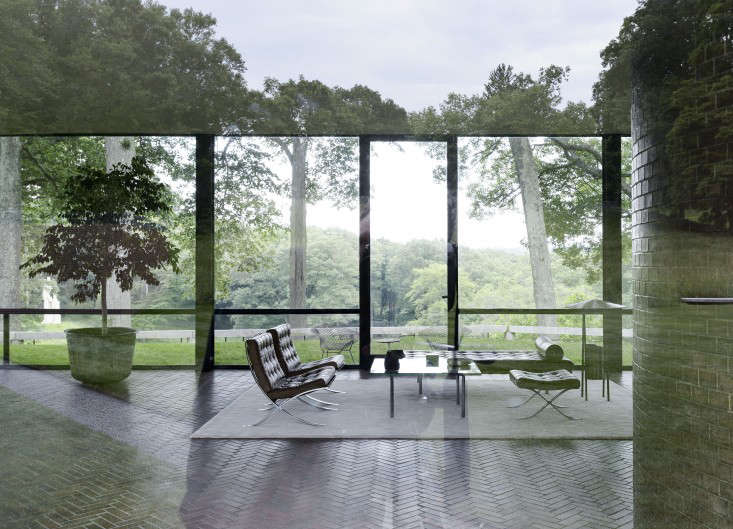 Above: “This was their house in landscape,” says architectural historian Hilary Lewis, who walked the property with Johnson countless times and collaborated with him on his memoirs. “He used to call it a permanent camping trip. He would get cross with me because I didn’t know my trees.” 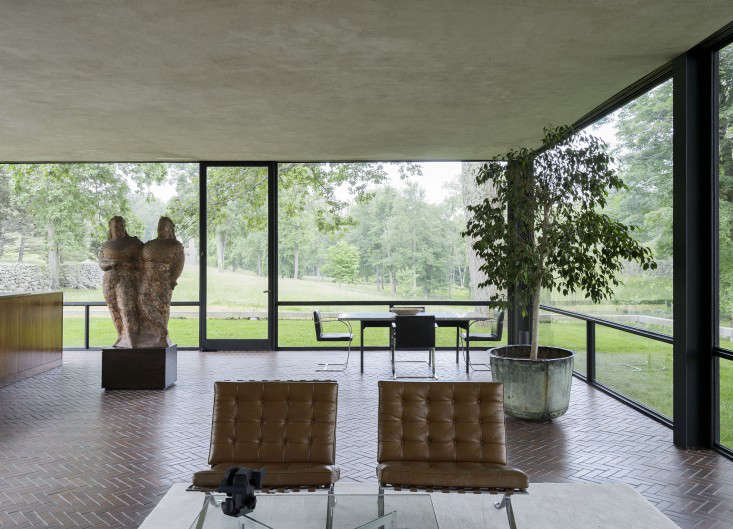 Above: Inside the house, Lewis says, Johnson carefully chose and placed every bit of furniture, rectangles with rectangles, on warmly colored brick floors–with a ficus tree in a cylindrical copper British laundry urn as “punctuation” that helped extend the landscape indoors. But it was the view that commanded most of his energy and attention. Even the grass, which comes right to the edge of the house, is an architectural element, a square of green, kept mowed and trimmed with grass shears. 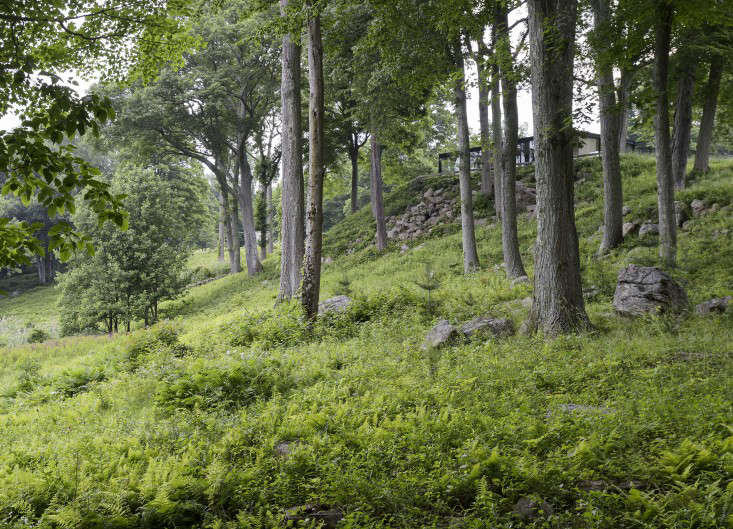 Above: Johnson and his partner, David Whitney, were passionate about the trees and wanted light to penetrate to the bottom of the forest floor. Working with arborists, they carefully removed branches and trees from the forest of mostly second-growth oaks, maples, and elms to create alleys of light and to make it look like a more mature woods. “The basic building block of the place was trees,” says Lewis. “He was a man who wore Wellies and walked around the property pretty much every day.” The Glass House trust maintains Johnson’s vision by cutting and clearing the undergrowth every late fall/early winter by hand, while the meadows are cut about three or four times a year. 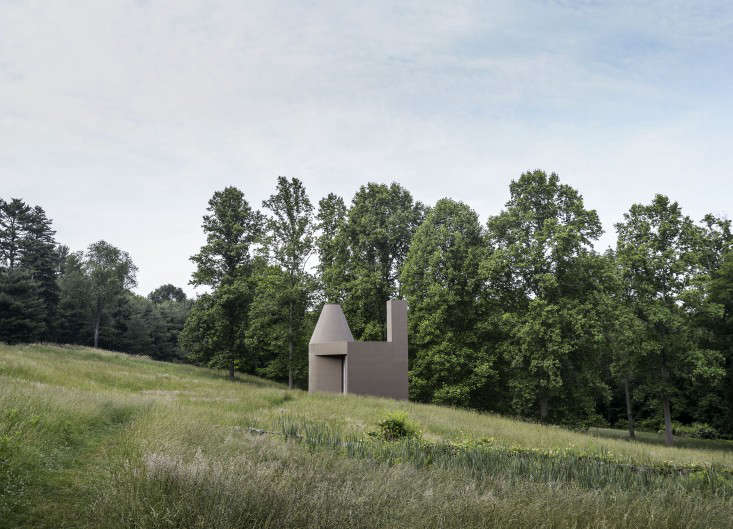 Above: The original Glass House was built in 1949, but over the years Johnson and Whitney added both land and buildings to the estate. Now open to the public for tours, the Glass House property covers about 49 acres and one can visit a series of 14 structures, including Johnson’s study, The Library (shown).

“The buildings,” says Lewis, “punctuate the landscape. They were designed to be an interesting location to pull your eye towards or walk towards.” The grasses are kept mown at different heights, with the house on a tightly mown square of green, higher grasses beyond that, and still higher after that. The architect loved to walk through the grass, and it is now maintained to look as if he still made his way to the Library daily. 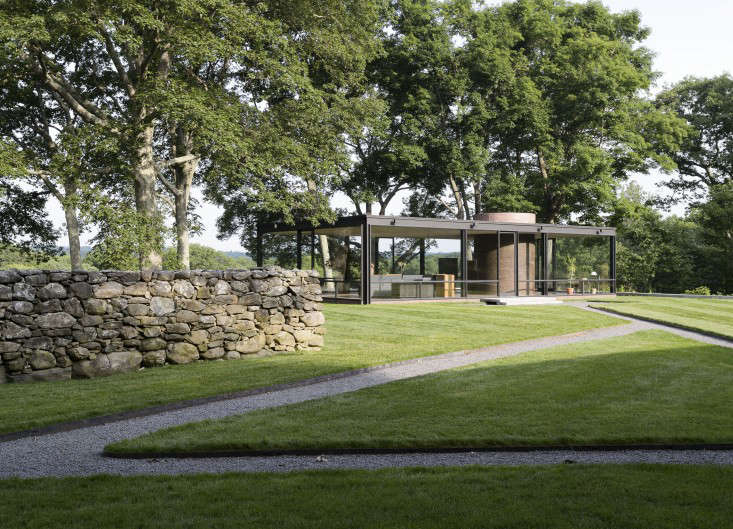 Above: When Johnson acquired the land, he found a number of old stone walls from early farming days, which he loved, preserved, and added to. Here he built a wall to help with the hide-and-reveal of the house and driveway. Even the smallest details are full of intention: The gravel path has small steel borders that allude to the sculptures of Frank Stella. 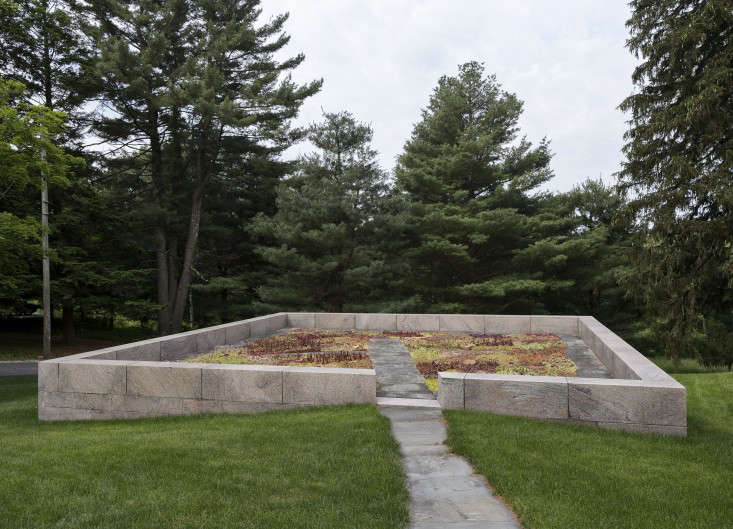 Above: In 1980, Johnson and Whitney acquired additional land, including Calluna Farms, a shingle house that was Whitney’s domain. Behind the house Whitney created a succulent garden enclosed by the pink granite from the same quarry that supplied the stone for New York’s AT&T building (now the Sony Building). 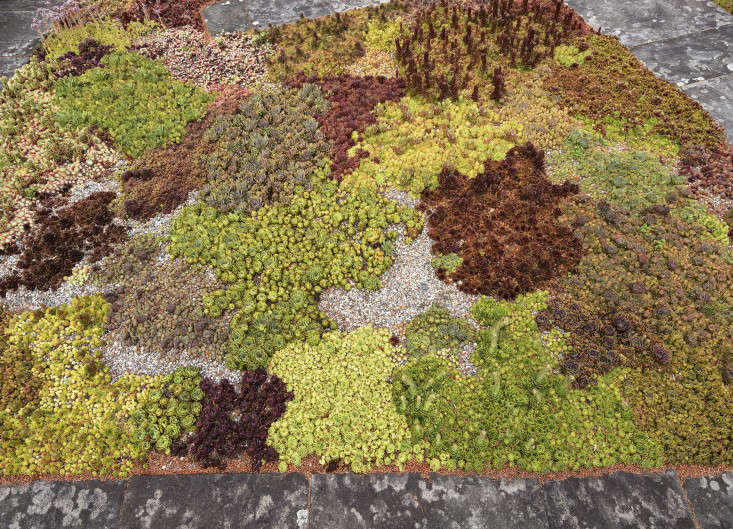 Above: The layout for the garden, which is planted with hens and chicks succulents, was inspired by a pencil drawing by Kazimir Malevich that Whitney had bought earlier that year. 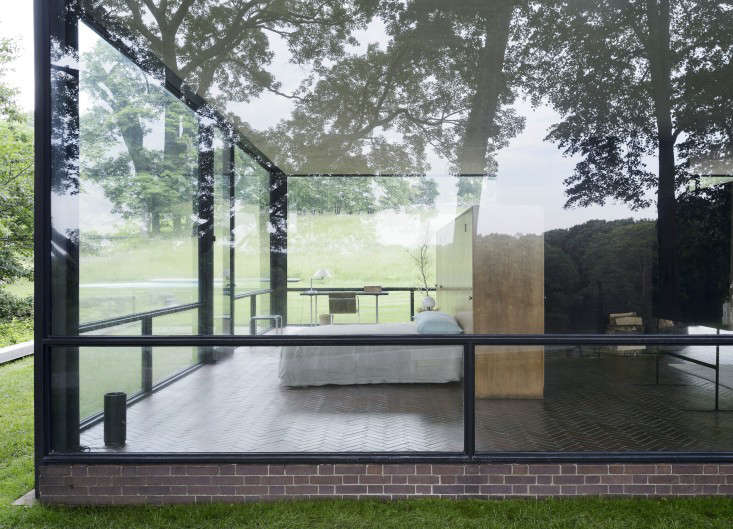 Above: Johnson’s bedroom. He once said that the Glass House was the only place in the world where one could see “the sunset and the moonrise at the same time, standing in the same place.” It was a home both within nature, and of nature.

For more of our favorite modern landscapes, see:

Gardenista Pop-Up Market: Join Us at GROW London in June