Once again it is time to give a salute and thanks for the many stalwart garden plants we have inherited from our southern neighbors. Beauties that we commonly choose for dependable color and interest in our landscapes such as passionflower, fuchsia, nicotiana, nasturtium, alstroemeria, and many orchids were originally discovered growing as natives in the rain forests, and on the steppes and stony slopes of South and Central America. That also is true of the petunia, a plant that has been a favorite of gardeners since Queen Victoria was on the throne.

These days the cheery sight of petunias is so common that it’s easy to take them for granted. Let’s not. Read on to learn how these colorful flowers traveled to your garden (and how to help them flourish).

European plant hunters in the mid-1700s discovered petunias in South America and, after an introduction into Europe in the early 1800s, they quickly became a popular choice for the sumptuous flower gardens of the Victorian era.  However, those early petunias were not the lush, brilliantly colored blooms we know today.  The flowers were small, limited to either white or purple, and the plants themselves tended to be rather lanky and unimpressive.

Fortunately, by the late 1800s breeders in several countries including Germany, England, Japan, and the United States were hard at work to produce plants with larger blooms and an ever-widening array of colors and flower forms. Today the staggering number and variety of petunia hybrids continues to explode. Most petunias sold today in nurseries are varieties of Petunia x atkinsiana.
The mainly funnelform (tube-shaped) blossoms can now range from one to five inches wide. Colors include the basic and ever-popular white as well as pink, red, lavender, magenta, yellow, purple, violet, and even black. Flowers are frequently striped, speckled, edged in a contrasting color (such as white or even chartreuse) or have centers that are round or star-shaped in hues either lighter or darker than the rest of the flower. To further boggle the mind, there are double blooms that look like miniature peonies and fancy varieties with dainty ruffled edges.

Today’s gardeners and designers seem to be taking full advantage of the bounteous assortment of petunias available.  It seems that everywhere I walk here in New York City this summer, window boxes and containers of all shapes and sizes are overflowing with this fragrant flower. It is ubiquitous but, with so many pleasing forms and its ability to harmonize so beautifully with other annuals such as geraniums and salvias, petunias still manage to be fresh to the eye.

Given the right conditions and some reasonable regular maintenance, this fragrant relative of the tomato, potato, eggplant, and tobacco will reward you with nonstop blooms well into fall.

Here are some tips if you would like to up the flower power in your garden with petunias. 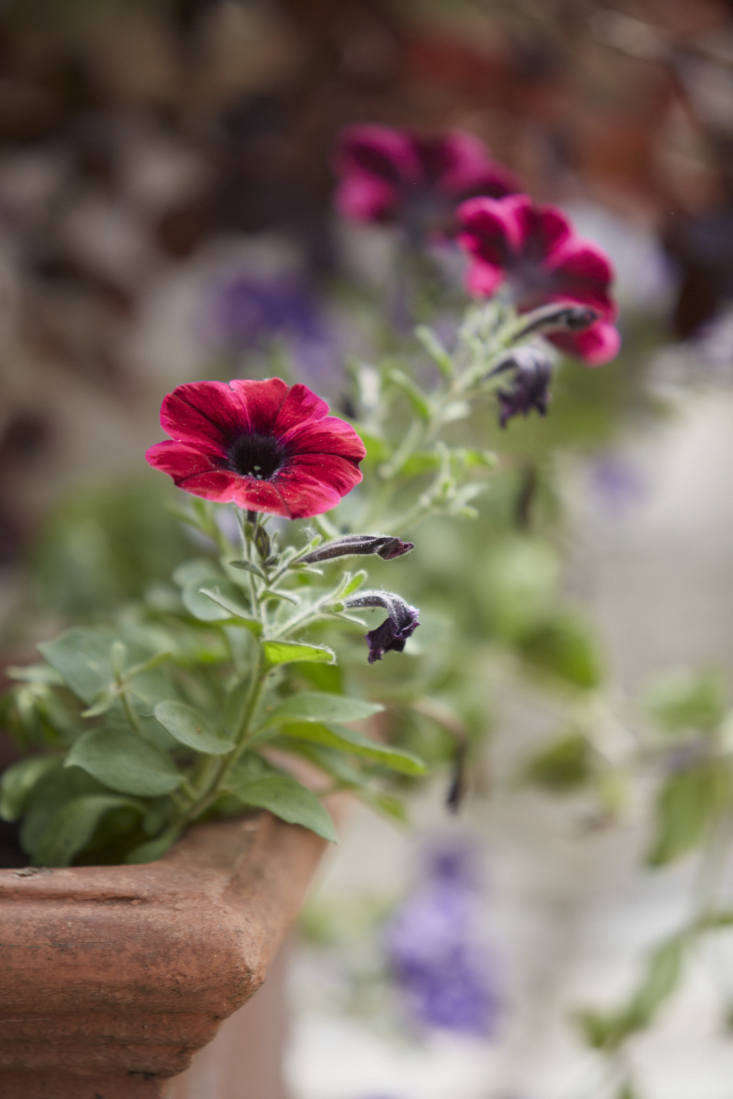 A discussion about petunias would be incomplete without mentioning one of its relatives that is rapidly giving the petunia a run for its money as a popular container plant. Calibrachoa is a native of Brazil and migrated here in the late 1980s and early 1990s after Japanese hybridizers made some improvements that made it easier to grow.

Ellen Reznick of Lush Life Gardening, who uses many annuals in her work beautifying New York City terraces and balconies, told me she avoids petunias in favor of calibrachoa because it flowers more generously and is impervious to some of the cultivation problems of petunias (including mildew and susceptibility to weather damage). The good news is that gardeners have an ever widening array of choices of beautiful plants. The bad news is…so many decisions.

How to Arrange Flowers Like a Frenchwoman: 8 Chic Techniques

Your First Garden: How to Start a Garden for Practically Free