In the early 1980s Juan Montoya, an interior designer based in New York, had tired of Manhattan’s concrete jungle and the disconnect he felt from the subtleties of the seasons. So he went looking for a refuge outside the city. Having grown up in the countryside in Bogota, Columbia he was yearning to reconnect with nature. After falling for places out of his budget, Montoya asked his realtor to show him a property that was considered less desirable. The 110-acre property was located in Garrison, NY, a hamlet an hour north of Manhattan on the eastern shores of the Hudson River, with hilly, rocky, woodland terrain, a charming train station, but no real town.

When Montoya saw the majestic property and dilapidated house in Garrison, it was love at first sight. He called it La Formentera after the small Spanish island where he lived for a year in the 1970s, and has spent the next 30 years crafting an idyllic woodland retreat in the lower Hudson Valley. 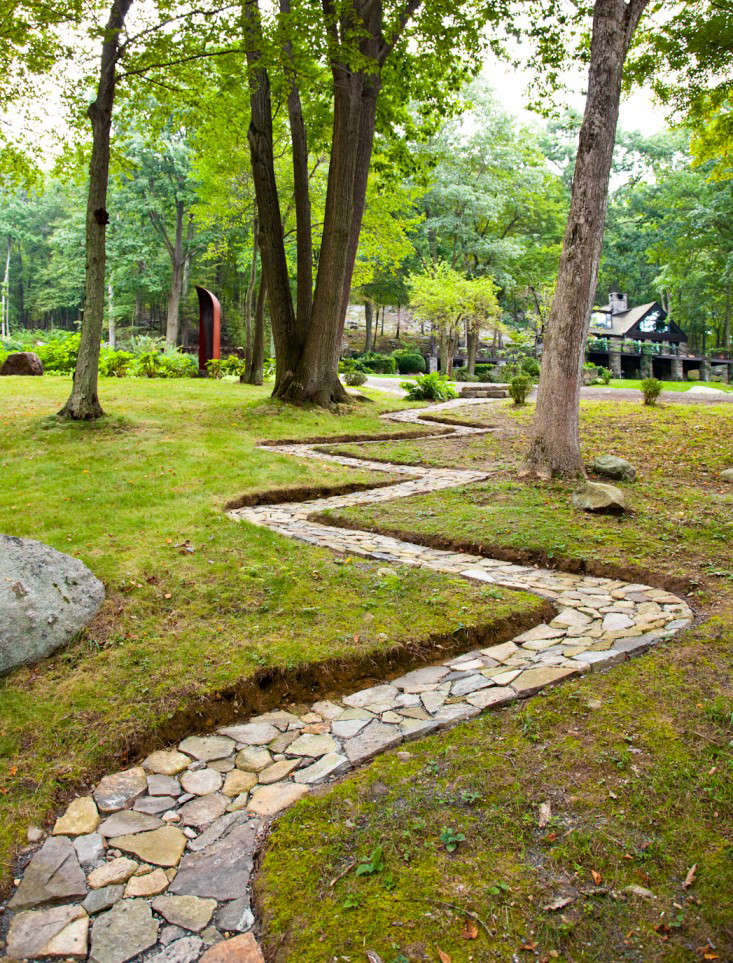 Above: A beautifully designed serpentine path, made from the local granite, leads to Montoya’s rebuilt house.

All that’s really left of the original house is where it sits on the land. Montoya was impressed with the way it was situated in the woods, every room taking advantage of the light and views. And for two years he studied the land and trees before even considering making a change to the property. 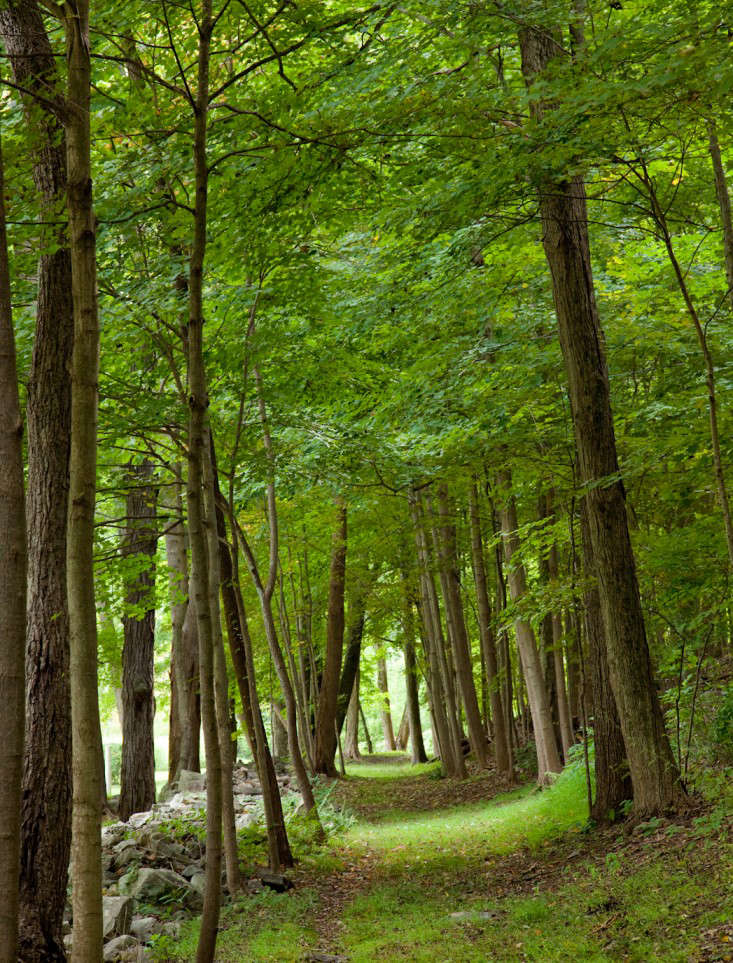 Above: A delightful natural trail alongside the pond looks like it was always there. The property is filled with oak, white birch, and chestnut trees to name only a few of the species on the property–a combination of old-growth and recently planted specimens.

Montoya wasn’t interested in imposing a garden on the property that didn’t relate to its intrinsic qualities. With respect to the land, he slowly began the process of carving out spaces in the woodland; adding stone walls and paths to guide the eye and carefully placing sculpture to act as focal points. Much effort goes into the care of the trees–pruning, adding, and taking away. Montoya looks at the land much as he does his work, as an artist. His love of green is evident in the texturing and patterning he’s created using plants of different hues. The only flowers allowed on the property are white so as not to detract from all of the brilliant greens.

A few years ago, as Montoya looked out over the property that he cares for, he decided it was time to document what was there. He invited photographer Eric Piasecki to capture it throughout the seasons. Together they created an impressive book with Monacelli Press, with a foreword by Karen Lehrman Bloch. The full-page color images allow readers to drift away into Montoya’s elegant verdant world. La Formentera: The Woodland Refuge of Juan Montoya is $65 from Monacelli Press. 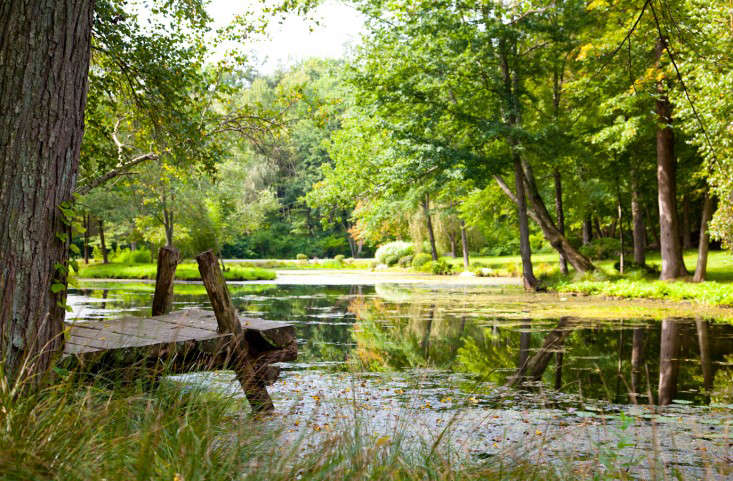 Above: A 3-acre pond with an island, that Montoya created by damming the brook on his property, is more like a lake and is the central feature of the landscape. 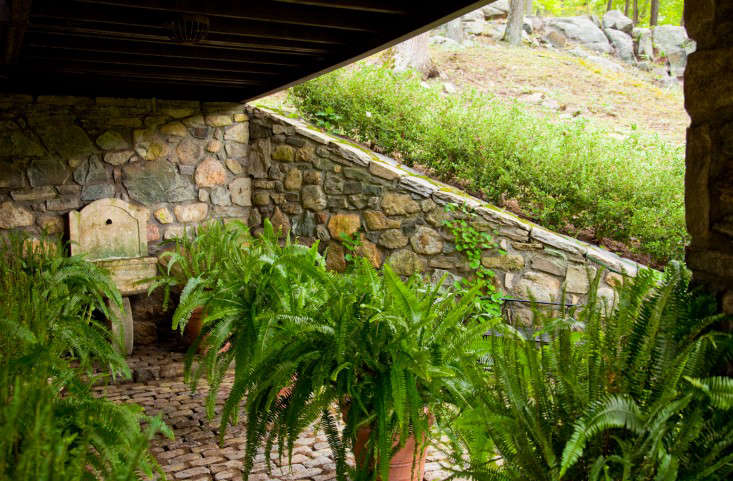 Above: Oversized terra cotta pots with ferns in the lower level courtyard, is a simple, elegant gesture that adds layers but doesn’t detract from the overall experience. 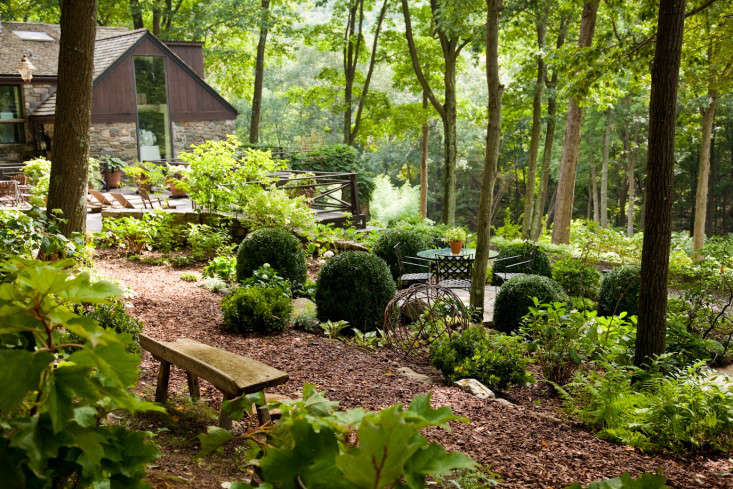 Above: Montoya likes the sculptural quality of boxwood and its deep green hue. It could look out of place–too formal in this type of landscape–but he has dotted large areas in a seemingly random pattern that adds visual interest and a resting spot for the eye. 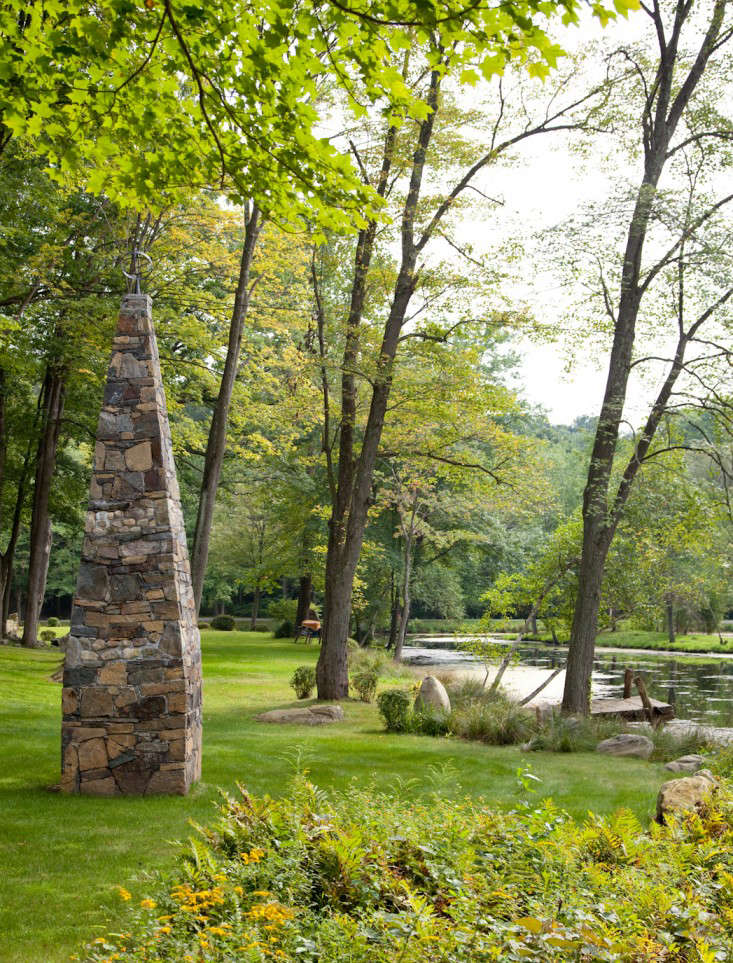 Above: A monolith sculpture made of local stone acts as a focal point on the east side of the pond. 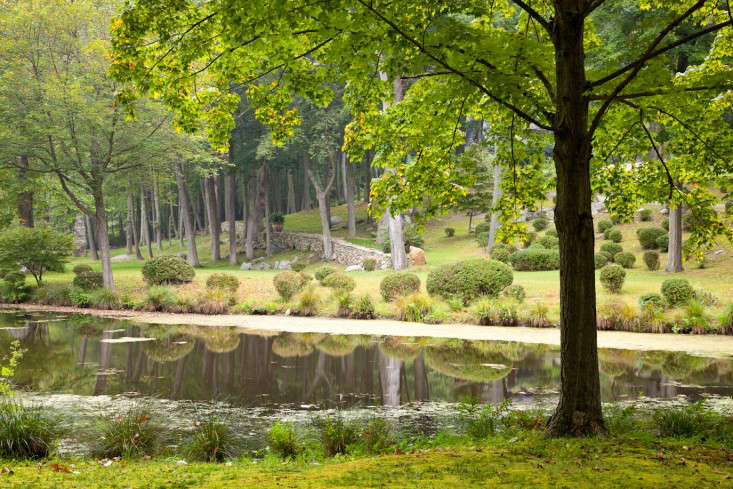 Above: A view across the pond to the boxwood hillside. 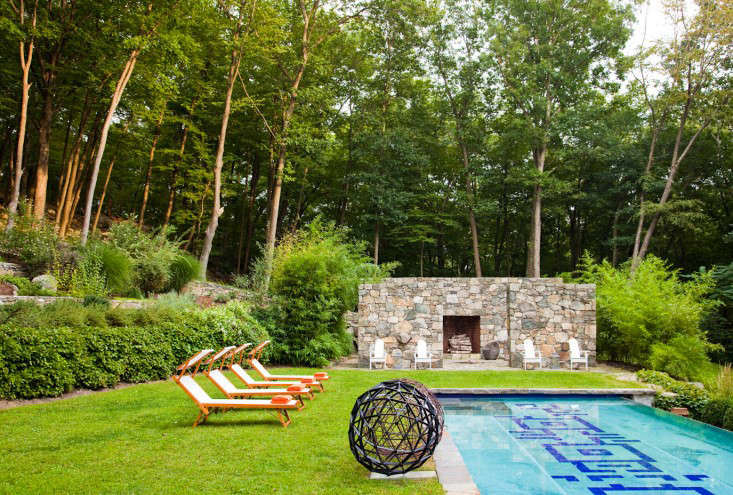 Above: After years of swimming in the pond with the snapping turtles and trout, Montoya added the pool. Its floor has a geometric pattern inspired from a royal palace in Stockholm. The oversized outdoor fireplace is a mortar-free structure built of local stone.

Or get lost in our Architects’ Roundup: 10 Emerald Green Gardens.

Fancy yourself a city slicker? See Landscape Architect Visit: A Living Wall in London for an urban oasis.