Visitors to Babylonstoren, the opulently restored Cape Dutch farm and hotel 45 minutes from Cape Town, are encouraged to pick fruits and vegetables directly from the renowned kitchen gardens.

The farm’s website tells you what is in season. In late January (South Africa’s summer) it reads: “Baby marrows, beans, onions, garlic, parsnips and basil are lush and ready for harvest. Get lost in the stone fruit block to enjoy juicy plums, nectarine and peaches.” In this garden, you may pick what you see. 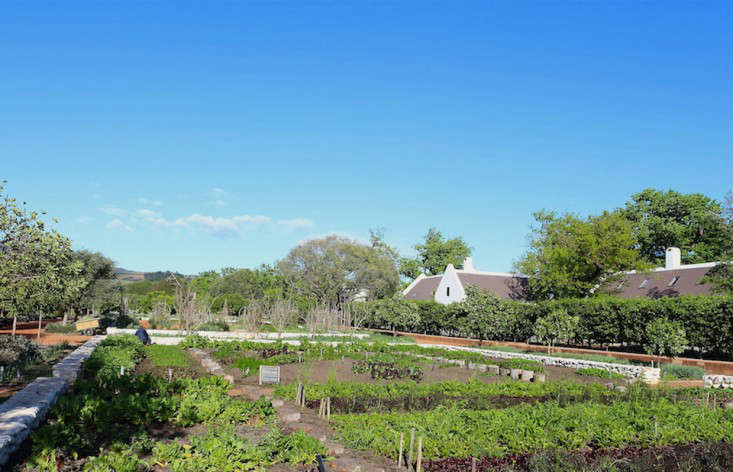 Above: The parterred edible playground, designed by French landscape architect Patrice Taravella, is the sort that fulfills horticultural cooks’ fantasies. The wild kind. 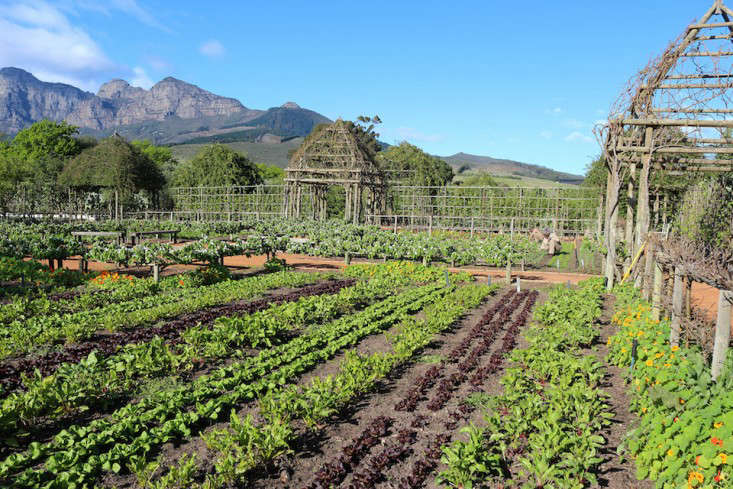 Above: Inspired by the Company Gardens established at the Cape by the Dutch East India Company in the 17th century (to replenish scurvy-plagued ships en route to the East Indies), the eight-acre gardens support an intoxicating collection of plants supplying the farm’s restaurants, guest suites, and gift shop. 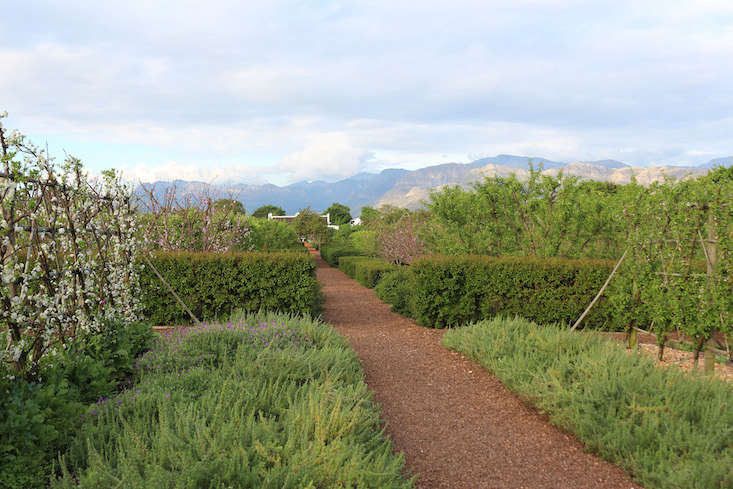 Above: While familiar edibles are plentiful, a timely improvement on the colonial gardens is the inclusion of diverse native South African plants such as wild rosemary (Eriocephalus africanus), flanking the path above. 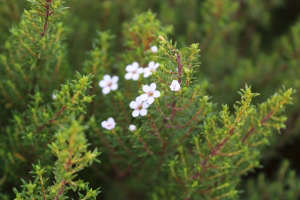 Above: The needles of confetti bush (Coleonema species) are highly aromatic, pairing well with seafood and citrus or quince cordials. 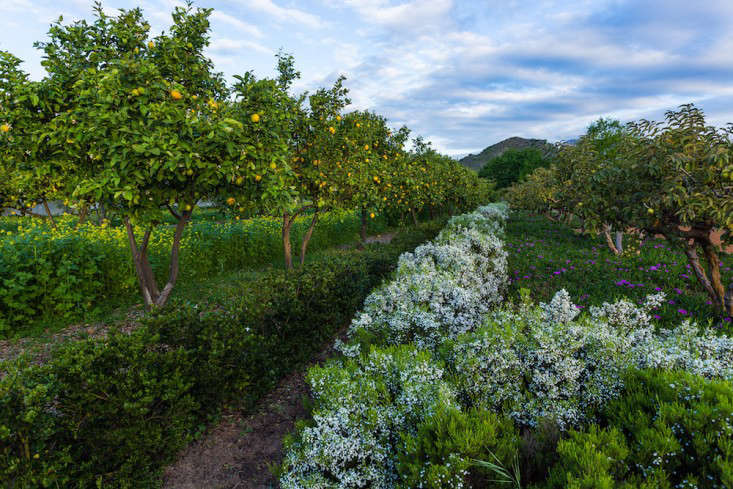 Above: Confetti bush as hedge. Photograph by Vincent Mounier. 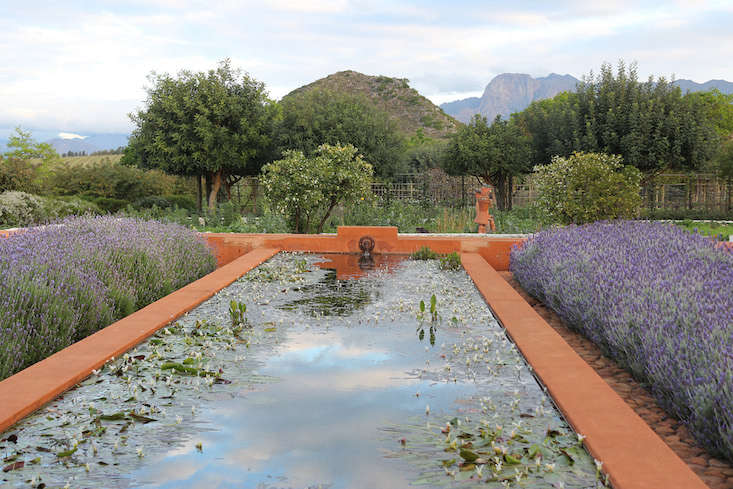 Above: Waterblommetjies (Aponogeton distachyos) are a traditional ingredient in lamb stews called bredies, and are delicious raw, as pickles, or in side dishes. 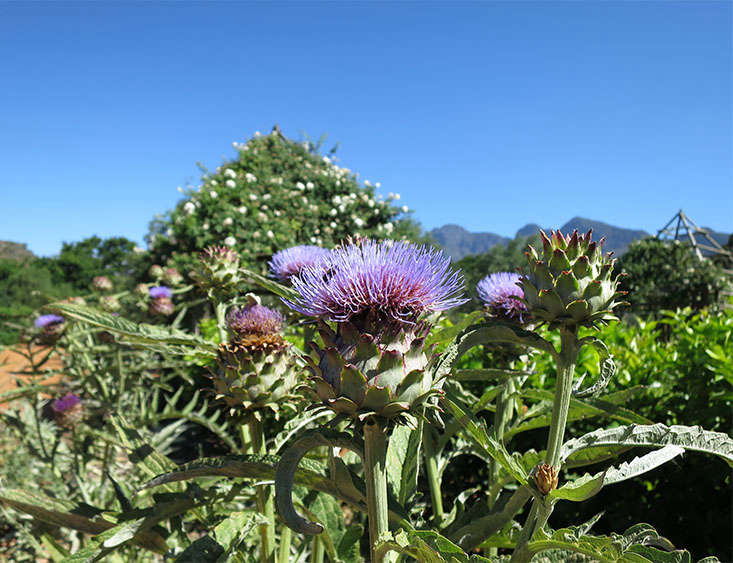 Above: While vegetables are here to be eaten, their ornamental appeal is not lost, and seeds are saved; artichokes are allowed to flower. 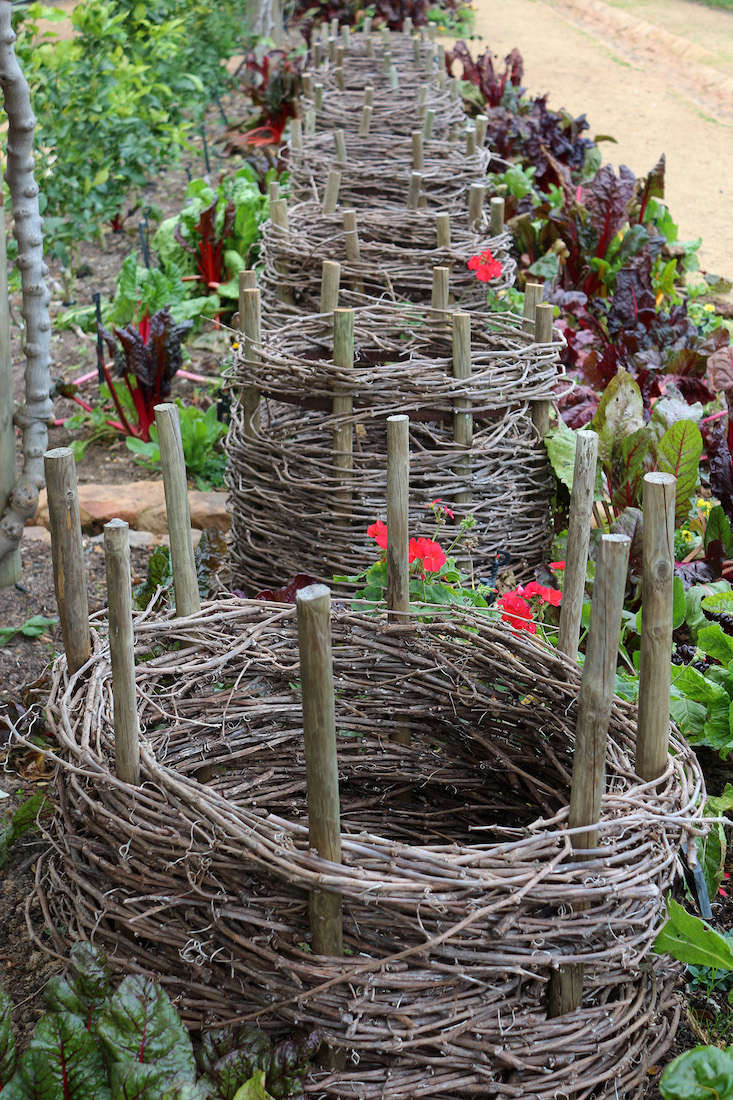 The gardens are a source of practical inspiration, where functional objects are beautiful in their own right, such as these woven baskets which blanch the stems of rhubarb. 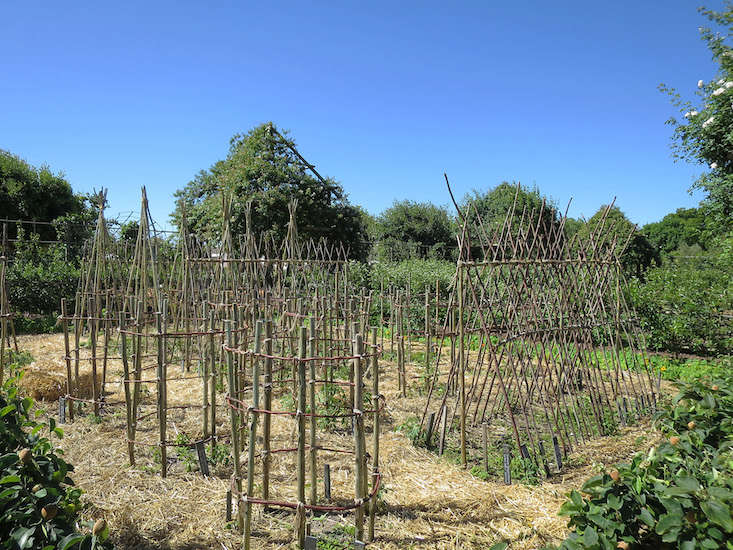 Above: Stick-art takes tomato teepees to a new level, while straw mulch preserves moisture from the intense southern African sun. 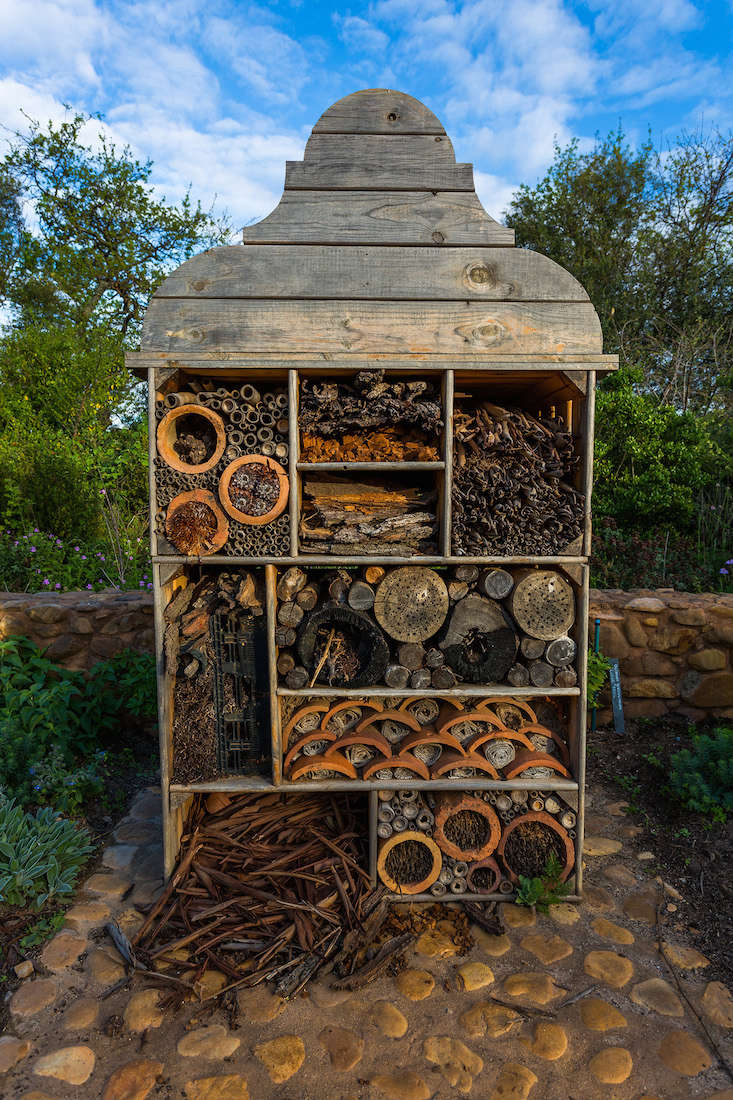 Above: by Vincent Mounier.

Organic principles are adhered to as much as possible, and the bug hotel provides stylish accommodation for beneficial insects (a pile of brush in your garden will do the same thing). 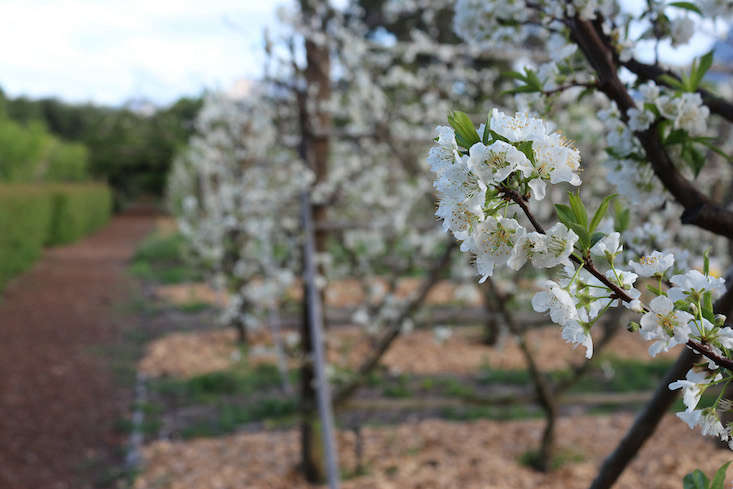 Above: Pruning and espalier workshops are led by head gardener Liesl van der Walt and master fruitman, Anton Roux, who has spent his life pursuing the art and craft of fruit growing – the extensive orchards are under his care. 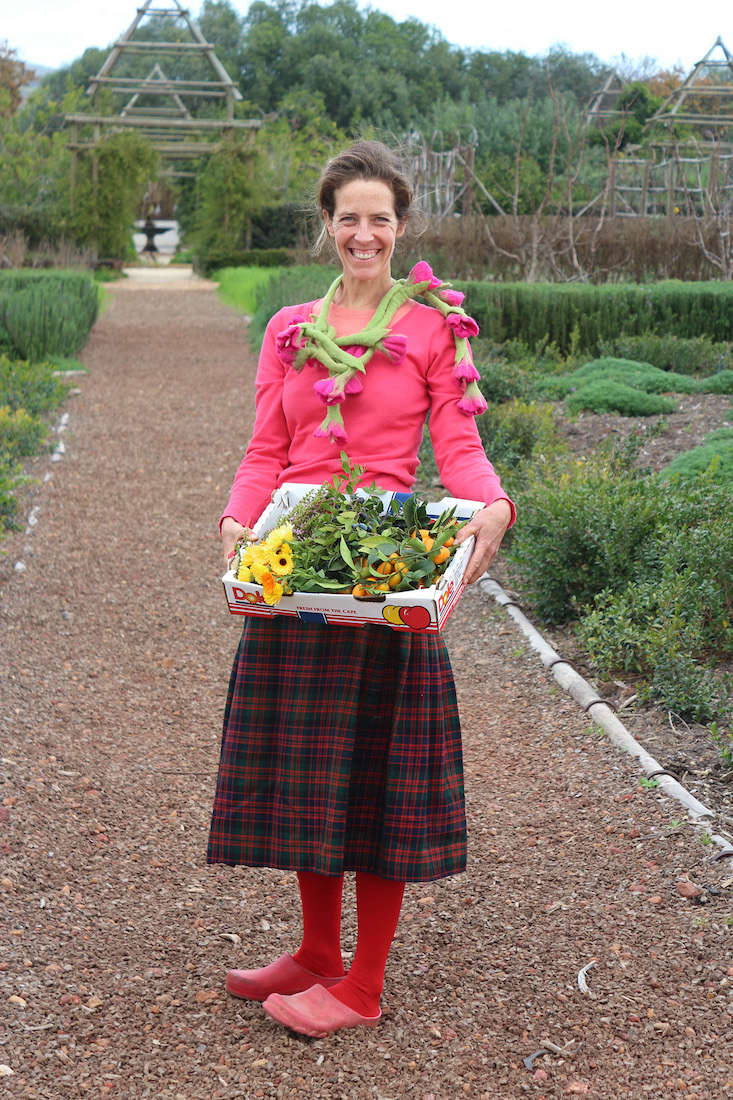 A Volunteer Program encourages local and visiting botanists and gardeners to share in the upkeep of the gardens, in order to learn the sustainable techniques employed here and to contribute a fresh perspective. 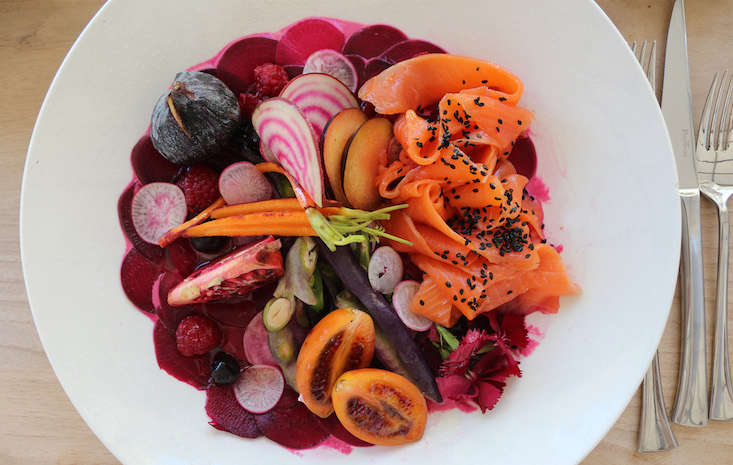 Above: For day visitors on a budget, the gardens offer a cheap but rich botanical tonic. A modest R10 fee at the gate is donated to a farm trust to support local schools, and then the grounds are yours to explore. But two restaurants—upscale and casual—are hard to ignore; they serve meals where pristine produce is piled on your plate.

The day’s fruit and vegetables arrive color-coded, and the effect is arresting (and can be learned from the Babylonstoren cookbook, Babel Cookbook). 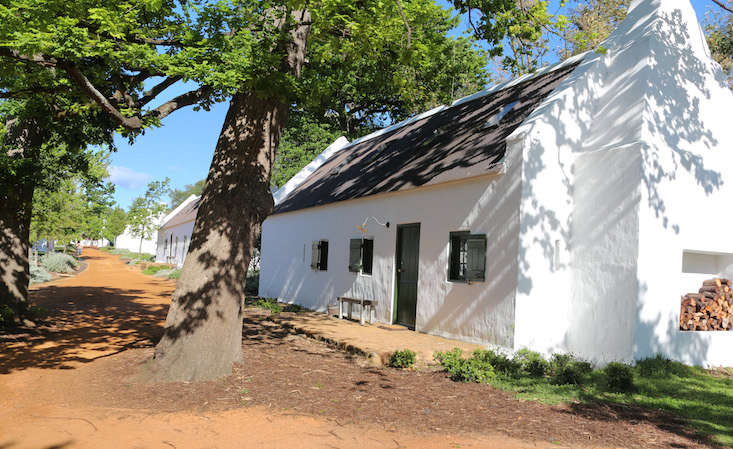 Above: For an immersive experience, the artfully renovated farm cottages in an avenue of oak trees provide sumptuous accommodation. When my husband and I were invited to be overnight guests, I leaped at the chance. I have visited Babylonstoren on day trips since it opened to the public in 2011, but now, on our way back to Cape Town after a long and dusty trek to see the spectacular spring flowers up South Africa’s West Coast, this stop promised a luxurious treat before we went home. 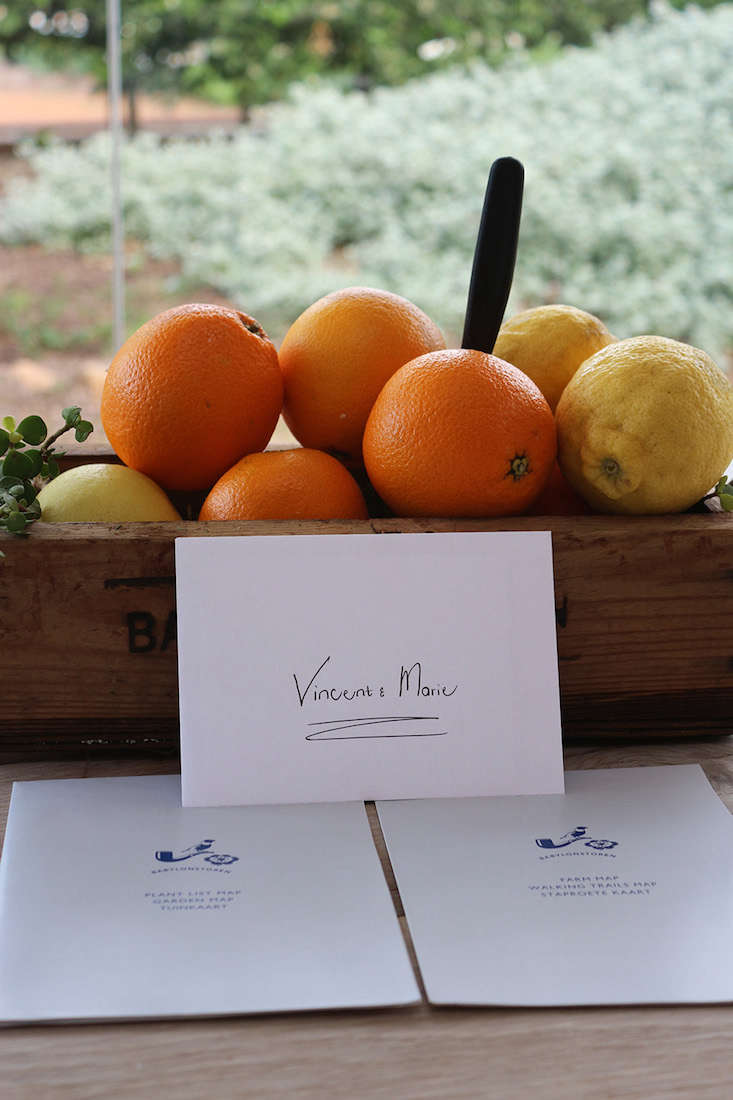 Above: The lemon and orange trees were in blossom, and in our cottage a box of the fresh citrus greeted us. We had just opened a complimentary bottle of Babylonstoren Viognier when a friendly waiter tapped at the door to offer a plate of canapés featuring local smoked trout and fresh herbs. A pinecone fire crackled in our hearth; there seemed no reason to venture out. But a supper of wood-fired pizza topped with garden leaves and charcuterie waited for us in the farm bakery, transformed for the night into a rustic restaurant for hotel guests. 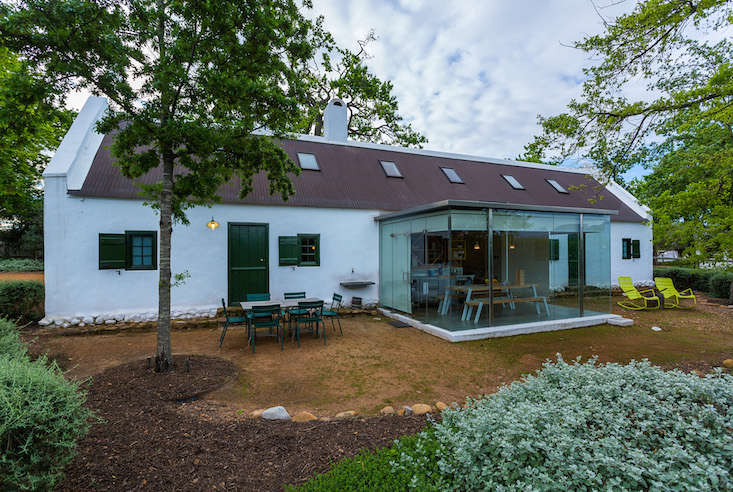 The sense of generosity that characterizes Babylonstoren could be attributed to the fact that Koos Bekker, a South African media billionaire for whom money may no longer be an object, is the husband of Karen Roos, the farm’s owner. Roos is a former editor of South Africa’s Elle Decoration. Her sense of sophistication and style influence everything from the minutiae of herbed posies in the public bathrooms to the scope of the light-infused guest cottages, where pieces by Philippe Starck, Magis, and Kartell share the airy space. Libraries curated by Bekker and Roos fill the bookshelves. 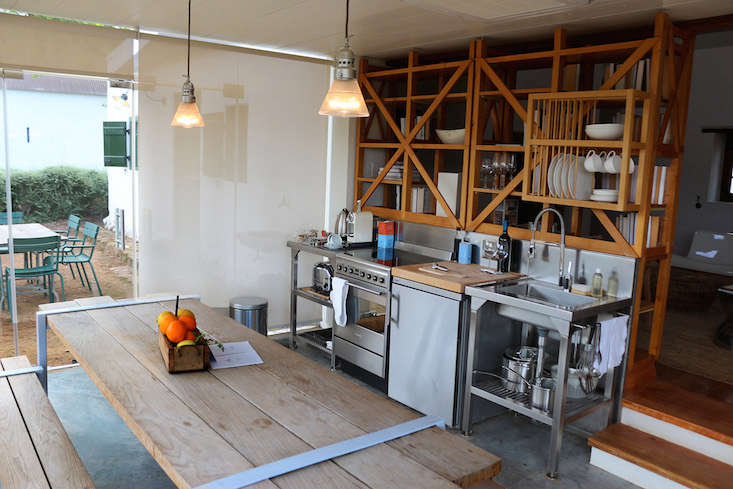 Above: Our dreamy kitchen—a glass cube extending from the thick walls of the historic building—was stocked with Babylonstoren’s olive oil, wines, and teas. But the real temptation to cook called through the glass walls: the whole kitchen garden is at your disposal. Pick your salads, lemons, and fresh peas, and pull carrots in the quiet that envelops the vast grounds after the day visitors have left. 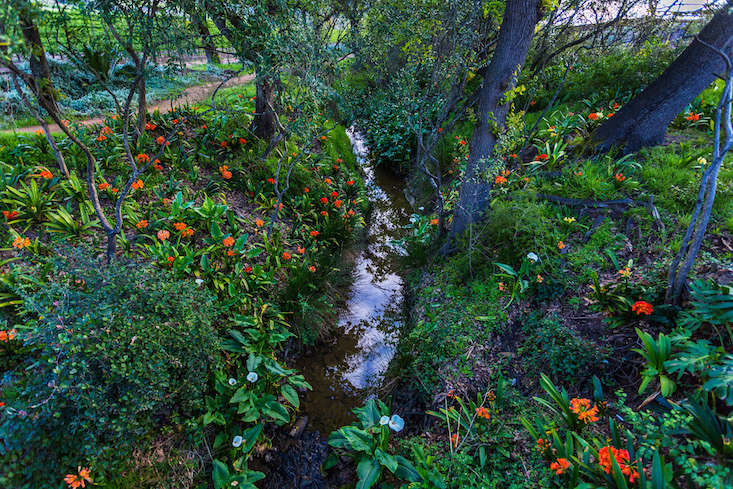 Before dinner, a walk around the farm in the early evening showed us the springtime clivias in bloom in the shade beside a mountain stream. If you venture farther afield on foot or mountain bike you will find rice paddies, vineyards, fruit orchards, and fynbos trails. 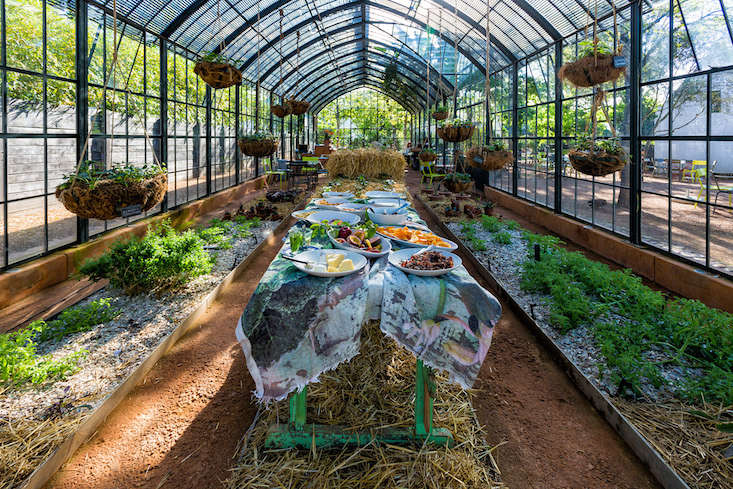 Farm breakfasts are served in the conservatory. If you wake early enough you may collect your own breakfast eggs from the patient garden hens. 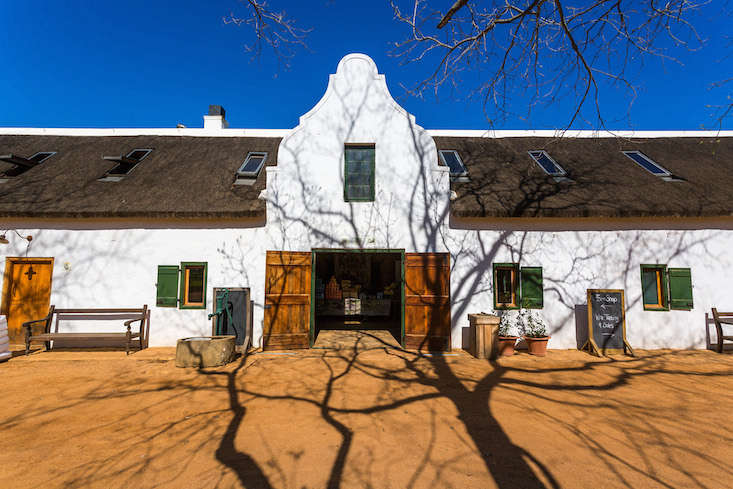 A stop at the farm shop is highly recommended. Inside you will find that wood-fired bakery and its fresh bread, the cool, tiled cheese room, and local charcuterie. Wine tastings are just next door. 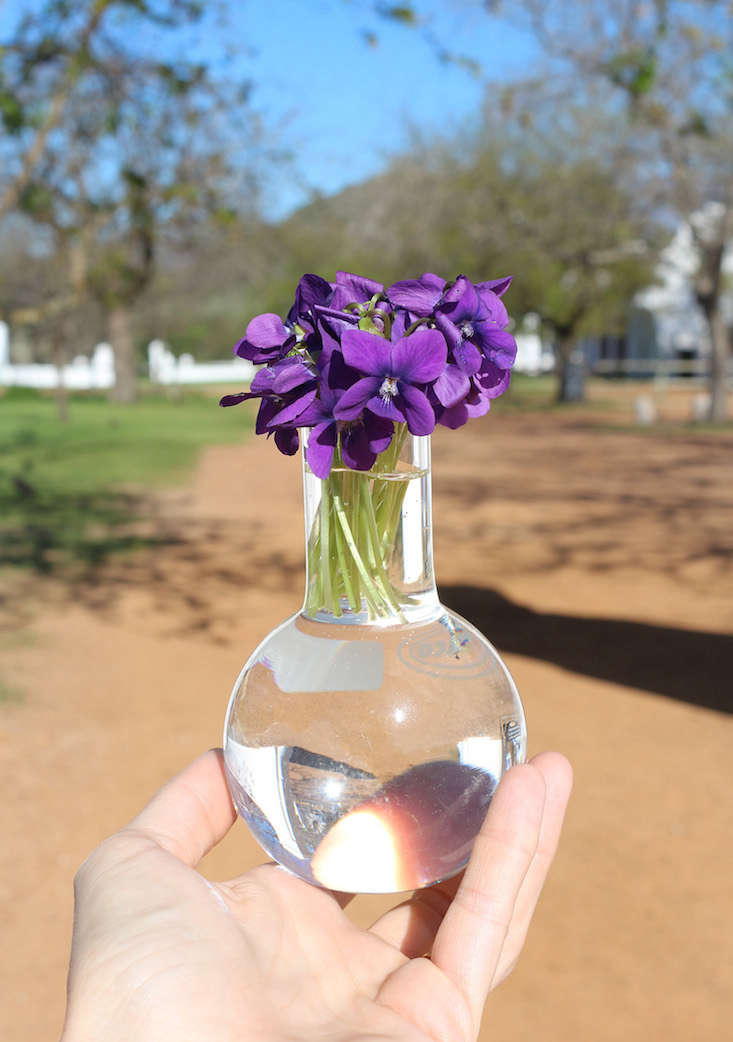 Above: Fresh-picked farm flowers, soaps scented with waterblommetjies and citrus blossom, and fruit and herb preserves and cordials, and local honey are hard to pass up and make shopping for gifts a pleasure.

Babylonstoren is a garden destination where the appeal keeps growing. Literally.