Only a handful of gardens around the globe are real must-visits for garden lovers. Ayrlies, on a large country estate near Whitford, southeast of Auckland on New Zealand’s North Island, is one.

This masterpiece was begun more than 50 years ago by Beverley and Malcolm McConnell. As a young couple, they purchased a large rolling pastoral terrain, meant for cattle, to start their family. They were amateur gardeners with big ideas. They began by turning three acres into a garden, and over the years it grew to 12 acres of heavily planted informal gardens, with several ponds and water features.

Beverley has the eye, and a natural sense of color, texture, and combinations. Her late husband, Malcolm, who headed up a large engineering and construction company, was keenly interested in water. And several years in they hired Oliver Briers, knowing it would take more than just the two of them to realize their dreams. Working by Bev’s side, he helped bring a sense of design to the property, now a lush garden of Eden.

Beverley has been called the Vita Sackville-West of our day, working with a sub-tropical palette of exotics and native plants. Building a garden like this takes a lifetime, and to have a soul it needs an artist at the helm. Now in her 80s, she is still a vital force. If creating the ornamental garden wasn’t enough, in 2000 she embarked on a 35-acre wetlands project to restore five acres of swampland that connects the garden to the Hauraki Gulf.

Above: The ponds and water features at Ayrlies were all created by Malcolm McConnell, who was fascinated by the effects of water in a garden. Here, tree ferns and aquatic plants create a lush scene, somehow making the pond look as if it’s been there forever. 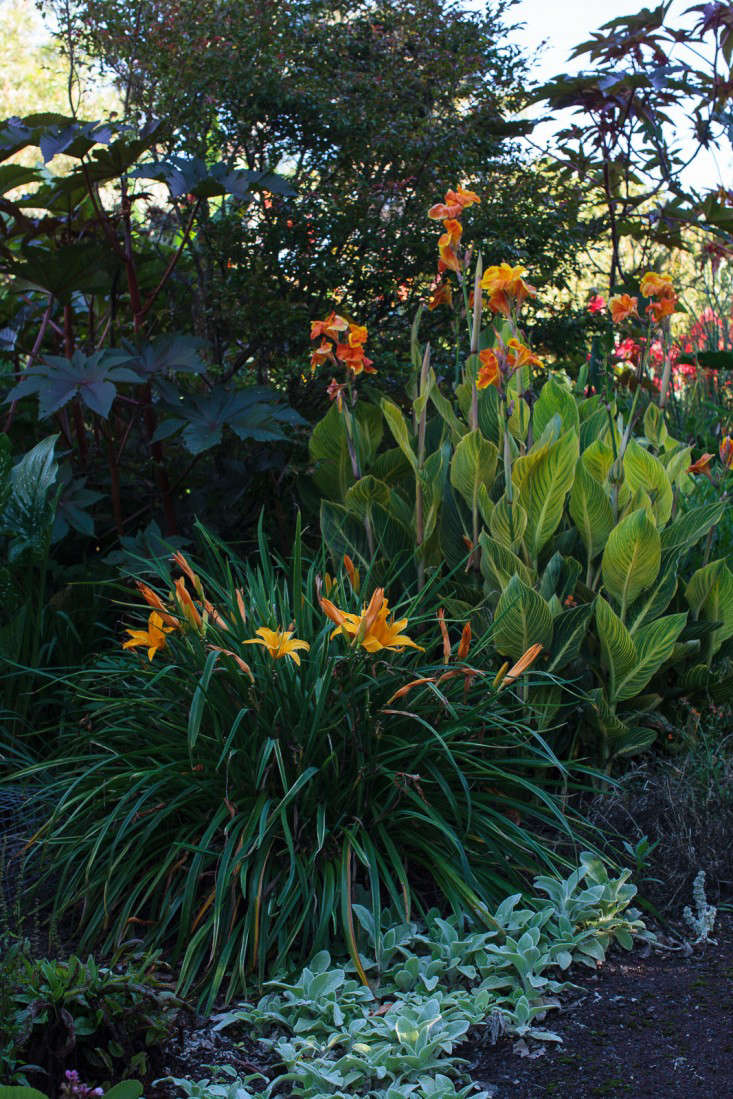 Above: Many areas of the garden are delineated by theme, plant selection, and color. In the Lurid Border, Beverley plays with hot Gauguin-like colors: orange day lilies ‘Flaming Nora’, black-leafed castor bean, and variegated canna with striking orange blooms, underplanted with silver stachys, or lamb’s ear.

To train her eye, Beverley visited important gardens in England over the years. In turn, her own garden began to draw attention. The late Christopher Lloyd, of Great Dixter in England, was a regular visitor to Ayrlies, and it is a favorite of Dan Hinkley, one of America’s great plantsmen. 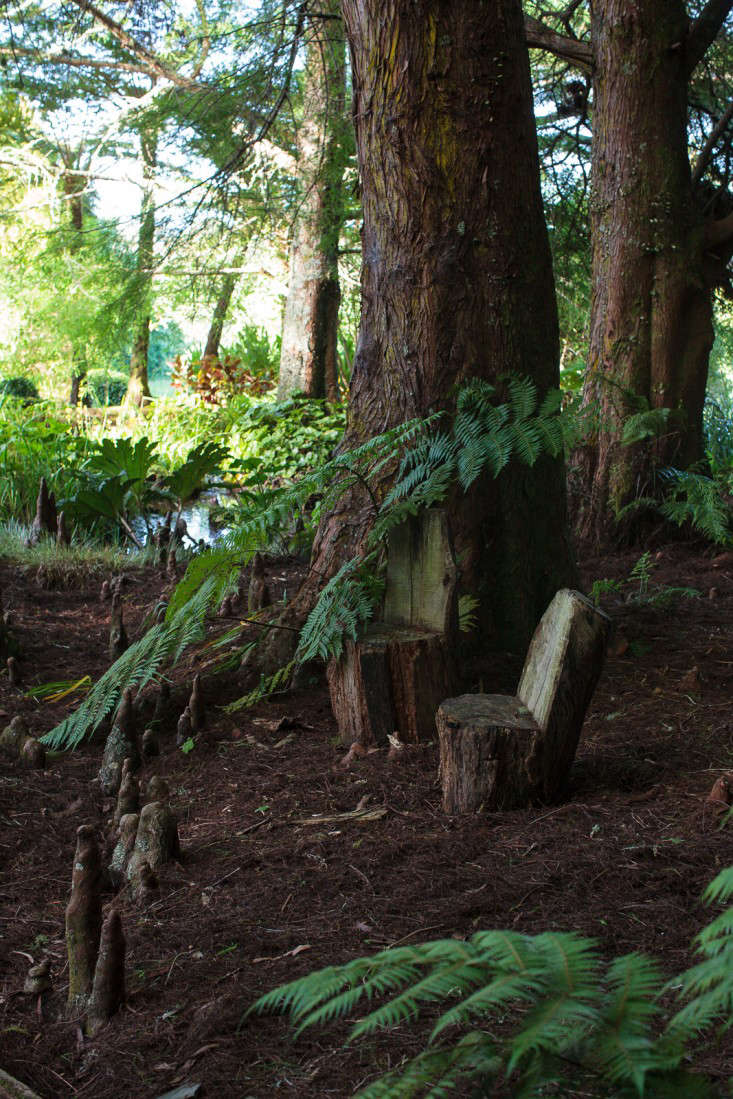 Above: Wooded areas like the Rockery offer a respite from the garden’s densely planted areas.

Beverley McConnell has written a very personal and beautiful book on the making of the garden, with “before” pictures that show how vision and determination can transform a property. You can order a copy of Ayrlies for $96.28, which includes postage to North America. 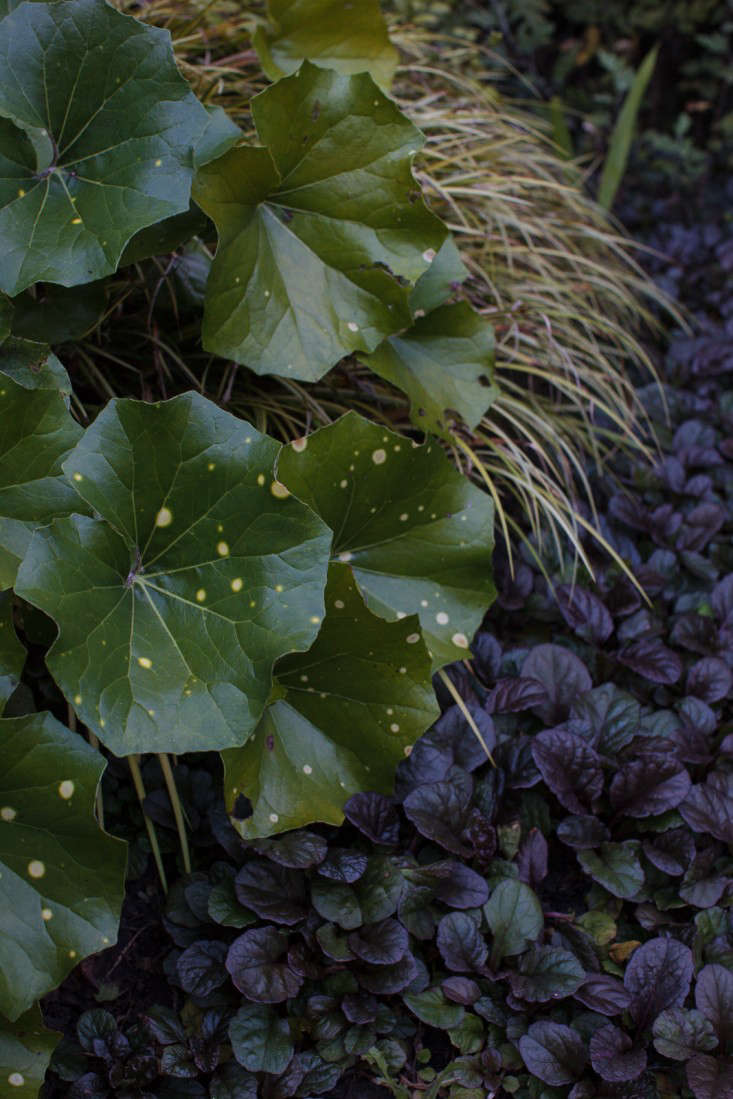 Above: There is much to be learned from Beverley’s color palette and sense of texture. This detail–showing burgundy-colored ajuga, spotted farfugium, and a brownish ornamental grass–shows how leaf shape, color, and form can create as much impact as flowers, and persist longer. 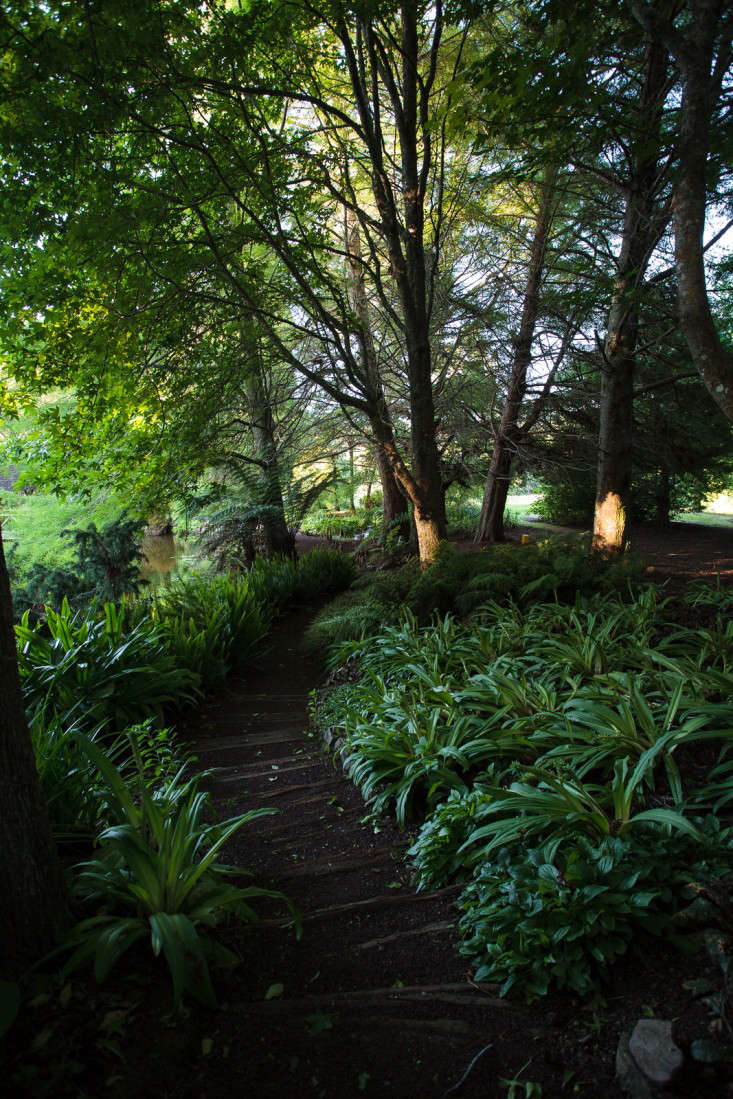 Above: Oliver Briers, who worked alongside Beverley, was a master at linking the various garden rooms with meandering paths that flow from one area to the next. Here, rustic steps lined with bromeliads pass through a shady area. 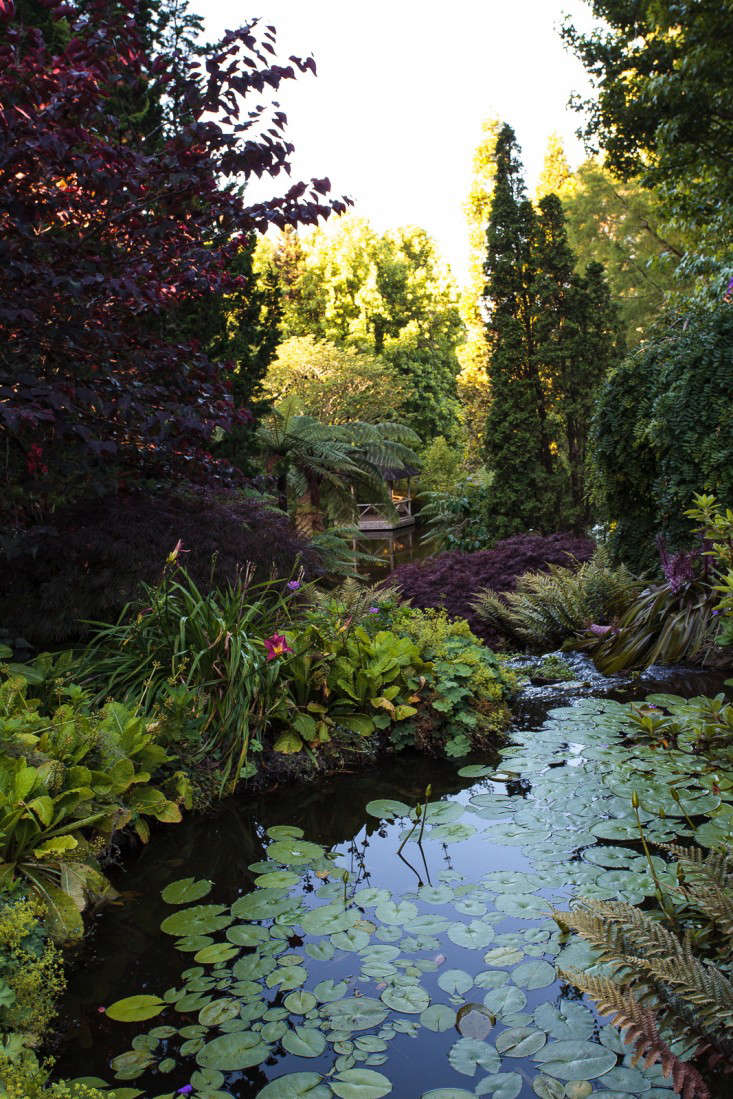 Above: The tall vertical Agathis robusta seen across the Cypress Pond anchor the lower garden. Beverley’s rich color sense weaves along the stream’s edges and helps to guide the eye. Deep purple foliage connects the garden; it appears to be a favorite color. 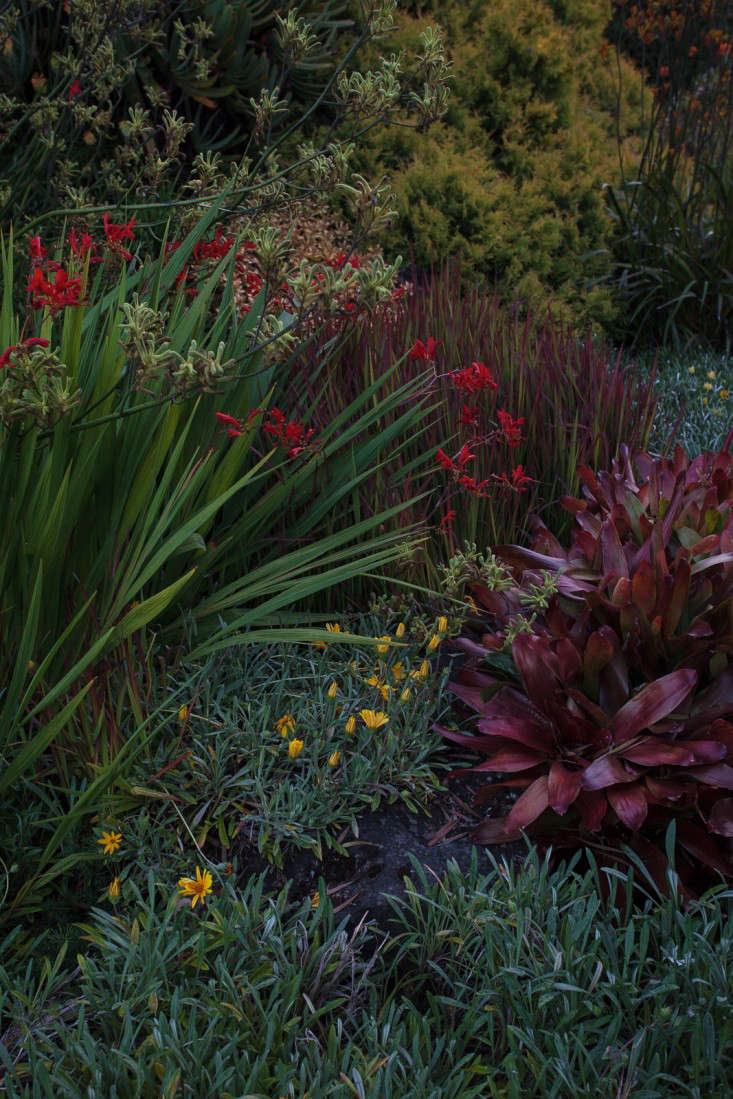 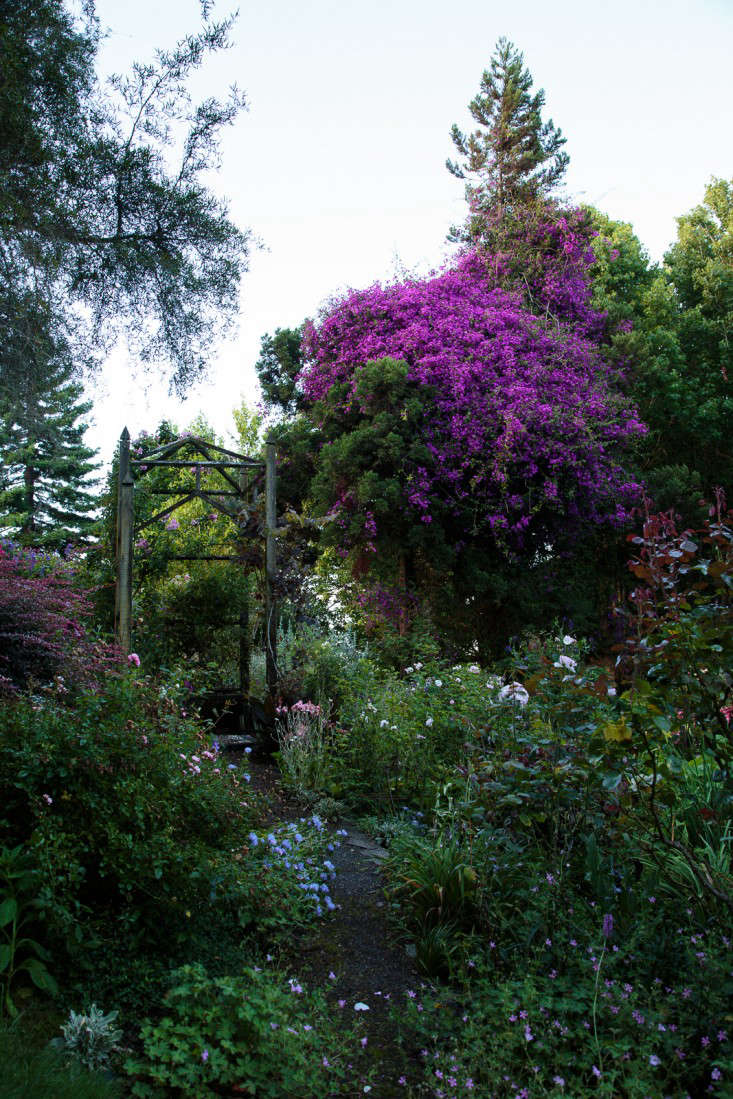 Above: An informal but more traditional part of the garden has a flowery moment. Beverley loves roses and has lots of them, scrambling up trees and weaving with clematis. But after they’ve peaked, bougainvillea ‘Magnifica Trailii’ steals the show. 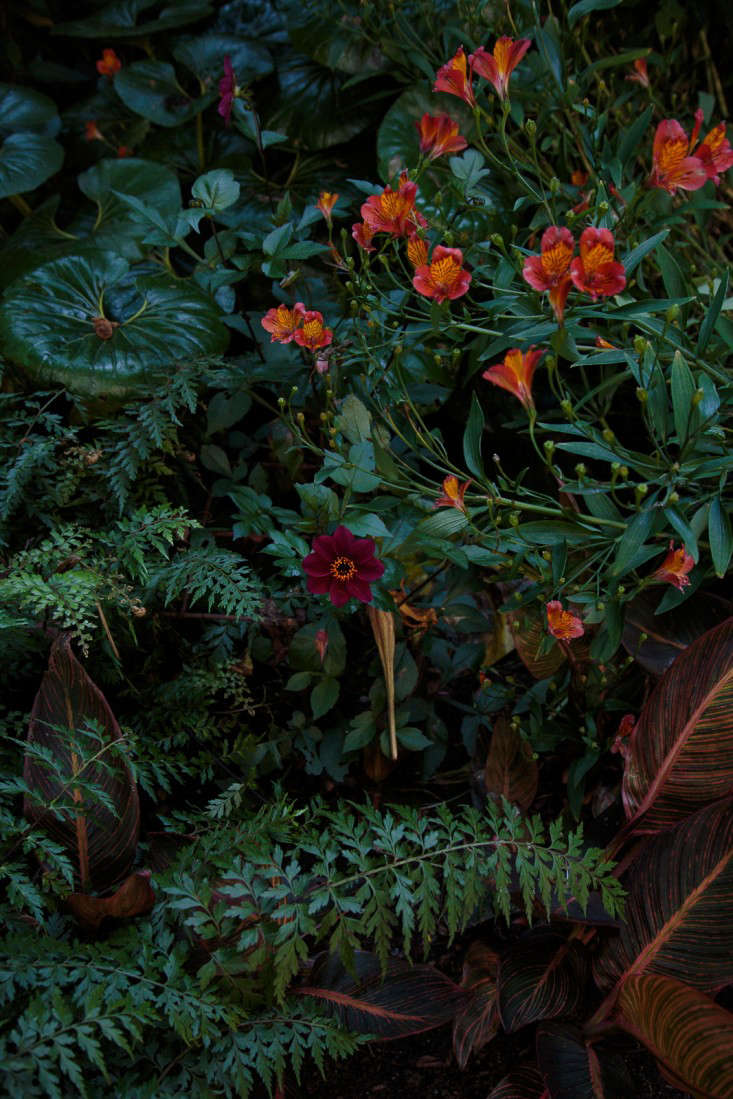 Above: Rich reds and greens complement each other in a mix of dahlias, glossy-leafed farfugium, ferns, variegated canna foliage, and alstroemeria. 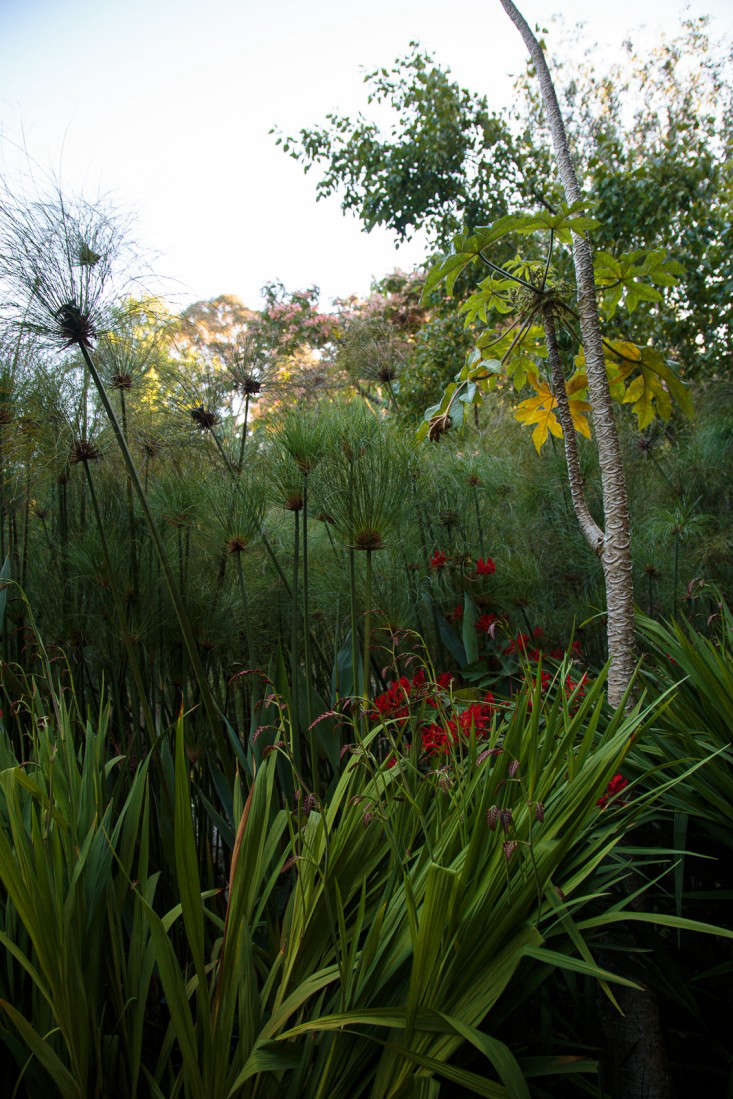 Above: Tall papyrus grows along the edges of the water features. 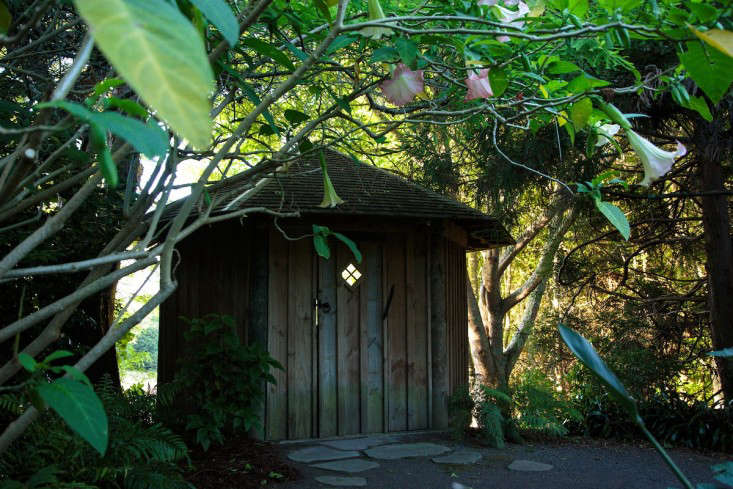 Above: A charming shed in the Rockery, shaded by mature brugmansia. 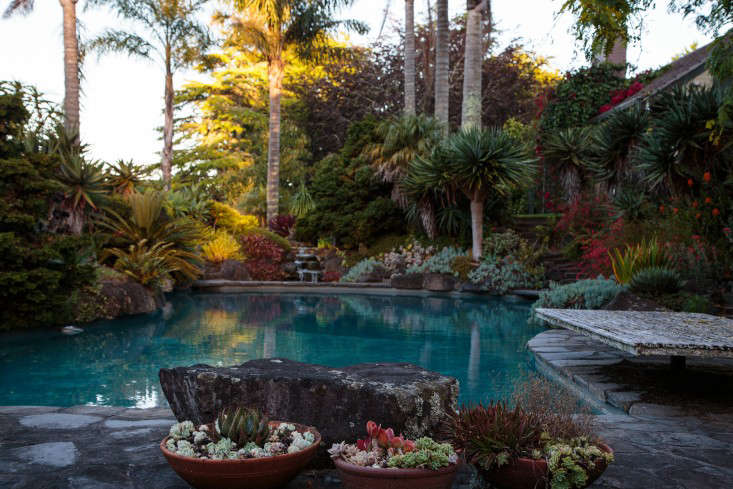 Above: The irregular-shaped swimming pool is surrounded by a verdant tropical garden, so it fits well into the landscape and connects the house to garden.

Ayrlies is now open to the public; for visitor information, see Ayrlies.

Read about other women devoted to their gardens in A Parisian Stylist in Provence, At Home With Canada’s Favorite Garden Writer, and Helen Dillon’s Garden in Dublin.

Ayrlies : My Story, My Garden