No groomed garden is this. In San Francisco, the California Academy of Sciences’ living rooftop is suffused with the beauty of the natural world. Planted strictly with natives, it feels almost like a wilderness, like a resting spot found during a hike on California’s coast. Generally, one’s view of the garden is limited to the observation deck, during the museum’s open hours. We were allowed to tread–as lightly as we could–between the hills, on a special tour.

Photographs by Liesa Johannssen for Gardenista. 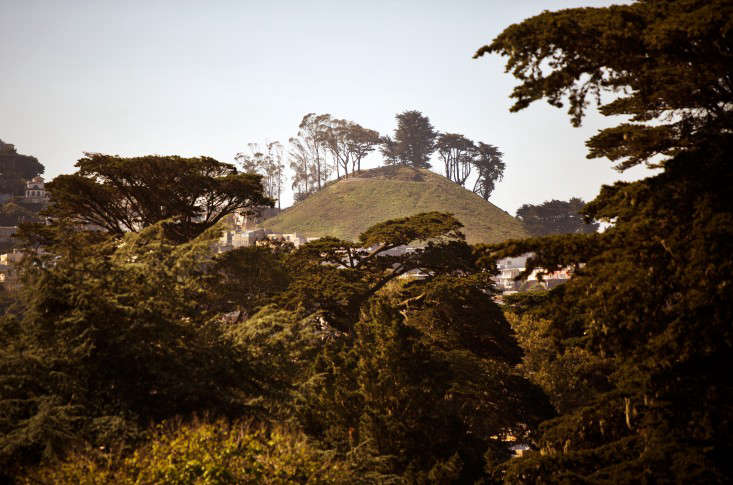 Above: The hill of Grandview Park, as seen from the garden deck, served as inspiration for the rooftop. Architect Renzo Piano, who designed the garden, wanted the space to blend seamlessly with the landscape, as if a piece of land had been lifted and the building with its technologically advanced solar panels and round windows inserted beneath it. 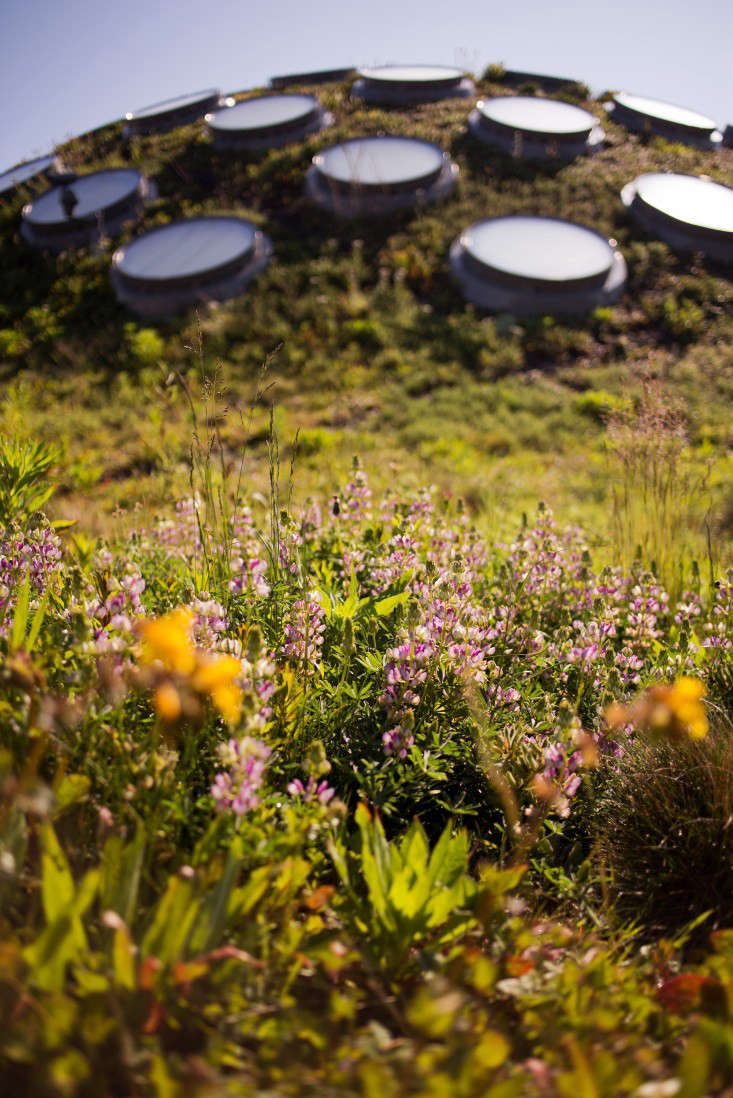 Above: The rooftop was originally planted with California natives that can take drought, foggy days, and wind. The hills trap cool air, and the windows open to ventilate and cool the building. The rooftop lowers the building temperatures by ten degrees. 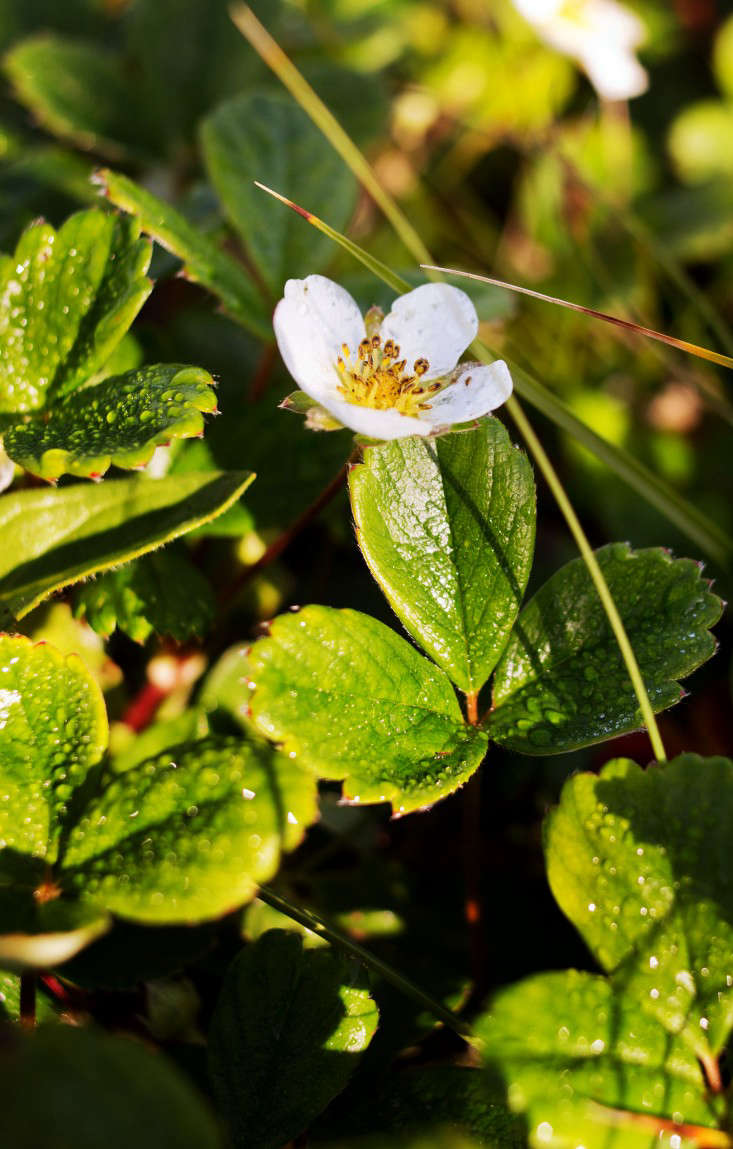 Above: The arrangement of plants is influenced more by wind, rain, and watering than meticulous pruning and plantings. In areas of the garden with the strongest wind, perennial low-lying wild strawberries (Fragraria chiloensis) do best. The fruit feeds the birds. 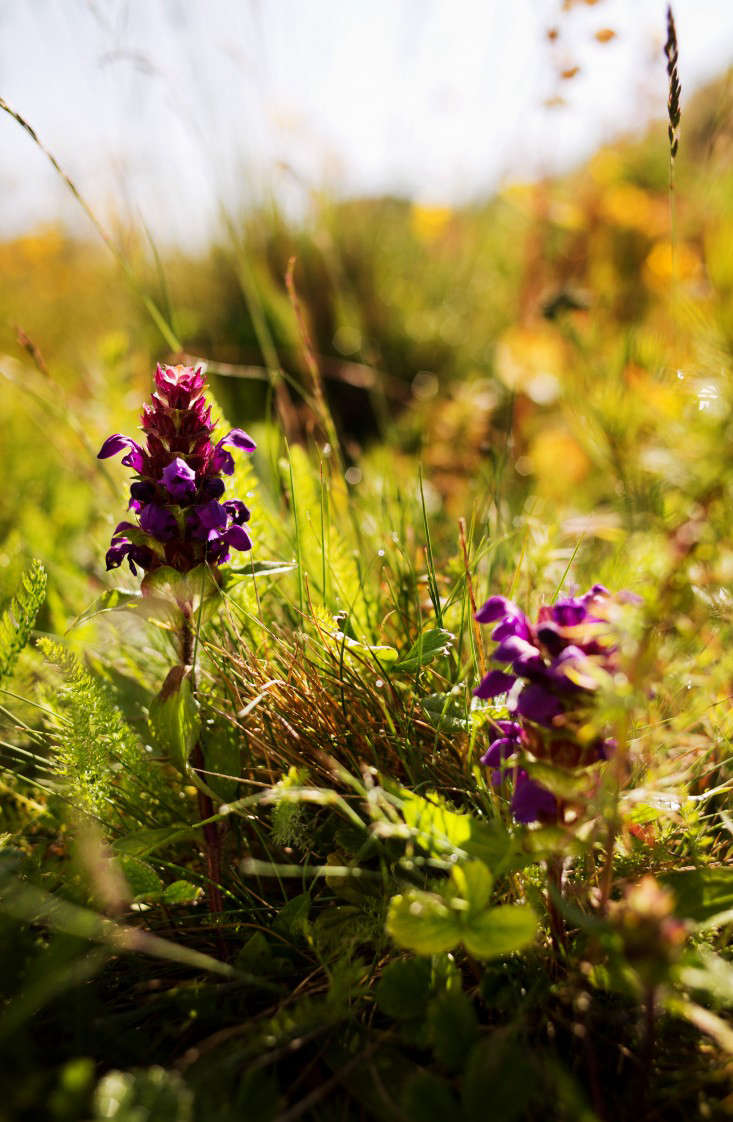 Above: Self-heal (Prunella vulgaris), amid a tangle of yarrow and strawberry, can dominate when the garden is abundantly watered and fed. Yarrow (Achillea millefolium) and strawberry are some of the best plants for rooftop gardens, and for drought-tolerant gardens in general. 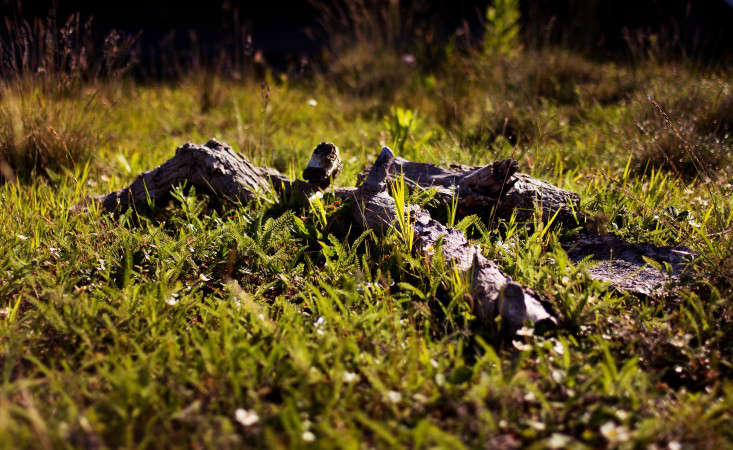 Above: Branches and logs are left purposefully for wood-nesting native bees. 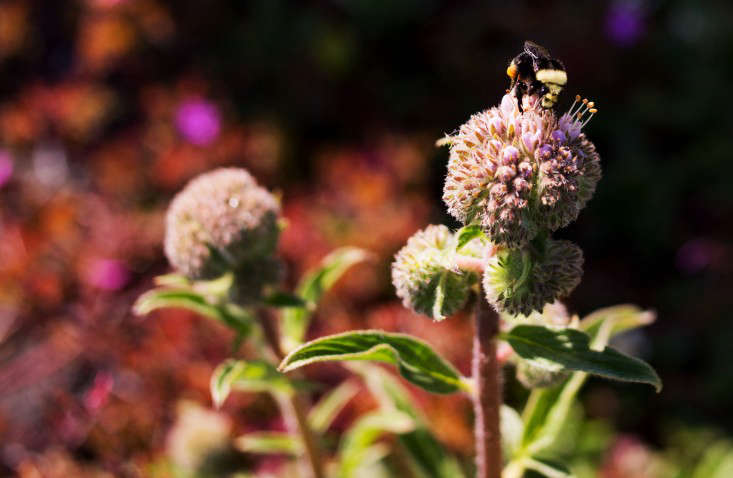 Above: A native bee perches on purple Phacelia, about to bloom. 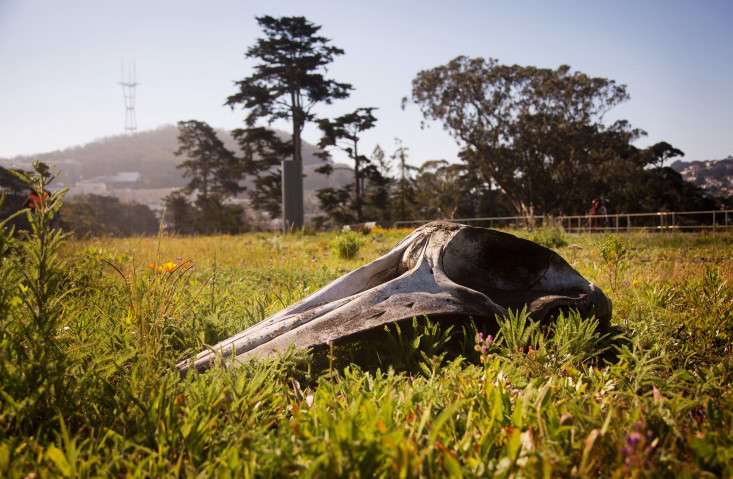 Above: A more bizarre sight is the bones of a beached whale, left to dry. The museum cleans and dries skulls for its collection on the roof. 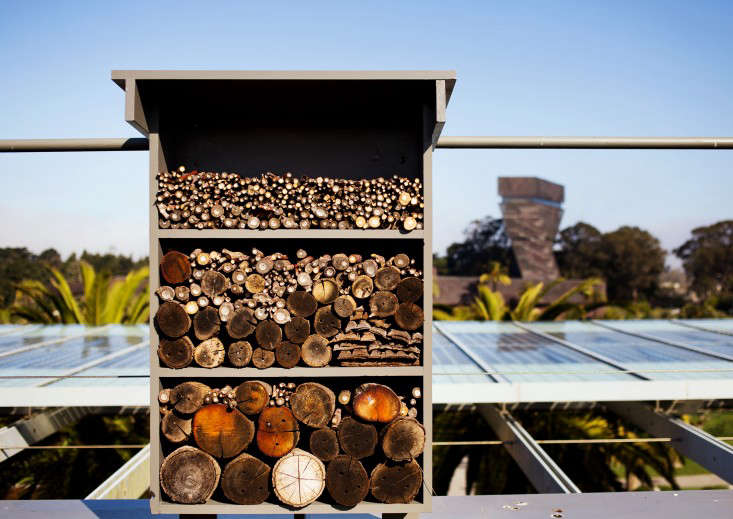 Above: Although 30 species of birds find food and water in the garden, pigeons don’t. The solar panels, such as the ones behind this bee house, are too hot for their feet, and they prefer pavement to grasses. 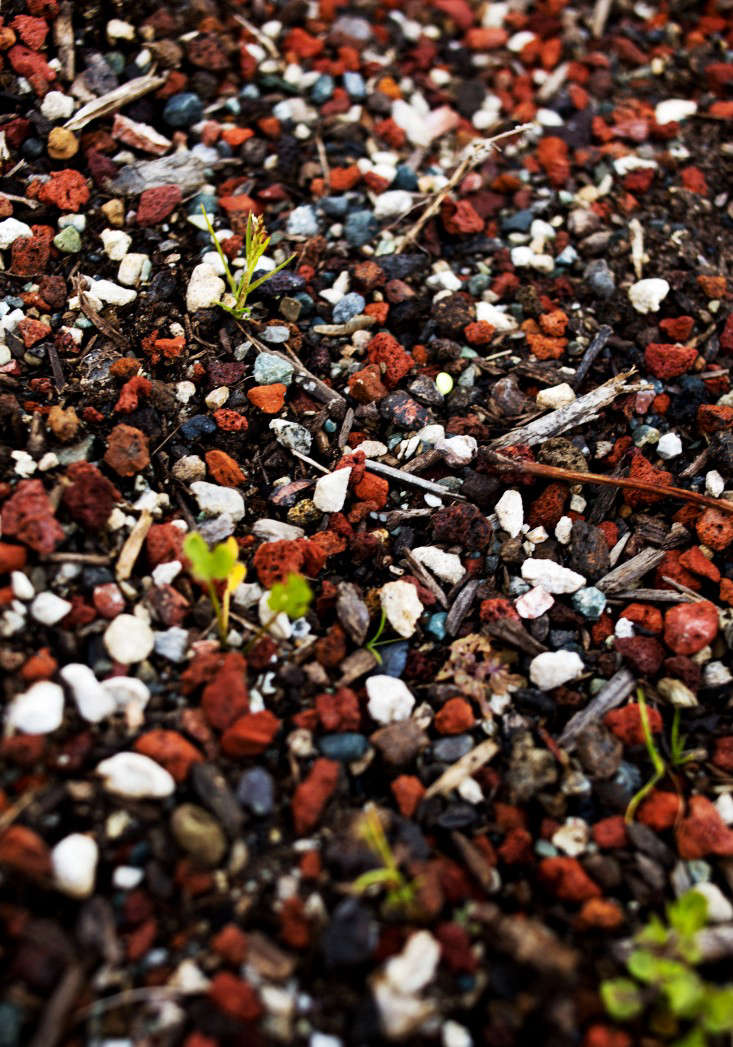 Above: Sometimes established plants are removed as an experiment to see what new plant will take advantage of the open soil. The red and white pebbles are volcanic rock, which makes up 45 percent of the soil’s content and lightens the garden’s weight on the roof. 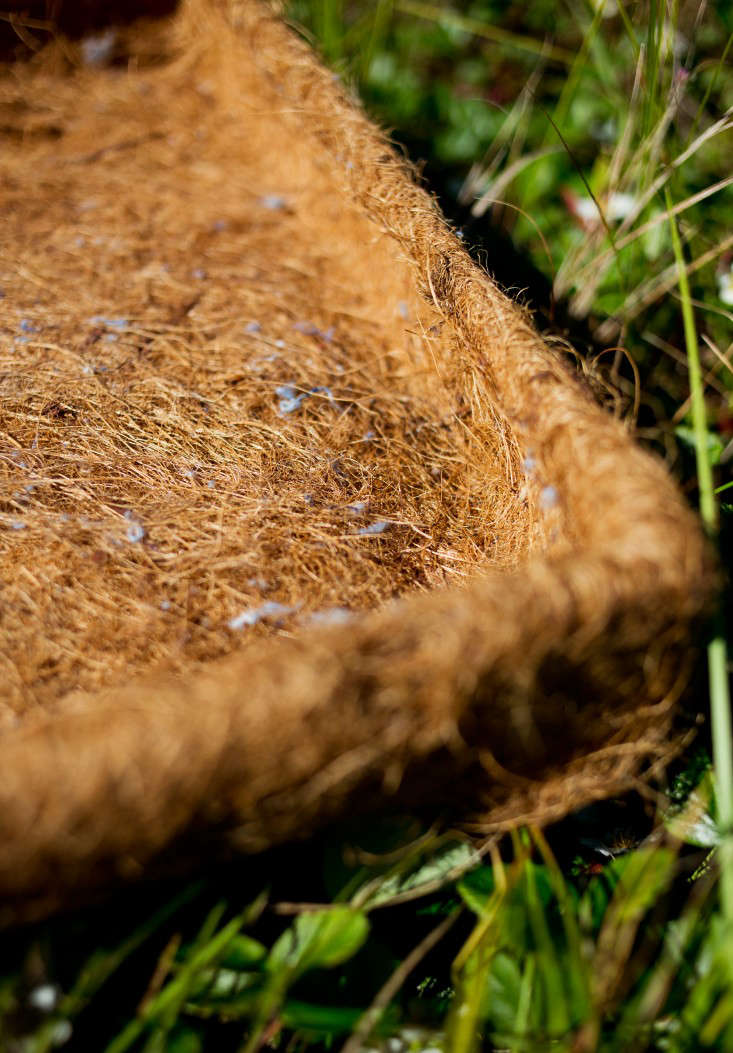 Above: To keep soil from sliding down the slopes, BioTrays made of coconut coir from design firm Rana Creek line the rooftop’s floor. The plants’ roots lace through and interlock the trays over time. For more information, see Rana Creek.

Perhaps because the rooftop is a quiet place, birds have chosen it as a place to nest. Last March, a nest of a killdeer with four eggs in it was found on the roof. The area surrounding the nest was closed off, to leave the birds in peace.

Above: The Academy of Sciences is at 55 Music Concourse Drive, San Francisco, CA. Museum hours are from 9:30 am to 5 pm from Monday to Saturday, and from 11 am to 5 pm on Sundays.

For a green roof on a residential scale, see Roof Garden: Cottages in the Mill Valley Forest and Architect Visit: Green Roof Design by Goode Green in New York on Remodelista.

Shopper's Diary: Stems, Brooklyn's Only Flower Shop in a Bar

Before & After: An Artful Gravel Garden in Sonoma, California