Originally from Southern Asia, the cucumber is a fruit that’s generally eaten as a vegetable. We grow several varieties in our garden in upstate New York, but the classic Kirby might be our favorite. A close second: the Mexican sour gherkin, which looks like a miniature watermelon.

Photography by Laura Silverman for Gardenista. 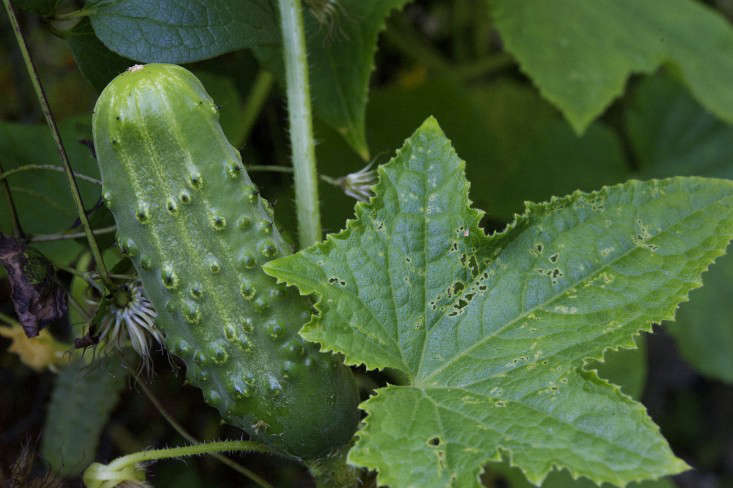 Above: The Kirby’s creeping vine has taken over the trellis where earlier this summer a clematis bloomed magnificently. 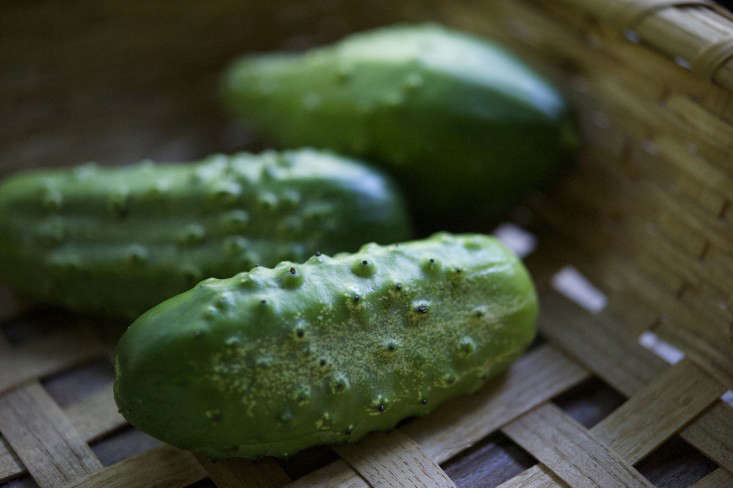 Above: The stubby, spiny Kirby was developed by Norval E. Kirby and released in 1920. Its sweet, mild flavor and super-crunchy texture make it ideal for pickling. 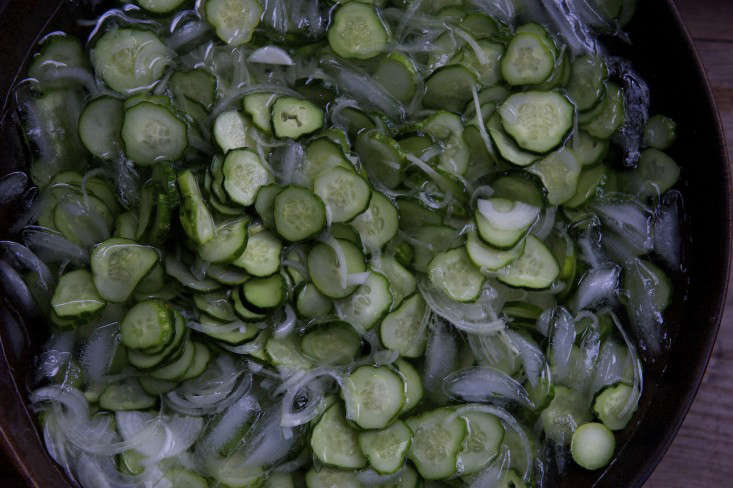 Above: Kirbys are delicious eaten out of your hand with a little salt, or made into a refreshing cold soup. I also use them to make bread-and-butter pickles all summer long. After slicing the cucumbers, I give them a good soak in salted ice water, which helps prepare them for pickling. 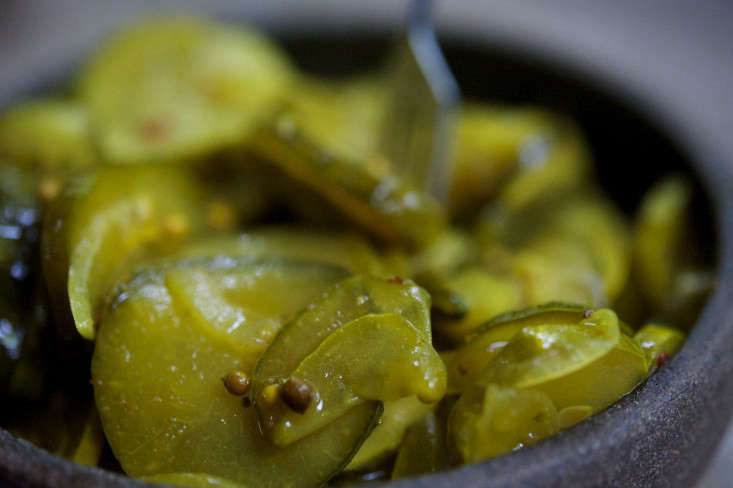 Above: This recipe produces slightly sweet, judiciously spiced pickles with a subtle kick from red chile and a beautiful golden hue from turmeric. They go beautifully with a grilled cheese sandwich and are absolutely essential with pulled pork.

In a medium bowl, combine the sliced cucumbers, onion, and salt. Mix well. Cover the mixture in ice water and let stand at room temperature for 3 hours.

In a pot, heat the sugar, vinegar, and spices until the sugar has dissolved. Rinse the cucumbers and onions lightly, and drain. Add to the vinegar mixture and bring almost to a boil, stirring to combine well. Remove from heat and let cool before transferring to a glass jar or other airtight container.

The pickles will begin tasting pickled after a few hours, but the flavor improves greatly if you wait a day or two. They will keep in the fridge for several months–if they last that long. 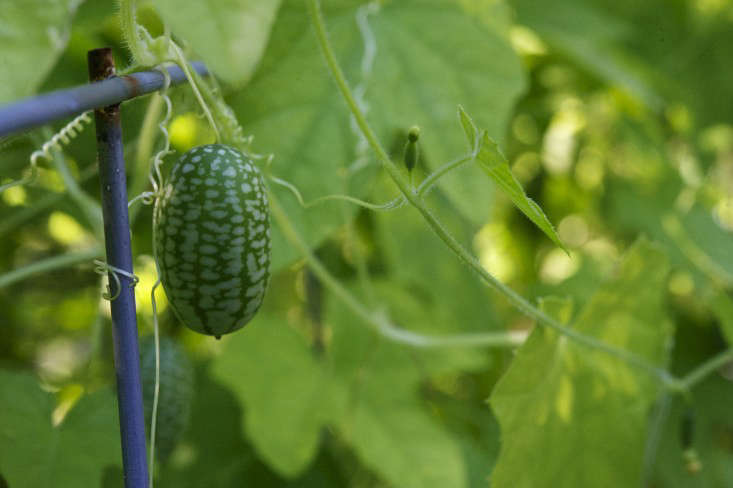 Above: The Mexican sour gherkin is not technically a cucumber, since it belongs to the genus Melothria rather than Cucumis. But its crisp skin, bright taste, and watery flesh make it an honorary member. It’s a reliable producer that likes to twine its slim stems around a trellis. 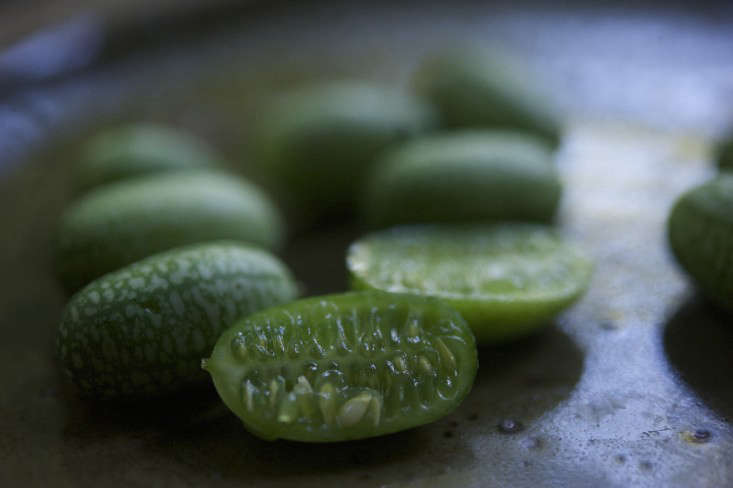 Above: This ancient heirloom variety of cucumber–eaten by the indigenous peoples of Mexico and Central America since pre-Columbian times–is a seedy fruit that looks like a tiny watermelon and packs a lot of tart, citrusy flavor. 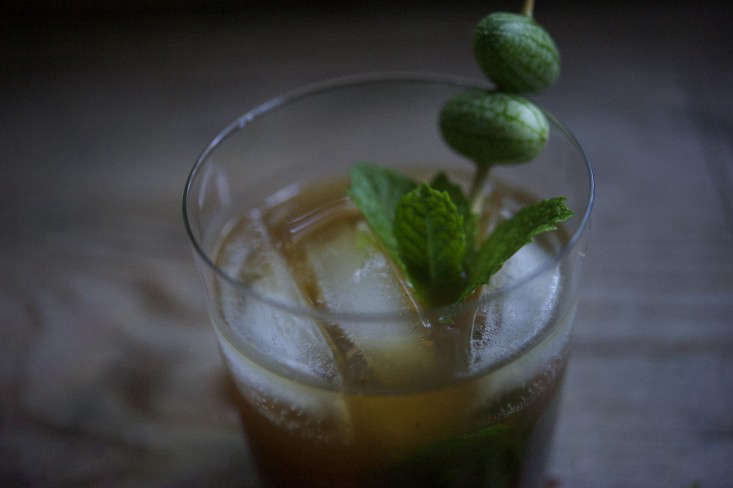 Above: Pickled in a vinegar brine spiced with coriander, garlic, and jalapeño, “cucamelons” make an ideal garnish for a dry martini.

Above: To eat them fresh, slice in half and toss in salads or sprinkle with chile salt. For a new take on the mojito, muddle them with mint and agave before shaking with aged rum and plenty of ice.

For more recipes from the garden, visit my blog, Glutton for Life.

Is there such a thing as too many fresh vegetables? If you just answered yes, check out other Garden-to-Table recipes on Gardenista.

In the forest highlands of southern Sweden’s Sma

Is it possible to cook for 18 without missing the

Why do flowers go in and out of fashion? In the 18

For anyone with a wood-burning stove or open heart