Three years ago, a pair of Berlin architects were hired to renovate a faded house and garden under strict architectural preservation–so strict, in fact, it was up for consideration as a UNESCO world heritage site.

The architects are Stefan Flachsbarth and Michael Schultz of bfs-design in Berlin, and the house is a 1957 bungalow designed by Bauhaus architect Eduard Ludwig, whose career was cut short by a tragic accident soon after this project was completed. The house has a courtyard garden and covered atrium, and its location at the end of a block of five houses that abuts a Berlin park ensures that the views are fantastic.

But by the time Flachsbarth and Schultz saw the house, it had been completely deformed, Schultz said. And preservation requirements slowed the remodel. Still, the architects figured out how to return the house and garden to a state that is a credit to its architectural history. 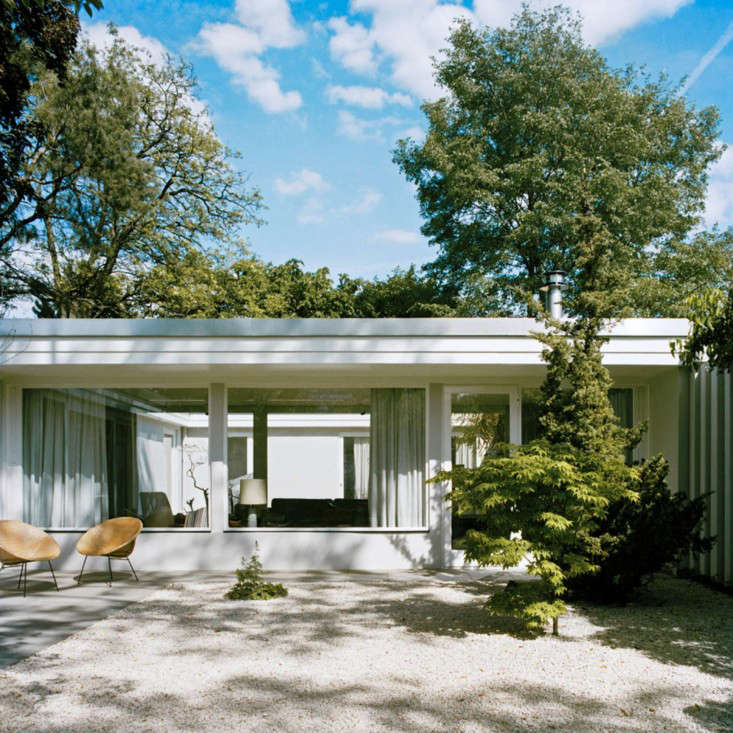 Above: A view from the open courtyard through the living room and into the atrium beyond.

Eduard Ludwig, a disciple of Mies van der Rohe, was well on his way to making a name for himself before he died in a car accident in 1960, a mere three years after this house was constructed. The house sits in the center of Tiergarten Park in the middle of Berlin, built as part of the Interbau development for the Berlin International Building Exhibtion in 1957. At Interbau, 48 architects–including Walter Gropius, Arne Jacobsen, and Le Corbusier–designed a housing development with a wide range of multi-family and single-family homes. 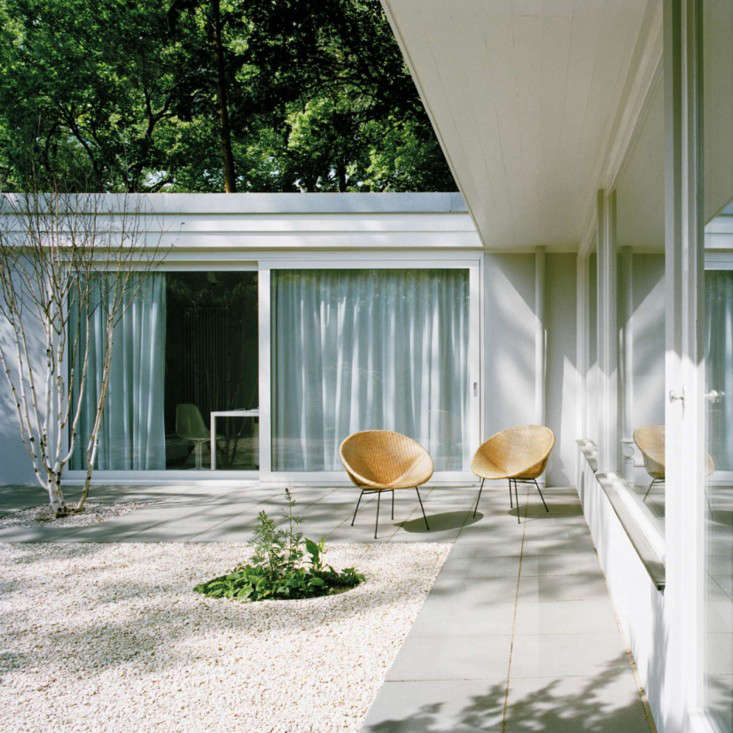 Above: A view from the courtyard garden into the office space. The living room is through the windows to the right.

Though the plants, including conifer and birch trees, were newly planted in the restoration, they were placed in the exact location of the original design. The architects used concrete slabs for the terrace and limestone gravel for everything else. There is occasional intentional tension between the boundaries of the limestone gravel and natural soil. 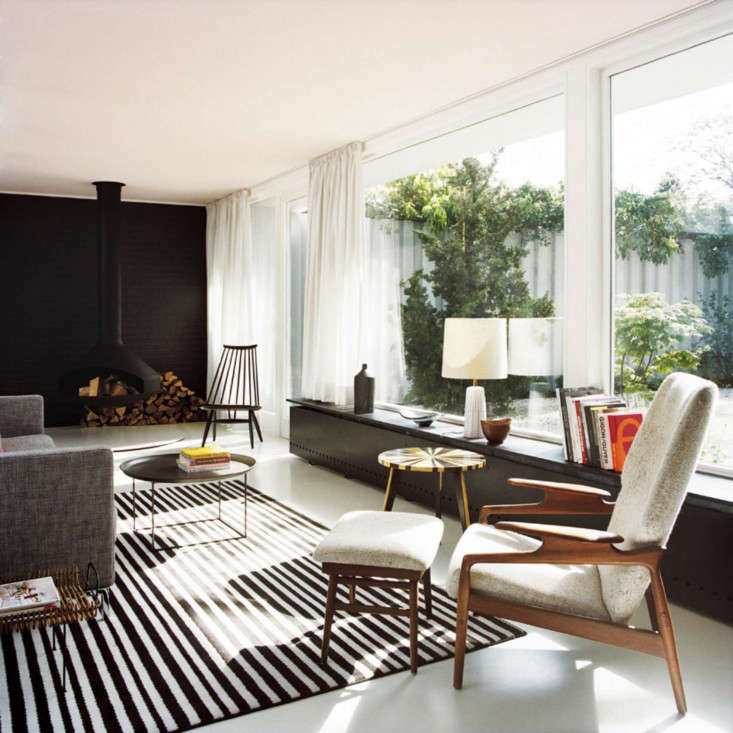 Above: The living room is filled with light, sandwiched between the open courtyard and covered atrium. The black tile wall and windowsill radiator cover are original, and new additions include a Porro carpet, Rolf Benz sofa, and Focus fireplace. Focus also manufactures high-quality outdoor fireplaces. For more about one of our favorite models, see A Disappearing Act: The Sigma Focus Wall-Mounted Barbecue.

Above: At left, a glimpse over the original black radiator cover into the covered atrium.

Above: Though the Focus fireplace is new, it’s reminiscent of one original to the house. The curtains are from Création Baumann, and the chair is Artek. Original linoleum flooring had been replaced by a cherry parquet floor by an intermediate owner, but the architects rejected both and settled on gray polyurethane flooring instead. 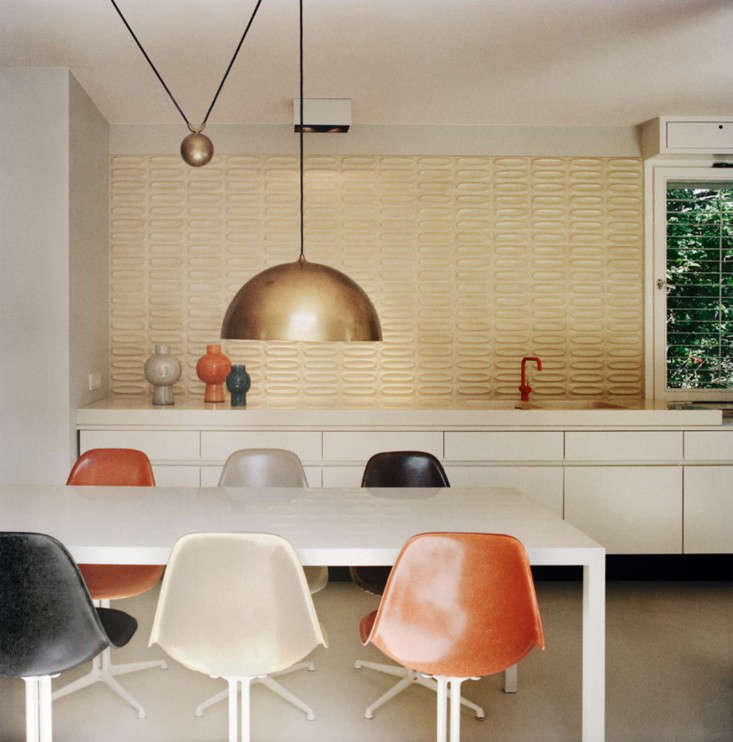 Above: The original kitchen furnishings had all been changed over time, so the architects were free to enlarge the kitchen area and install new furnishings and appliances. They settled on a color scheme of pink, cream, and white to reference the house’s midcentury origins.

The view from the kitchen window overlooks the public park. “Although the rooms are modest,” said Michael Schultz, “with the many views out of the house one never gets the feeling of being enclosed.”

Above: Despite the large windows throughout the house, the home is actually quite private due to tall surrounding walls. The original garage door was stripped of paint and returned to a raw wood surface as Ludwig intended it.

For more from Stefan Flachsbarth and Michael Schultz of bfs-d studio, see The Ultimate Timesaver: DIY Dinner in Germany.

For more courtyards and atriums, see: