“This is phenomenal,” says my boyfriend Nate, tucking into a skewered and seared sausage laced with Thai lime and enjoying the panoramic views from the Brooklyn Grange’s rooftop farm. He catches a glimpse of the menu. “But what do they mean by ‘aged beef parts’…?”

What they mean, actually, is very gamey and tough beef livers from 17-year-old cows, leftovers donated from Fleishers. But really, does Nate need to know this so early in the evening?

“It means that Chef Winston Chiu’s menu is composed entirely of ‘composted’ odds and ends, made delicious and beautiful,” I tell him soothingly, refilling his wine glass.

And this is true. This is the second consecutive year that Chiu has joined forces with the Brooklyn Grange team to put on a Compost Dinner at the Grange’s 65,000-square-foot rooftop farm at the Brooklyn Navy Yards. The night begins with cocktails served in re-used cans, containing “honey hooch” made from the leftover Brooklyn Grange honeycombs that have a primary use as a soak in Kings County Distillery’s for-sale whiskey. Chiu and his team from catering company BonBite have created a five-course menu featuring Brooklyn Grange produce and herbs not fit for sale, as well as passed-over items from local butchers and fishmongers: pig heads, fish parts, and the “aged beef” in question. Guests sit at a long communal table made from refurbished antique wood furniture, and are given discarded fabric swatches to use as napkins. Plates are banana leaves. Silverware is minimal and improvised, including the use of the skewers from course two as chopsticks for course three.

From the first sip of hooch to the last bite of sourdough ice cream, the evening is a thorough education in reducing waste and dining sustainably.

“Think about an orange,” says Anastasia Cole Plakias, vice president and founding partner of Brooklyn Grange. “It takes almost 14 gallons of water to grow a single orange. When we talk about food waste, we’re not just talking about actual food material being scraped off of a plate into the trash—we are also talking about the energy that went into producing it: water, labor, herbicides, pesticides, harvesting, transportation, packaging, and shipping. There is energy that then goes into breaking down discarded food as it enters the waste stream. That huge amount of energy of the entire system is what we are looking at when we think about food waste.”

Brooklyn Grange was founded in 2010 when Cole Plakias, Ben Flanner, and Gwen Schantz joined forces to open the flagship location, a 43,000-square-foot rooftop farm in Long Island City. In 2012, the team opened the Brooklyn Navy Yard location, 12 stories high and looking out over the East River (a backdrop against which I coerce Nate into joining me for an unthinkable number of selfies). Between the two urban farms, Brooklyn Grange grows more than 50,000 pounds of organic produce per year. Its main retail channels are wholesale to restaurants and small grocers, farmers’ markets, and a subscription CSA service.

But what about the crops for which there’s no market? That was the driving question behind Chiu’s idea for the Compost Dinner, which he initially pitched as a “gleaners dinner,” playing on the old-school term for when town locals would come to a farm after its harvest to collect the crops the farmers couldn’t sell.

After the BonBite team moved into the same Navy Yards building as the Brooklyn Grange, they started to explore the upstairs farm. “I was always curious, and would poke around and ask ‘Is this edible? Is this? What do you do with all this excess? Do you really pick and sell all this?’” says Chiu. “I thought it would be cool to harvest all the underutilized stuff and make a really genuinely good dinner out of it.”

Chiu’s clever menu riffs on the concept of compost many times over. The first of several highlights is a steamed bao bun cradling an artfully constructed terrine of pig head from Fleishers, accented by opal basil and anise from the Brooklyn Grange. The beef offal sausage is served with a spicy sauce of pickled peppers from last season served in recycled oyster shells (pickling is a technique the BonBite team uses frequently to stave off spoilage, says Chiu). Nasturtium leaves serve as “taco shells” for a smoked beef shank and cabbage slaw. A fish curry made from shells and fish carcasses from Greenpoint Fish & Lobster Co. is served inside coconut shells used as bowls (the shape of which turns out to be ideal for frantic slurping). Most important, all of the ingredients and serving dishes used throughout the meal can be thrown into Brooklyn Grange’s compost at the end of the night.

For home gardeners looking to incorporate the compost spirit into their own repertoire, Cole Plakias has a few words of advice: “Instead of trying to grow something like tomatoes that take a ton of water, labor, and energy—and which you will always eat anyway, if you buy at the grocery store—start by growing herbs,” she says. “You never eat the entire bunch when you buy them, and they are way more flavorful and delicious when you grow them yourself.”

“And the best way to reduce food waste if you’re not able to grow, is to cook,” she says.

Chiu echoes this—”Be prepared. Have a few tricks up your sleeve like dehydrating, pickling, or making pestos,” he says, and reducing food waste can become easy and convenient.

I’m looking forward to trying out their suggestions in my own kitchen. Nate has requested that I start with the hooch. 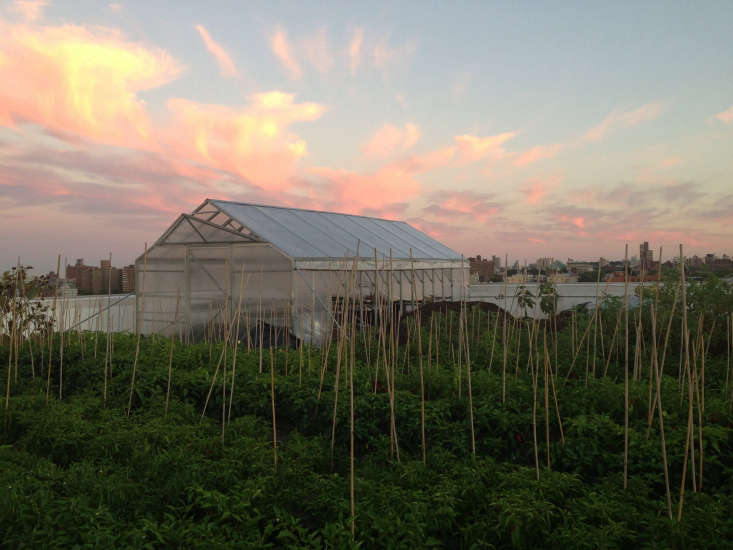 Smart Home: Robots in the Garden