When Bettie Webster first came to Menorca, one of the Balearic Islands close to Barcelona in Spain, there were just a few houses and automobiles, and all were of the ancient variety. The farmer would go past with his mother, driving a horse and buggy.

That was in 1972. The road beside her house is still unpaved, rare in Menorca now, but the atmosphere in this house and garden retains something of what it was, 40 years ago and beyond. It was certainly lived in by 1760, as indicated by a scratched date indoors, but probably comprised a group of houses centuries earlier. 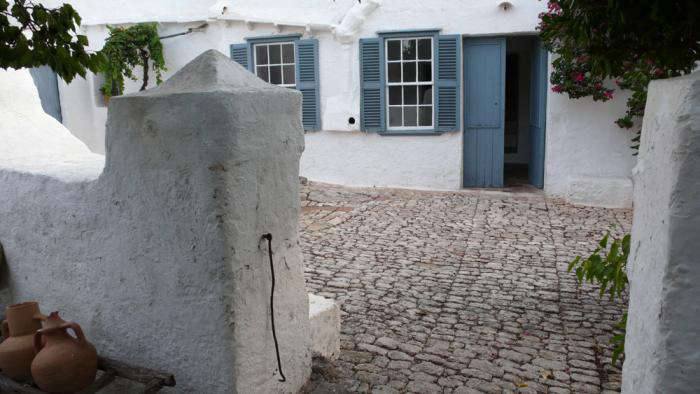 Above: The shutters and doors of most of the farmhouses and townhouses on Menorca are a variation of dark green. It is Bettie’s genius to have mixed a color which is different but not wrong. After years of hand-mixing, Bettie’s color Gris Oscuro Bettie (Bettie’s Dark Gray) is available to buy locally (at Bernat Petrus) and across Spain. 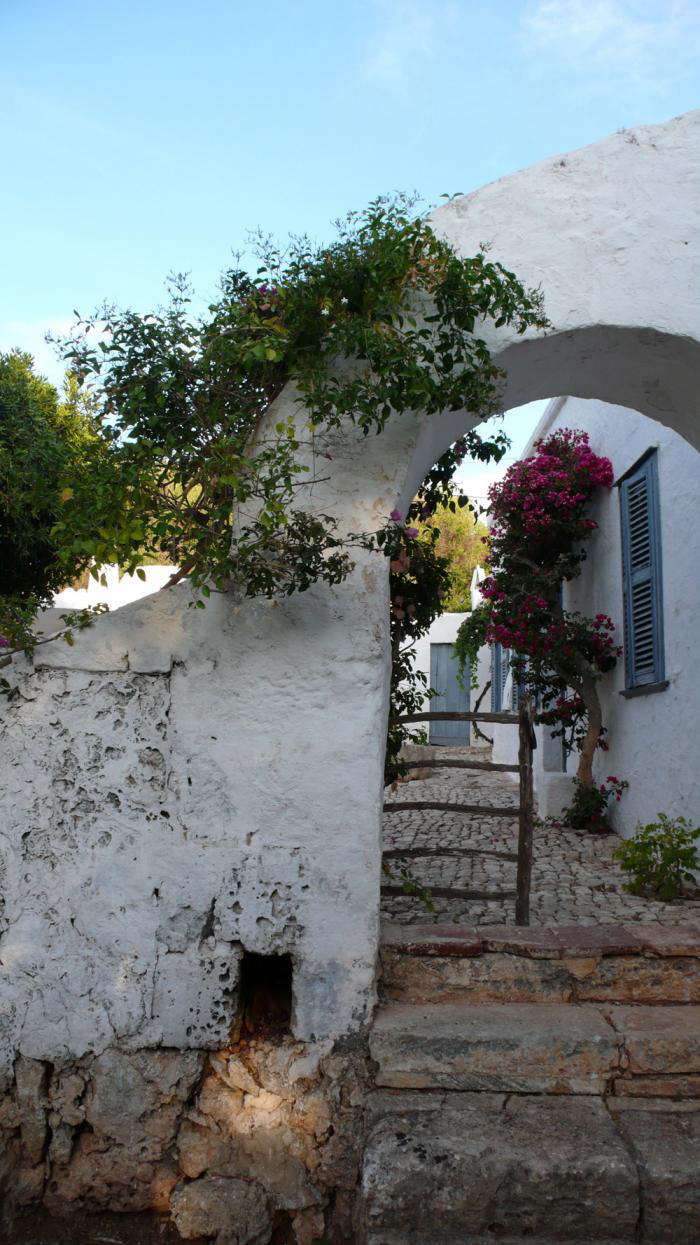 Above: The houses and walls of Menorca rise out of rock. The courtyard, planted with bougainvillea and wisteria as seen from the garden. Holes like this in the walls of Menorca are for water drainage.

Above: Low dry stone walls, with wooden gates made from olive, are the beginning of all the iconography of Menorca. Photograph by Jim Powell. 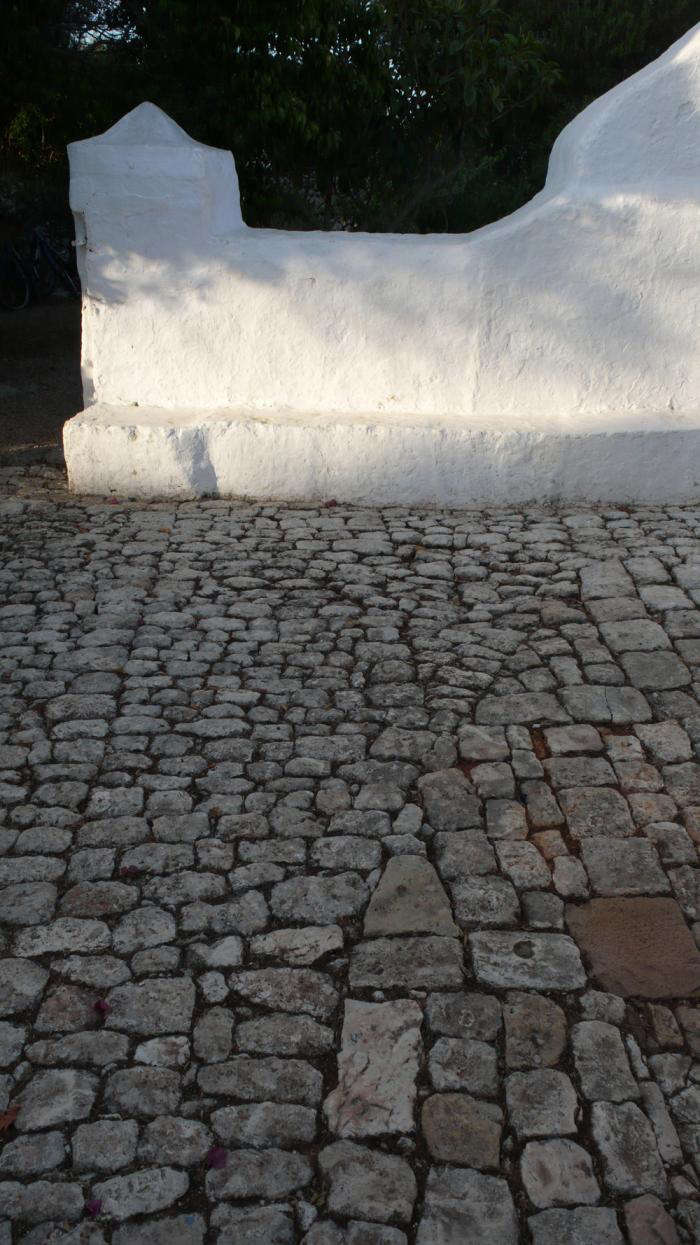 Above: An unusually shaped perimeter wall divides the courtyard from the unpaved area next to it, which houses a large outdoor bread oven, or forno, plus some small animal dwellings. 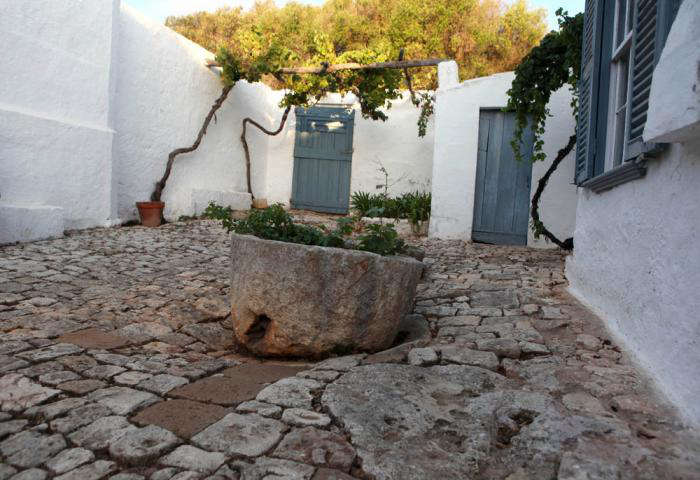 Above: Cobbles meet rock plus an oversized stone basin brought over by the local farmer. Vines decorate the entrance from the street. Photograph by Jim Powell. 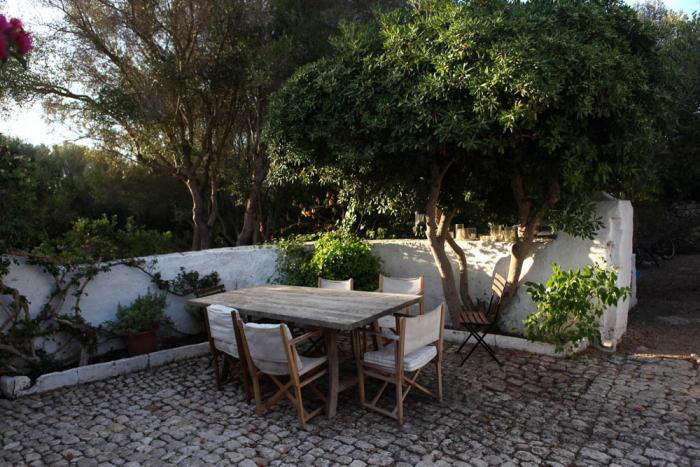 Above: The outdoor eating area. Flower beds are edged with mares, a local limestone. It is naturally white and blends in with old building stone, which is white-washed. The table is made of pine, with curved legs of olive wood which follow the natural shape of the branches (see gate below). Photograph by Jim Powell. 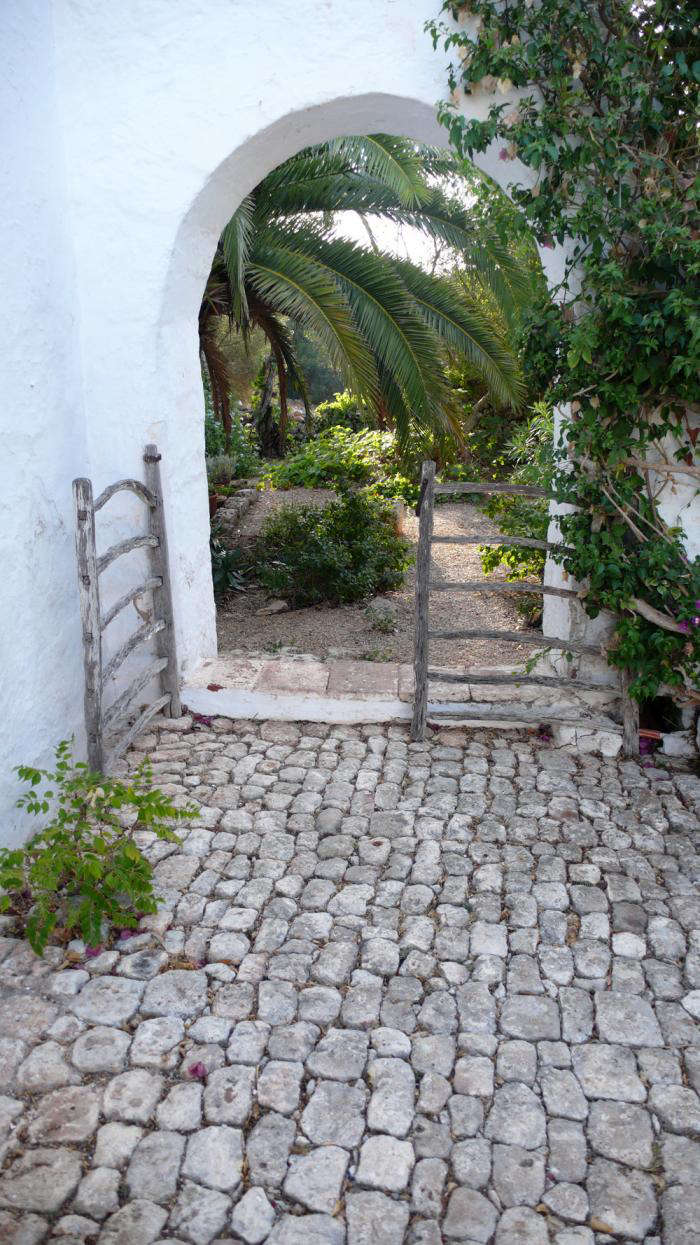 Above: A restored arch leads from the cobbled yard to the gravel garden. A gardener who worked for the large farm down the road lived here at one time and it is clear that this garden has been cared for over the years. More usual are fields cleared of underbrush with a few olive or almond trees remaining. 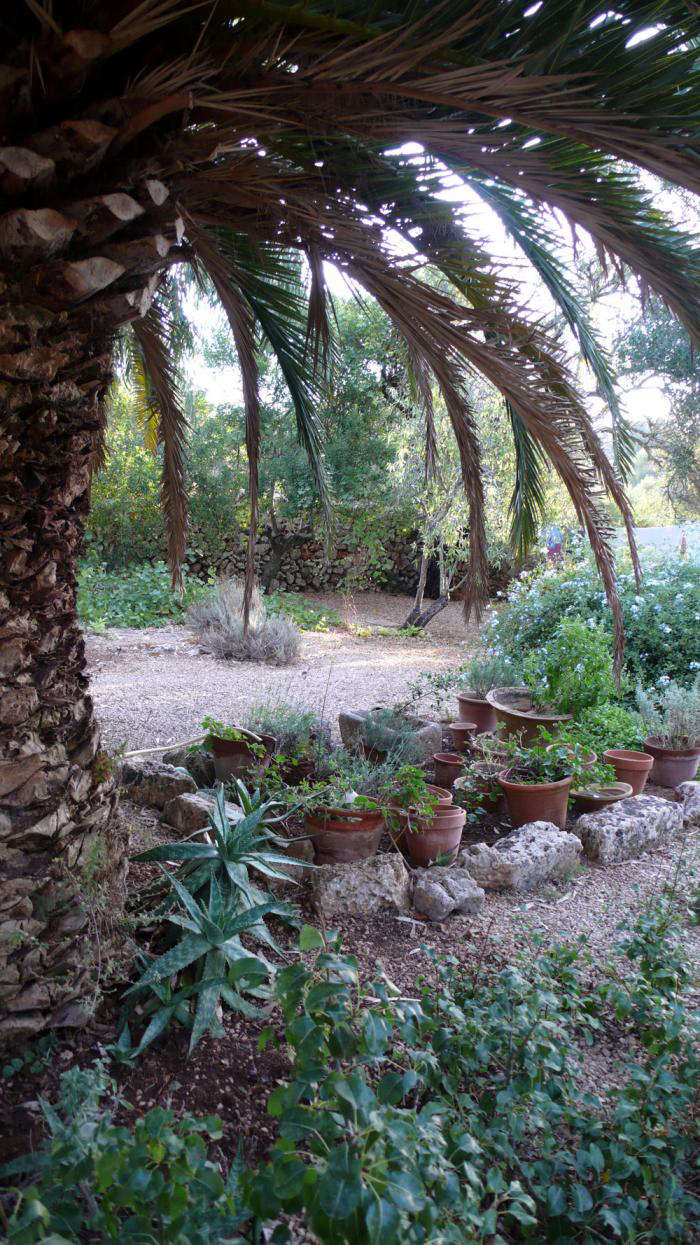 Above: A palm tree dominates this cool area by the east side of the house. An old flower bed delineated with stone is now the home for potted plants. 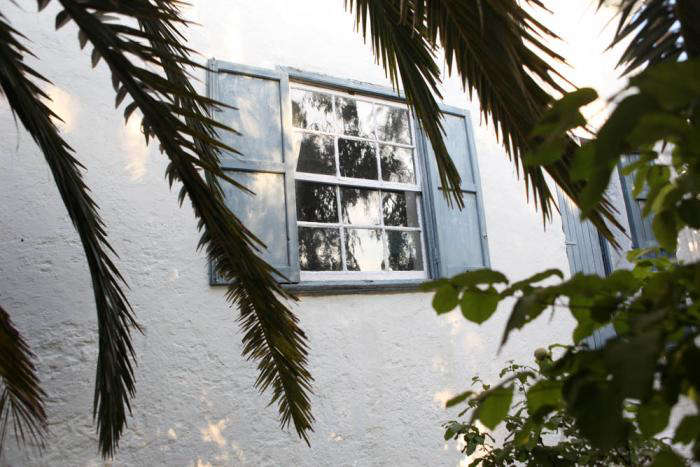 Above: The sitting room from the outside, framed with palm. Photograph by Jim Powell. 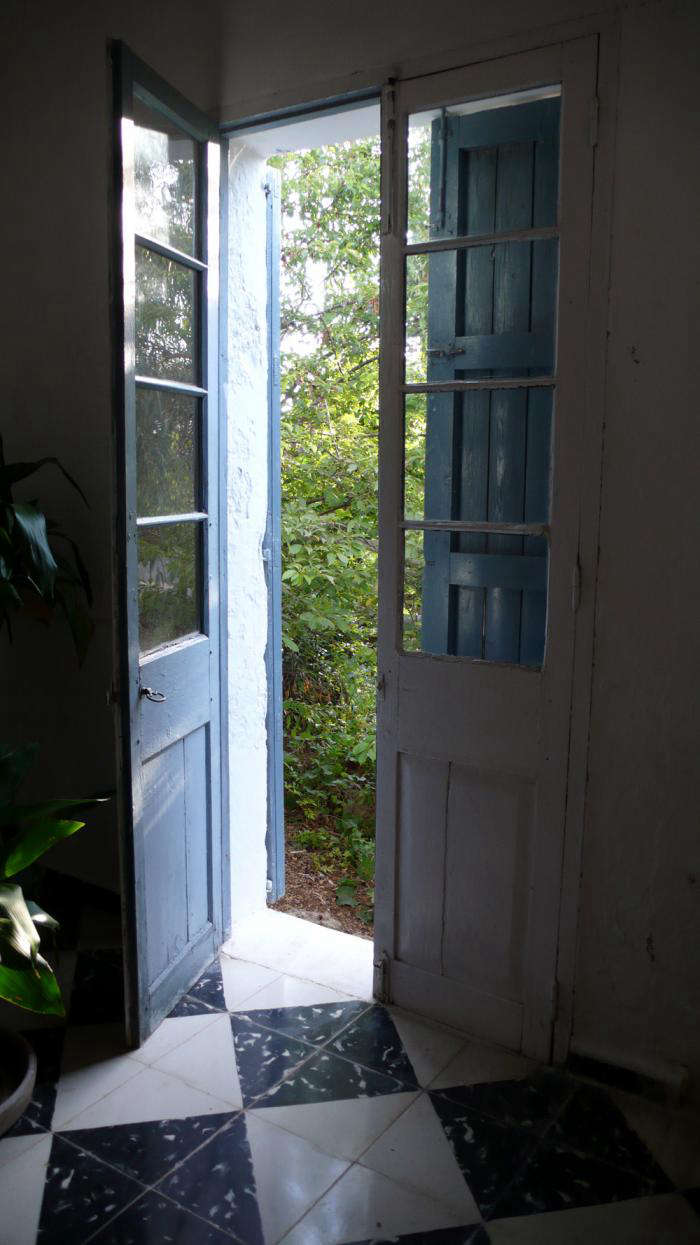 Above: The double doors, like all the windows, are shuttered to keep the house cool. Originally the house had a terracotta floor, which had become very rough and uneven after years of wear. Somebody got fed up with it in the 20th century and covered the ground floor with smooth, sweepable Spanish tile. Not without its own charm. 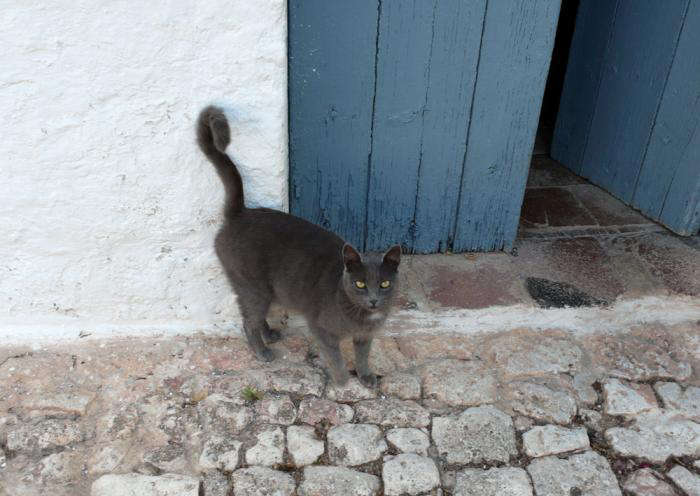 Above: A contrast of grays. Mini Max the cat shimmers against Bettie’s front doors.

Continue exploring Spain with our series Travels with an Editor: Barcelona.

A Classic from Spain: The Marquina Olive Oil Cruet

Design Travel on Remodelista: 4 Stylish Spots to Stay in Scotland

100 Gardens to Visit Before You Die