At the foot of the 16th-century Amber Palace near Jaipur, India, is Hathigaon, a village designed for 100 elephants and their caretakers. Though the concept sounds sweet, it–and its larger context–is serious business.

Elephants have long been revered in India, but the job of an elephant caretaker–called a mahout–is low-paying and dying out. Animal-rights groups have raised concerns about elephants held in captivity, and such elephants sometimes become sick from lack of water and proper sanitation. Elephant-tending is a complicated tradition, but mahouts (and their families and elephants) still need access to clean water and stable housing.

Near Jaipur, the local government took steps to improve the situation and hired RMA Architects, based in Mumbai and Brookline, Massachusetts (founder Rahul Mehrotra is a professor at the Harvard Graduate School of Design) to design a low-income housing project for the animals and their people. The architects first needed to prepare the available landscape, a former sand quarry, for habitation. They created artificial pools to harvest rain runoff, and oversaw an extensive planting of local trees for shade and soil stability. 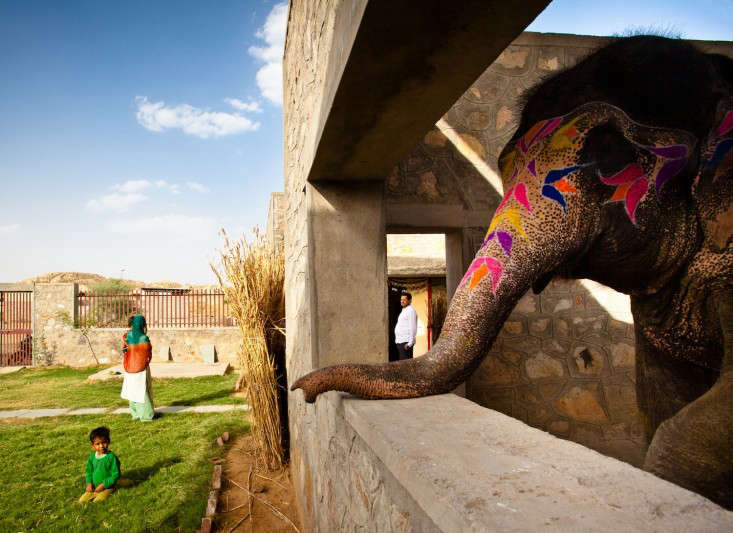 Above: The housing units–for both elephants and humans–are clustered around courtyards that function as shared community spaces. Photograph by Carlos Chen. 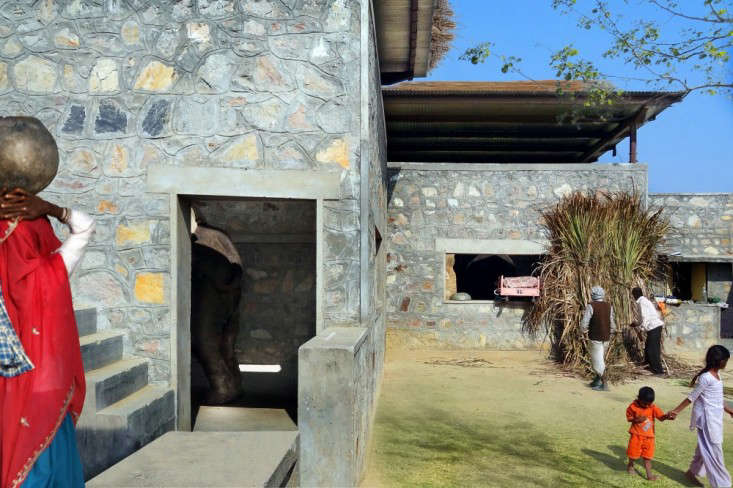 Above: The elephants and their caretakers are always within sight of each other, but the elephants enter and exit their units away from the shared courtyard spaces; that way, kids can play and families can cook without being unnecessarily close. Photograph by Carlos Chen. 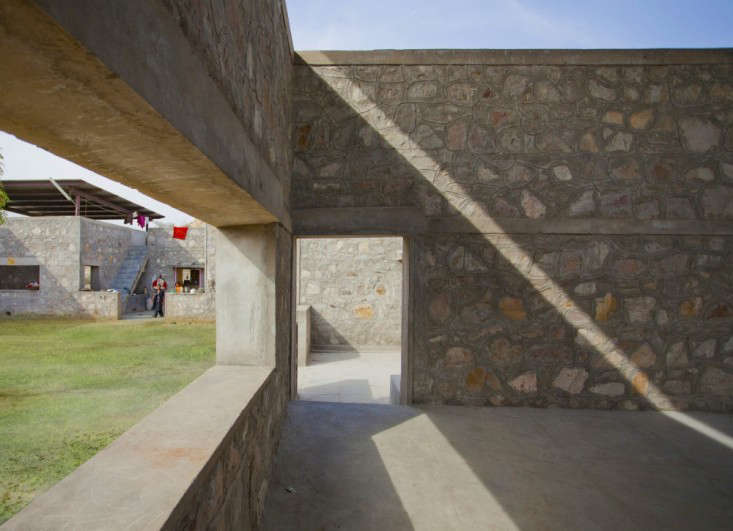 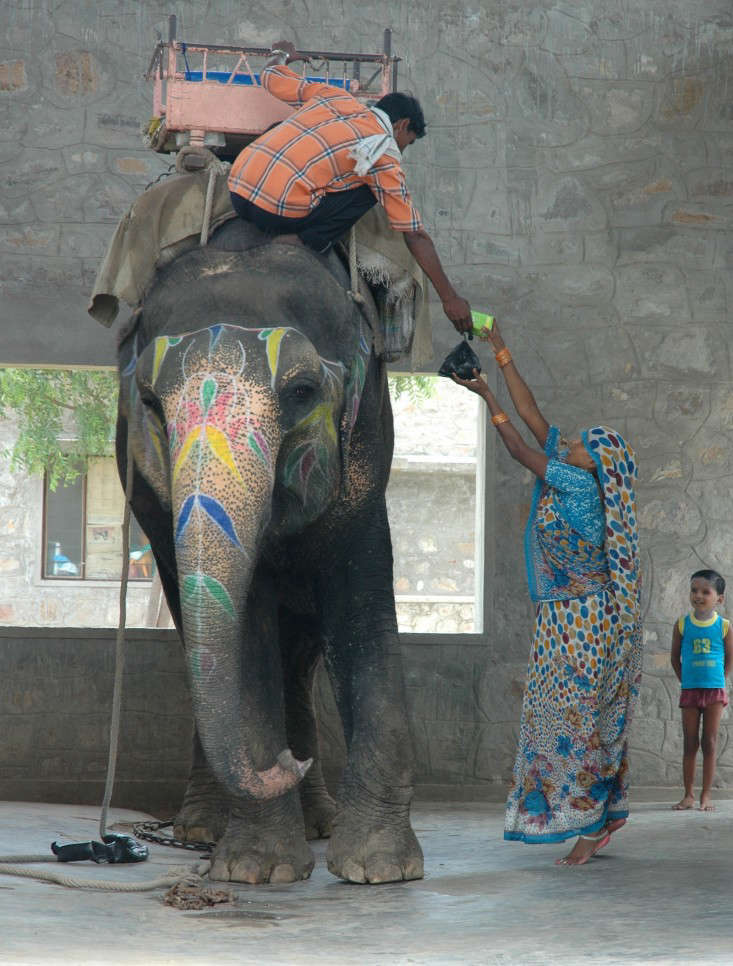 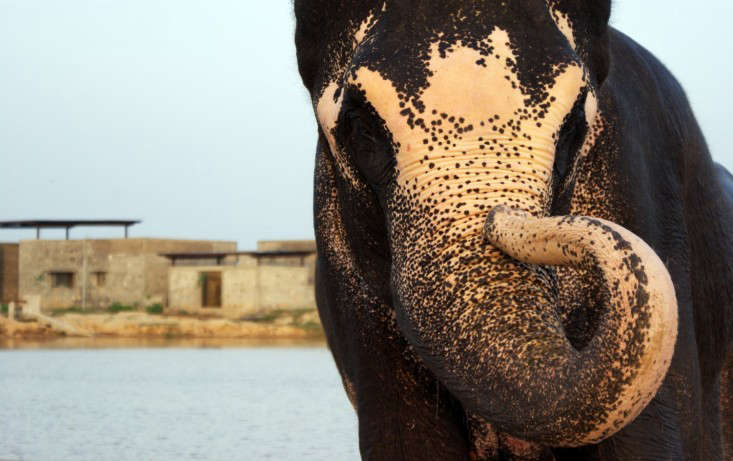 Above: The mahouts are not the owners of their elephants, so most of the money they earn with their animals must be handed over to the owners. Photograph courtesy of RMA Architects. 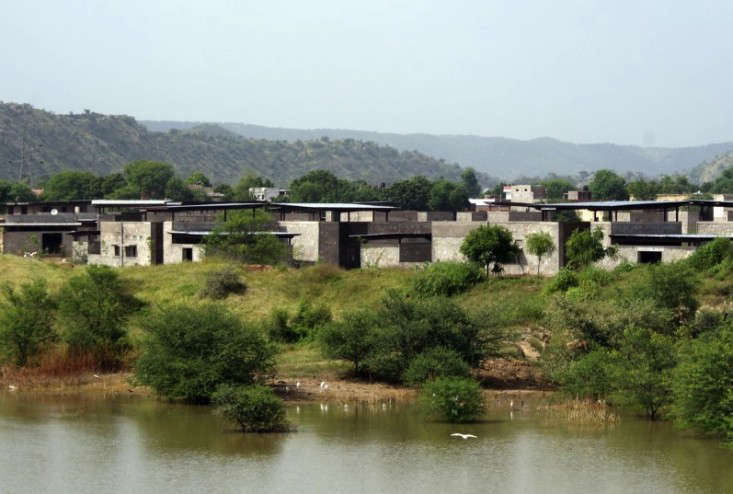 Above: The goverment-funded project dedicated few resources to actual architectural design, so the habitats are structurally with minimal finishes. Units are made of local stone with corrugated metal roofs, atop which elephant food is meant to be stored. Photograph courtesy of RMA Architects. 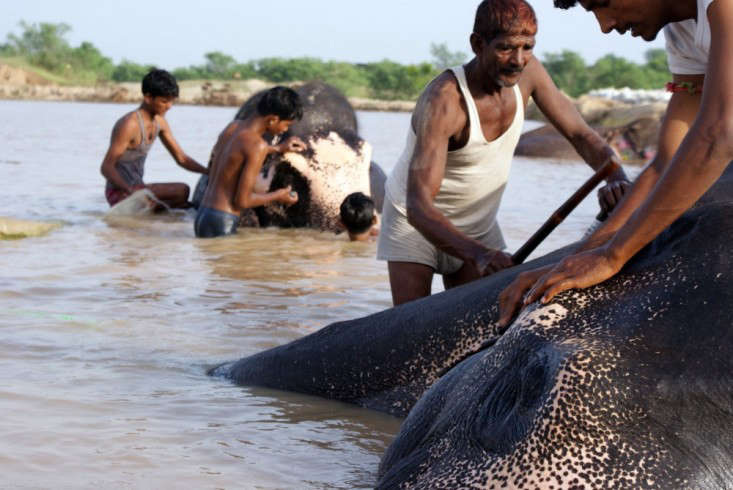 Above: Water is critical for sustaining life in the village, but also allows for bathing the elephants–important to the elephant’s health and the bonding between animal and caretaker. Photograph by Rajesh Vora. 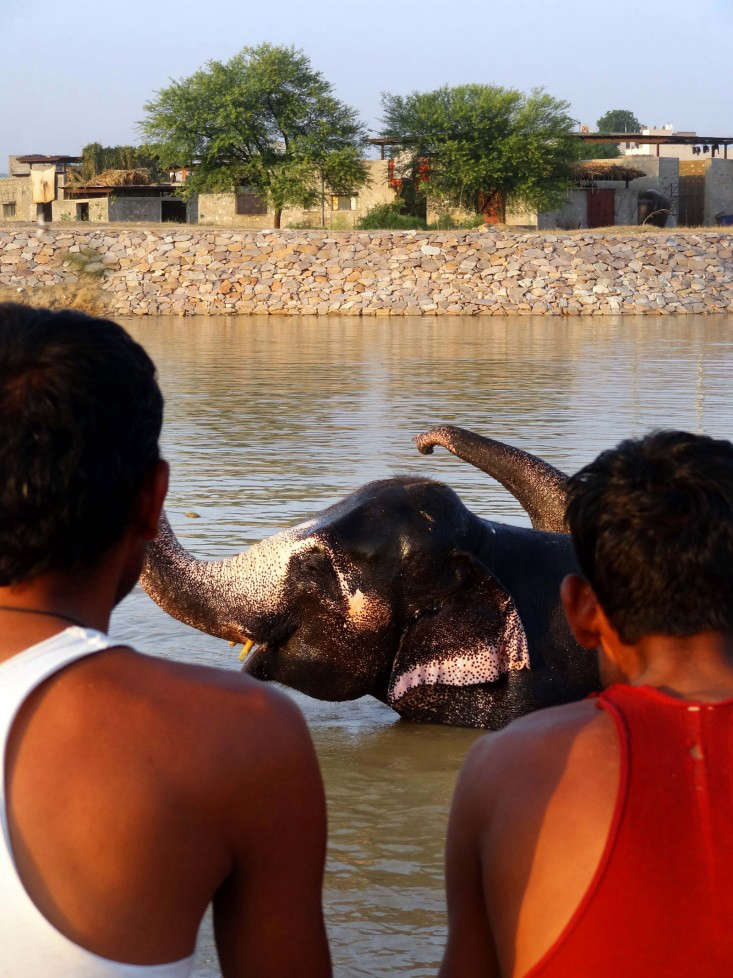 Above: The mahouts bathe the elephants at the end of every day. Prior to the hathigaon development, lack of water and proper sanitation caused poor health in some of the animals. Photograph by Rajesh Vora. 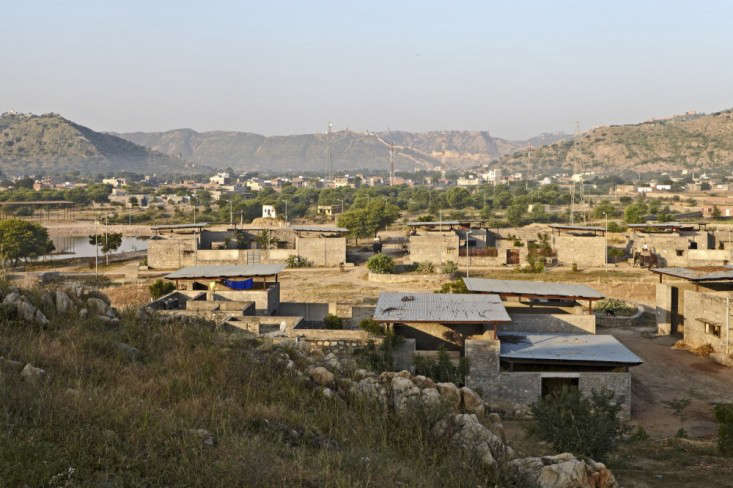 Above: The units house all of the city’s elephants and their keepers and families. There is enough water to meet the needs of the community twice over, in case of years of drought. Photograph by Rajesh Vora. 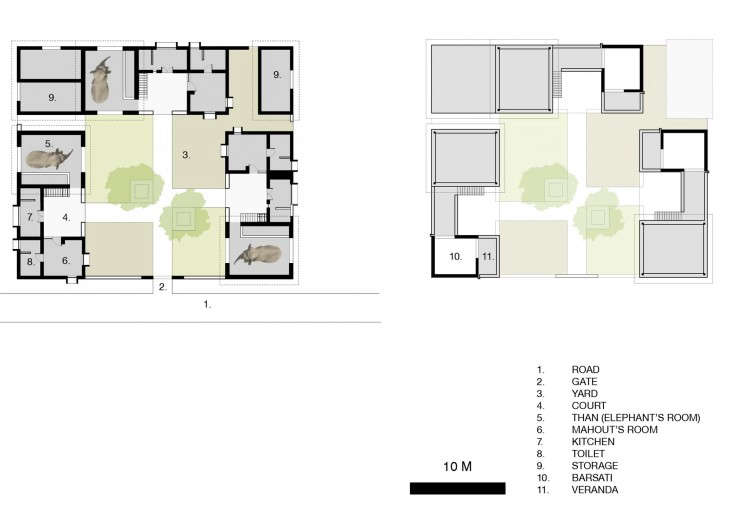 Above: An example of the community floor plan. Image courtesy of RMA Architects. 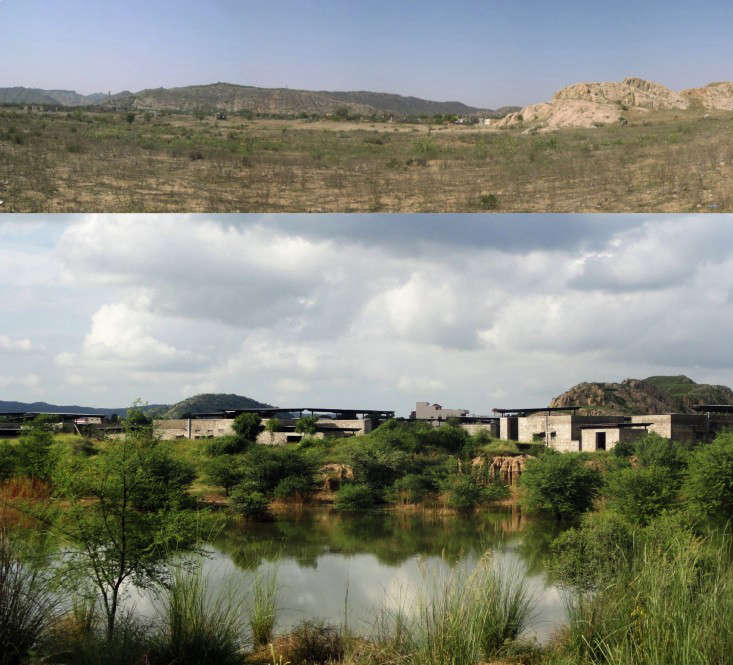 Above: At top, the land shown in March 2007, razed after years of use as a sand quarry. At bottom, the same place in September 2010. Photograph courtesy of RMA Architects. 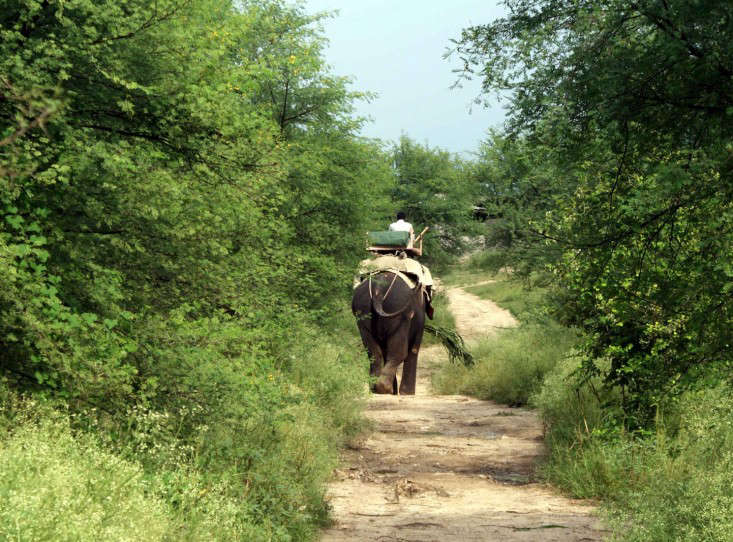 Above: Animal rights groups have raised concerns about elephants in captivity, and local governments are taking steps to improve the lives of the animals. Mahouts now use wooden sticks to control the elephants, as the sharp hook of the traditional tool has been banned. Photograph courtesy of RMA Architects.

Read about another desert landscape in Haute Bohemia: Korakia Pensione in the California Desert.

7 Surprising Facts About Raising Chickens Not Found in Books

Killiehuntly Farmhouse: An Organic Garden in the Scottish Highlands