In 2002, landscape architect Astrid Hölzer and her husband bought a two-story apartment in a typical Dutch “herenhuis” (circa 1909) in Rotterdam. The apartment, on the top two floors of the townhouse, had a balcony, but not other outdoor spaces. Says Hölzer,  “My husband and I are both landscape architects and wanted to make a statement by design there’s no need to leave the city for a house with a garden. It can be done on the rooftop.”

So they started designing.

The result? A year-round rooftop garden with a a wildflower meadow, a vegetable and fruit patch, and a glassed-in sunroom where they can watch the sun set even in windy, wet, or cold weather. Total cost: 20,000€. 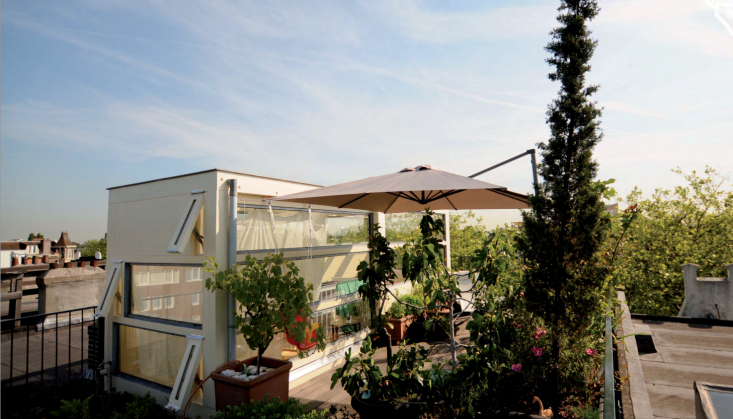 Above: To create access to the rooftop’s 39-by-39-foot sunroom, Hölzer extended the house’s interior staircase up an additional flight. The sunroom’s roof is made of reinforced glass panels, opening the view to the sky. 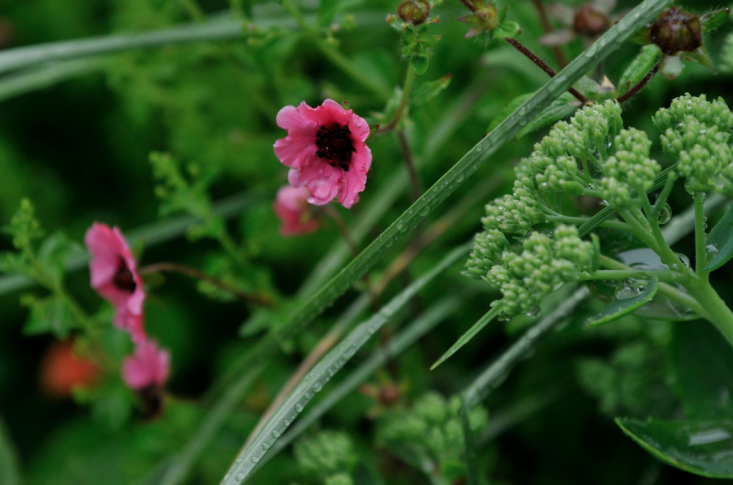 Above: Plantings on the 100-square-foot roof make the summer temperature perceptibly cooler than on the neighbors’ adjacent flat roofs. 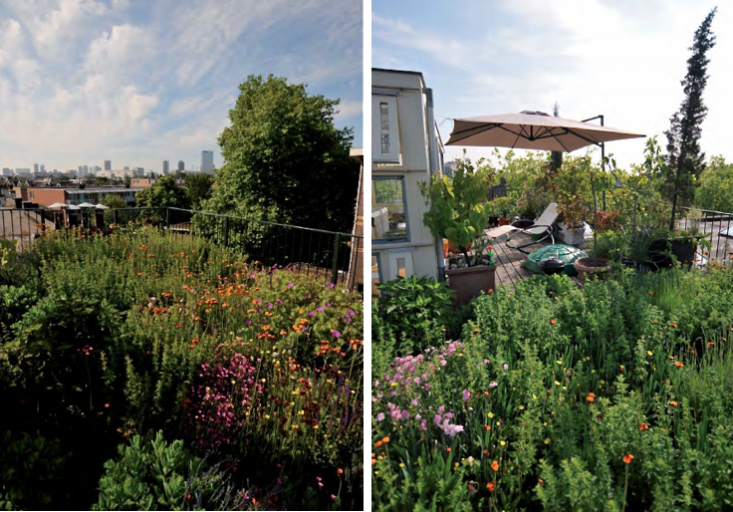 Above: “In Rotterdam, it can be extremely rainy and windy, so a nice place to sit and watch the environment was definitely on the wish list,” says Hölzer. “Because I love citrus trees and other Mediterranean plants, some of which need to be inside in winter even in a mild climate as in the Netherlands, the choice was made to have a winter garden or ‘sunroom’ on the rooftop.”

Above: “It’s just amazing what a garden feeling can be created in a soil layer of 12 centimeters on average,” says Hölzer. The soil depth is 8 centimeters on the perimeter of the roof and about 15 centimeters in the center.

“The flowers attract lots of bees, and the smell of hyssop and thyme and other herbs is just wonderful in summer,” says Hölzer.

Above: From the street, the rooftop garden is “a small, more shadowy habitat, with a sun-exposed section facing southwest,” says Hölzer. Plantings include drought-resistant perennials, grasses, and low shrubs. Herbs such as thyme, oregano, and lavender are among the plants.

Above: The first step in the construction of the rooftop garden was to retrofit the decades-old roof so it could bear the weight of the deck, soil, and plants. The roof got a new waterproofing layer and a root barrier. The green-roof system came from ZinCo Green Roof Technology.

Above: “We had a structural engineer help us with the calculations, which needless to say is most crucial,” says Hölzer. “It turned out that the old timber construction of our house was able to carry enough weight to support the structure, the terrace, and the green-roof system building.”

Above: The deck floor is European larch.

Above: “The plants migrating according to their love of sun or shade even in a small scale garden like this one,” says Hölzer. “All but one of the sedum species we planted have migrated to the drier edges; they don’t grow well between the herbs.”

The edible garden produces a harvest that prompted Hölzer to make batches of Myrtus jam, pumpkin soup, and candied citrus peel “from my Rotterdam citron.”

Above: The rooftop plantings were installed in 2005 and the sunroom was completed the following year. In the mature garden, “there is still some space left for to sit, totally immersed in green,” says Hölzer.

Above: Craving a garden on top of the world (or, at least, on top of the house)? See 191 more photos of Roof Gardens in our Image Gallery.