When it comes to arranging flowers, I admit that I’m most fond of the non-arrangement–that certain brand of bouquet that’s more mess than meticulous. This week is going to be all about Paris, and we’re going to kick things off with a decidedly domestic arrangement that makes use of the colors so often associated with the French countryside. These flowers were grown in New England soil, but in shades of white and blue and yellow, the bundle has a little je ne sais quoi that to my eye is perfectly French.

My mom and dad still live in the house that I grew up in in Connecticut. The colonial farmhouse sits more or less in a marsh, which means that lawn maintenance can be something of a challenge. And for a duo that agrees on most things, for my parents the question of lawn care is something of a debate.

Were my mom to have her way, I’m fairly certain the whole thing would be planted in wildflowers. Were my dad to have his, the place would look closer to the well-manicured gardens at Versailles. (I recently tried a bit of an intervention and had my dad read Kendra’s piece, Can We Please be Less Fanatically Tidy).

By way of compromise, my parents decided to make one section of the yard into a miniature meadow using seeds purchased from American Meadows. At this time of year that means a whole patch of shasta daisies. Perfect for cutting, these are wildflowers that really hold their own in an arrangement. For this meadow muddle, I began with a big bunch of them.

Above: To complement the bright yellow centers of the daisies, I pillaged the tiny patch of wild buttercups growing near the driveway.

Meadow Buttercup is an annual that re-seeds; it thrives in marshy areas. A packet of 1,000 seeds is $2 from Prairie Moon. 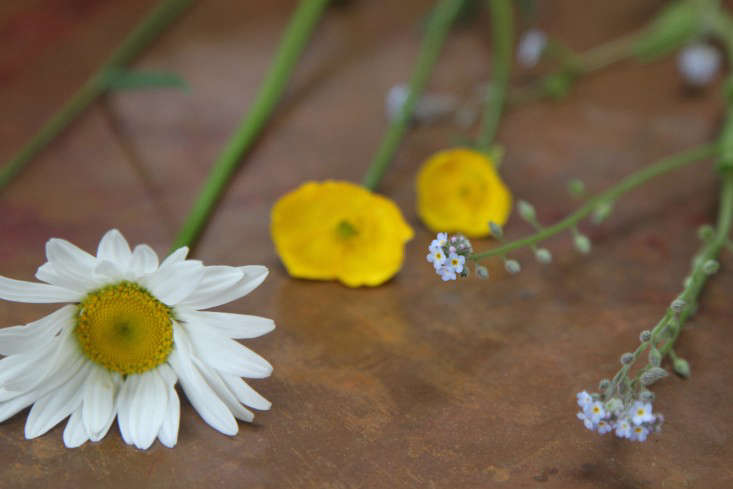 Above: And for a bit of blue, I trimmed bunches of miniscule forget-me-nots with tiny yellow centers.

A packet of Forget-Me-Not seeds is 65 cents from American Meadows.

Above: Using a trick I learned from my sister, I built this arrangement in my hand. Adding tall cuts of catnip along with grasses from the meadow, forget-me-nots, silver nettle vine, and artemisia from my mom’s shade garden. I added a few large leaves of lady’s mantle around the base of the arrangement. I like to think of them as forming a smart little peplum.

Above: When I finally had a look that I liked, I tied the stems with a bit of twine before adding them to my vase.

Above: I allowed the wispier stems to peek haphazardly from the top of bouquet in the same way that tall grasses rise above the daisies in the meadow.

Would you like to sow your own meadow muddle?  A Northern Lights Mix has 14 kinds of flowers, including shasta daisies; a packet of 650 seeds is $3.45 from Johnny’s Seeds.

Here’s the finished arrangement. It’s not perfectly groomed, but like the meadow that the flowers came from, some things are better left a little wild.

Is there a lawn care debate brewing in your household? Consider our 5 Favorite Lawn Substitutes.
For more of our easy floral arrangements, see our Bouquet of the Week posts.

Forget Me Not Seeds

Squirrel Vs. Garden: Why I Made Mint Sauce