Andy Sturgeon never looks miserable, and he frequently collects prizes. This year, his “captured landscape” for the Telegraph won Best in Show this week at the annual Chelsea Flower Show, as did his previous Chelsea show garden. What are his medal-winning secrets? 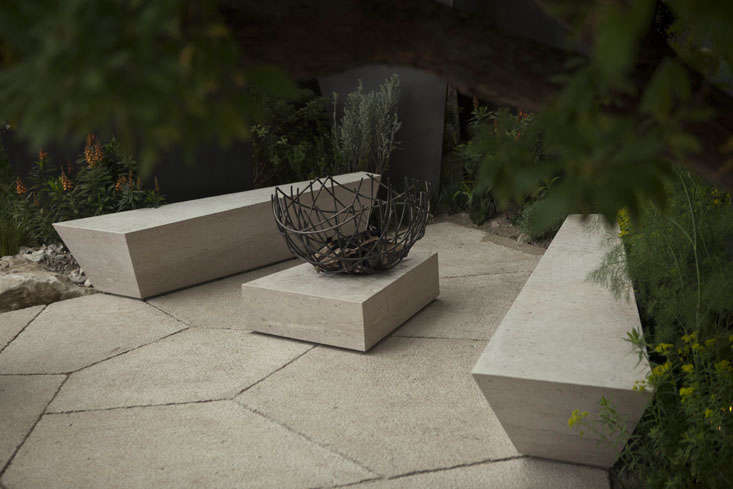 Above: Monolithic slabs, a primal fire bowl. The fossil-rich limestone paving is sourced from Portugal, dating from the Jurassic period. Andy’s design for the Telegraph began with cardboard and scissors, cutting out the shape of a stegosaurus at home. His sculptural ideas tend to present themselves first, followed by planting. The fire bowl was made by James Price. 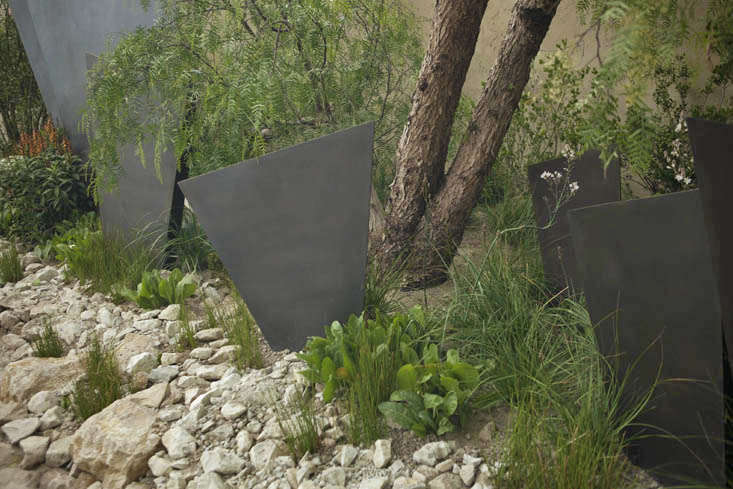 Above: The backbone of this garden is literally based on the spinal fins of a dinosaur, with shards of bronze-coated steel disrupting the long straight line of a Chelsea show garden rectangle. 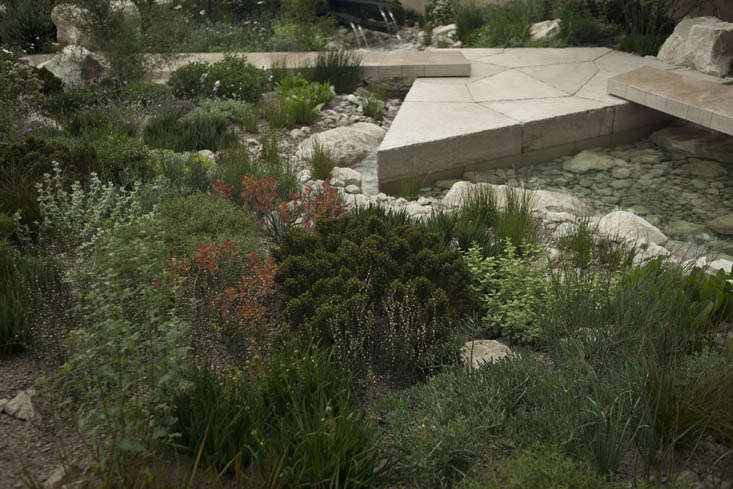 Above: The garden has an uncompromising sense of direction, the mise-en-scène beginning at the corner where most of the crowds gather, and marching directly into the center with its shallow water and pale bridges. 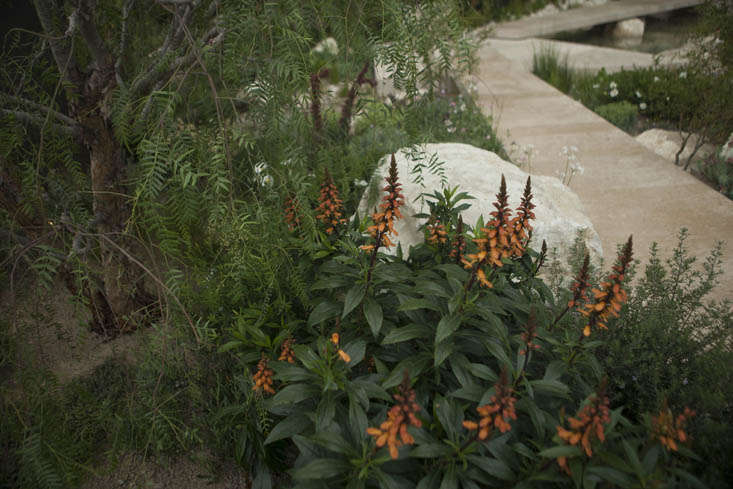 Above: Part of Andy Sturgeon’s gift is to combine various stories and still make a strong narrative. Like several other show gardens this year, there is a preoccupation with Mediterranean-style conditions for plants, though this garden is not based on a particular landscape. Communities of plants are used which thrive in the same parched conditions, whether they originate from southern Europe or the Southern Hemisphere. Shown here, the half-hardy perennial Digitalis canariensis with an evergreen tree that likes dry and rocky: Schinus molle. 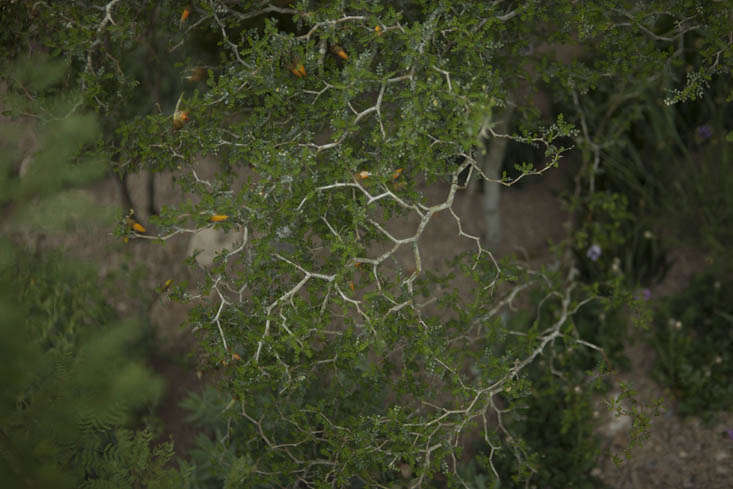 Above: Just as Andy’s structural shapes can be uncompromising, so too are his plant selections, with intriguing but not conventionally beautiful drought survivors such as this Sarcopoterium spinosum. I suspect that this is one of the reasons why show judges (the world over) like him; he is interested in a different kind of beauty. 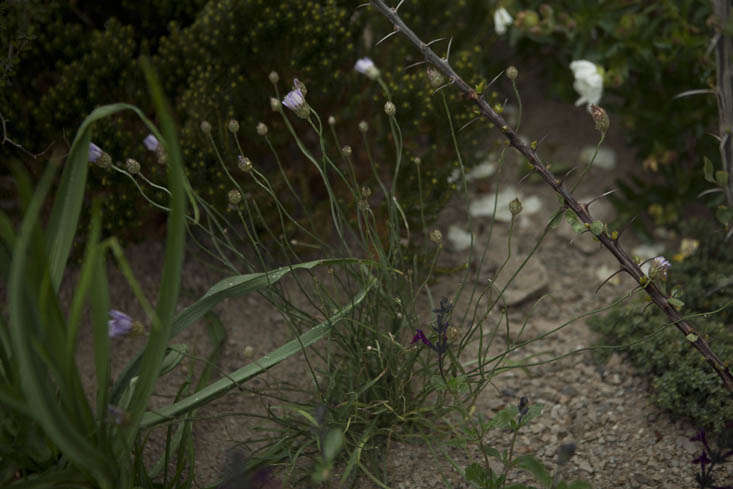 Above: Sturgeon is the first to admit that his inspiration can come from anywhere but horticulture. Sculpture, for instance, can dictate how a person moves around a space and the same can be said of plants that are spiky and wiry, (including pale blue Catananche caerulea ‘Tizi n Test’ shown above). They spring out of rough terrain that is not a path exactly and neither is it a flowerbed. 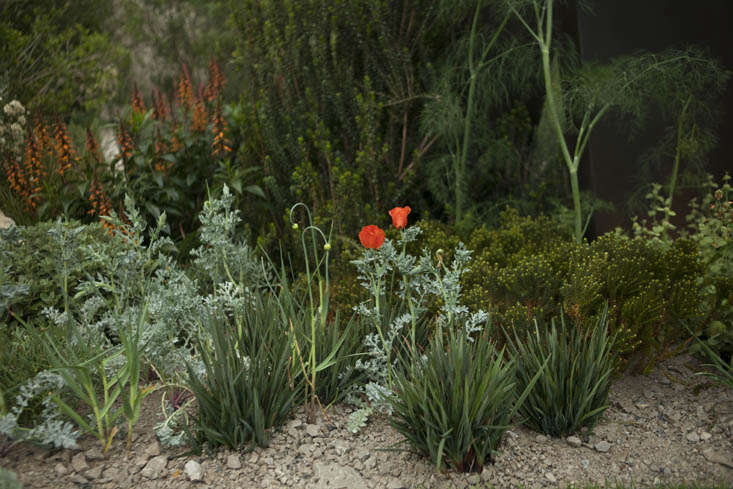 Above: Although there is rich color in this garden, it is really about green, silver-green and blue-green. And most of all, leaf-shape. The plants may have been cosseted in the process of making them show-worthy, yet there is none of the floppy luxuriance that is more familiar in the artifice of a show garden. 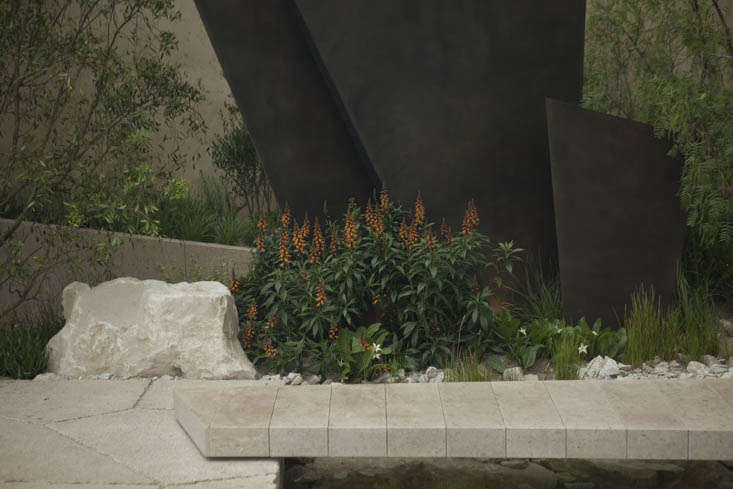 Above: A garden with yin as well as yang. Grit is no fun without smooth elegance; prehistoric shapes have a reassuring modernity; the flicker of an outdoor fire is within babbling distance of a brook. All these things give Andy Sturgeon’s gardens a certain something in perfecting a composition: artists, like my father, sometimes call it “gestalt.”

Väkst: A Greenhouse Restaurant in Copenhagen

In collaboration with: Casper's Perfect Mattress (with a Gardenista Reader Discount)

5 Flowers to Grow for a Starter Natural Dyes Garden