Buffalo is a city with a reputation for cold. But while winter snowfalls—averaging nearly eight feet a year—seem punitive to plants,  hardy shrubs and perennials are fine. They need to be dormant. It’s the gardeners who suffer, itching for green while snow seals their city. Buffalo gardeners burst out of the gates in spring like horses heading for home. Tender annuals started indoors from seed are planted out. Tropical tubers overwintered in basement pots are moved up into the sun. Thousands of spring bulbs explode on sidewalks. And while winter seems long, the growing season’s northern days are longer. In Buffalo, plants grow fast.

Every year, over the last weekend in July, the city of Buffalo opens its doors and its gardens to neighbors and out-of-town visitors, hosting the biggest free open garden event in the United States. Garden Walk Buffalo showcases more than 400 gardens, a phenomenon that attracts upwards of 65,000 visitors over two days. Recently I visited Buffalo’s green streets and got a taste of gardening, Buffalo-style. Here are eleven ideas to steal from the city’s gardens: 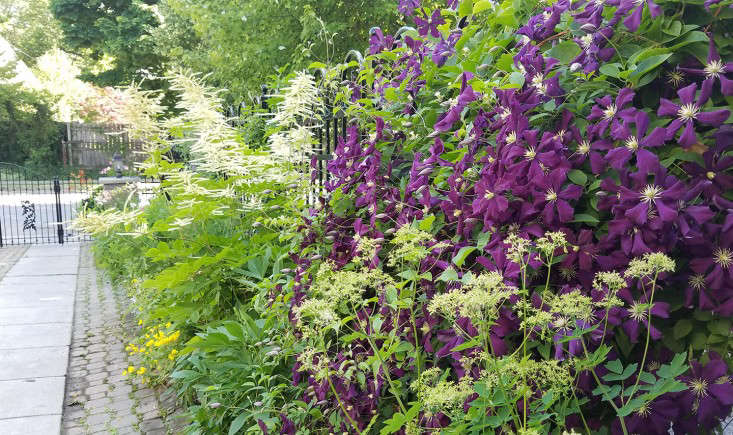 Above: In a narrow strip between pavers and fence beside her driveway on West Delavan Avenue, Jennifer Guercio grows irrepressible Clematis jackmannii, goatsbeard (Aruncus dioicus), and a meadow rue (a Thalictrum species) which “withstand harsh weather and many feet of snow,” right beside the driveway. Surviving severe cold as well as the insults of salt and ice are standard requirements for plants this close to a working driveway in city famous for long winters (its USDA plant hardiness zone hovers around 6a). 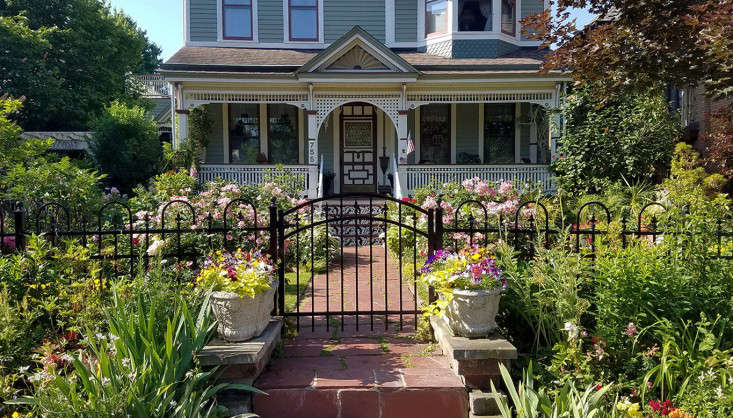 Above: Jennifer Guercio’s garden does not stop at the fence but spills over abundantly, inviting the garden visit to begin before the gate has been opened. 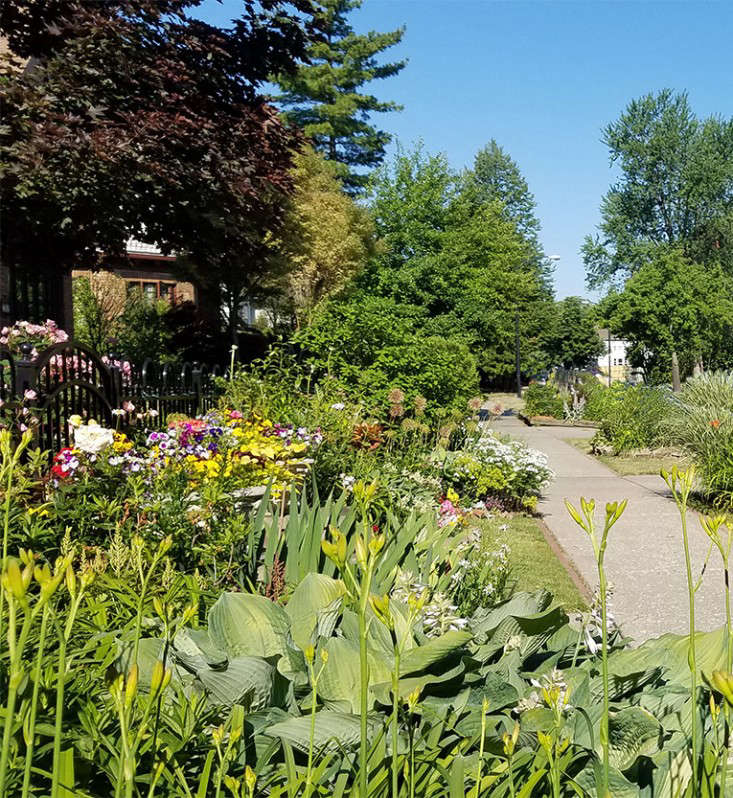 Above: Like many Buffalo gardeners, Jennifer takes the garden to the hell strip, the compromised sliver of earth between sidewalk and street. Here daylilies crowd the overstuffed beds, along with the flowering equivalent of an all-you-can eat buffet of perennials and annuals. 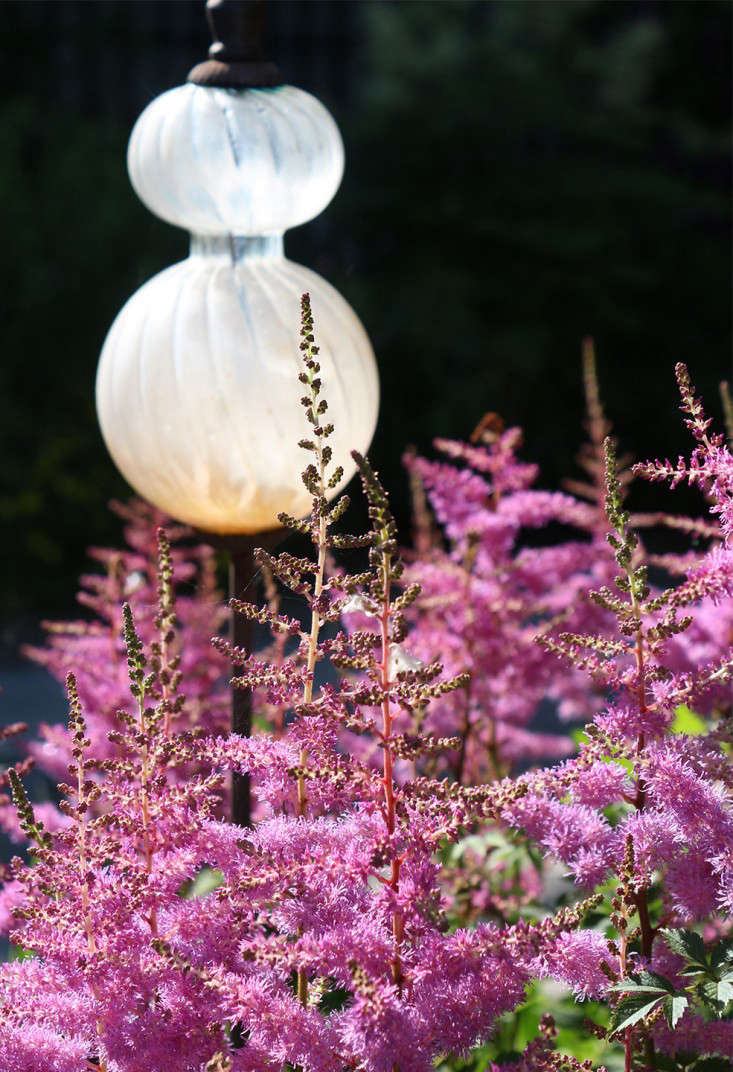 Above: It is a rare Buffalo garden that is without art, ornament, or statuary of some kind. Beside intricately painted Victorian homes, eccentric combinations and found objects have come to define Buffalo style. Jennifer changes her decorations as often as she switches out plants, and in her midsummer garden a frosted hourglass is a voluptuous companion for the upright feathery plumes of pink astilbe. 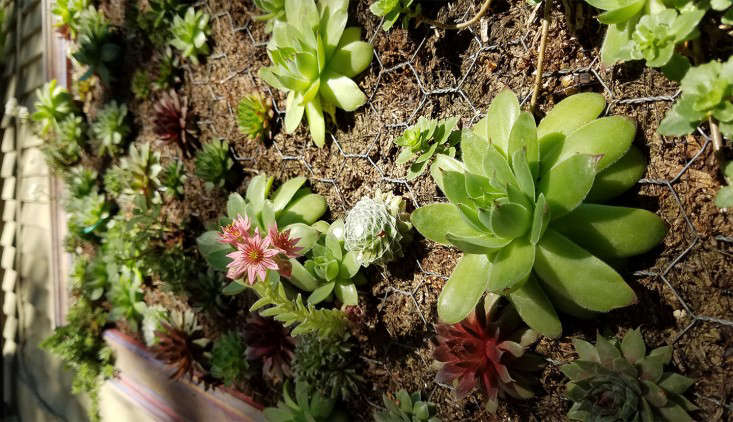 Above: Jim Charlier, a moving force behind the garden walk since the early days (“Jim is Garden Walk Buffalo,” says Mike Shadrack, a former British bobby, current Buffalonian and author of The Color Encyclopedia of Hostas) reckons that Buffalonians will hang anything on a wall. In a substantial wooden picture frame he has planted a collection of sedums and Sempervivum in moss. They overwinter in place, covered in canvas.

Start with One Plant 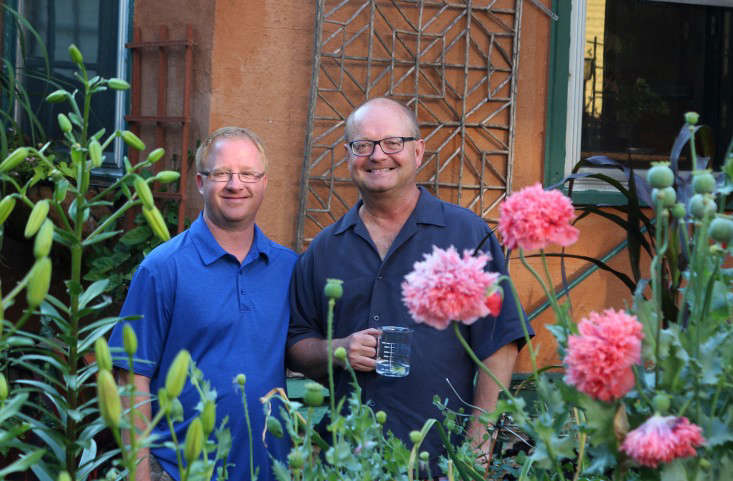 Above: Visitors to the Bird Avenue garden of Brian Olinski (at Left) and his husband, Gordon Ballard, often leave with a castor bean plant, or with the cannas and datura flourishing in pots in the car-less driveway. Brian tends this ad hoc nursery and his advice for new gardeners who love the wild variety of plants in this garden but don’t know where to begin is to “find a plant that you like. Start with one plant.” For him that plant is the castor bean (Ricinus communis), whose humble early summer beginnings bely its roof-height by the end of the growing season. The couple’s garden is an unofficial stop on Garden Walk Buffalo; having items for sale is not allowed. But the self-described irreverent gardeners draw streams of visitors and cheekily throw an after party whose invitations are sought-after, post garden walk. 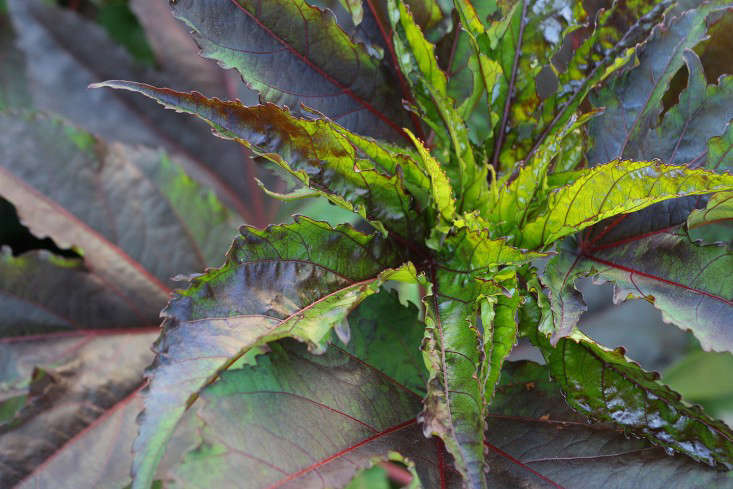 Above: In reaction to winter and despite a shorter growing season than most other parts of the country, Buffalonians embrace plants with big, colorful leaves and tropical aspirations. In Gordon and Brian’s garden hardy Hibiscus ‘Summer Storm’ grows massively in a single season, producing dinner plate-sized flowers from late summer through fall. 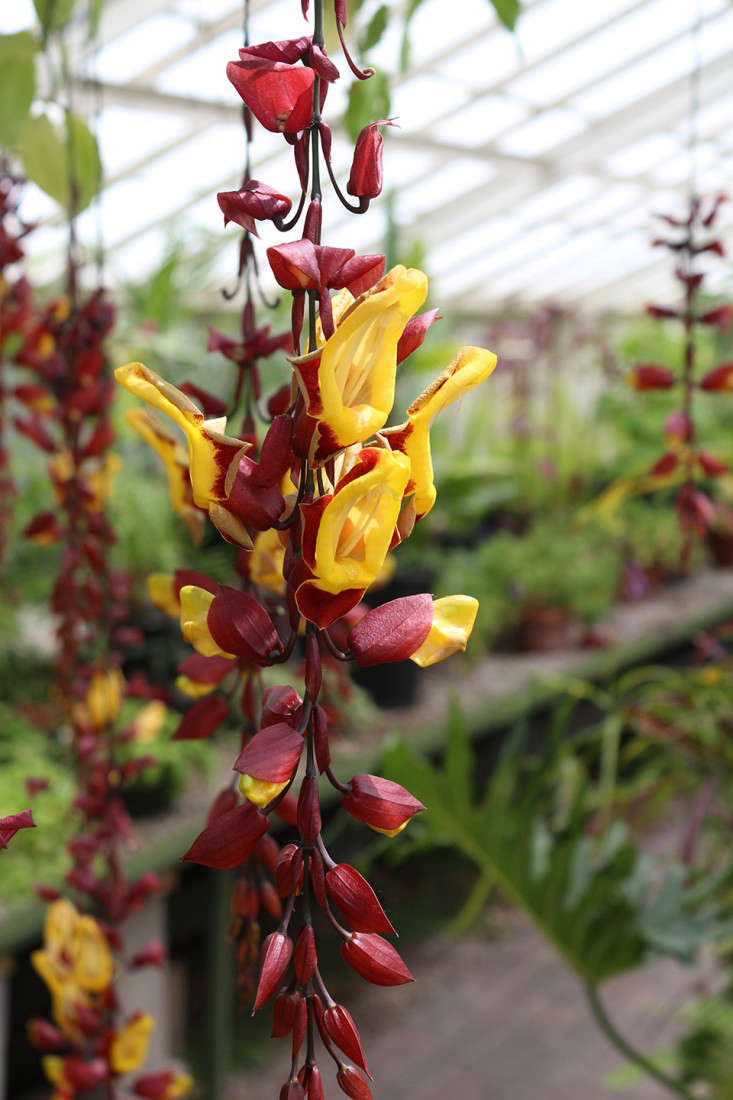 Above: The toasty glass houses of the Buffalo Botanic Garden offer a tropical getaway during short days and long nights. The flowers of an exotic Indian clock vine (Thunbergia mysorensis) drop deliciously from an overhead trellis. In USDA zones that freeze, grow this unusual tropical vine indoors in a very bright sun room, or plant it outside in zones 10 and higher. 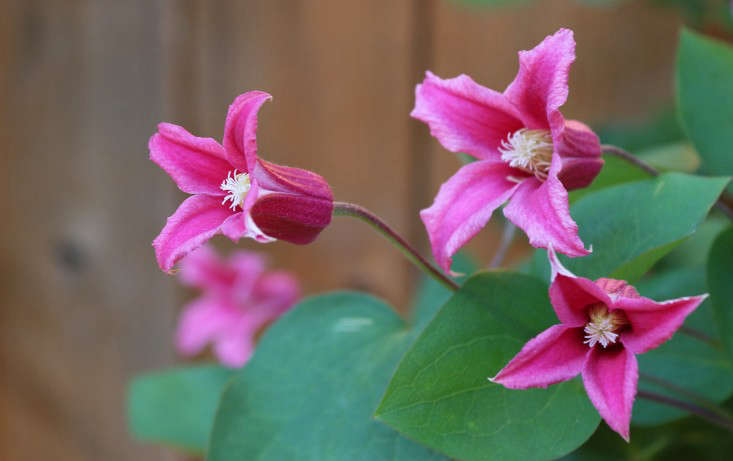 Above: In bloom all over the city, the elegantly dainty, tulip-shaped flowers of Clematis texensis ‘Princess Diana’ prove that Clematis do not have to be loud and large. ‘Princess Diana’ is also a re-bloomer, with its main flush in midsummer followed by a lighter bloom—if you cut it back after its first flush—in early fall. 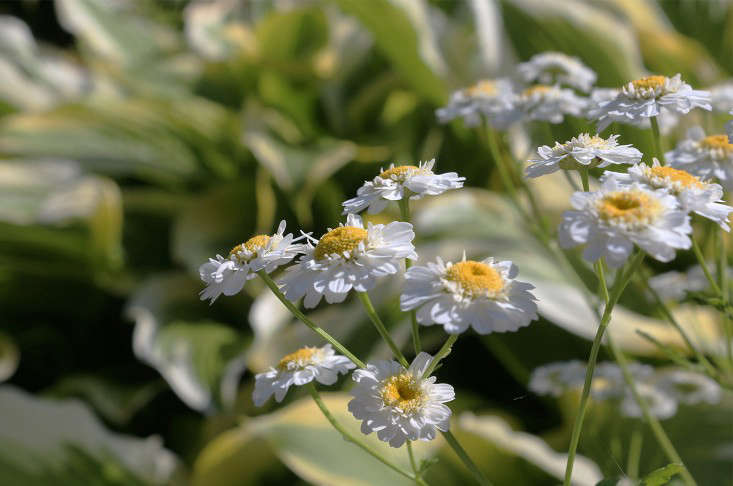 Above: Garden Walk Buffalo is famous for mingling neighbors and strangers, and in Jennifer Guercio’s garden this is reflected in some of the unexpected plant pairings. Full-sun feverfew meets shade-loving hostas. Blame That Storm. In October 2006, when the trees of Buffalo were fully leafed, a freak snowstorm decimated over 30,000 of them. In Jennifer’s garden two pines crashed down, transforming dappled shade to full sun, overnight. Vestiges of the shade garden remain with their new planting companions, and nobody is complaining. 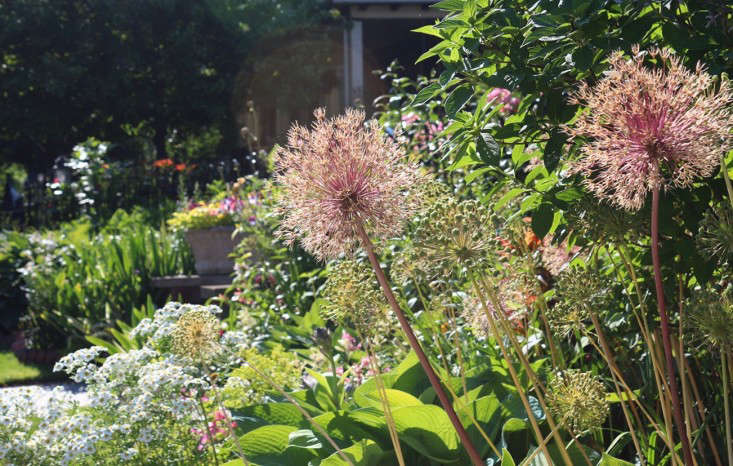 Above: Don’t deadhead the alliums when they are past bloom. The seedheads of spent alliums last for many weeks, are structurally effective in mixed borders, and extend this summer bulb’s season of interest. 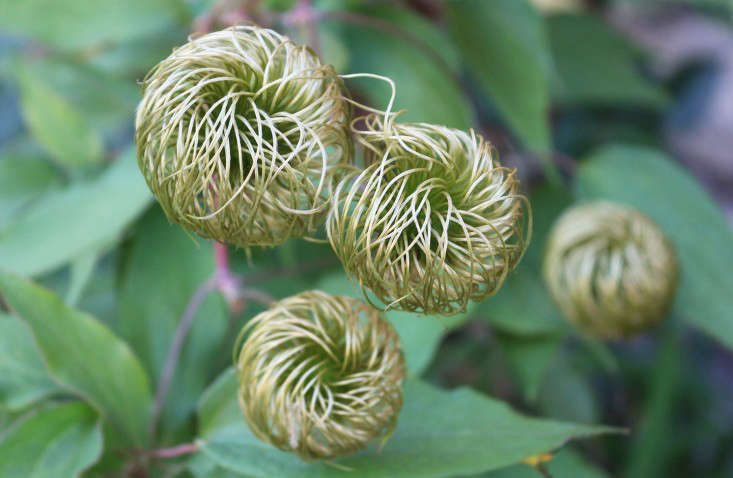 Above: The whorled seedheads of Clematis ‘Liberation’ are like silky toupees from the ’70s. 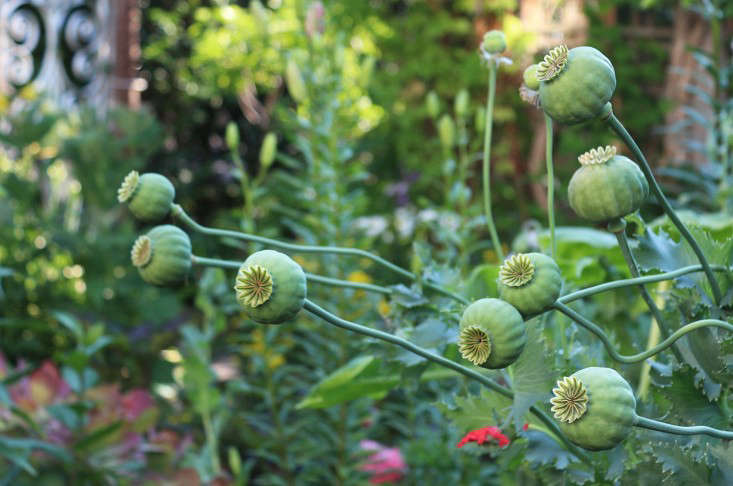 Above: The seedpods of opium poppies (Papaver somniferum) add months of drama to Gordon and Brian’s garden, long after the blowsy flowers have dropped their petals. 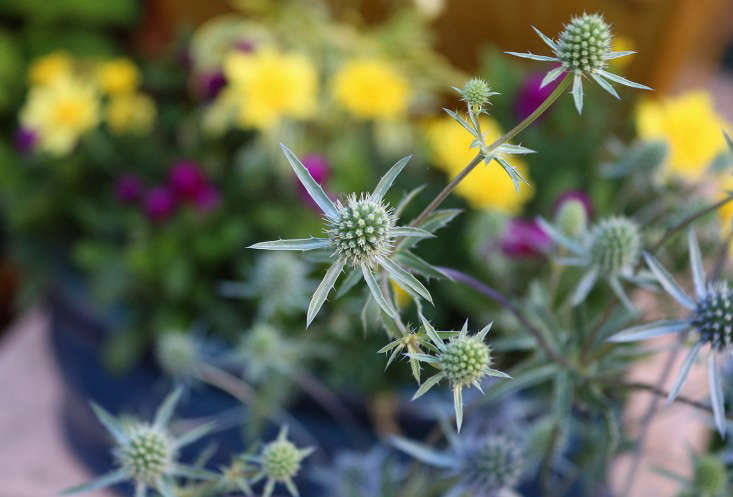 Above: Blue sea holly (Eryngium planum)’s raison d’être is the spiny skeleton of bracts that remain for months after the tiny petals have fallen away.

The next Garden Walk Buffalo is over the weekend of July 30th and 31st and is preceded by weekly open gardens held every Thursday and Friday. There are no criteria for homeowners to meet—any garden can be listed, whether it contains one row of red begonias or a full-blown northern New York cottage extravaganza overflowing with hundreds of high maintenance perennials. You’ll see it all.

The Color Encyclopedia of Hostas