Once, lawns were cut with scythes and the results weren’t bad; Versailles for instance was cut that way. While progress has brought a shorter sward, grass cutting has not become more enjoyable. It’s a chore like vacuuming, and strictly speaking, ear plugs should be worn.

A quick look through The Scything Handbook (scheduled to be released next month in the US) leaves us in no doubt that using a scythe is not only a different way to trim, but a new way of life. The author, Ian Miller, does say early on: “There’s no substitute for observing an experienced practitioner,” so, taking him at his word, we are off to East Anglia to observe: 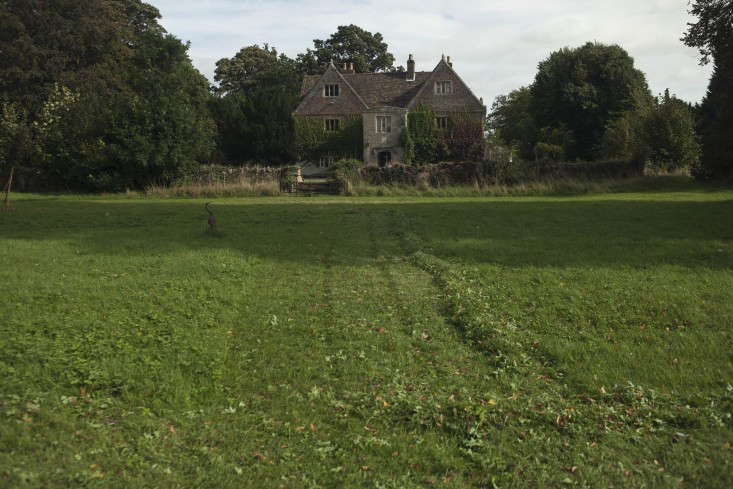 Above: Lovells Hall in Norfolk, built in 1543 for Sir Thomas Lovell, Chancellor of the Exchequer to Henry VIII. The current tenant of Lovells Hall is our experienced practitioner Richard Brown, manager of Emorsgate Seeds. Supplying wild flower and wild grass seeds to Prince Charles among other people, Richard’s farm grows industrial amounts of cowslips, ragged robin, and dog violets. The meadow on the other side of his driveway is a personal project. In autumn it looks like a lawn. 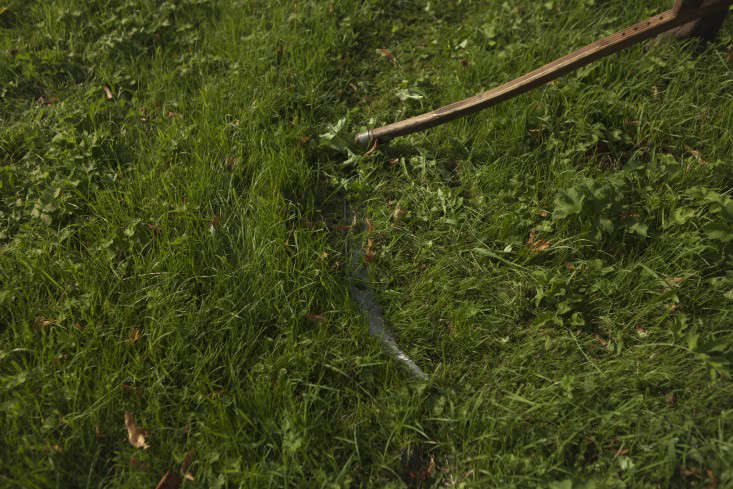 Above: Watching and hearing Richard scythe is a powerful argument in its favor, each swing accompanied by a seductive sound of swooshing, as grass blades are quietly sliced.

The wild flowers have already been cut (in August), after they set seed. This is not a ‘flower bolognese’ as he calls the colorful meadows bought in packets and sown over bare ground. It is an area of native grass including the kinds of flowers that would be found within that, if they had not been killed off by the herbicides used by a previous owner. He is restoring it by adding plants like lady’s bedstraw and plantain as plugs or seeds, to areas of bare earth. These are sometimes created by moles. 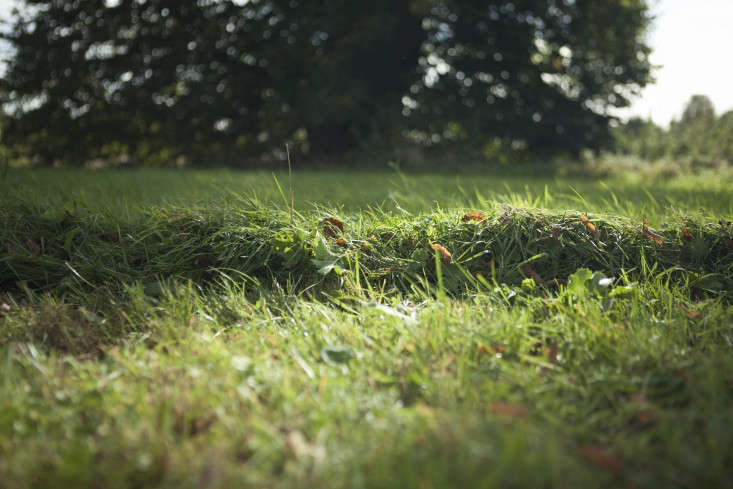 Above: Because of mole hills and other disturbances, the ground is smoothed with a roller in spring, before scything begins. Richard’s meadow backs on to a farmed field (not his) and the soil is not as poor as he’d like. It also spawns hog weed seedlings, which can only be kept at bay by frequently cutting off their leaves. When the grass is the right length, new weed seedlings are easily lopped off by the swinging action of the scythe, which leaves the grass intact. 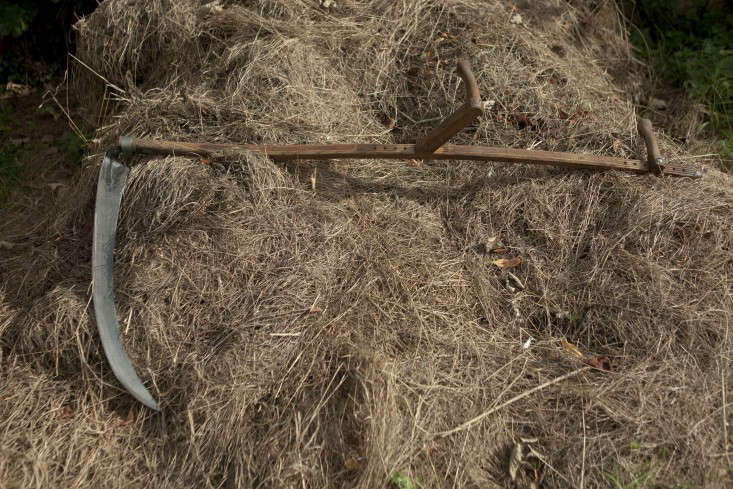 Above: An Austrian scythe, lighter, smaller and far more popular than the English scythe.

Scythes carry out more jobs (like weeding) than mowers. The original lawnmowers were invented in the 19th century, pulled along by a donkey or pony. The animal wore  large leather clogs, to avoid footprints. Motors meant goodbye to animals and hello to a lot of noise and fumes. Prolonged use of strimmers can cause hip strain and ear damage, its indiscriminate cutter whacking everything in sight, including trees. 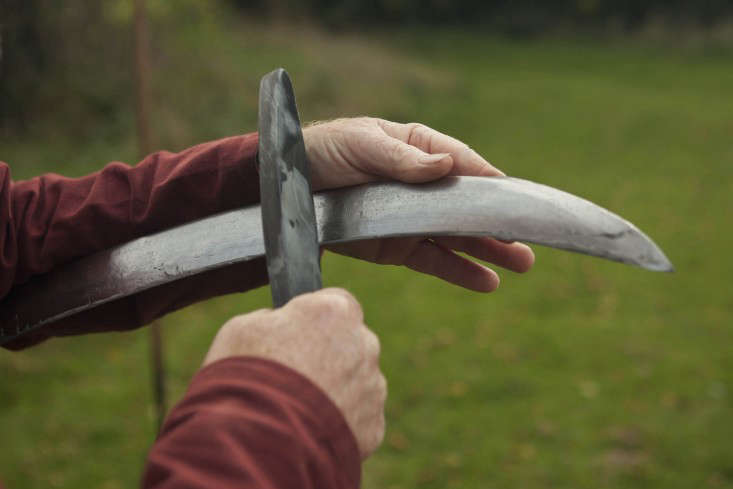 Above: Before beginning, Richard sharpens his blade with a whetstone. This is repeated throughout the act of mowing, about every five minutes in fact. It should be said that after five minutes, about 30 feet of grass has been cut and though he makes it look easy, a rest is not a bad idea.

As in sourdough bread making, the slow aspect of scything needs to be embraced otherwise it just won’t work. Not wishing to put anyone off: the blade also needs to be peened every now and then. In other words, hammered back into shape. 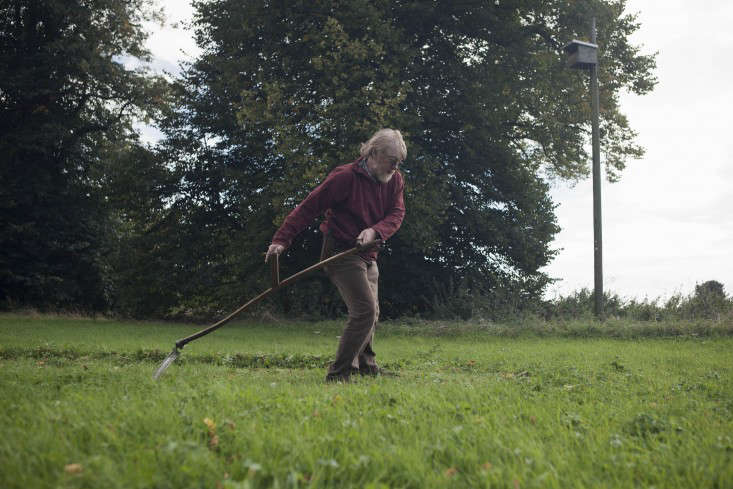 Above: Scything is fantastic exercise for the core muscles and makes a good accompaniment to the Alexander Technique or Pilates. All of which is covered in the book, along with Mindfulness-Based Stress Reduction. It’s all relevant, as is the information on haymaking and growing grains (for sourdough bread, of course). 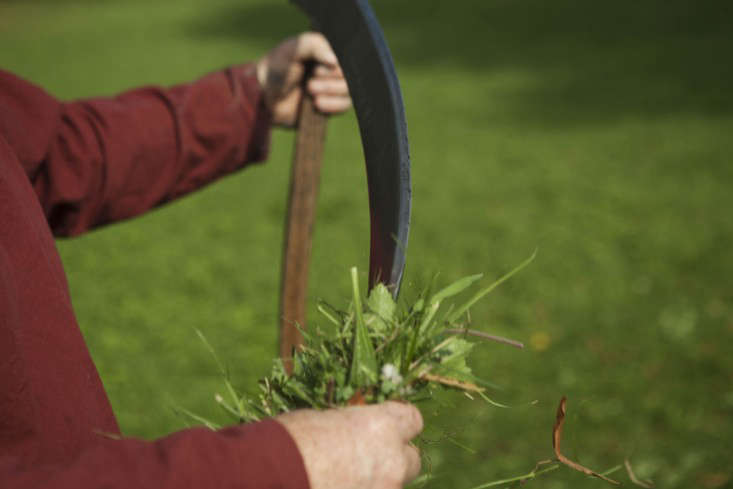 Above: When scything, grass is cut in a semi-circle. At the end of a session (and it’s perfectly all right to tackle just one section of a lawn or meadow at a time), the blade is cleaned with newly cut grass. Oil-free grass lies in rows, ready to be raked and used for animal feed, mulch, or compost. 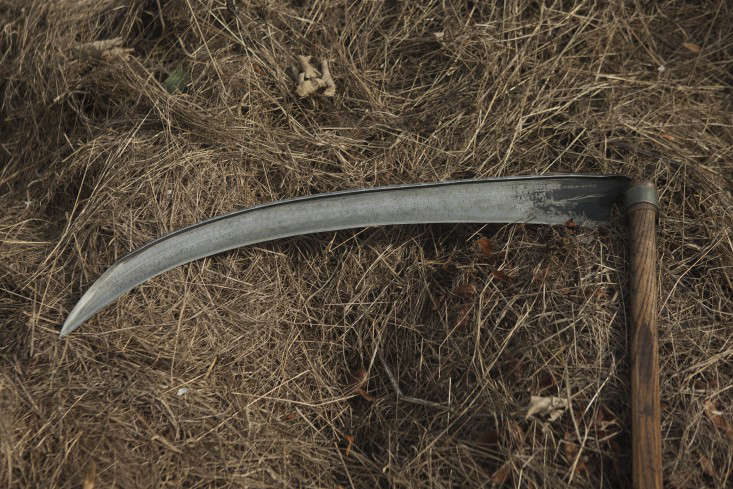 Above: The very sharp and slightly scary blade used by Richard Brown. He says that specialists would have handled the English scythe because of its weight, but the Austrian version was developed so that anybody milking a cow (often female) could cut a small amount of dew-laden grass in the morning before milking. 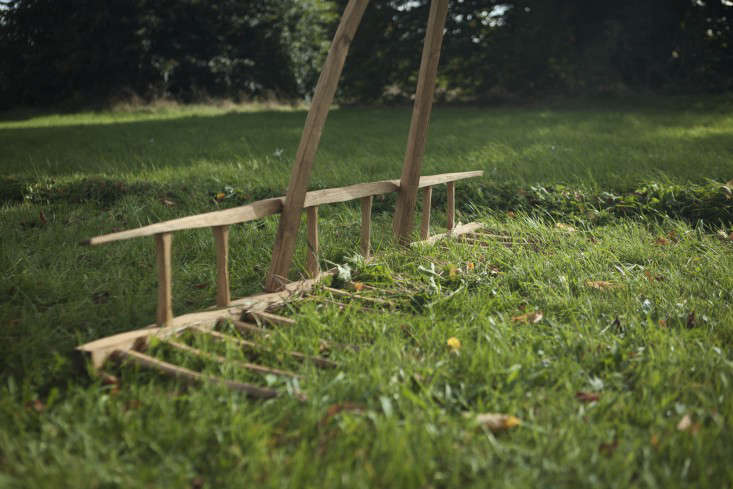 Above: Richard’s rake, which he made himself from the wood of an ash tree. It is five feet wide, which he finds efficient for gathering the pristine rows of unpolluted grass. 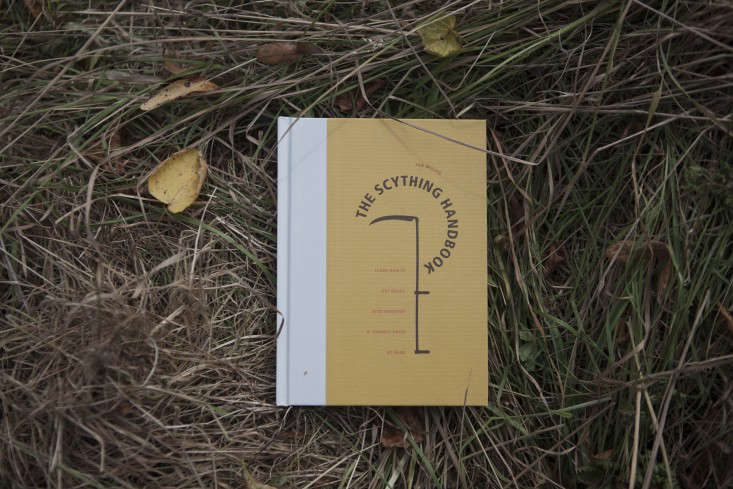 Above: The fascinating The Scything Handbook begins with a quote from Leo Tolstoy, on scything with the peasants: “These were the blissful moments.” It is available now in the UK for £13.48, or, in the US, to pre-order on Amazon for $18.58.

10 Garden Ideas to Steal from Transylvania, for Halloween and Beyond

Can This Garden Be Saved: I Don’t Like Mowing Around Trees