From the street, the property on Jamaica’s west coast looked raw and forbidding, with a barbed wire fence that didn’t stop anyone from using it as a dumpsite. But LA-based designer Sean Knibb, who had grown up on the island, saw the possibilities: “When we saw it from the ocean, it was beautiful.”

Knibb agreed to design a second home on the land for a dear friend of his, whose original idea was to build a traditional two-story great house. But after the client took a trip to India and visited Mahatma Gandhi’s home, the plan changed. “She came back and said, let’s make it lighter and more about individual moments, and spread the rooms of the great house over the property,” says Knibb.

The result is a charming family camp, connected by pathways through the natural vegetation on the four-acre property. For Knibb, who grew up in Jamaica, the natural landscape “seemed like heaven” and so he kept the plant palette simple: “shades of green, and textures of green, with a touch of red.” 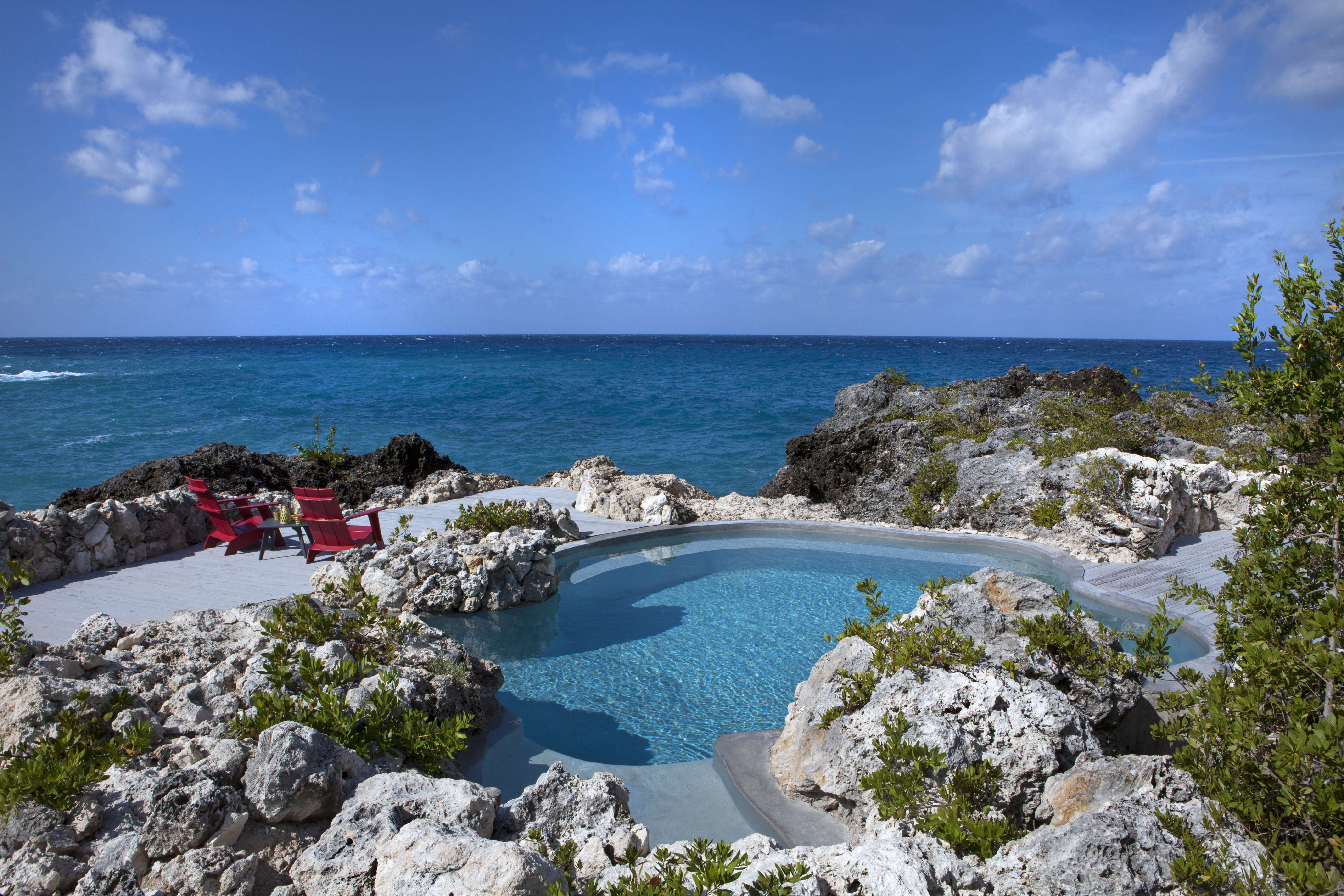 Above: “We found a hole in the rock and cemented it in to make the swimming pool,” says Knibb. “The shape of the pool was the natural shape that was there.”

Instead of one large house on the property, a family compound of seven small buildings —including three main cottages, a gardener’s cottage, and a communal kitchen—fits into the contours of the land naturally. “The idea was to engulf the structures with the landscape and not to touch the coastline whatsoever,” says Knibb. 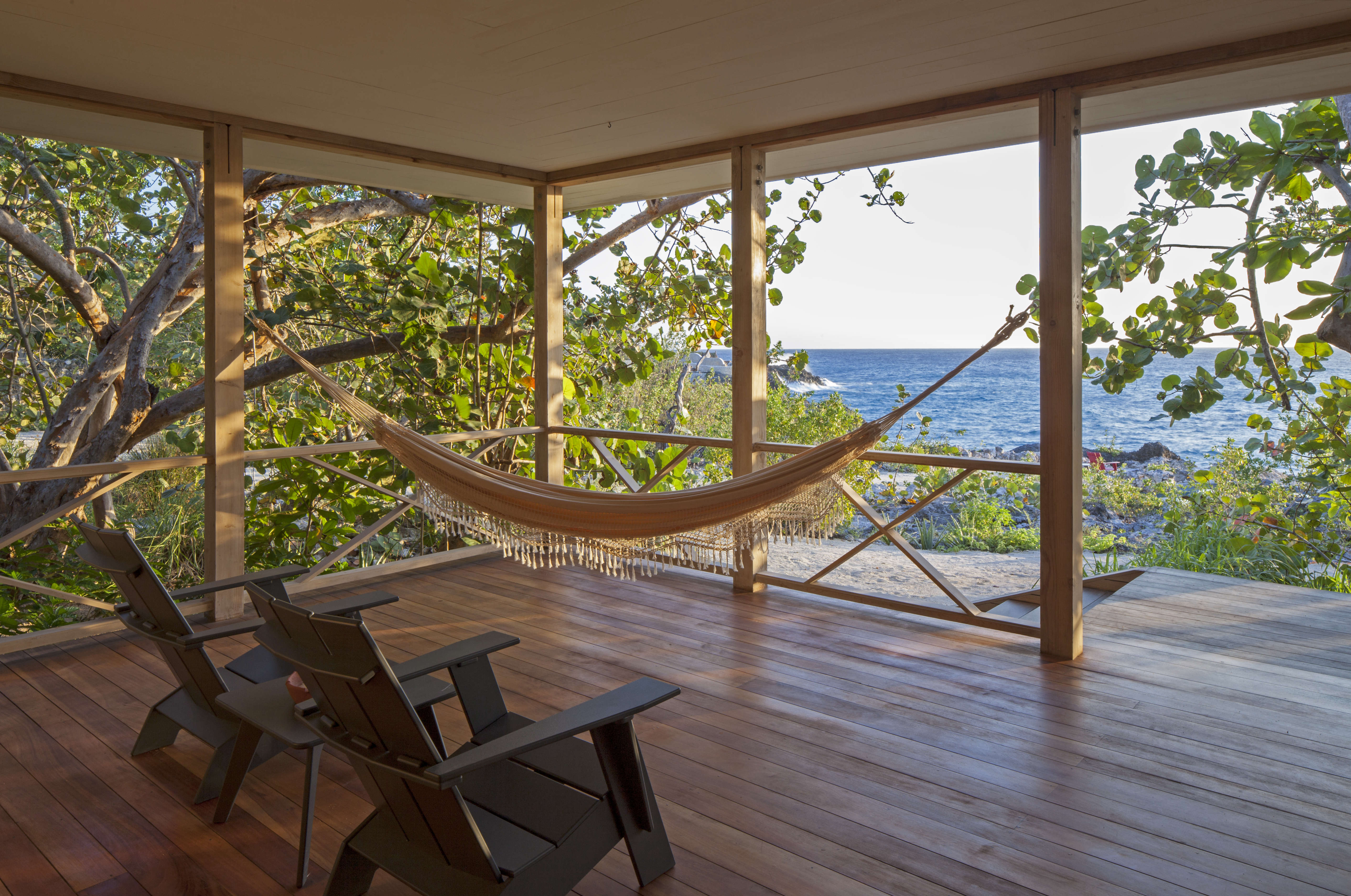 Above: Three guesthouses, each designed with a particular family member in mind, have bedrooms, outdoor showers, and covered porches. 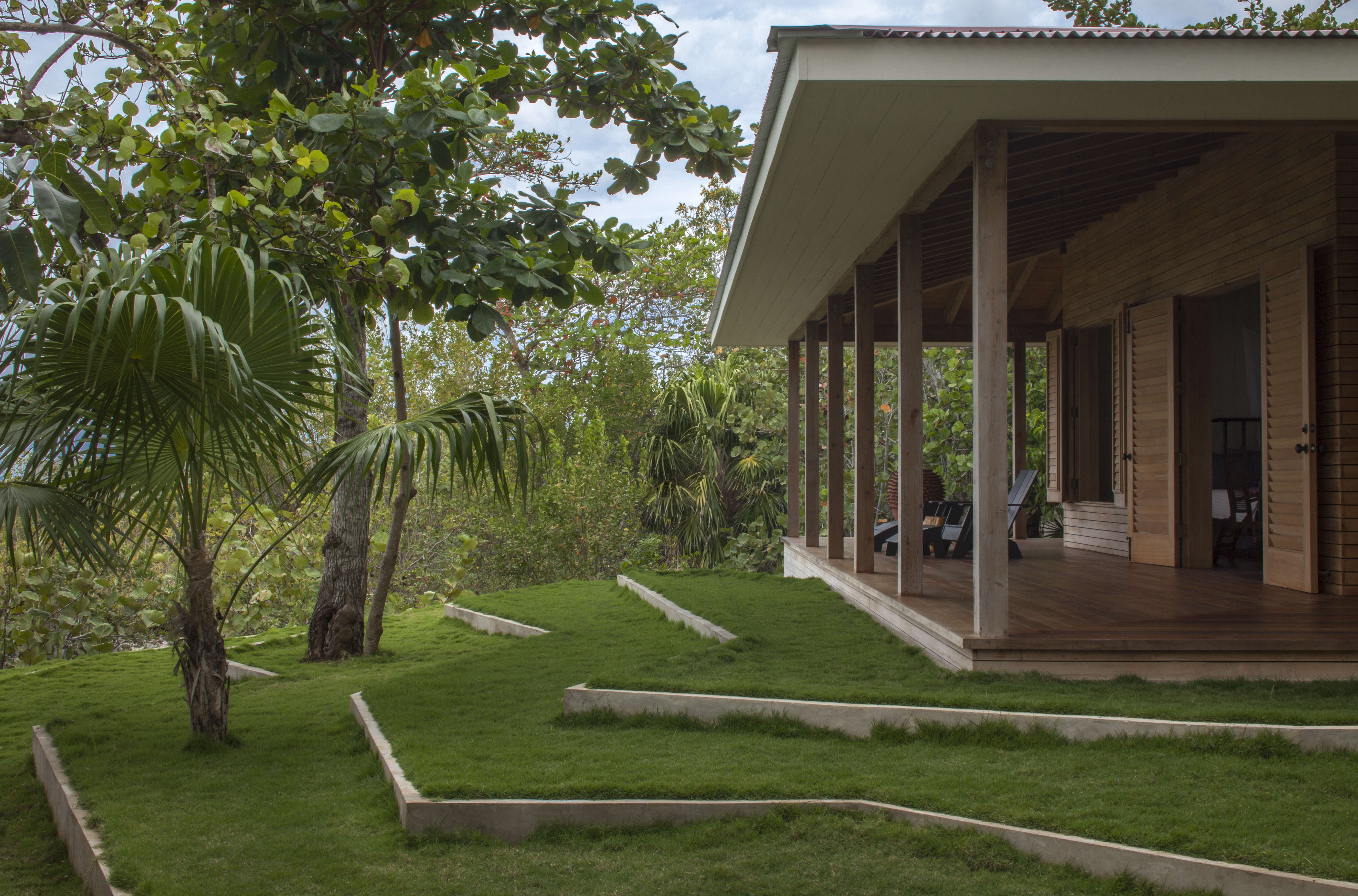 Above: “This is ‘His’ cottage, with a gently undulating staircase that wraps like waves around the contours of the land,” says Knibb. Constructed of low concrete risers filled with soil, the stairway’s treads are planted with a carpet of crabgrass. 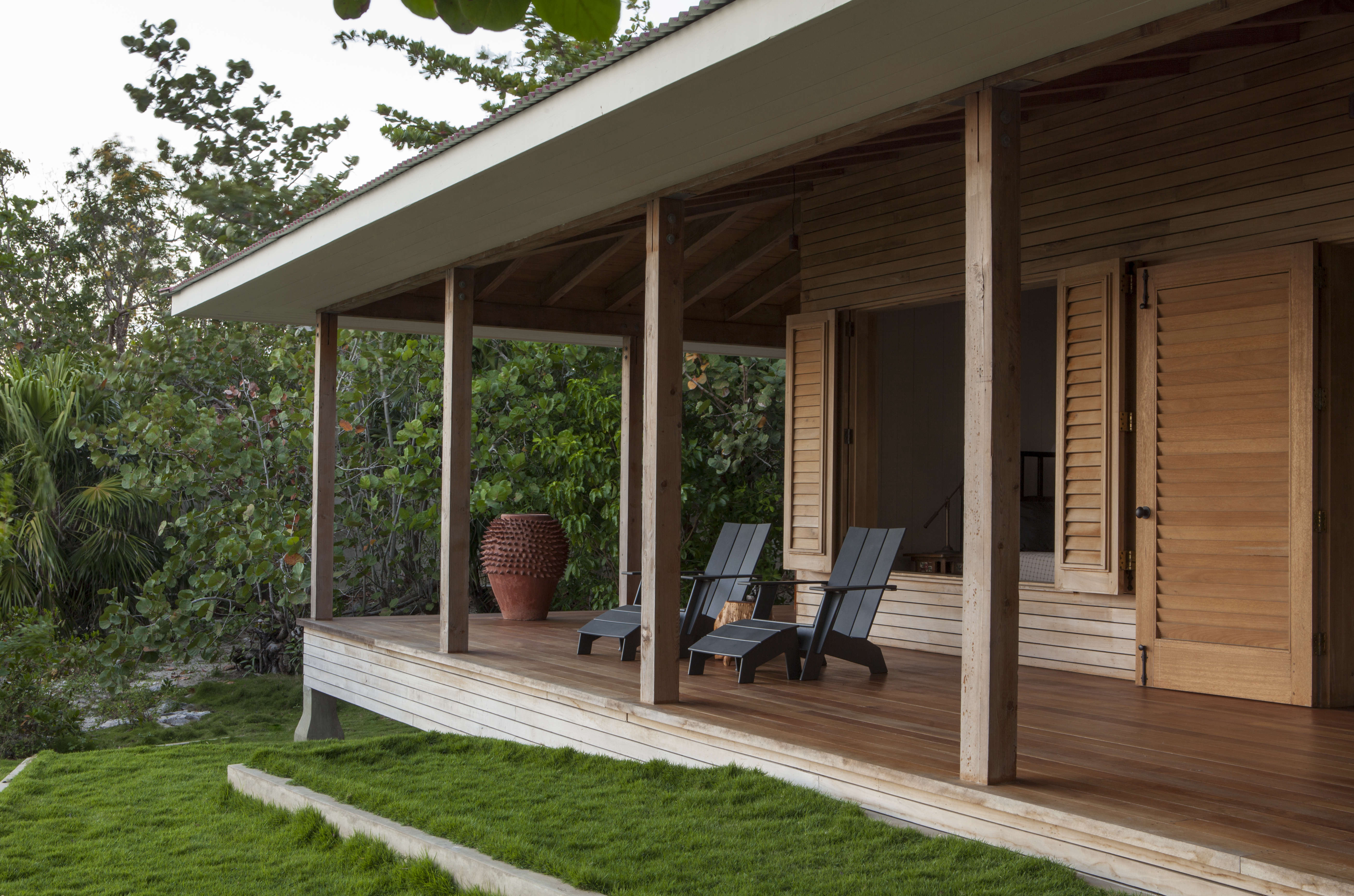 Above: The buildings are sided with indigenous cedar, which typically is not considered durable enough to stand up to the elements. But in this case, “I designed the roofs with deep overhangs so sun would never hit the side of the buildings,” says Knibb. “That helps with longevity and maintenance and made it possible for us to use the cedar wood.” 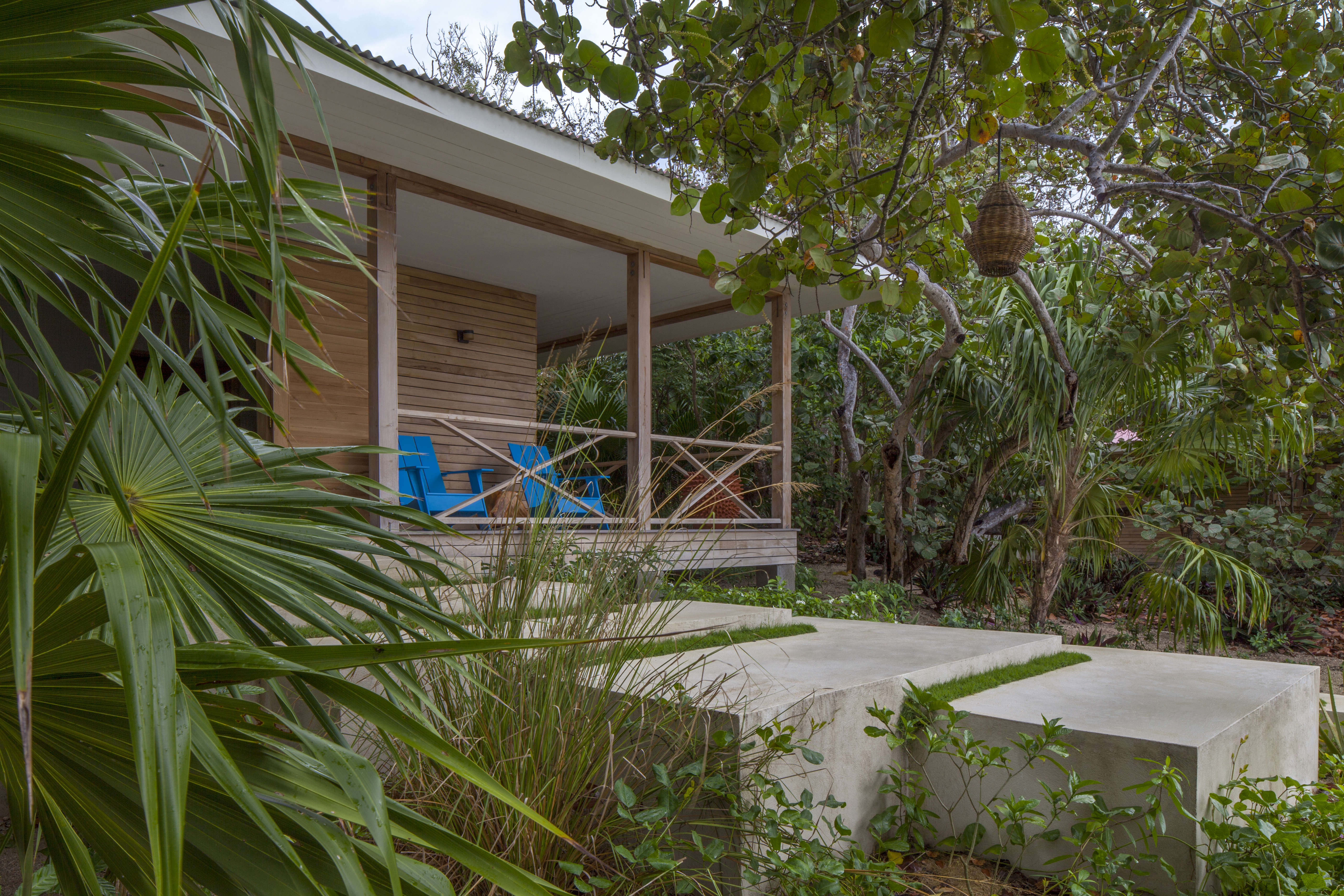 Above: Both “His” and “Hers” cottage face the water, with deep, shaded sitting porches where you can pass the afternoon enjoying the view. 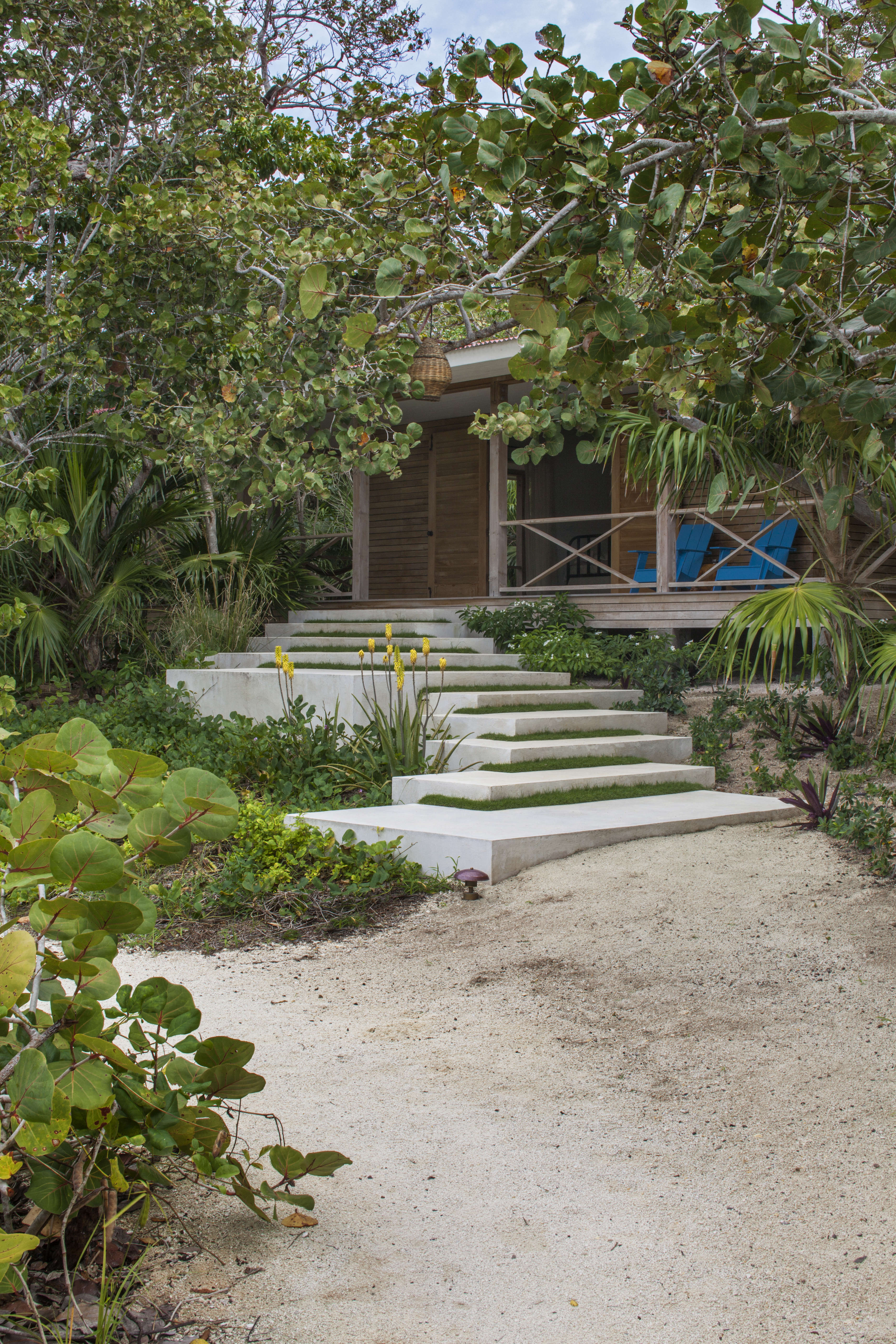 Above: The entry staircase was built of square concrete blocks and designed to help mitigate storm damage. If waves crash, the stairs act as a buffer against water. 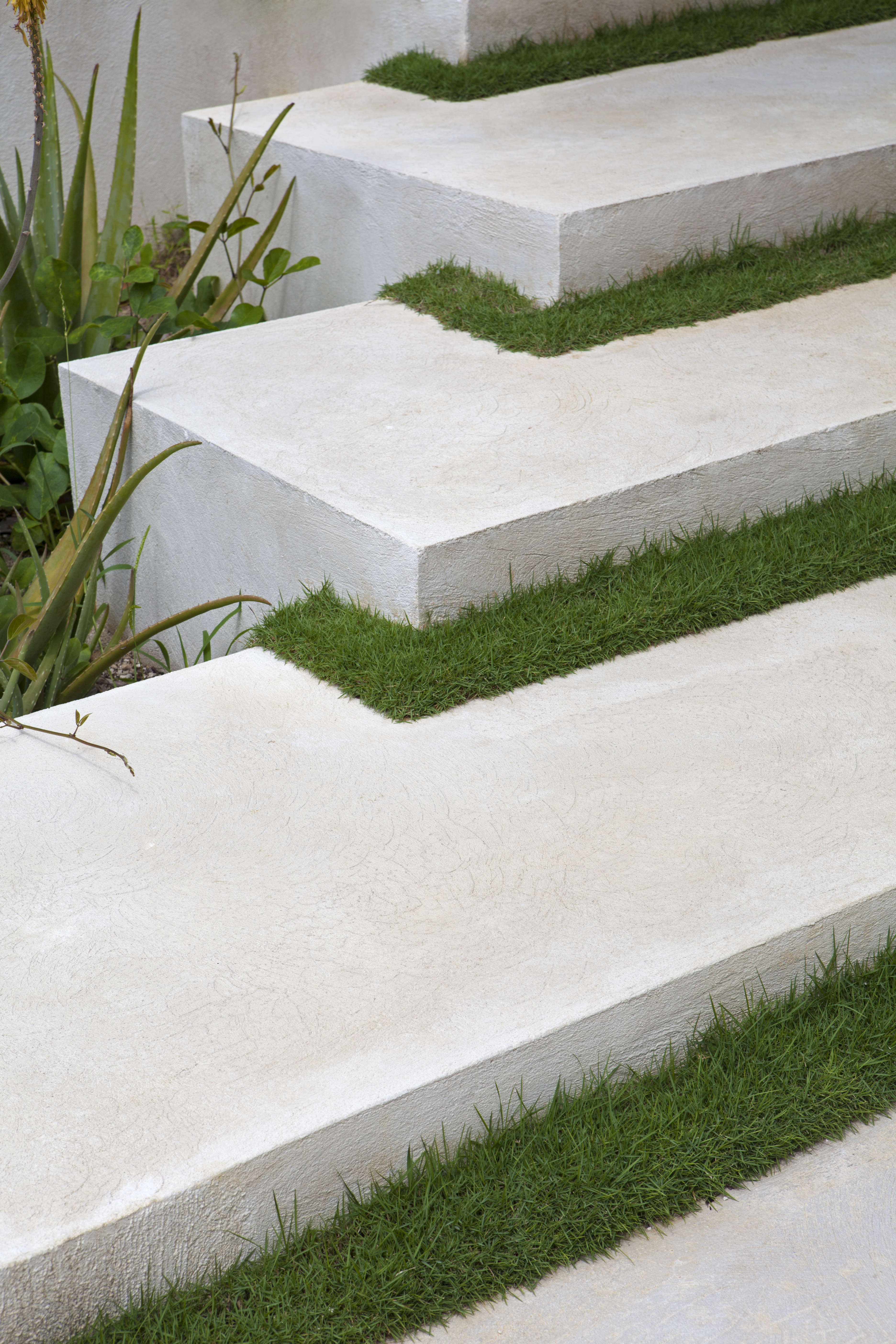 Above: Between the concrete blocks is filler soil, planted with crab grass. 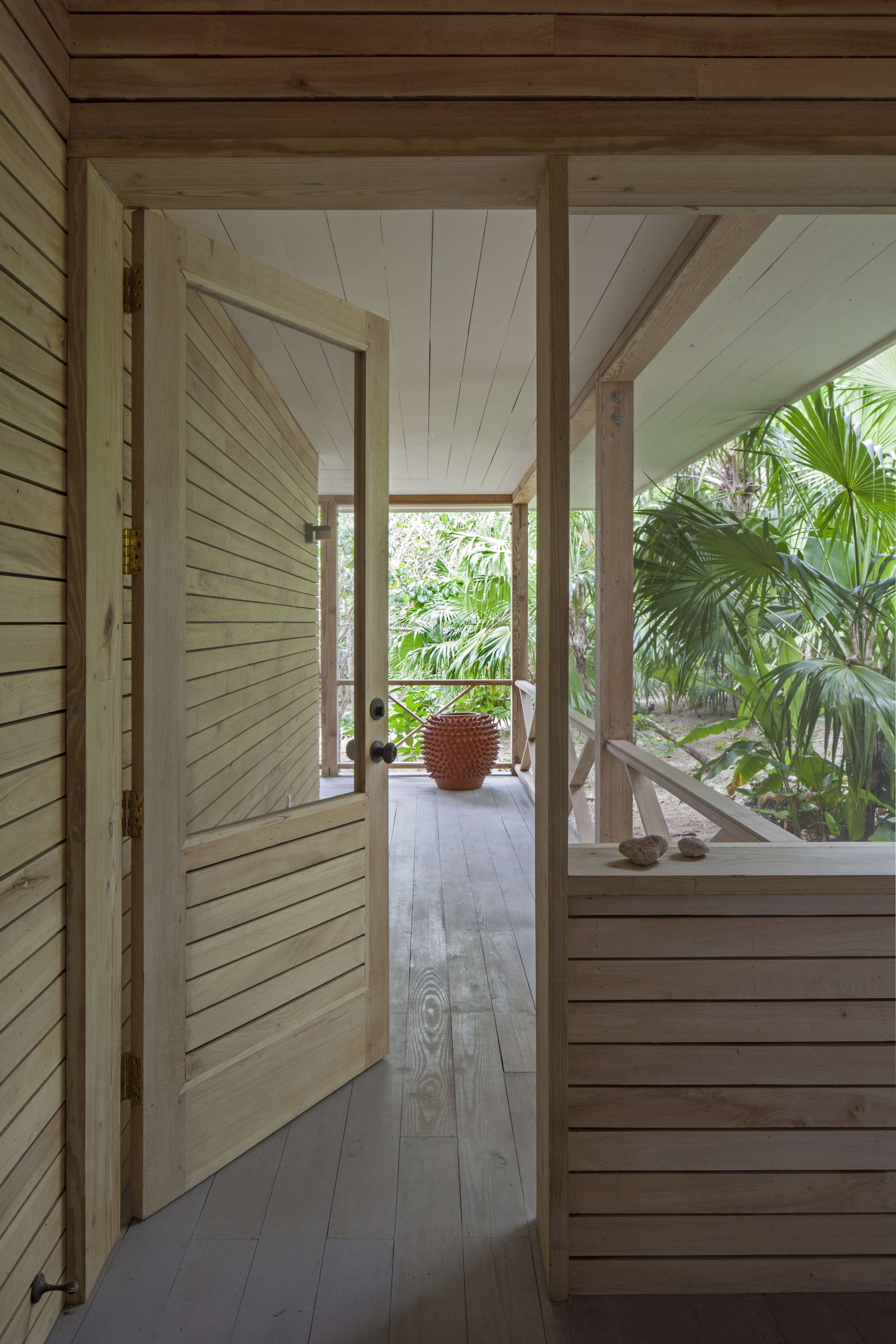 Above: The guesthouses’ shutters and doors also are constructed of cedar, grown and milled in Jamaica. Porch ceilings are whitewashed. 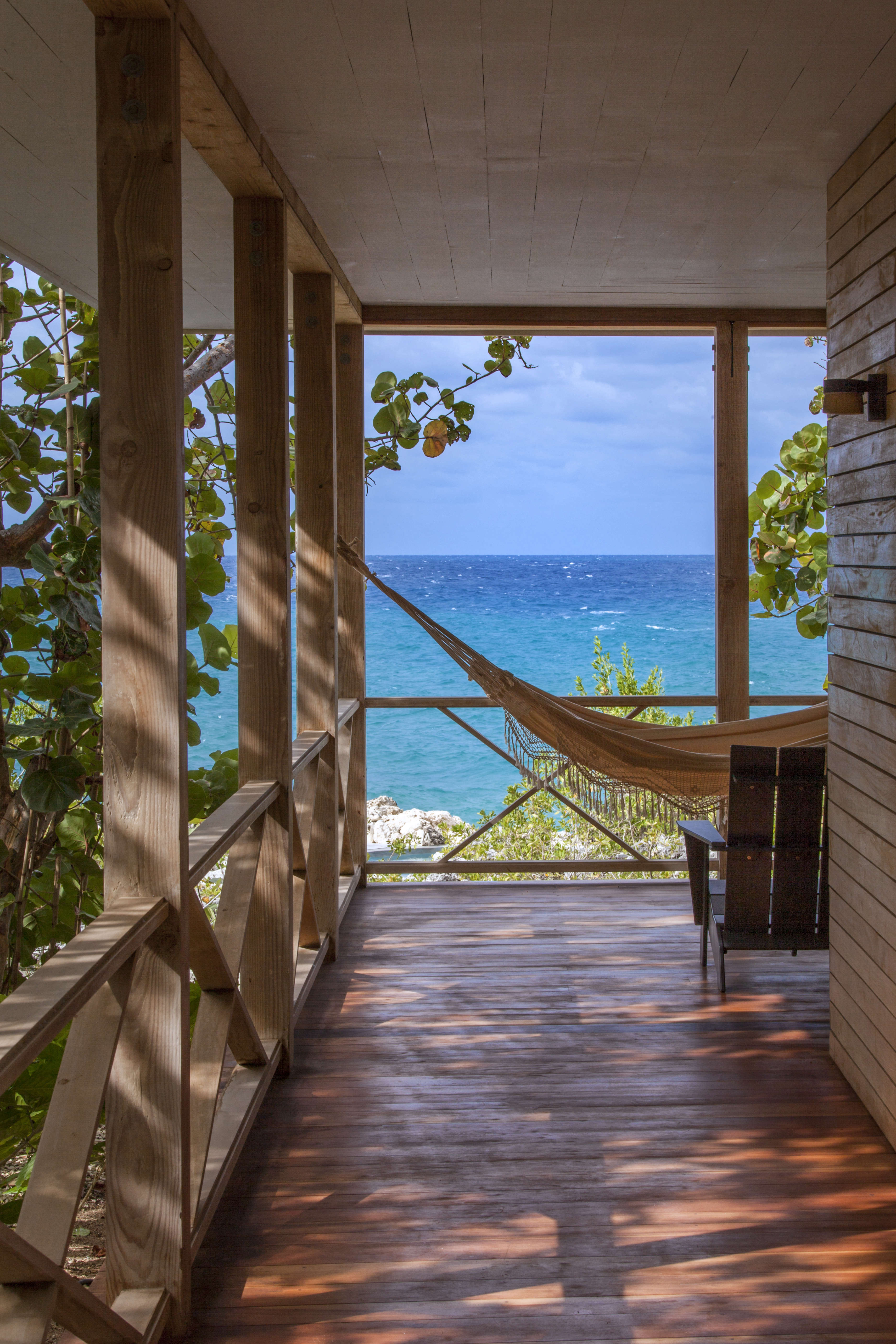 Above: “We used two types of wood for the flooring, imported African mahogany and in a couple of instances, regular knotty fir,” says Knibb. 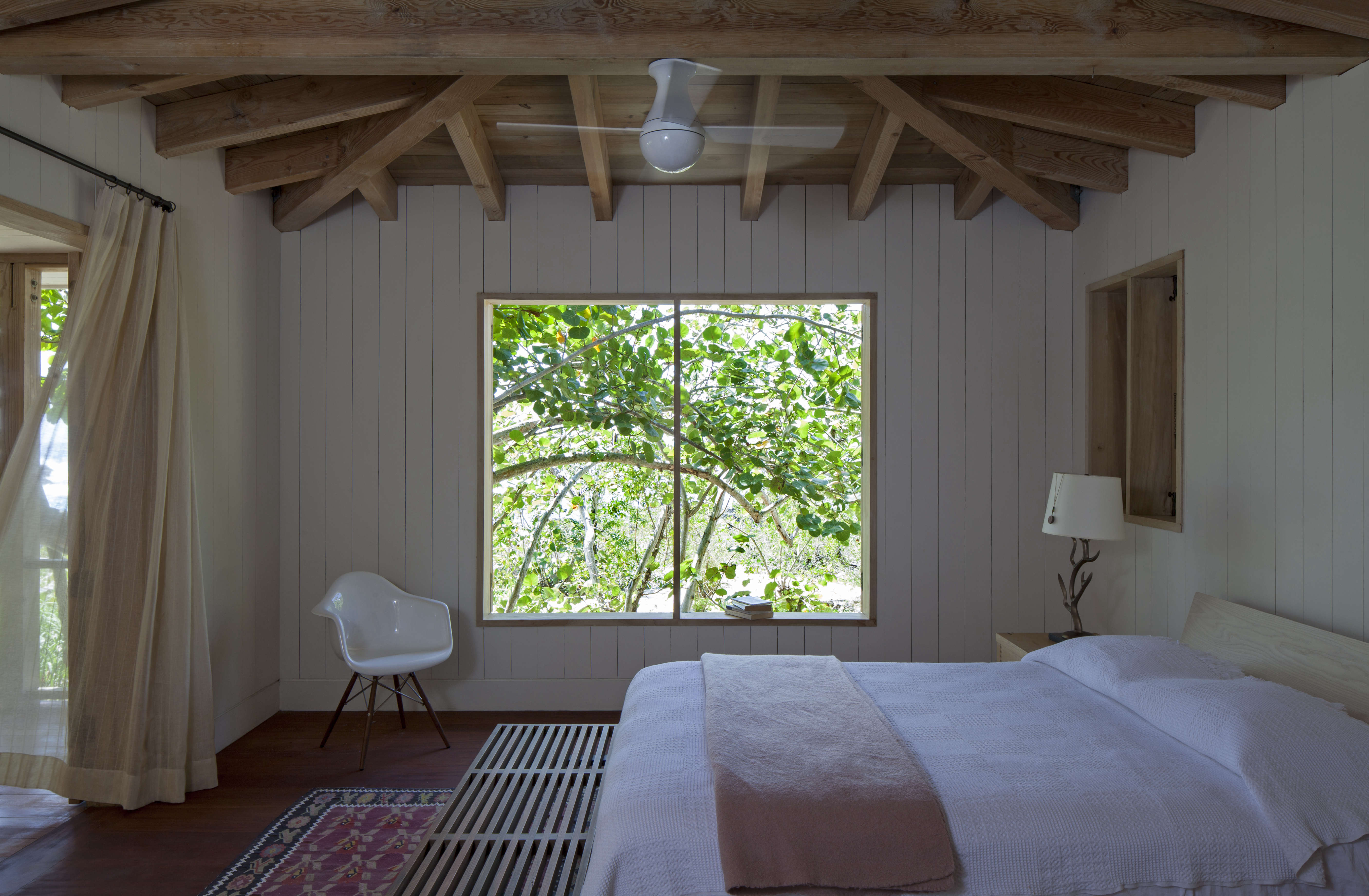 Above: Indoors as well as out, “we tried to stick to a very restrained palette” which allows the natural landscape to be the focus of attention, says Knibb. 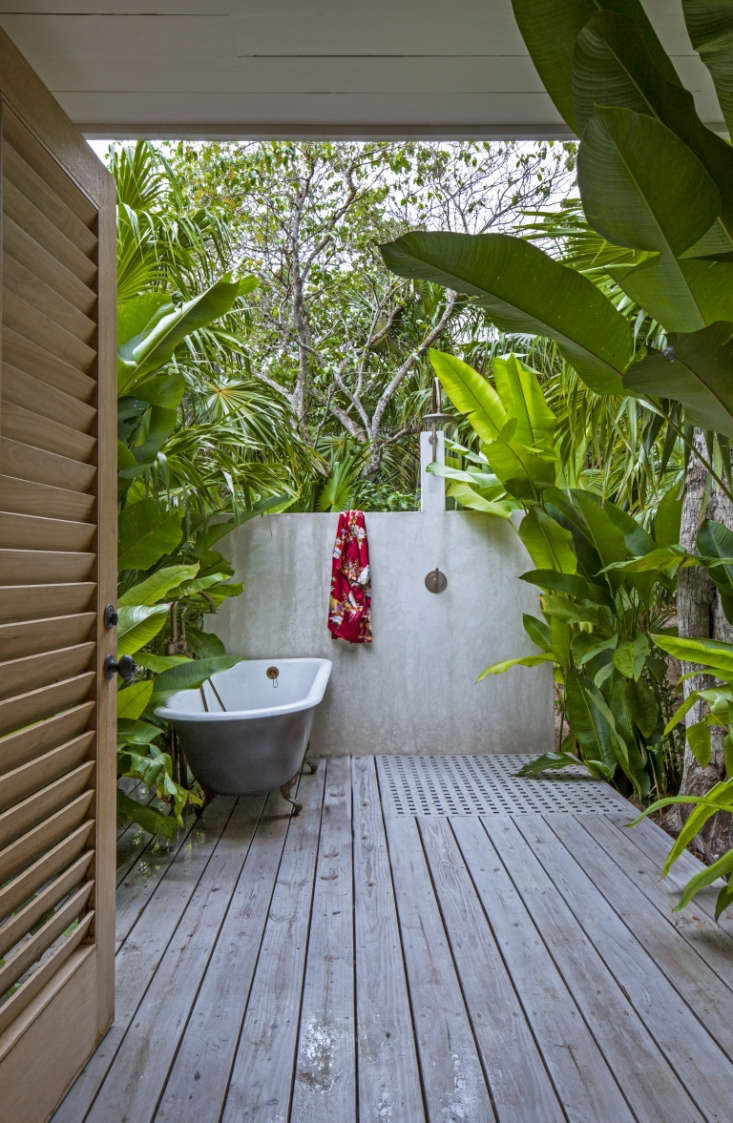 Above: A bath towel provides the touch of red next to an outdoor shower. 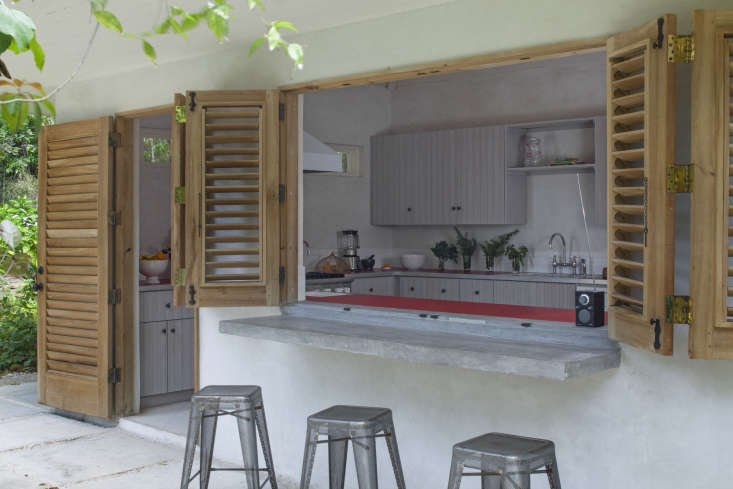 Above: The freestanding communal kitchen has a louvered door and shutters to connect it to the garden. A terrace of poured concrete stepping stones surrounds the building. 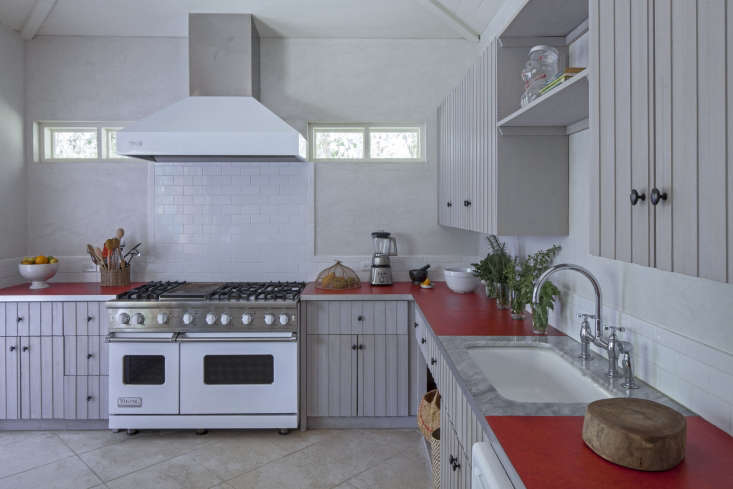 Above: Inside the kitchen are high-end appliances—and a dash of red on the countertops. 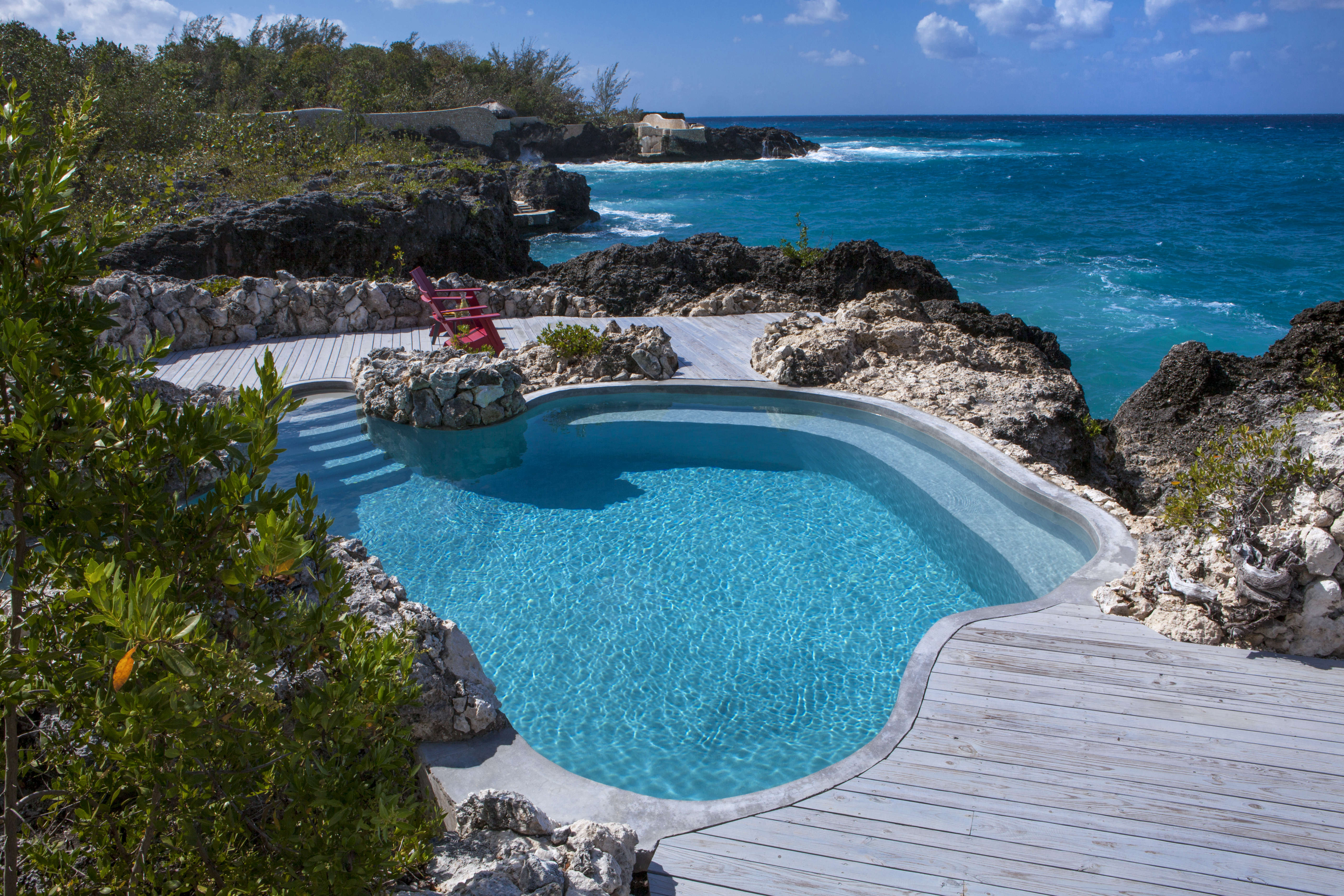 Above: Carved out of an existing indentation in the rocky shoreline, the swimming pool has an organic shape. A deck of local pressure-treated wood is stained a pale blue to complement the color of the water. 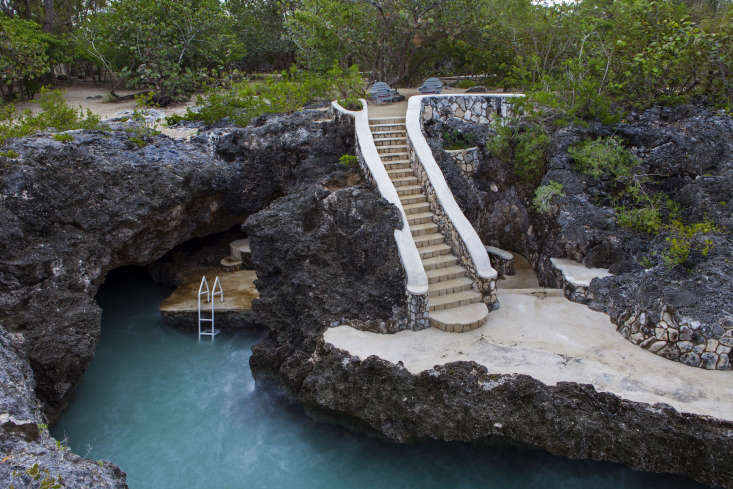 Above: Knibb designed a staircase caved into the rocks to create to areas for sunbathing near the water. From the water, a lip of rock hides the concrete deck.

“The rock is coral that’s been exposed and darkened with sunlight,” says Knibb. “When you chip away at it, it’s white underneath, and it’s indicative of the coastline around Jamaica.” 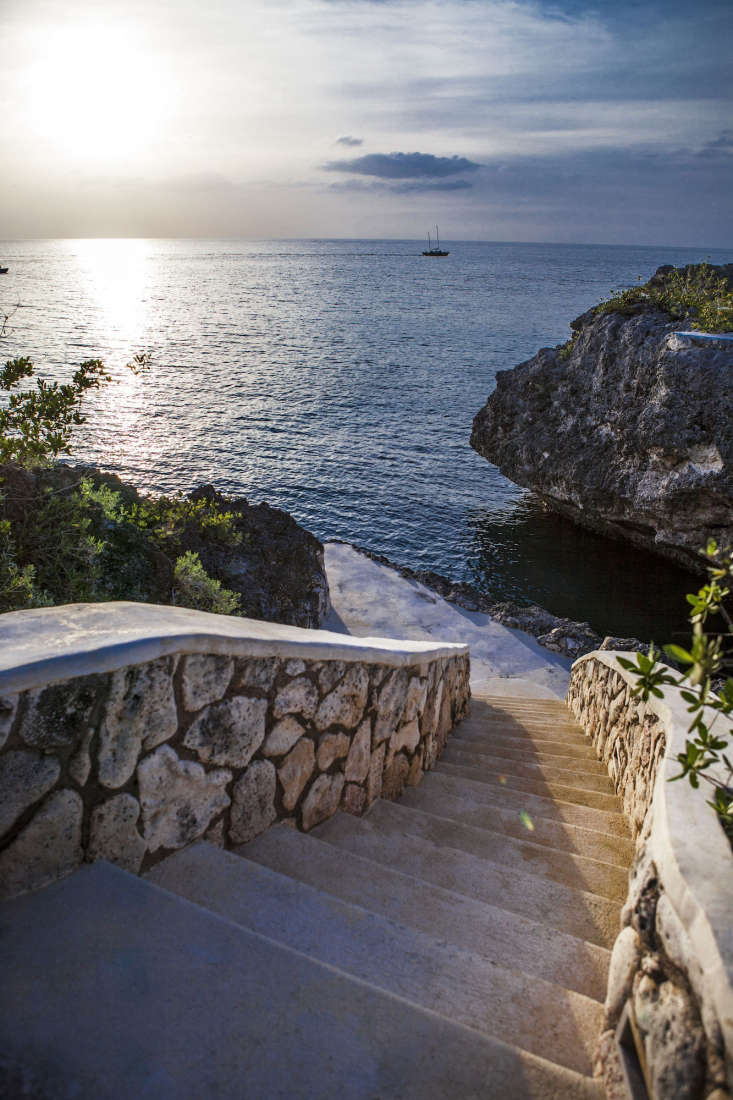 Above: The staircase is is the only place we actually cut into the rock,” says Knibb. 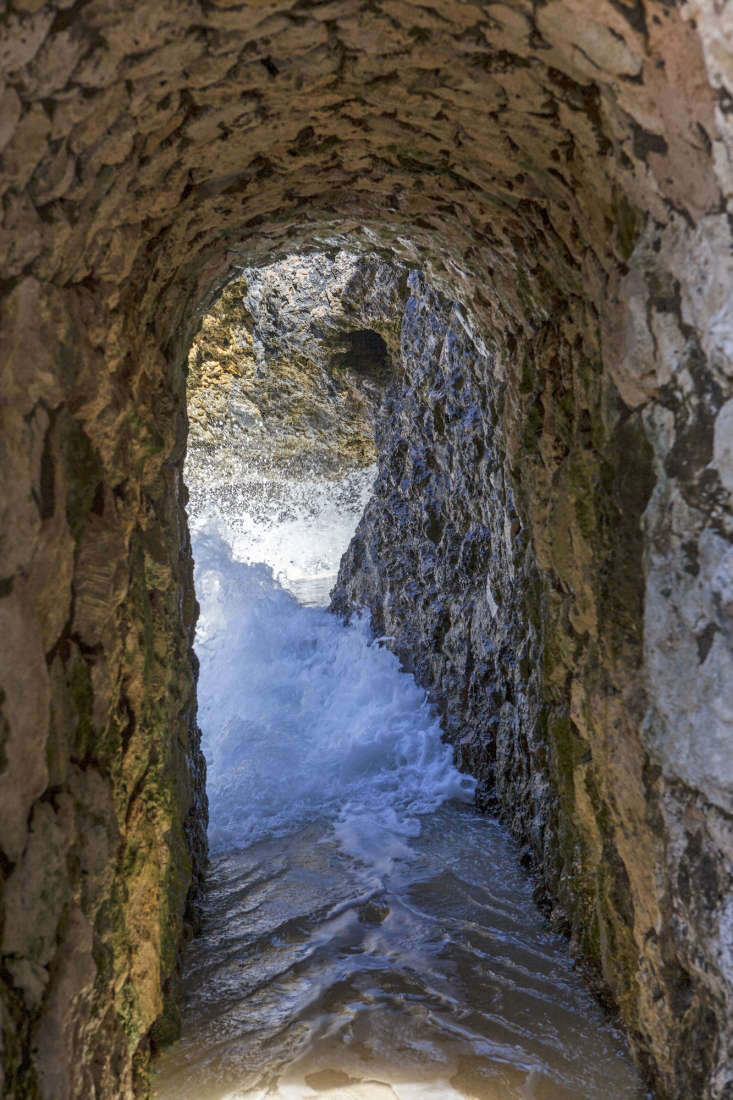 Above: Hidden beneath the stairway is an entrance to a natural cave.

“You get a lot of caves on this side of the island,” says Knibb. “Everything about this place makes you feel like it’s a place where you can escape, from time.”

For more of our favorite tropical landscapes, see:

Ask the Expert: 5 Tips to Design a Beautiful Edible Garden

Garden Visit: Opus 40, An Environmental Sculpture in the Catskills