As word spread last summer about a mysterious disease that was wiping out impatiens, I often thought of my former neighbors in the leafy enclave of Sunnyside Gardens in Queens, New York.  When I lived there during the 1990s, impatiens was the go-to plant for providing color and charm to the tiny front yards of our attached brick homes, shaded out by the statuesque old London plane trees that lined our streets.

There were no nurseries nearby, so a nice man down the block took orders.  You could choose a color, but impatiens was the only plant he offered.  Later he distributed the flats of the little flowers after they arrived at his house.  I was new to shade gardening and my attempts to grow other flowers such as salvia and verbena had failed miserably, so I eagerly signed up.  With a deadly mold attacking impatiens in at least 33 states and the District of Columbia–and spreading fast–these days I wonder how those gardeners, hooked for so many years on that one dependable little flower, are faring.

So, how can you fight the blight? Read on:

The disease in question is a strain of downy mildew (Plasmopara obducens).  So far it affects only Impatiens walleriana, while other members of the Impatiens family such as New Guinea impatiens seem to be unaffected. In the US the blight has struck on both coasts, in the Midwest, and in Texas.  Cases have also been reported in parts of Canada.

To get an idea of the scope of how beloved this plant is, read the Missouri Botanic Garden’s pre-blight description of it: “Impatiens (sometimes commonly called bizzy Lizzy) is the most popular annual bedding plant in the U. S. today. For easy-to-grow, non-stop flowering in shady conditions, it has no equal.”

Above: Impatiens Walleriania leaves with symptoms of blight. Photograph via Ball Horticultural Growers.

Surprisingly the blight has apparently been around since it was first identified in the 1800s; no one is sure why it suddenly has become a problem now.  The symptoms are easily confused with many other conditions, such as slug damage and inadequate watering.  First a white, downy growth can be seen on the undersides of leaves. Then flowers and leaves drop; soon all that is left of your plant is a clump of mushy bare stems.  There is no known remedy.

Above: A Rockapulco White Double Impatiens Walleriana is $7.49 from Proven Winners.

So, what to do?  If you have put off your fall cleanup, experts agree that you should dig up the affected plants immediately and discard them along with any associated soil or mulch.  Do not compost them; send them off with the garbage to be incinerated or buried in a landfill.  Containers that held impatiens should be thoroughly washed before being reused.  The spores of the disease travel easily on the wind and could show up in packaged soil or mulch. Because there is no known way to prevent the disease, don’t even think about planting impatiens in the spring.

Above: A clump of purple Browallia via Monticello, where you can buy a packet of Browallia Seeds for $3.95.

The good news is that you have plenty of time to find replacements.  So far begonias seem to be at the top of the recommendation list.  There are many varieties that are colorful, good in shade, and widely available. Breck’s sells a five-plant Picotee Begonia Mixture for $18.74. A gardener friend of mine recommends browallia.  She has found it in purple and in white and says it is a prolific bloomer that does just fine in the shade. 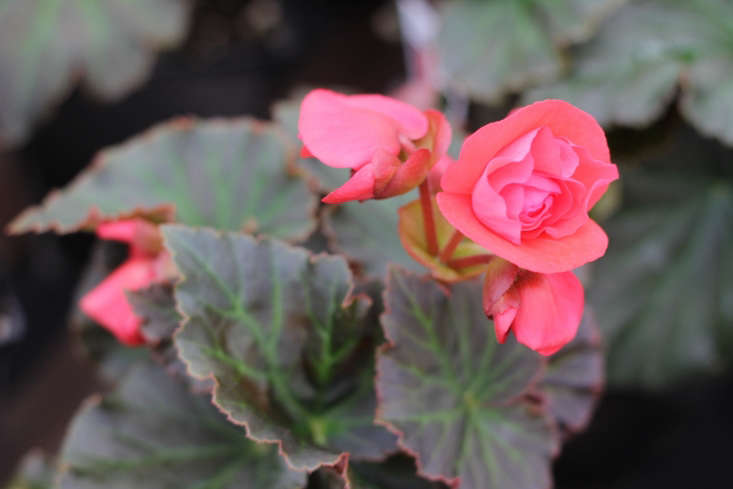 Above: A shady begonia. Photograph by Serres Fortier via Flickr.

Consider it a shopping opportunity. If gardening catalogs’ offerings don’t inspire you, perhaps it’s time to consider some shade-loving perennials.  You could even plant them now and they will come back year after year… certainly at least until scientists can come up with a blight-resistant impatiens.

For more information on the impatiens, blight the Suffolk County Cooperative Extension has produced a handy fact sheet.

For more on shade loving plants take a look at color in the winter shade garden.