The orchid was a housewarming present from my grandmother. It came from a quaint flower shop down the street that is owned by a neighborhood family. This gave my orchid an advantage over those on sale in the impulse-buy section of the grocery store, whose roots are already dead while their disingenuous blossoms give the impression of life. Those poor orchids, in consumer friendly shades of purple and pink, lose their flowers in days. “The solution,” an employee at the grocery told me, “is to buy a new one.” At $10 a pop, business is booming. 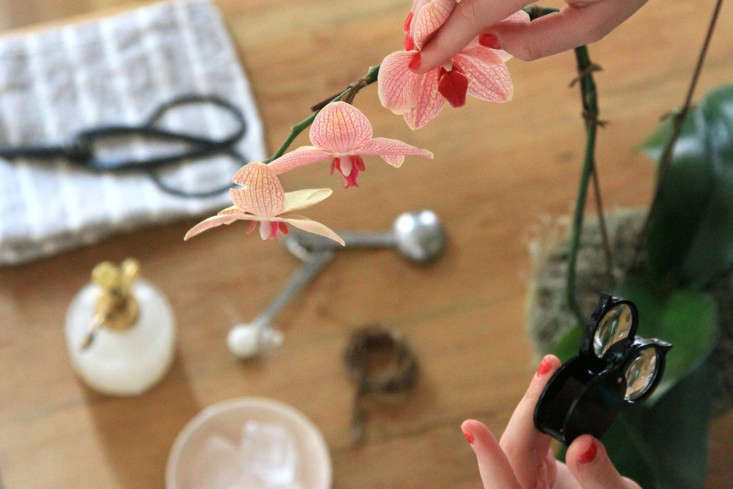 It was not only my orchid’s superior provenance, but also its satiny white blossoms webbed with a network of delicate fuchsia veins–a characteristic of some Moth Orchids (Phalaenopsis), as I quickly identified mine to be–that made it feel precious, an irreplaceable work of art. To imagine my orchid “swapped out,” the way that my parents used to conceal the deaths of my goldfish, stung like an insult. I settled the Phalaenopsis on my dresser in a warm patch of sunlight and accepted the mission with which I had been entrusted: to keep it alive. 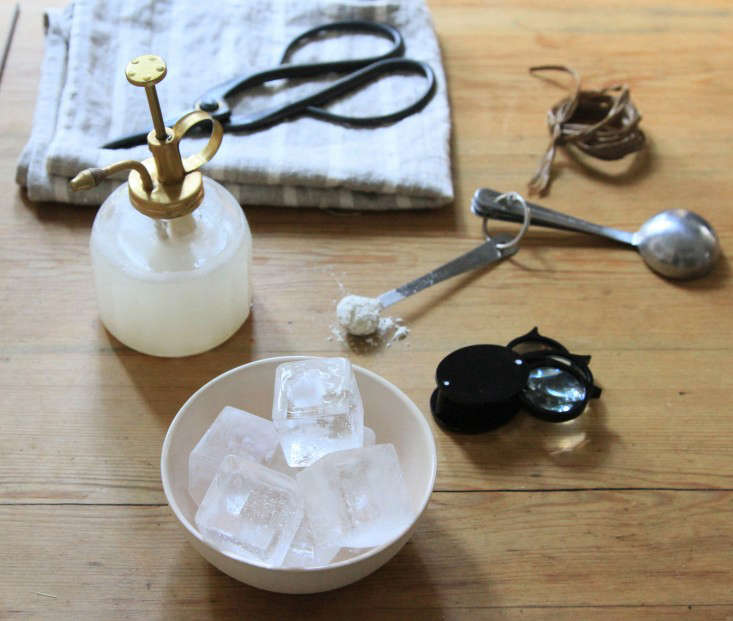 Orchids are known to inspire obsessive behavior in their owners. In The Orchid Thief by Susan Orlean, orchid hunters track rare varieties of the flower all over the globe with frank disregard for law and human life. Meryl Streep in the film version infiltrated a ring of orchid smugglers stalking the mythic Ghost Orchid, an endangered variety prized for its intoxicating pollen. And so it was that I drank the orchid Kool-Aid. 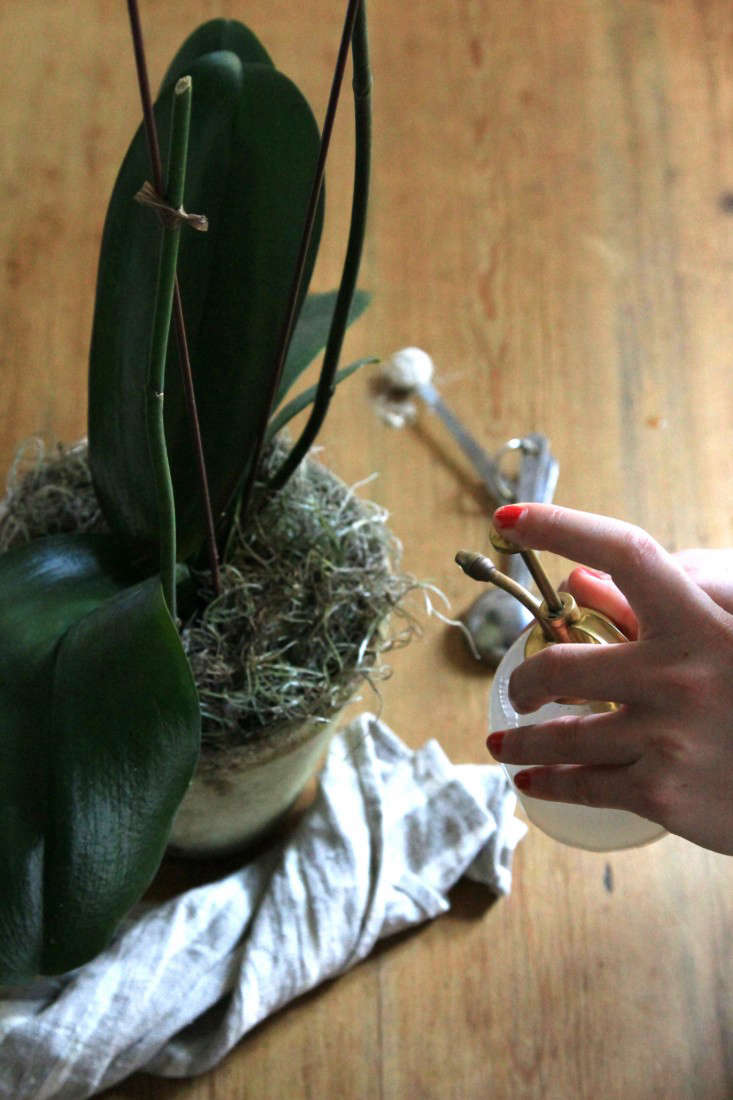 In consultation with several orchid-specific blogs and conversation forums, I’ve been using an organic brand of orchid food. This I mix with water, taking care with the proportions, and mist weekly over Her Highness. 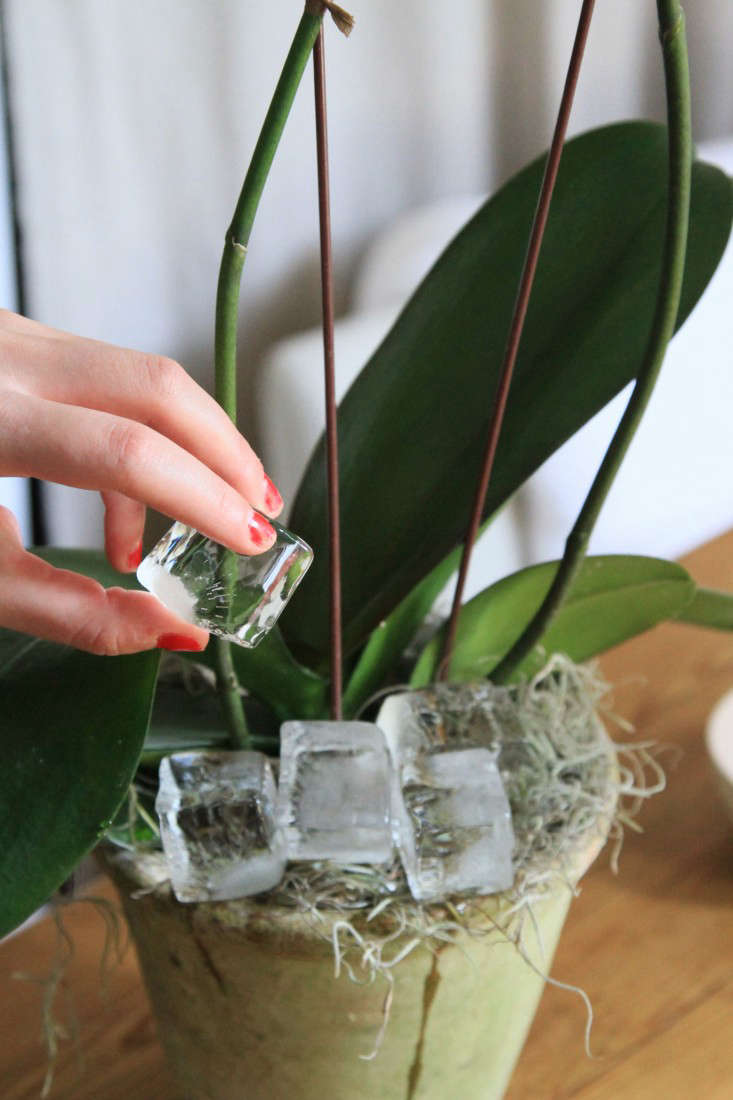 Of those not already doomed in the checkout line, most orchids (I wince as I write this) drown to death. Though the orchid is native to the tropics, its roots need to be well drained so no water pools at the bottom of the orchid pot. For this reason, some orchid devotees un-pot the plants to water them in the shower. Un-potting seemed too risky to me. I err on the conservative side and water with ice cubes once a week. 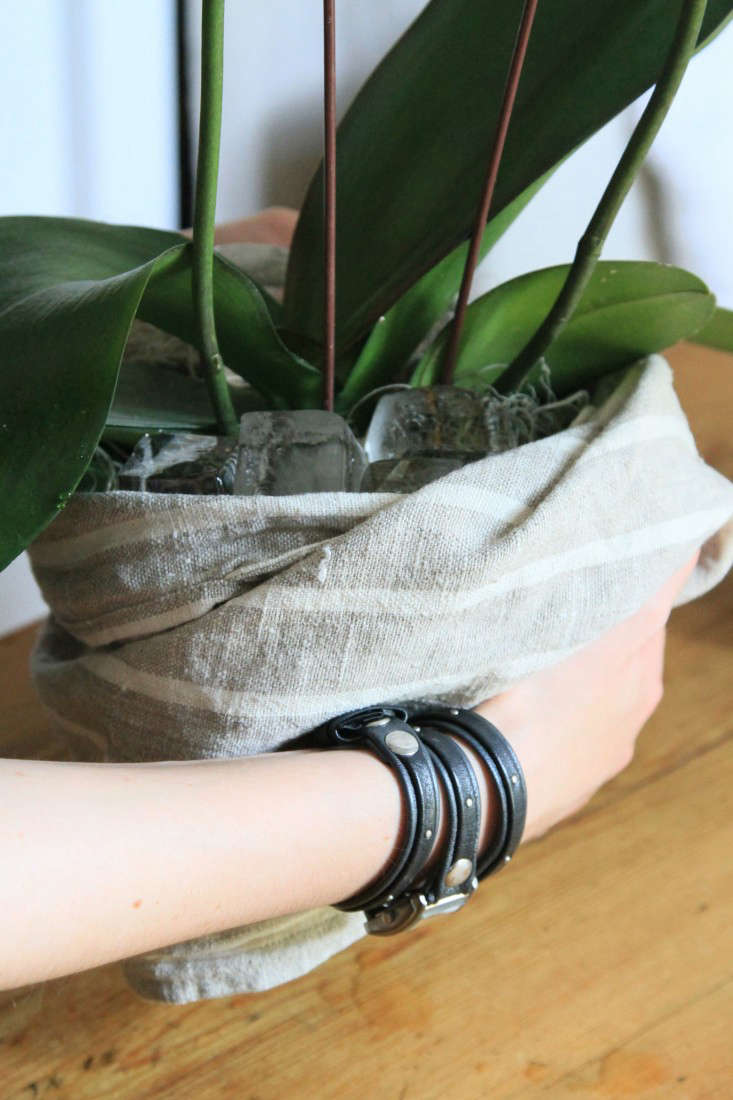 Ice cubes melt slowly so the water has time to be fully absorbed by the roots. One cold day, I worried the ice wasn’t melting at all, so I wrapped it in a fuzzy plant-sweater. It was then that I realized our relationship wasn’t all about looks–it went deeper. 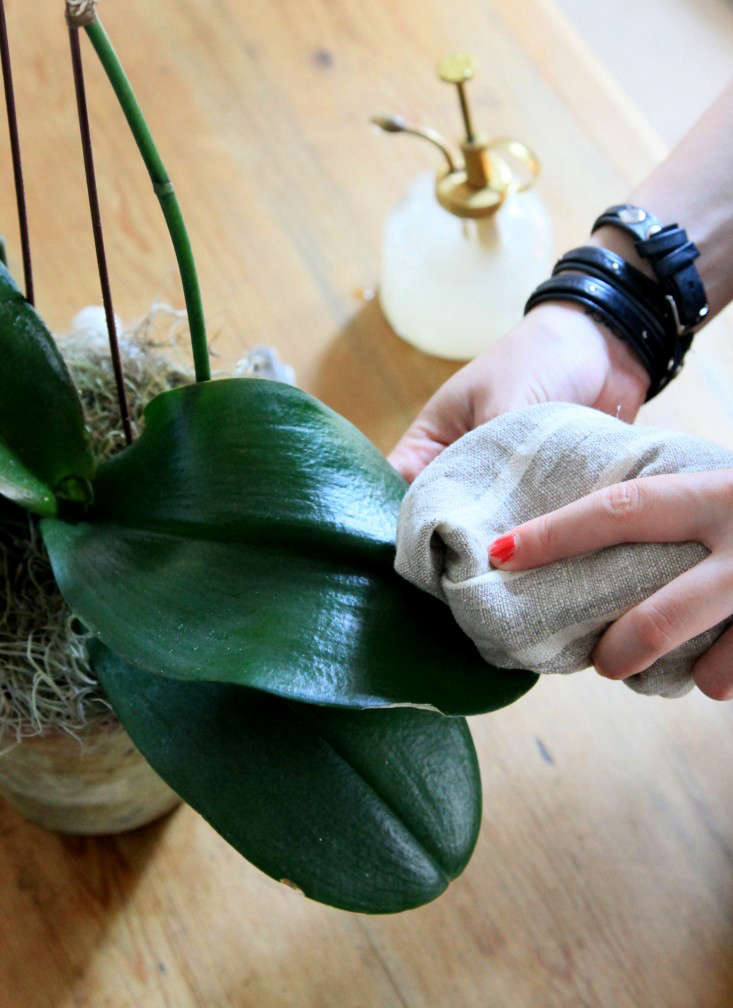 Months passed. The marbled pink-and-white petals had grown fuller than ever so that each flower was nearly the size of my hand. Their weight made them lean over voluptuously on their stakes. The leaves, which I sometimes polish, were thick and glossy enough to reflect the sunlight. 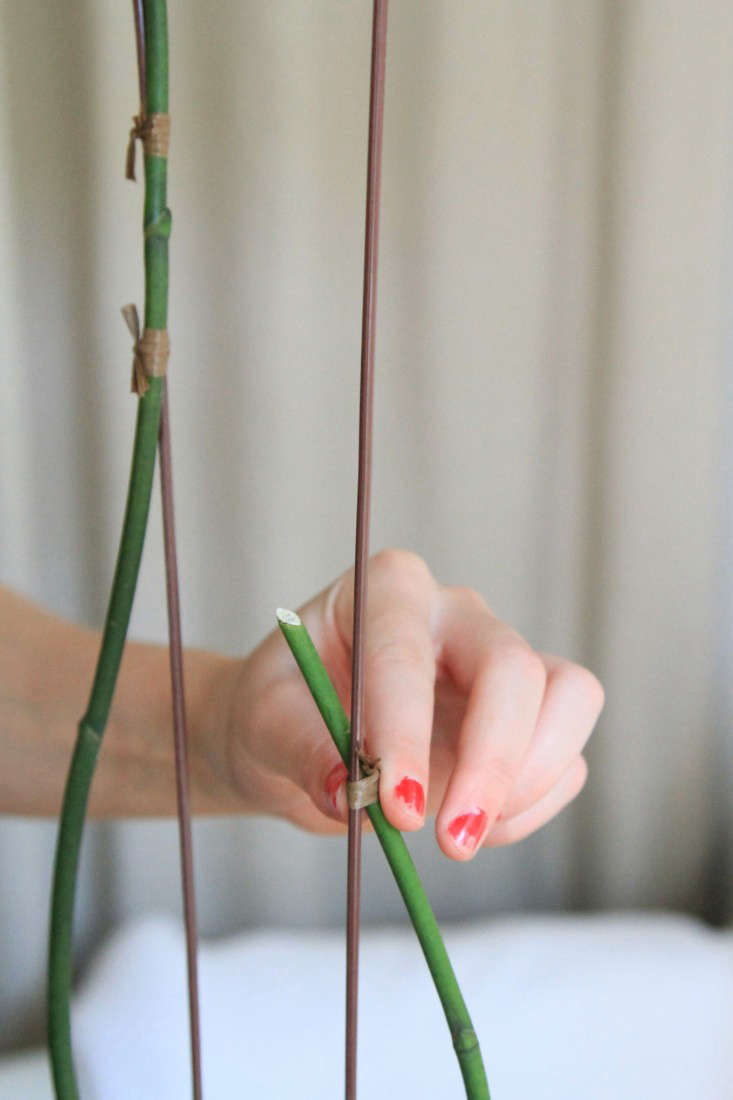 With these auspicious signs telling me I was on the right track, I started to get complacent until one day, I woke up to a dead blossom, and then another, and then another, until all the blossoms on one of my two stalks had perished. The flowers on the other stalk were still smugly perfect. It was the best of times, it was the worst of times. I had two options: cut off the empty stalk completely, or cut halfway and hope it grows back. I chose the latter. 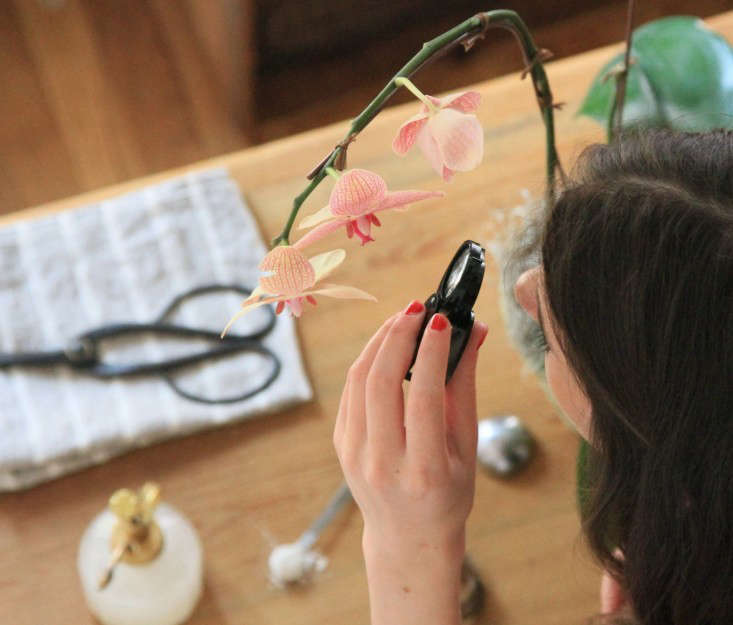 The orchid was mocking my efforts, I felt. But the worst part about owning a sullen orchid was seeing the robust orchids growing in my dentist’s office, the lobby of a friend’s apartment building, and at a restaurant where I ate lunch. It seemed they were following me all over New York to remind me of my depressed orchid at home. They must just replace their orchids week to week, I thought to myself with unusual vitriol. The alternative was too terrible. Does everyone else know something I don’t, like an orchid conspiracy? 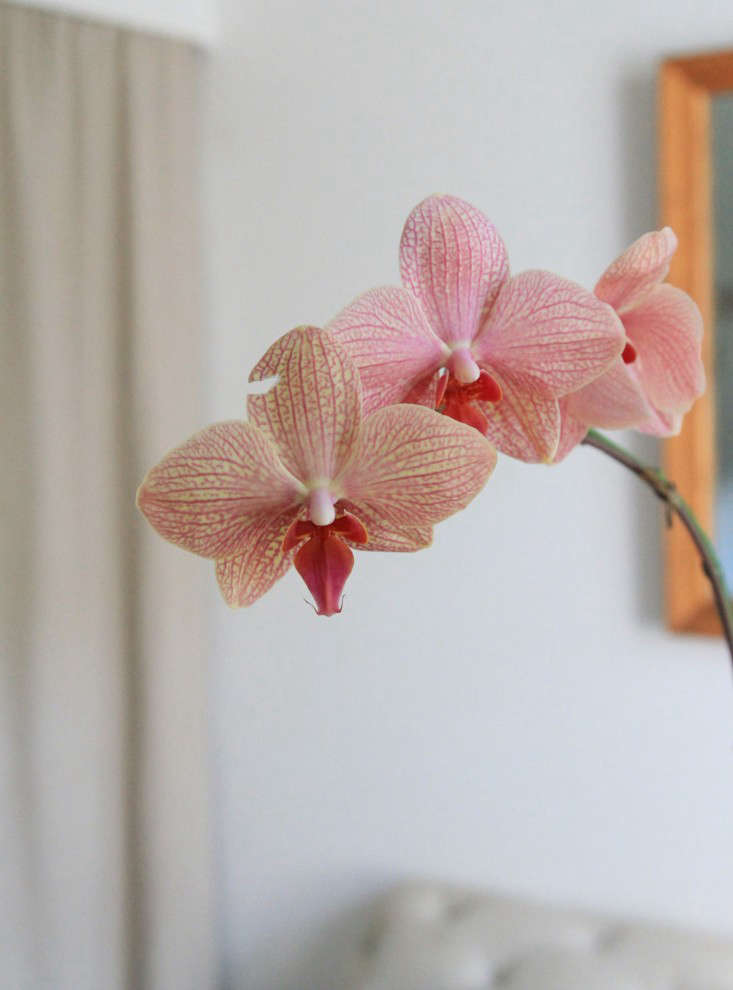 Luckily, it turns out that the plants go through life cycles, and blossoms naturally drop to make room for new buds. I didn’t have a mutiny on my hands, only a stalemate. 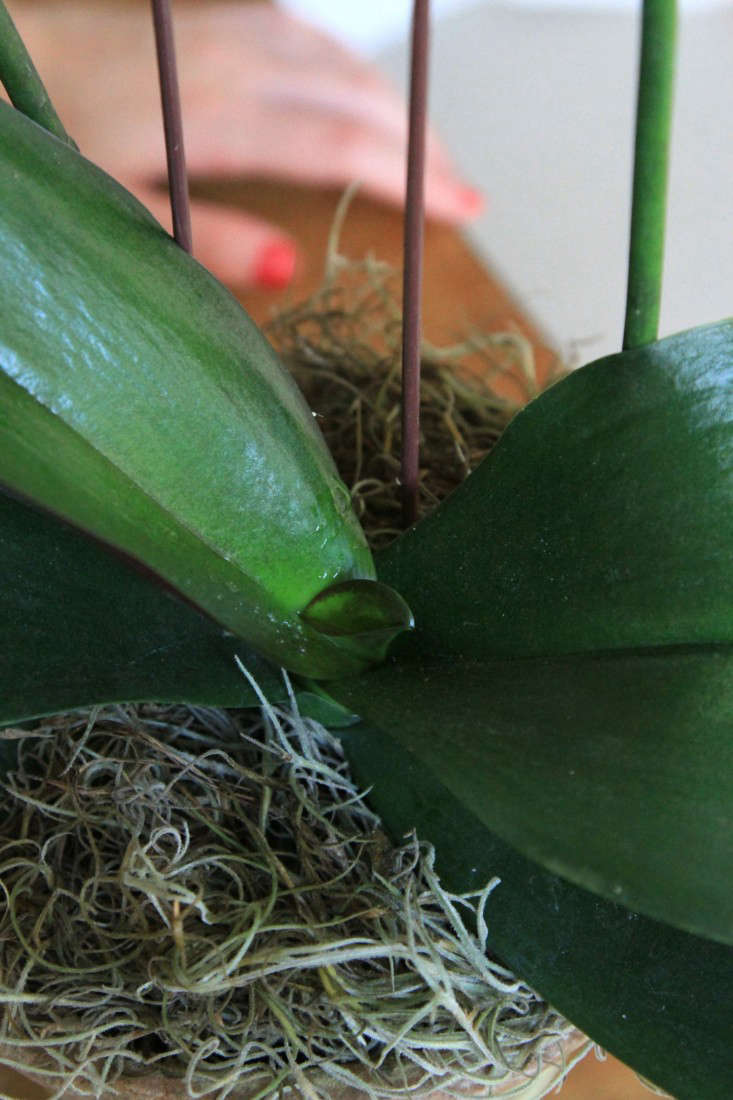 The past few weeks have brought a détente. There has been encouraging new leaf growth and signs of coming buds. Several luscious flowers are thriving on one of the stalks (except where there’s a small bite…what on earth did that?). At present, it seems my orchid care experiment will succeed, but if there’s anything Her Highness has taught me, it’s not to get too comfortable.

We’re obsessed with orchids. See more of our favorite stories:

Finally, get more ideas on how to successfully plant, grow, and care for orchid with our Orchid: A Field Guide.

Everything You Need to Know About Perennials