I was at a marijuana dispensary in Berkeley not long ago where the budtender told me about a legendary California hybrid called ‘Blue Dream.’ Through the magic of botany, she said, this cultivar ameliorated the bad effects of both of the main strains of cannabis–sativa (anxiety, paranoia, sleeplessness) and indica (dopiness, general stupidity)–while heightening their desired effects.

She pointed to the shelves along a side wall where tiny plants–clones grown from seed–sat in spiky rows, lit purple by overhead grow lights. She walked over, selected a ‘Blue Dream’ clone, and beamed as if she had picked a puppy from a champion’s litter: “Here’s a cutie!”

I took the potted pot gingerly and examined it with fear, though in most respects the baby ‘Blue Dream’ looked like any nursery seedling. It was a few inches tall and already had sprouted a bunch of sawtoothed yet fragile-looking leaves. It reminded me of a baby rattlesnake.

“That’ll be $15,” the budtender said, before I’d made up my mind to take the little plant. Was this a good idea? I’m the IT guy at home, not the gardener. The State of California allows me, as a medical marijuana permit holder, to grow up to six mature plants (or a dozen immature plants) for my own use. But I’ve never grown any kind of plant, unless you count the tomato clone that once sprouted in a wet sneaker I’d abandoned behind a radiator in college. Can you even grow marijuana in a sneaker? 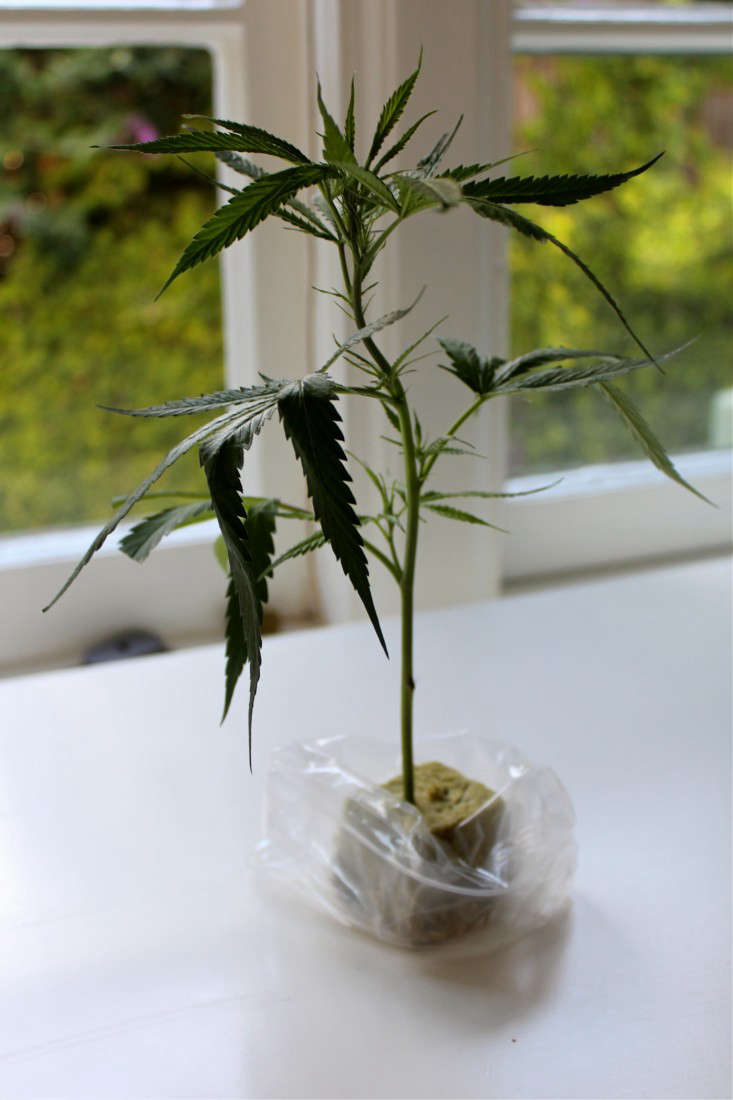 Above: My Blue Dream seedling came home in its starter plug made of rockwool (a mix of basalt rock and chalk).

I had many questions. How long does a marijuana plant take to grow? What do you feed it? Does it drink a lot of water or will it tolerate California’s Biblical drought? How big does it get and when do you harvest it? Would I need to cure it like tobacco, and if so, what does that even mean? What kind of yield could I expect from my little plant?

On the way home from Berkeley, as I glanced at Cutie in the passenger seat, looking vulnerable and tiny, I wondered how I had gotten into this.

It started in the spring, when I made the decision to get a permit to buy medical marijuana. It wasn’t peer pressure, exactly, but some of my best friends were doing it–and that had put the idea in my head. Honestly, the whole process, from getting the marijuana card to actually buying weed, sounded pretty interesting, like something I’d want to tell my grandchildren about, after Prohibition was over.

So I fired up Yelp one afternoon and zeroed in on a local doctor who specialized in such matters. I phoned something that called itself The Telepsychiatry Network, got voicemail, and left my name, saying I’d like to schedule a visit. While that did not seem like a promising start, two minutes later a woman called me back and identified herself as the doctor. “Is this about a marijuana permit?” she asked. 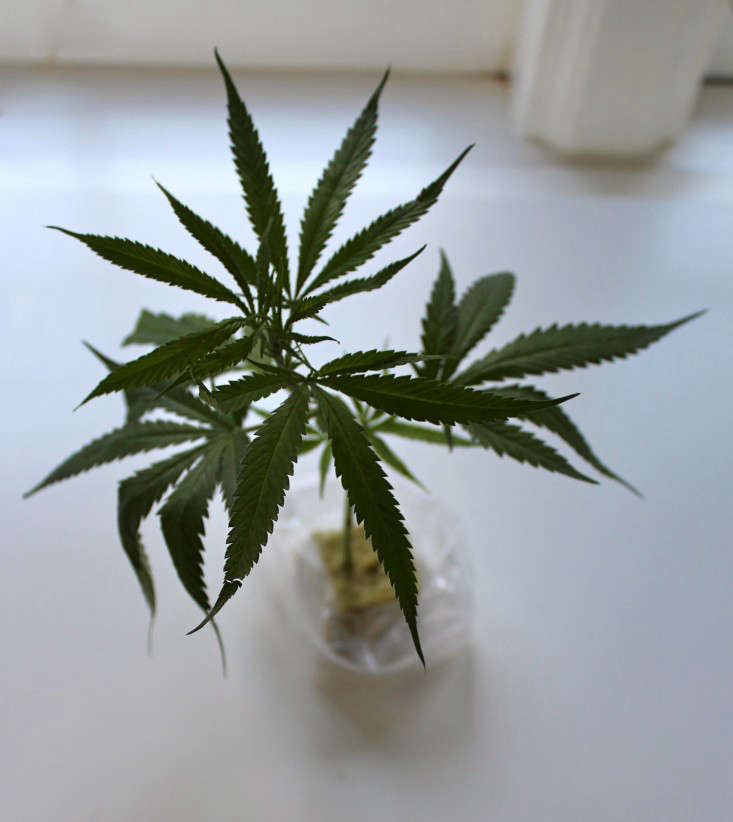 Above: My marijuana seedling, Day 1.

She said I could come over and that the examination cost $100. Her office, in a modular redwood building alongside Highway 101, had trippy psychedelic photos on the wall, and an honest-to-God M.C. Escher table book. The doctor asked why I wanted medical marijuana. I told her truthfully that I had trouble sleeping sometimes, and that I did not like taking prescription sleep medicine.

She signed a heavily pixelated, one-page form that had been Xeroxed too many times. She made it clear that this was not a prescription, just a permit, good for a year. Then she gave me the business card of a dispensary she recommended.

I ended up driving to a different dispensary, the one in Berkeley, which a dear friend had recommended.

A guard in sunglasses who was patrolling the parking lot checked my permit, then waved me inside the building, where a receptionist phoned the Telepsychiatry Network doctor to receive verbal authorization–SOP requires “new patients”  to establish their bonafides at dispensaries.

Satisfied, the receptionist gave me a frequent flyer card, which would allow me to earn discounts on purchases, and two welcome gifts: a cigarette lighter emblazoned with the cannabis-leaf logo of the shop, and a small pack of  raspberry-flavored dark chocolates that were suffused with marijuana and worth $10.

“We also offer 24-hour delivery of our products,” the receptionist said. The dispensary had a website and a mobile app to make ordering easier.

The receptionist pointed to the dispensary proper, a lofty room adjacent to the reception area. “If you know what you want, you can go directly to the express line,” she said. “If you need consultation, go to the other line.” 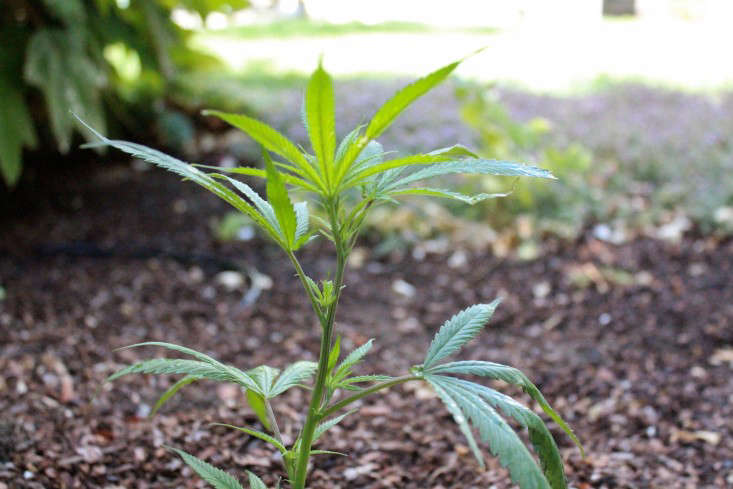 Above: My seedling finds a new home in the garden.

It was the Other Line and all my questions that led me here, to my backyard, Baby Cutie trembling expectantly in hand.

Now what? I found a spade and dug a hole 8 inches deep, and planted her in a spot in the garden that got plenty of sun and was reasonably secluded. It was time to learn how to be a marijuana farmer.

Coming next: Where do you get gardening advice when what you are growing is marijuana?

For more about marijuana plants, see:

Announcing the Winners of the 2015 Gardenista Considered Design Awards