What fruit tastes like the tropics but is cold-hardy? Ripens when apples come tumbling into market as the weather veers from sultry to moodily crisp, with suggestions of hurricane and autumn at is edges? Looks like an unripe mango, but when cut reveals glossy brown seeds embedded in aromatic golden flesh? Is characterized by kaleidoscopic flavors: pineapple, guava, passionfruit, feijoa and mango—in a single, silken mouthful? It is a pawpaw. And it is native to the United States.

Yet most Americans have never eaten or even seen this quintessentially North American fruit. Slice it open and inhale. Dip a teaspoon into it. And then ask for more.

Pawpaw—sometimes papaw, or wild banana—is the fruit of Asimina triloba. (It is not the same as papaya—Carica papaya—which is also known as pawpaw in some countries.) The wild pawpaws’ native range is in rich woodlands and river bottoms in the eastern, mid- and northwestern, and parts of the southern United States. It is the northernmost denizen of the seed-studded custard apple family, Annonaceae. While custard apples are ivory inside, pawpaws are shades of yellow and apricot.

The first pawpaws I tasted were shipped to my Brooklyn door in September 2016 from Southeast Ohio, by Integration Acres, a food forest enterprise based outside Athens. I had never tasted—or smelled—anything like them. The box waiting in our hallway perfumed the entire apartment. I was hooked.

Later, visiting the annual Pawpaw Festival (founded by Chris Chmiel, Integration Acres’ proprietor and a pawpaw evangelist), outside Athens, Ohio, in September, I walked in nearby woodlands and picked wild pawpaws hanging in clusters from slender trees growing alongside another native flavor, spicebush (Lindera benzoin).

Since then I have seen them in the city’s botanical gardens and at Historic Green-Wood. I have bushwacked my way to pawpaws that grow in relative anonymity in the woodland vestiges of New York City, been invited to harvest annually from the two trees grown by my 80-something neighbor, Lola Horowitz (who repels marauding squirrels with a fully loaded, pump-action watergun), and have haunted a local farmers’ market at Brooklyn’s Grand Army, where I buy the fruit from Bradley Farms as late as October. I am a lucky, lucky pawpaw eater.

Pawpaw trees are hardy from USDA zones 5 – 8. They require rich soil, plenty of moisture, and good drainage. Although they are understory trees in the wild, full sun is ideal for optimal fruit production. Shaded, woodland trees tend to grow in tall, skinny, clonal thickets and produce relatively few fruit. Cultivated pawpaws in full sun tend to be broader, with more fruit. Two trees of different named cultivars are recommended for ideal cross-pollination and fruit-set to occur. Pawpaws produce fruit after about seven to eight years.

After the intriguing burgundy blossoms are pollinated (by hand, or by insects attracted to their aroma of carrion), the fruit ripens in late summer and into fall.

Pawpaws’ appearance when exceptionally ripe can range from bruised-looking and utterly black to pale green and yellow. The rich flesh inside suggests tropical pudding with hints of burnt caramel (at least, to my palate), or a heady tropical fruit salad medley. But the spectrum of scents and flavors is wide and it varies from tree to tree, and cultivar to cultivar.

While unripe, hard fruit will not ripen once picked; if the pawpaw is collected within just a few days of ripeness it will in fact soften and sweeten further on the kitchen counter.

Ripe pawpaws lasts unusually well in the fridge, and the puréed, strained pulp freezes with no loss of flavor. It can be used in bakes, savory dishes, and lots of dessert. Do not eat the emetic seeds, and do not get pieces of seed into your food processor if puréeing the fruit; just a few pieces chopped into the flesh can cause stomach upset.

When I included a pawpaw chapter in my wild foods cookbook, Forage, Harvest, Feast, I created recipes for the fruit—cocktails, savory dishes, bakes, and desserts–that required serial testing: there was very little to go on, in terms of precedence. But the most rewarding way to eat your first pawpaw is raw and ripe. Slit down the middle, twisted open, and scooped up by the spoonful, its unique aroma is best savored simply.

In the introduction to that pawpaw chapter I wrote (in 2017): “Including pawpaws in these pages is an act of hope. The hope that one day we might see this now-elusive native fruit for sale in more markets, planted in more parks, and included in more gardens.”

That is already happening. Carry the pawpaw forward: Plant now. Harvest in a few years. 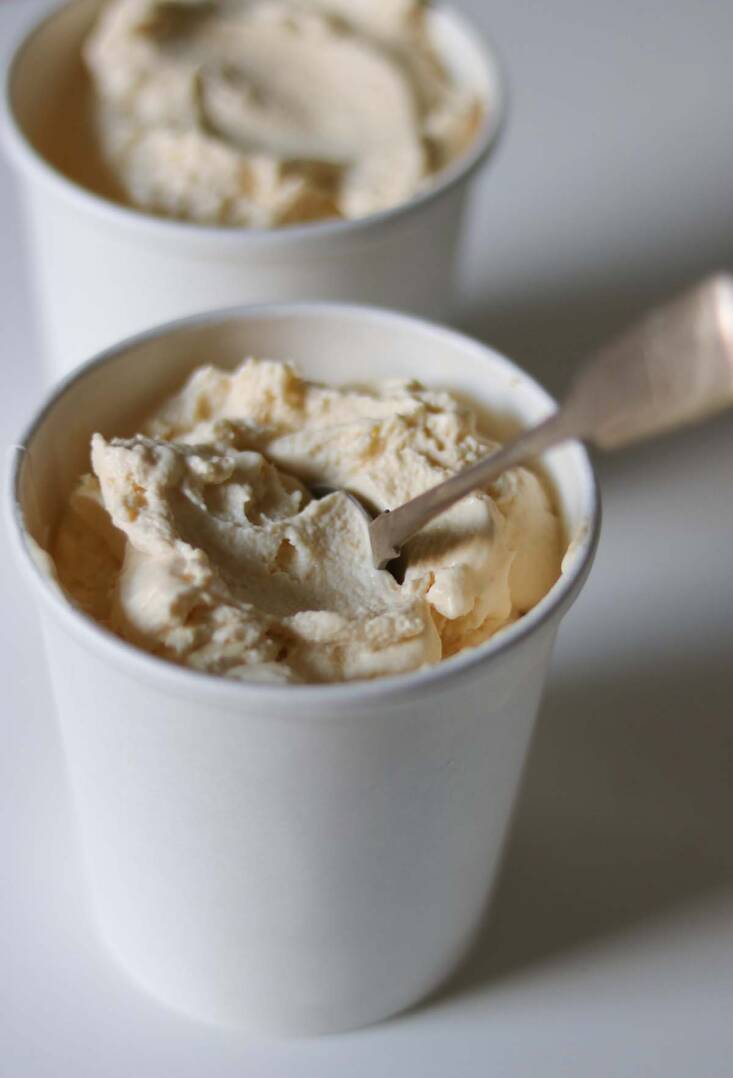 Place the pawpaw purée in a bowl with half the sugar and mix well. Add the cream, lemon juice, and liquor and stir. Taste. More sugar may not be necessary, but if the mixture isn’t sweet enough for you, stir in the rest. Transfer to your ice cream maker and churn until done (about 20 minutes). No ice cream maker? Whip the cream before adding the other ingredients, and pour into a bowl or dish and freeze. Stir every 30 minutes until frozen.

For more on fruit trees, see:

Houseplants: How to Decode the Info on Plant ID Tags