It turns out that my growing a perky little marijuana plant in my garden has titillated my friends and neighbors to an extraordinary degree. Everybody wanted to have a look at Cutie. I haven’t heard so many oohs and ahs since the birth of our first child. It was weird.

Maybe seedling pot plants, like baby humans, inspire awe because of their nascent potential. Or maybe marijuana is sexy because it’s forbidden. Whatever it is, everyone who visits us insists on a field trip to my secret garden. My buddy Adam, who had just returned from vacation in Mendocino, even came by with a “baby gift” he and his wife had found: a ceramic garden stake that said “Weed.” Presumably, it would protect my ‘Blue Dream’ cultivar from any overzealous yard man weeding the flower beds.

It was through one of those well wishers that I got my first scare and realized that, perhaps, all was not well in the Garden of Weeden. Two months after Cutie had taken root, sprouted a few feet into the air and sent out a half dozen leafing branches, I noticed my friend Josh (no relation) inspecting the plant late one summer day. 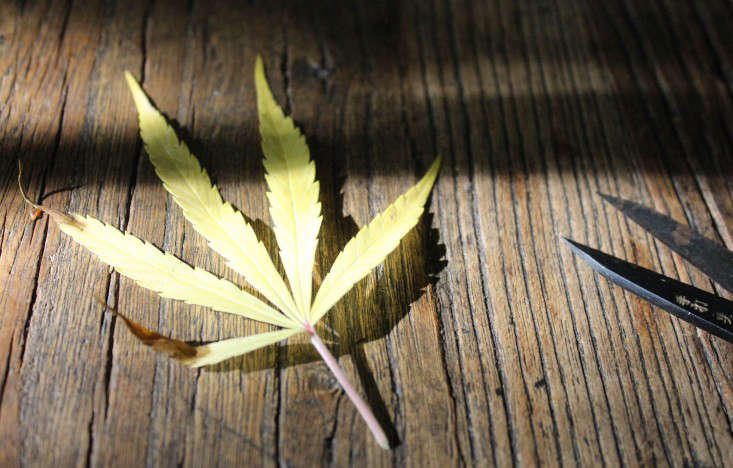 Above: Yellow leaves, removed from my marijuana plant.

“What are you going on about, you bitter little man?” I snapped, somewhat defensively. But as he crept off to find the expensive gin, I had to admit he was right: Where once Cutie had sported a strong, central stalk with a profusion of healthy-looking, spiky, green leaves that depended from tender branches, there now were many yellow or brown leaves. Some were starting to fall off. How had I missed this?

Reflexively, I blamed my wife and her bucket: For some time now, to do our bit in the Drought War, she had insisted that we keep a bucket in the shower, to collect graywater for the garden. My job was to lug the bucket, dutifully, to the garden each day. Naturally, I’d made sure that Cutie was the first among equals in the irrigation department–but maybe soap was getting through to bad effect? My wife said she doubted it. 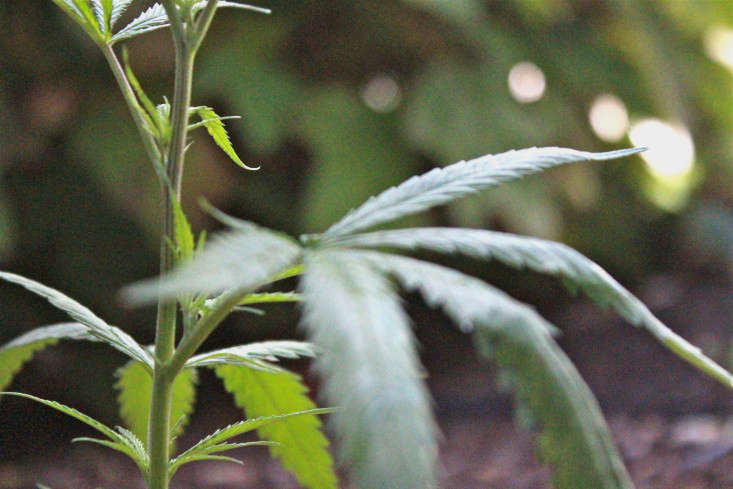 Above: Healthy green leaves on my marijuana plant.

Then I blamed myself. I’d done virtually no research. Weed is a weed. It ought to just grow–and, indeed, at the outset, when I’d sought a modicum of online help, I had Googled “growing Blue Dream,” (Cutie’s specific varietal).  The literature only reinforced my laissez-faire approach. “Easy to grow,” someone named “happyhi” wrote with authority on a website called International Cannagraphic. “Pretty hard to screw up…very hardy plant, good yield. Produces solid nuggets…”

If the leaves continued to turn yellow or brown and fall off Cutie, there would be no “nuggets,” solid or otherwise. Where do you turn for growing tips when what you are growing is marijuana? 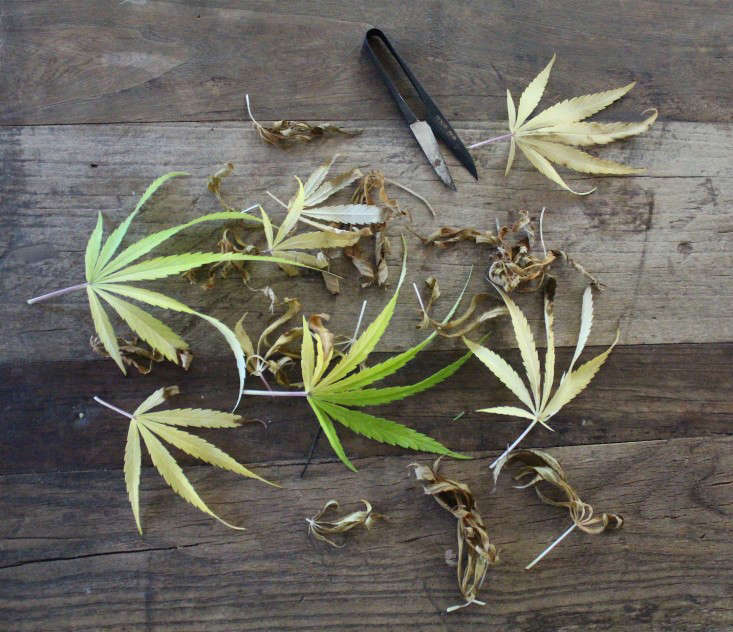 Above: I clipped off all the dead or dying leaves from my marijuana plant.

As you’d expect, there’s more information on the Internet about growing pot than anyone could possibly read–especially people with short attention spans and very dry mouths. The content tends to reside in three types of sites: A lot of it is on old-style, threaded bulletin boards, such as International Cannagraphic and 420 Magazine, where commenters go on and on in a friendly yet informative way. The BBS stuff is mainly stoners writing for stoners, which is to say, their English teachers would be ashamed of their grammar, spelling, and disorganization. Lots of answers (and some questions) trail off, as if the writer got distracted.

The second kind of site that proliferates is more definitive, better organized, and built around carefully tended databases. A great example is Marijuana Growers Headquarters. Sites such as this offer exhaustive articles about all aspects of marijuanaculture, but writers still hide behind nicknames (“Rambo” and “Kram,”  for instance). Rambo said, in a post, that all of them have day jobs that do not involve growing marijuana, though he has been an amateur grower for half his life. So we’ll call these enthusiast sites. 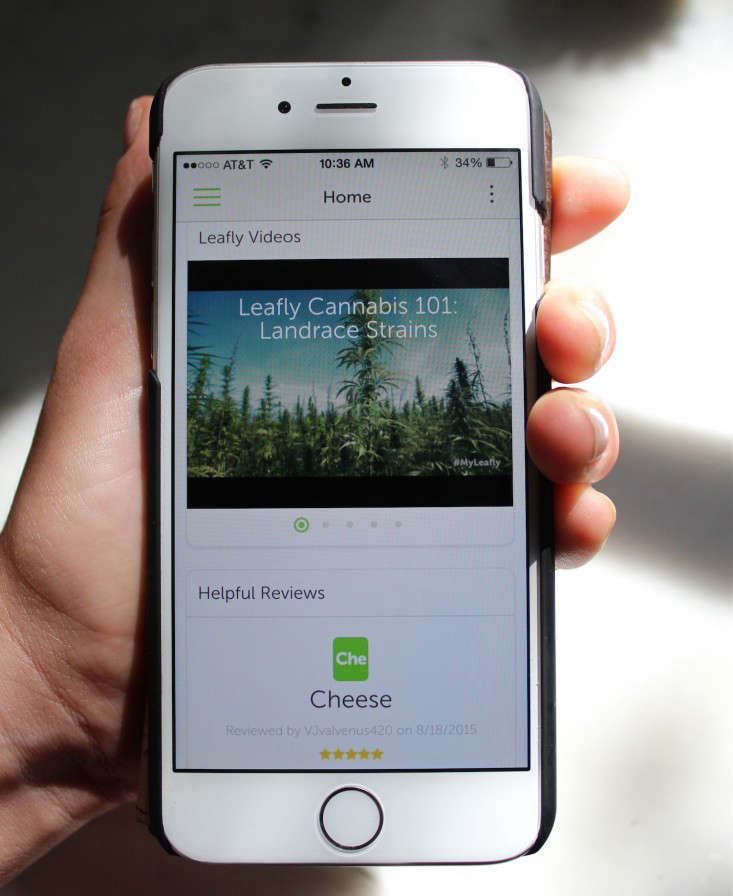 Above: And finally, at the highest end (ha!), are clean, well-lit, beautiful state-of-the-art sites (with apps) such as Leafly, which are decently capitalized and run as legitimate businesses. They methodically provide information on all aspects of marijuana–from growing to consuming–and are tapping into a huge advertising market that’s grown up alongside the grow business (hydroponics, gardening equipment, foods, clones, etc.). Leafly has more than 300,000 strain and dispensary reviews, viewed more than 31 million times a month. 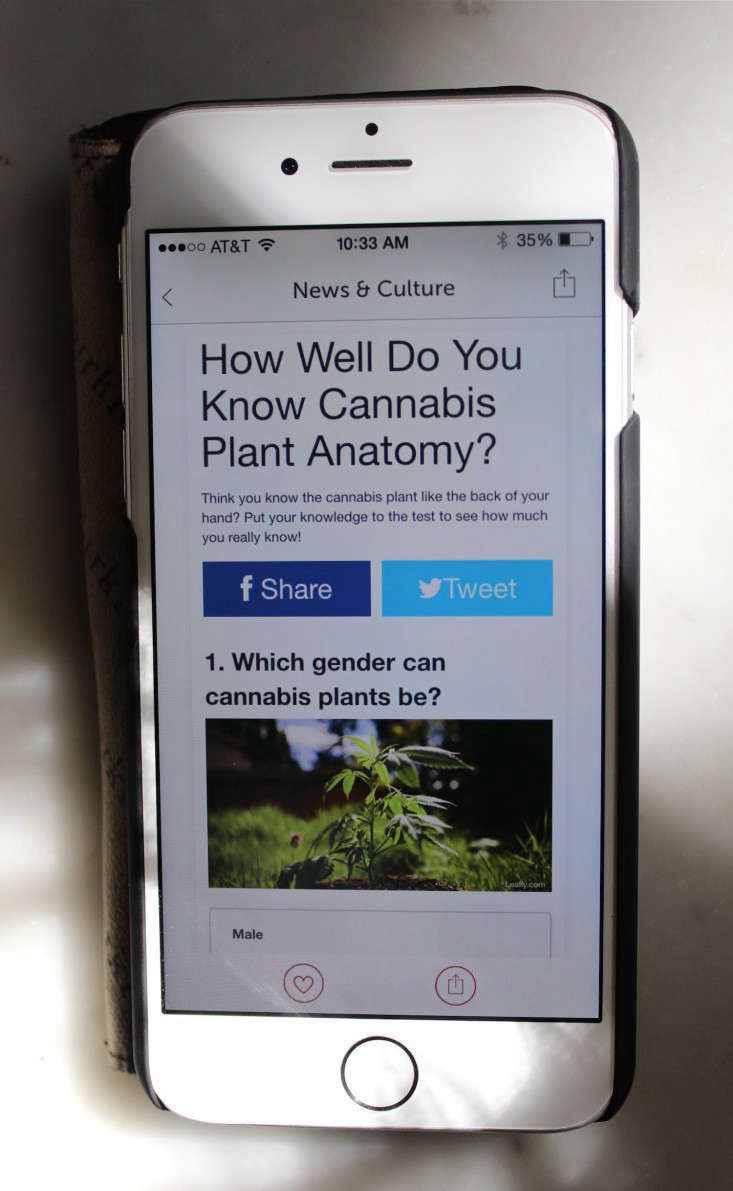 Above: A multiple-choice quiz for Leafly readers.

I found all three kinds of sites useful, and sometimes entertaining, and started to learn some things about being a marijuana grower. I picked up a bit of the grower’s slang–the “main cola,” for instance refers to that central stalk. “Topping” is a technique to snip the cola of an older plant, to produce two mains with more, er, nuggets. But mainly I learned that there was a lot to learn and would likely take years to get a clue. So I resolved to simply get Cutie to harvest, and try again afterward. 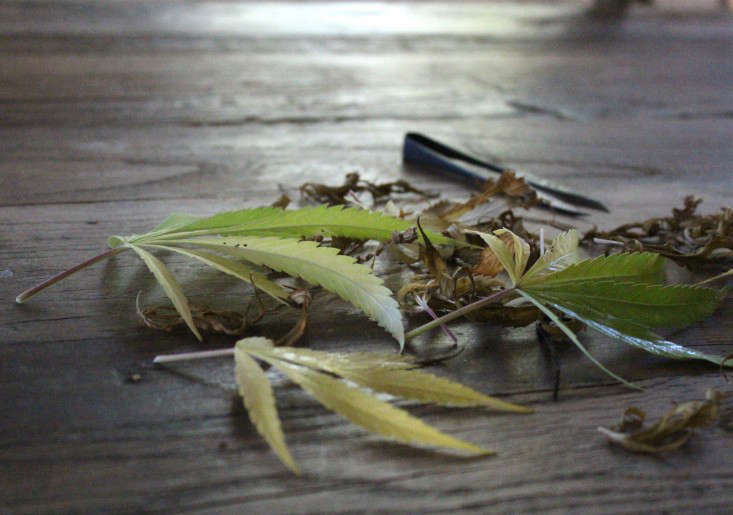 Above: I collected all the yellow and dead leaves.

The yellowing leaves were indicative of a slight nitrogen deficiency–I say “slight” because the plant already had started to bud, moving from the “vegging” or first-growth phase to the blooming phase. Some yellowing is perfectly normal at this point, since the plant is focusing all its energy on making those nuggets, and the old, mature leaves already have made their contribution.

I bought a low-nitrogen plant food, though, to keep the plant healthy, and the yellowing appears to be within the bounds of normal for this stage.

Above: My marijuana plant is starting to develop buds.

The days are getting shorter. It won’t be long before harvest time. I hope we aren’t headed for one of those situations that occur on farms, where a kid adopts a turkey chick, only to freak out when it’s time to chop off its head and eat it on Thanksgiving. I’m getting kind of attached to Cutie and her cola of nuggets.

This is part two of an ongoing series. For the first installment, see My Marijuana Plant and Me: Part I.

Growing your own? See Growing Guide: 11 Essential Tips for Growing a Marijuana Plant.