One of the best things about being a gardener is that we can grow hard-to-find or obscure culinary ingredients and harvest them on a whim whenever our appetites demand it. One of my happiest horticultural adventures has been growing Citrus hystrix, known commonly as makrut and Thai lime. Previously I had to chase down the fresh leaves in specialty markets in Manhattan or Queens, but now they are a windowsill away.

Read on for growing tips and a small discourse on what to call this aromatic citrus tree, and why. 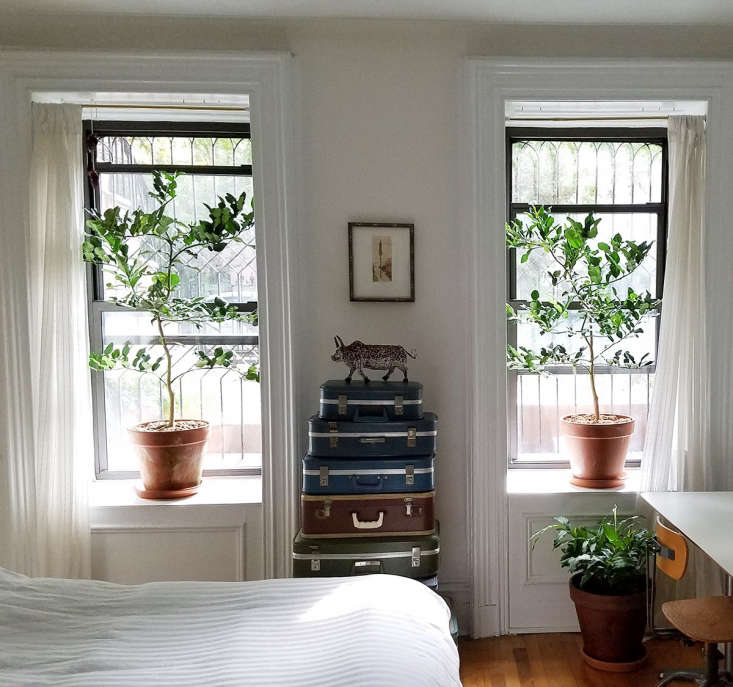 Above: It is late September and I have just brought my Brooklyn-based makrut limes indoors to south-facing windows (despite the fact that a heatwave is making it feel like August). But I will be traveling, soon, and I suspect that nights will be dipping below 50 degrees Fahrenheit while I am away. I do not want my citrus babies to freeze their toes and leaf tips. One tree has set fruit, the other has blossoms, and I am helicopter parenting them on a daily basis.

I knew what I was ordering, of course, from LemonCitrusTree, but two years ago when I opened the very well packaged boxes containing my small trees I could not help an involuntary gasp when I saw this name stamped on the outside. Like ice water down the spine. I was born and raised in South Africa during apartheid. This word was then and is still now used by racist people to address or describe people of color. It is now recognized legally as hate speech in South Africa. The word’s history is older than apartheid, and was originally Arabic, referring to people who were non-believers. But its more recent and exceedingly painful and violent past is, to me, more relevant. I call the fruit by its older common names: makrut or Thai lime.

Several enlightened sources agree. The Oxford Companion to Food (Oxford University Press, 1999) devotes a page to the subject, while the Missouri Botanical Garden’s amazing Plant Finder resource calls it Thai lime and explains why. Modern Farmer has also written eloquently on the subject. What you call it is up to you, but now you armed with the facts. If you feel as strongly as I do, ask growers and nurseries to use the more informed names. It will be an uphill battle, but the more consumers who ask for it, the easier it will become.

Our backyard garden faces north, and as the year tilts toward winter again, the tall shadow of our townhouse looms longer and longer, squeezing the sun out of the garden. In May, when I brought the trees out after their indoor confinement, they basked close to the house in the ample sunshine that flooded the entire yard for six hours straight. But now we’re back into almost full-shade territory.

These are originally forest trees, native to the Southeast Asian tropics and no doubt they evolved in the occasional shade of taller trees. The two things they detest are cold, and wet feet. Cold is relative. Citrus hystrix is hardy in USDA growing zones 10 to 12, and the trees will survive a brief frost. But the trees will also drop their leaves in response. To keep your Thai limes toasty, bring them indoors when nighttime temperatures hit 50 degrees Fahrenheit (they will protest, as editor Michelle Slatalla noted).

The ideal indoor spot is sunny, or at the very least, very bright, but I have seen citrus overwinter in cool basements with little light. About the wet feet: Water your Thai limes deeply, until the water runs freely from the drainage hole. But if the potting medium stays soggy and does not drain well, their roots will rot. This will happen slowly and sneakily, and is far harder to remedy than a tree that is too dry. Indoors I water my trees once a week, deeply. The water that collects in their saucer is sucked up within 24 hours. Outdoors, they are watered more often, as they are not standing in saucers, and so the extra water just runs away. Check for scale or spider mite indoors, and remove by hand. I spray my plants with Neem solution every two weeks for scale (just wash the leaves before use, in this case). I also mist the trees in the driest-air months of January and February, from a squirt bottle.

I have since learned that this looked cute but was unnecessary. The bees did an excellent job, outdoors. I might repeat the exercise indoors, although, since limes are self-fruitful and the flowers crowd in such close proximity, airborne pollen might just do the trick.

I am going for compact, leafy trees, and if the shoots emerge in a good spot, they stay; if they do not, I nip them off (the soft leaves are great in Thai salad dressings). Outdoors, new growth will turn red in abundant sunlight—it is a protective response.

After this I cannot upgrade their pot size again, and I foresee some root pruning, in the future. Pruning the roots of a tree that is actively growing is dicey, and I will allow them to stay outdoors much later next year, so that they become cold and growth slows into dormancy. Then: snip, snip. The potting medium for citrus is important. I use a lightweight organic potting mixture, but I add one-third of coarse and shredded cedar mulch. Small wood chips would work too. This helps them drain exceptionally well and keeps some airflow around roots. While I began to fertilize with slow-release Osmocote, I have switched to Espoma’s Citrus-tone, since all my other gardening is organic.

A single leaf in a gin and tonic perfumes the whole glassful. And covering a bunch of them with gin (or vodka, or water, for that matter) gives you an intense lime infusion that makes fantastic drinks. Southeast Asian curries and sauces benefit from a single leaf, and I love to chiffonade half a leaf very, very finely, to add to raw vegetable salads dressed with a mixture of lime juice, ginger, sugar, and fish sauce.

Now if only I had the space for a Meyer lemon, too.

N.B.: Are you a convert to indoor citrus trees? Here are more tips:

Can This Garden Be Saved: 'My Vegetable Garden Looks Messy'

14 Things Nobody Tells You About Indoor Citrus Trees

A Movable Garden: Saying Goodbye to a Brooklyn Backyard