When Marni Leis moved to Northern California 30 years ago, she experienced culture shock, at least when it came to the local architecture. Mill Valley, where she settled, was known for being “that hippie town.” It was the former home of such artists as Jerry Garcia, Janis Joplin, and Jack Kerouac (who once lived in a hillside shack). At first glance, it had what someone from another coast might describe as a rundown look.

Avoiding the cottages with peeling paint, the front-yard Buddha statues, and the rusted Volkswagen buses on cinderblocks, Marni moved into the biggest, most solid-looking brick house in town, which happened to be the former public library. And then a funny thing happened. “Four or five years later, I finally started to understand Mill Valley,” she said. “And so I bought a different house.”

The old wood-sided cottage that Marni moved to next–and where she still lives–is tucked away on a winding, narrow street (it’s technically two lanes, but I drive a Mini and I still wouldn’t try to pass someone coming the other way). She painted the house dark green to match the leaves on the trees and set to work creating the sort of garden where shade reigns, texture and form take the place of color, and the war against the neighborhood deer has been cheerfully lost.

And at night? Year-round, strings of tiny, starry lights outline the massive live oaks. A five-armed chandelier hangs from a branch and, glowing like the moon (if the moon dripped crystals), makes the garden feel like a party. The other night we decided to drop by:

Photography by Tom Kubik for Gardenista. 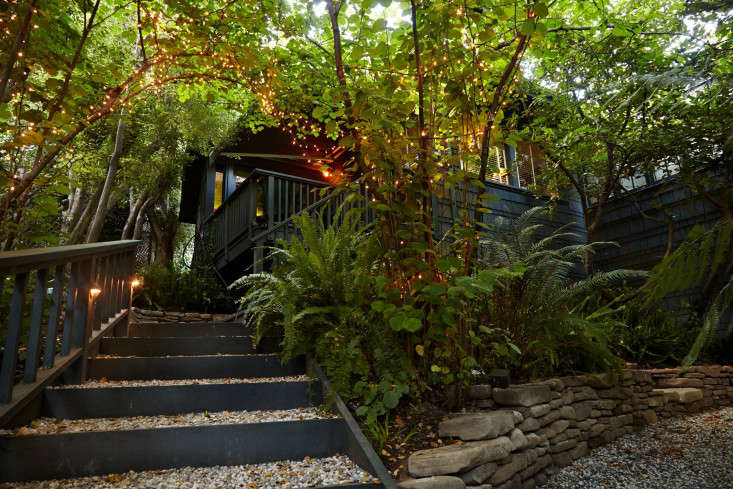 Above: Marni’s front walk is lit by strings of lights draped casually in the trees. The light-colored gravel paths and stairs are a recent addition. “I’m rediscovering the front yard because the light gravel lifts the dark space visually,” says Marni, an interior designer.

Before the gravel, the paths were stone. “We reused the stones to border the beds and make low retaining walls,” says Marni. 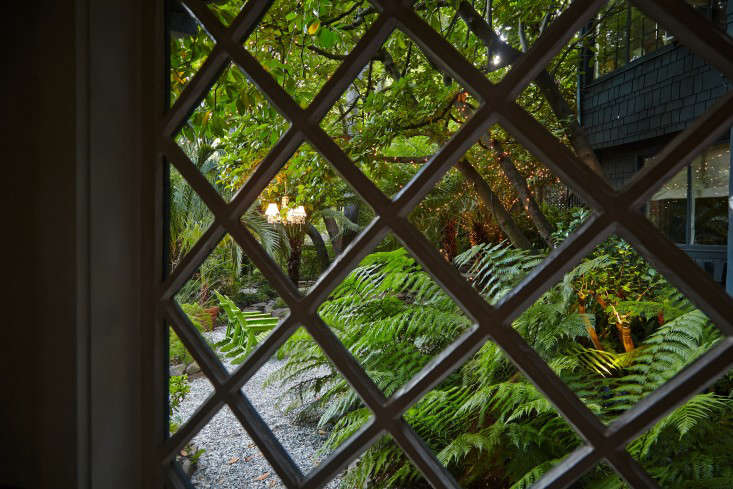 Above: The view through a cottage window: Tasmanian tree ferns line the walkways and edge the beds. Marni found the vintage window at a salvage yard in the city and painted it the same green as the house, the garage, and the fence. (“It was a Benjamin Moore color that they discontinued, a green that had a lot of blue in it,” she says.) The color creates a uniform backdrop for the garden. 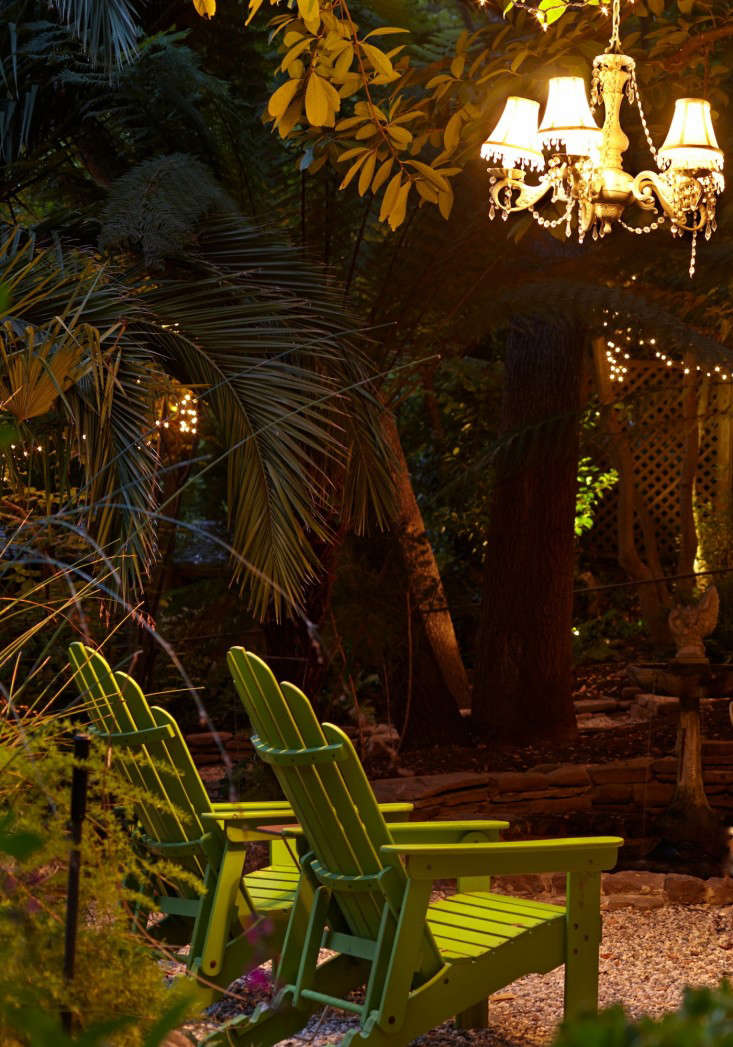 Above: A pair of Adirondack chairs sit beneath the chandelier in the front yard. 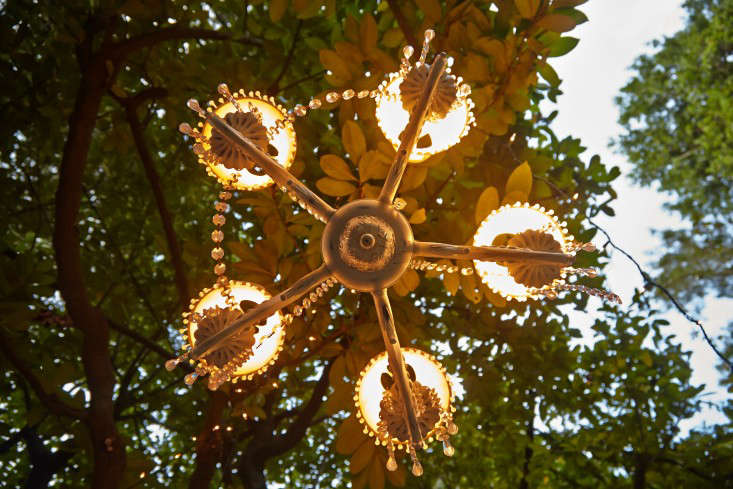 Above: Marni and her stepson are co-owners of Joe’s Taco Lounge, a Mill Valley institution she decorated years ago in a riotous style best described as Day-of-the-Dead-Meets-Thrift-Shop. On the restaurant’s tables are retro fruit-pattern oilcloths. On the walls are religious statues, framed pictures, old signs, strings of colored lights, and shelves of more bottles of hot sauce than can possibly exist. And yes, there’s a chandelier. “It’s been like that since 1987, or maybe 1989, and we can’t change a thing,” she says. Regulars complain if so much as a bottle of hot sauce goes missing. 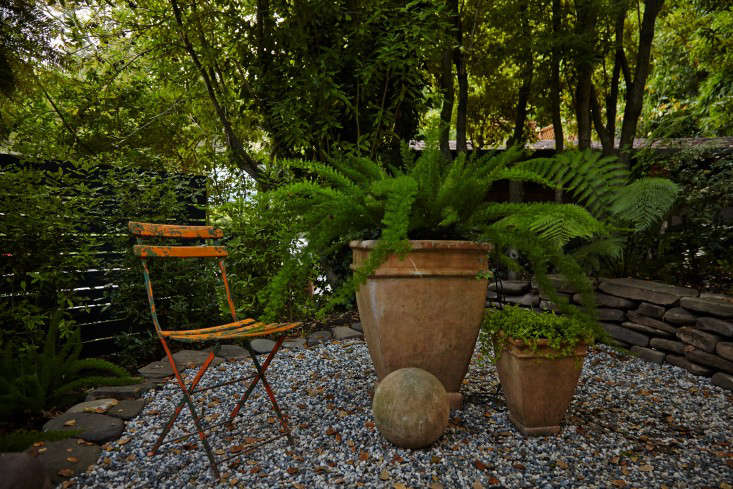 Above: A shady corner next to the front walkway is a good vantage from which to contemplate the rest of Marni’s garden. 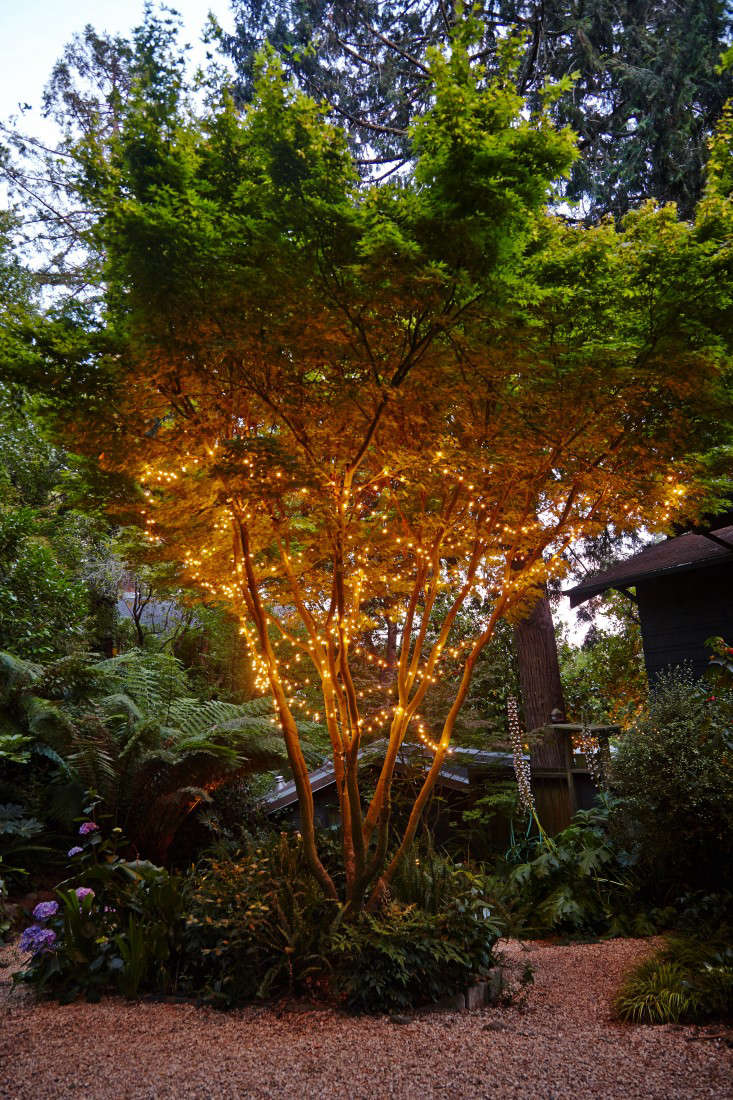 Above: In the backyard, more strings of light create a bonfire effect. “Party lights are more effective than garden lights, which always break down,” says Marni. How many strings does she recommend for an average-size garden? “As many as possible.” 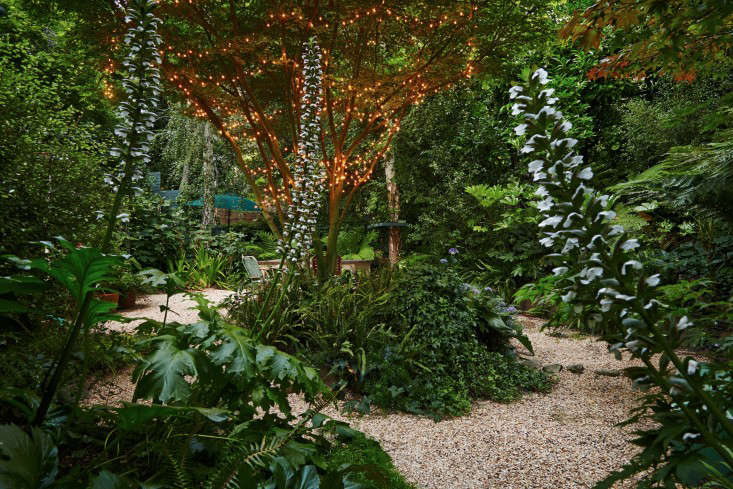 Above: Marni’s tips for a successful garden: Keep your plant variety down (“Two types of ferns next to each other looks messy; one type looks intentional,” she says), and plant in drifts rather than clumps. 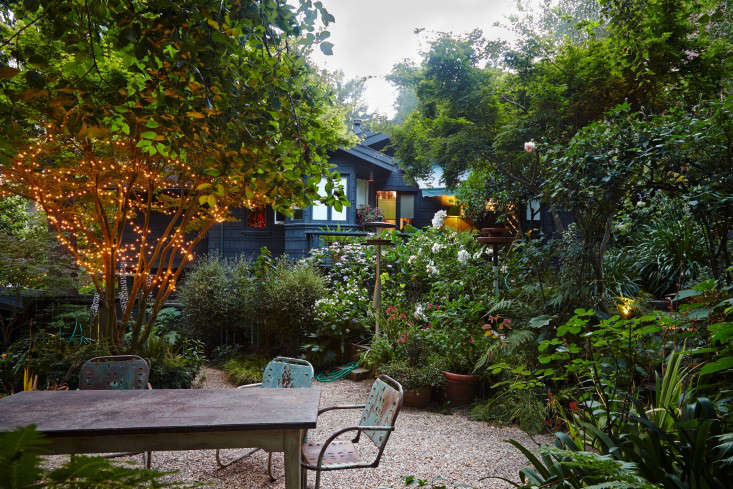 Above: A dining area in the backyard. “We have microclimates in Mill Valley, and the backyard is much warmer than the front,” says Marni. “So this is where we eat outdoors at night.” 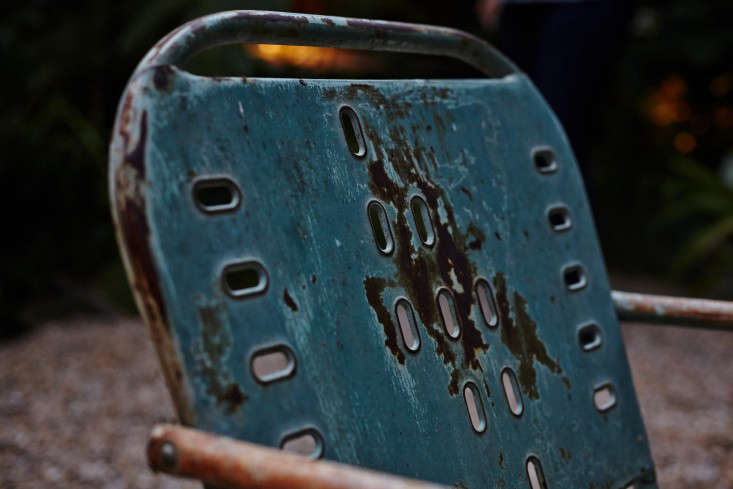 Above: Marni collects vintage garden furniture; she found this chair at a local flea market. 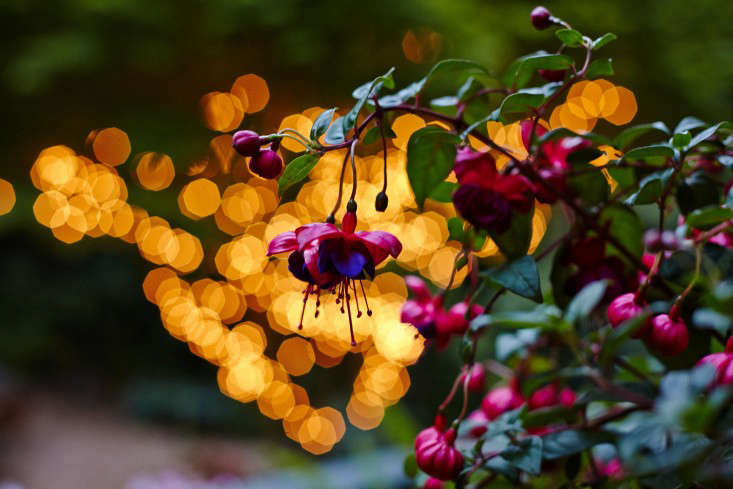 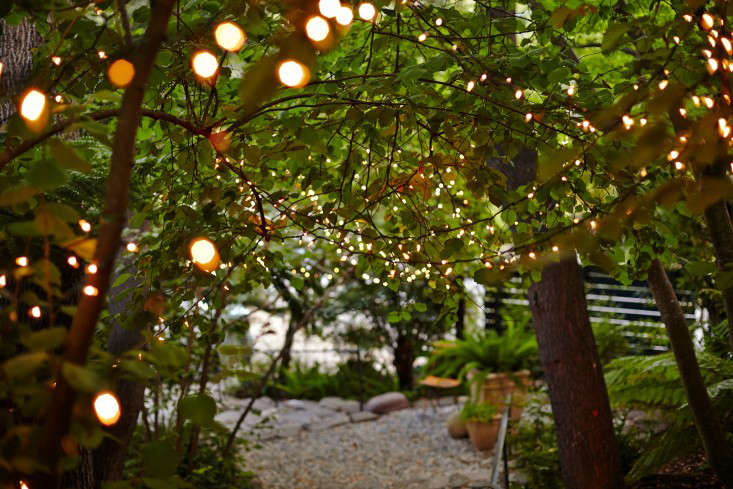 Above: In the background, a half-fence made of wooden slats separates the front yard from the street. Marni isn’t a fan of high stockade fences. “I don’t want to live like that,” she says. “I’ve planted so many things the deer have eaten. Anything that survives? I buy more of it.” 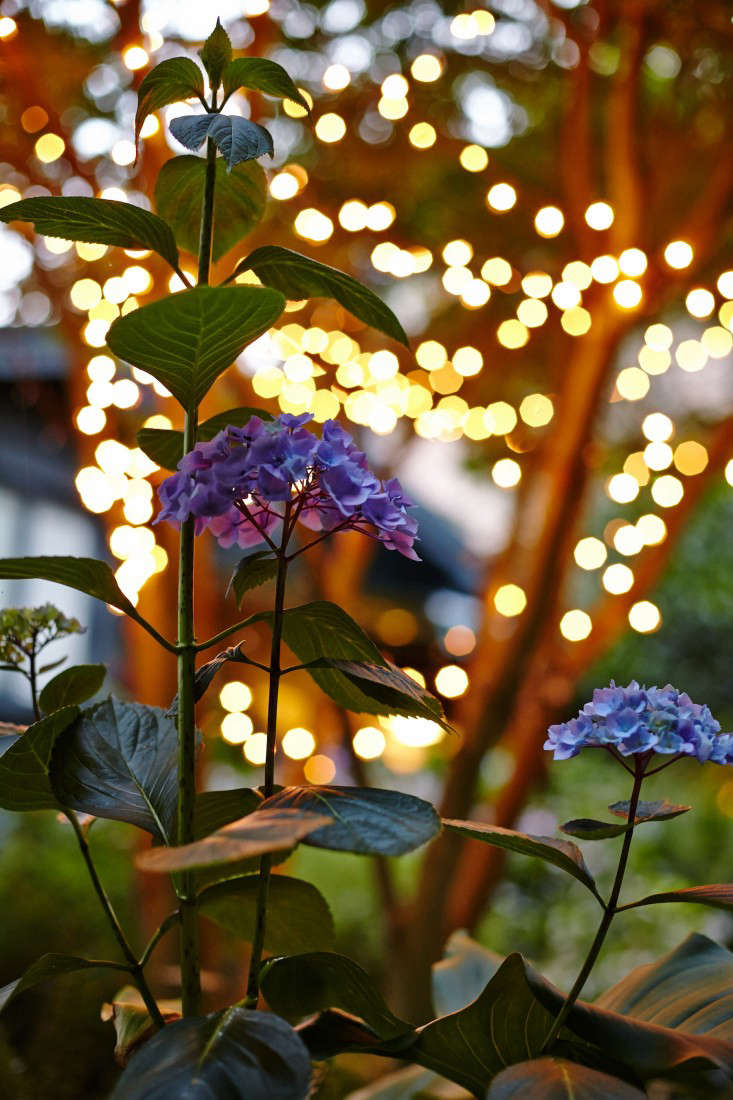 Above: Deep purple hydrangeas in the backyard. 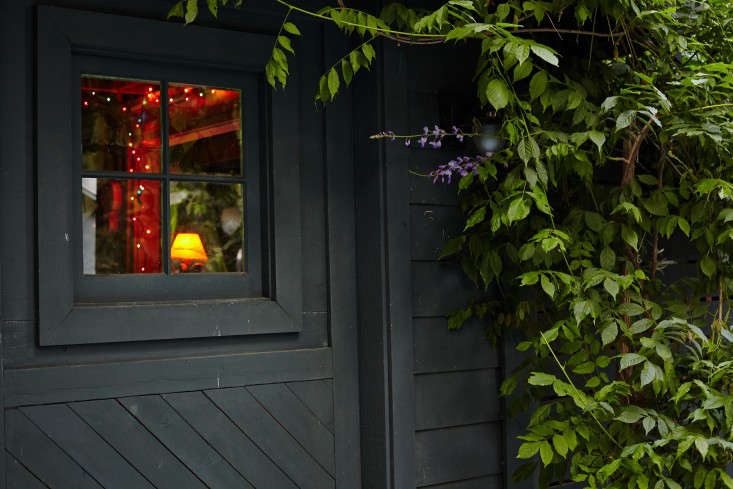 Above: Wisteria guards the side door on the garage. 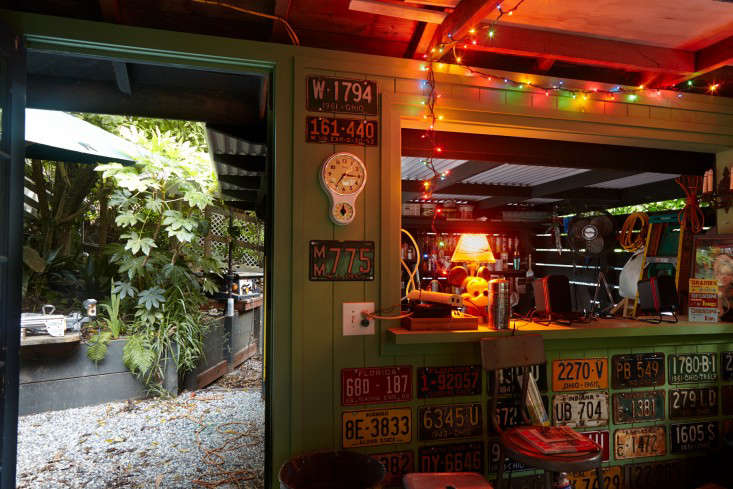 Above: Inside the garage is the workshop of Marcy’s husband, John Black. 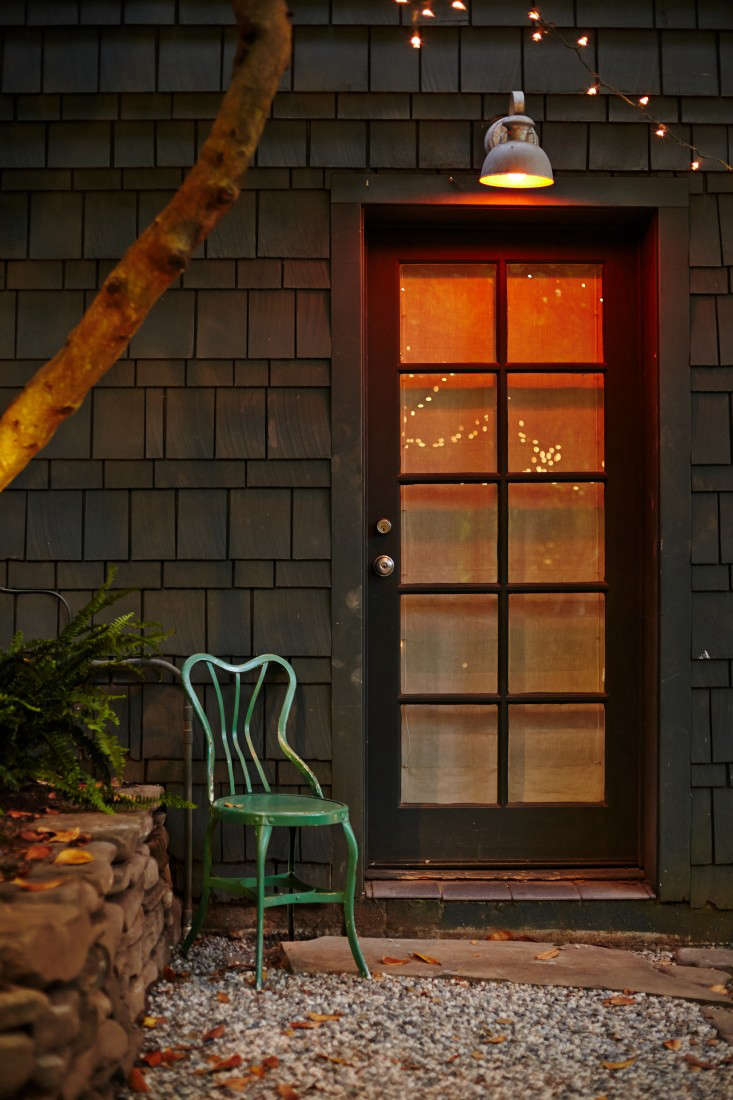 Above: The ground-floor guest entrance leads to quiet quarters.

For more Mill Valley gardens, see Garden Visit: The Hobbit Land Next Door and A Garden with No Obstacles in Mill Valley.