“I’m someone who likes to be busy,” says British garden writer Sarah Raven. A former doctor, she applies a rigorous logic to creating loveliness, and the results are anything but clinical:

Even though Sarah Raven’s life is complicated—writing gardening and cookbooks, teaching courses, selling her seeds, carrying out plant trials and training her forensic eye on the whole business—she likes to keep her methods simple. Follow her technique to recreate a spring bouquet. 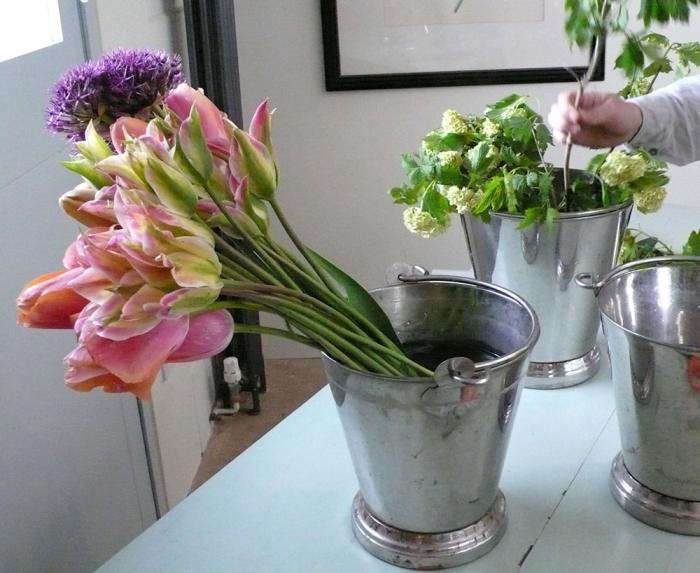 After starting her business as Sarah Raven’s Cutting Garden (writing an award-winning book while creating said garden), she set her sights on vegetable growing and the writing of another seminal book. She also writes cookbooks. The business is now called Sarah Raven’s Kitchen and Garden and she is indeed very busy. She is also a very good florist though her bunches are not for sale: they are for teaching and enjoyment. Her shabby-chic country style of local, in-season flowers has played an important role in the renaissance of the British cut flower industry. 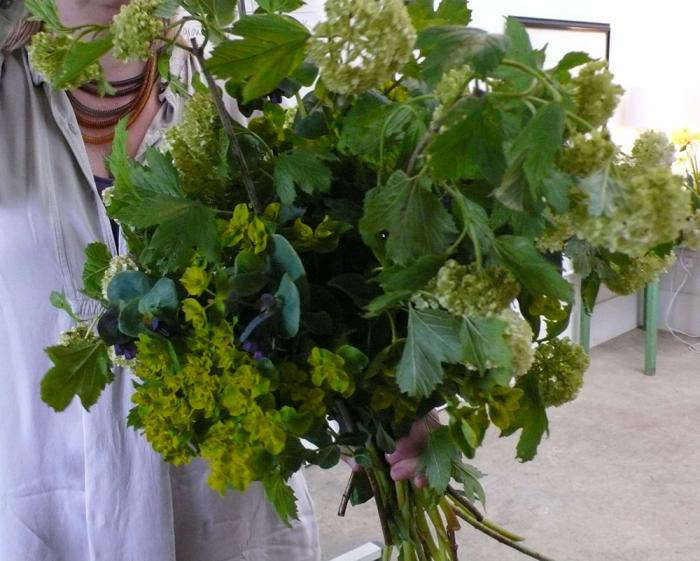 Condition the foliage plants’ stems by searing them in boiling water for 20 seconds (40 seconds for the woody stems of viburnum) to prevent flopping.

Next, create a “sieve” by putting together several of the same type of foliage plant with a good branching structure such as euphorbia oblongata, shown here. Drop in the other two foliage elements (perhaps cerinthe followed by viburnum) so that they hang through like spaghetti in a sieve. Gather together with your hands. (This technique works better than the traditional spiral-stemmed bunch, which is difficult for women to achieve, believes Sarah, and was surely invented by head gardeners who were men with larger hands.) 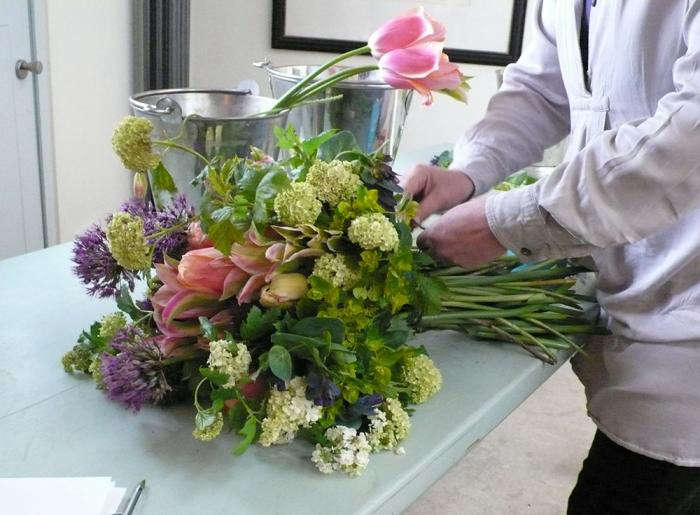 Above: It is important that a bunch has a “heart,” with flowers pulled in closer to the center, and a “horizon.” Some flowers should poke out of the top in a slightly raggedy way “for a relaxed, country-style bunch,” says Sarah. “A lot of florist-style, bought bunches are just too neat.” When the foliage plants look good enough to display on their own without flowers, move on to the more precious elements, “the icing on the cake.” 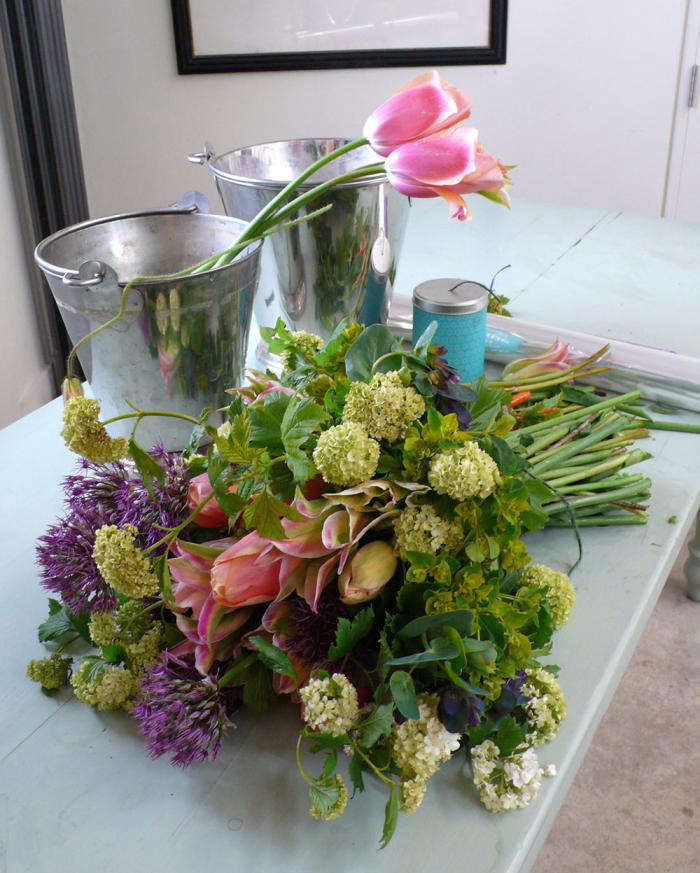 Above: Drop the flower stems one at a time into the sieve of foliage plants and pull them through, resisting the urge to be too neat.

Sarah used two types of tulip (Menton and Florosa) and an allium (Purple Lane) for this hand-tied bunch. Tulip Menton (as seen in the vase above) is the show-stopping element. Sarah calls this the bride.

The bridesmaid, on the other hand, backs up the bride but does not compete with her. She is the same color but a different shape and not as showy. Tulip Florosa is a very handy tulip as it has some green in its petals, a sign that it is more reliably perennial in the garden; a cross between the green-flashed and lily-flowered tulips.

Next comes the gate crasher, allium Purple Lane, which prevents the affair from becoming too polite. Contrasting strongly with the tulips, it makes everything crackle. 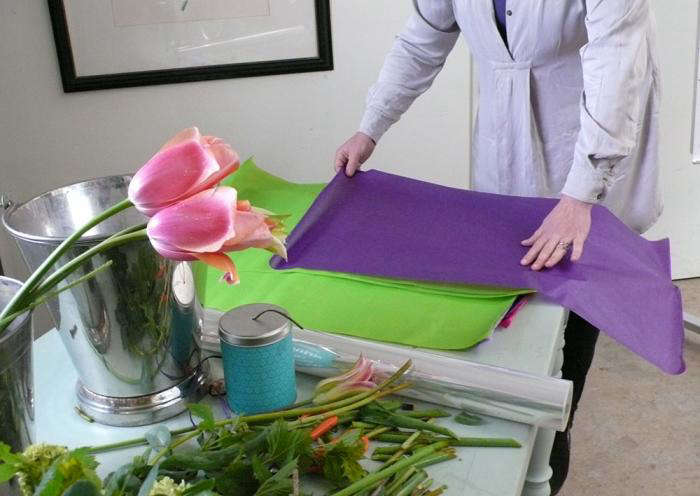 Above: A special knot is tied around the bunch. A double length of twine is tied round, with the two ends threaded through the loop and one end sent in one direction, one in the other, with plenty left over. The stalks are trimmed, so that the bunch is dead-straight at the bottom and it is wrapped in three sheets of waterproof tissue paper. 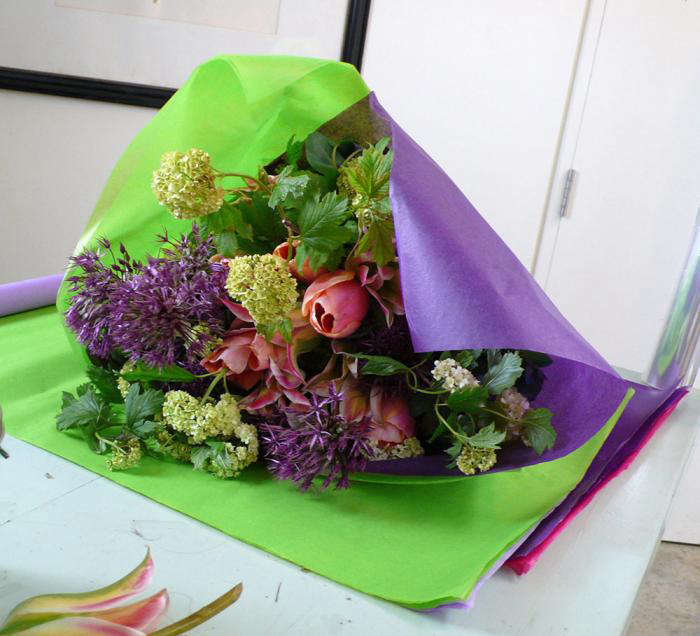 Above: Almost done. Rip cellophane from a roll by standing the roll up, making a nick at the top and yanking violently down, so it comes away straight, as though cut by scissors. Place the bunch in the middle of the cellophane; thread the twine through to secure. 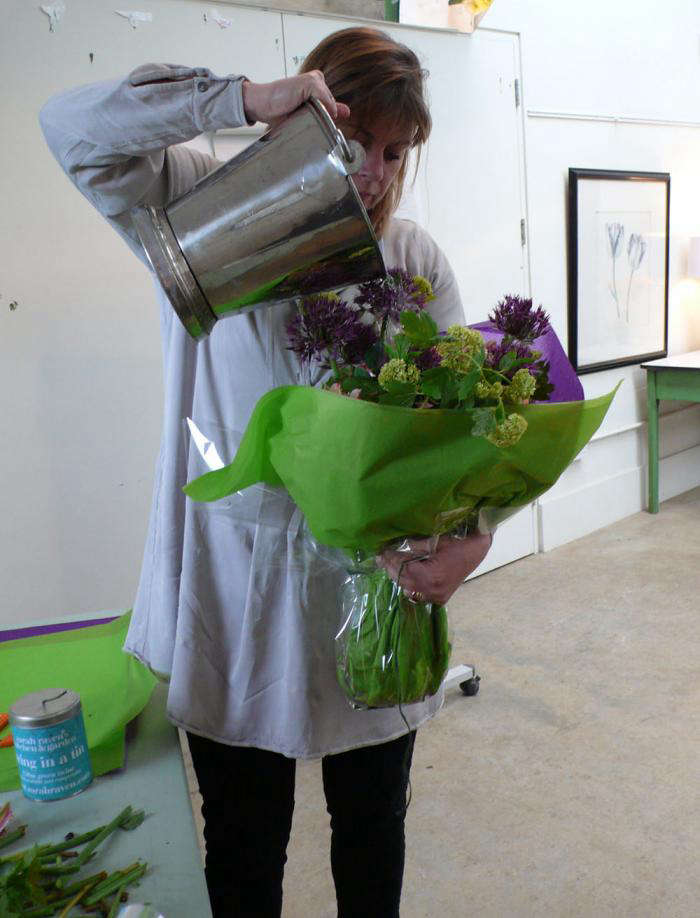 Above: Pour a jug of water into the middle of the bunch. With the aid of the straight stems at the bottom the bunch should stand up all by itself, without sogginess, or the need for a last-minute search for vases on the part of your host if you are giving it as a gift. 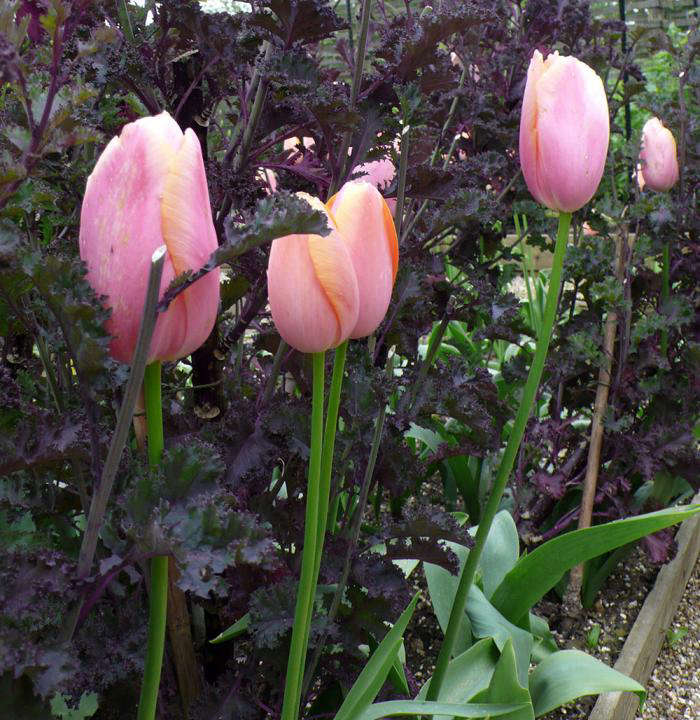 Looking for a quick, easy way to dress up a pot of store-bought muscari? See DIY: The Ultimate Disguise.

Miracles Do Exist: 5 Ways to Banish Computer Cords from Your Home Office