The Garage Garden at the Chelsea Flower Show is one of the most photographed and shared gardens this year. It addresses a universal problem (living with cars) in an irresistibly joyous way. We take a closer look: 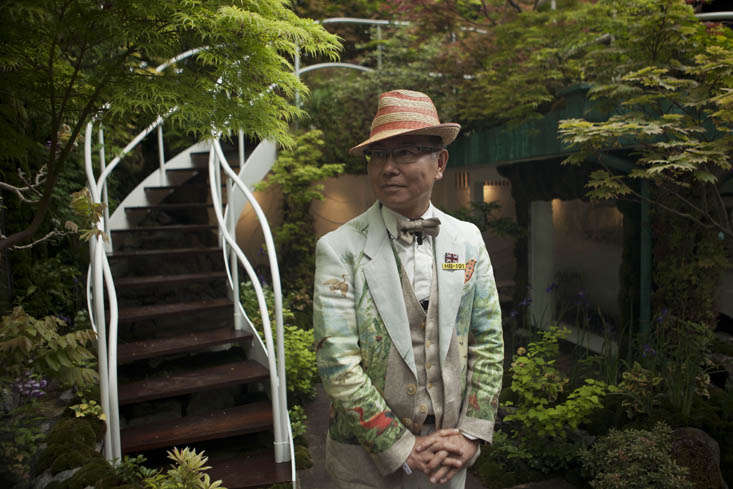 Above: Mr. Kazuyuki Ishihara is a fixture on the Artisan Gardens at the Chelsea Flower Show. Horticulturally and sartorially, he keeps the bar permanently raised. Ishihara also has a unique approach to  collecting his awards for Best-in-Show (which he won three years consecutively before 2014). As the all-Japanese team runs on stage, yelling like Maradona in the 1994 World Cup, the mainly British audience tends to look on in stunned bemusement. 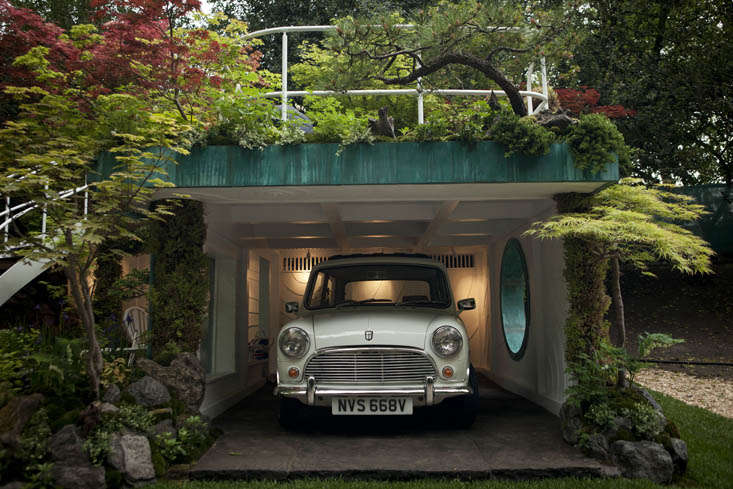 Above: The Garage Garden, or Senri-Sentei. The awards ceremony during Chelsea week highlights, in a superficial way, a difference in Eastern and Western culture, which has sometimes worked against Kazuyuki Ishihara. Although people like what they see, they don’t really know what they’re looking at, and this includes the judges.

This year it’s slightly different, since he has created a habitat of peaceful coexistence between human and car, whether the latter is a classic model or not. We can all relate to that. 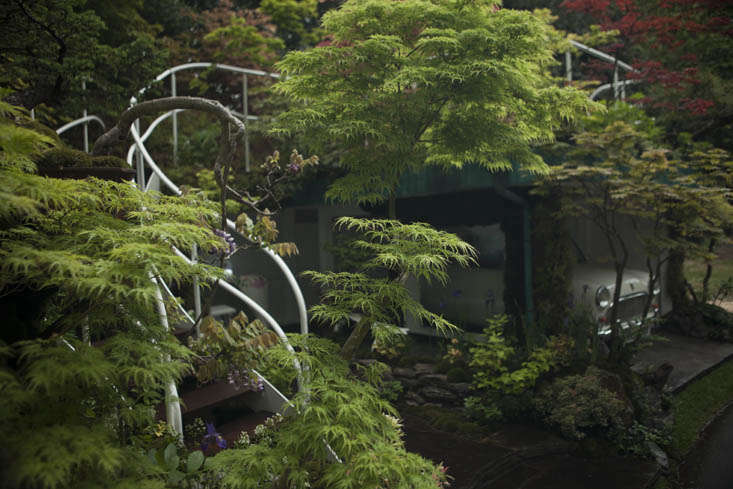 Above: Ishihara’s way with plants extends to hardware. This flight of mahogany steps, offset with swirling white railings, has the feeling of an ocean liner on a Busby Berkeley film set. The white interior of the building is also immaculately considered, with embossed swirls adding to the Art Deco feel. 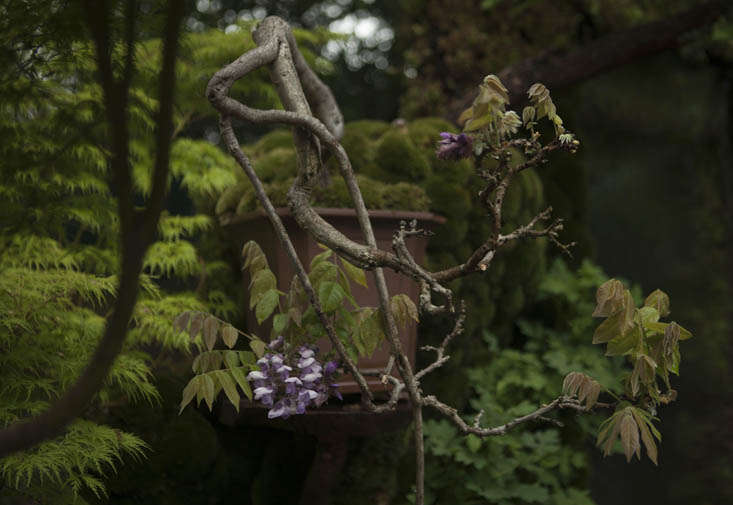 Above: Ishihara likes to tightly fill a small space, making it seem bigger. Details encourage lingering and further looking; this bonsai wisteria provides a crazily wonderful eyecatcher on the way up to the roof terrace. 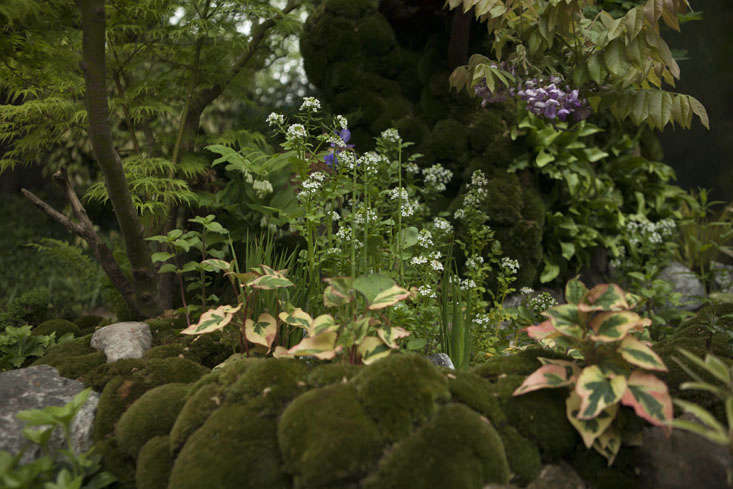 Above: Signature moss on the Senri-Sentei garden.

For the Satoyama Life garden in 2012 (roughly translated as “mountain in the countryside”), Ishihara molded moss into 10,000 balls. In an interview with the Japanese Embassy that year he was asked whether he was ever frustrated by a lack of understanding among the London judges for what he was trying to do. “It has been difficult to make them understand what moss means to us,” was his reply. 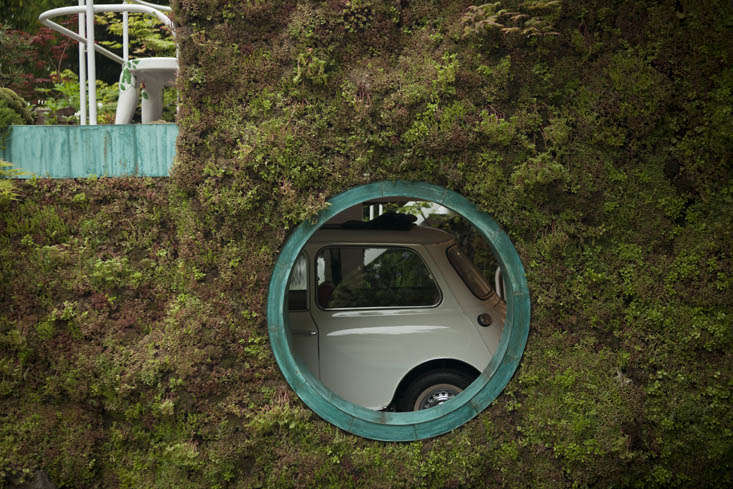 Above: Verdigris copper lines the roof terrace and the round window at the side of the structure.

Moss responds well to tweezer treatment and thrives in the humidity of Japan. The concept of beauty in moss is still fairly alien in the West, though vertical greenery has been embraced with more enthusiasm. 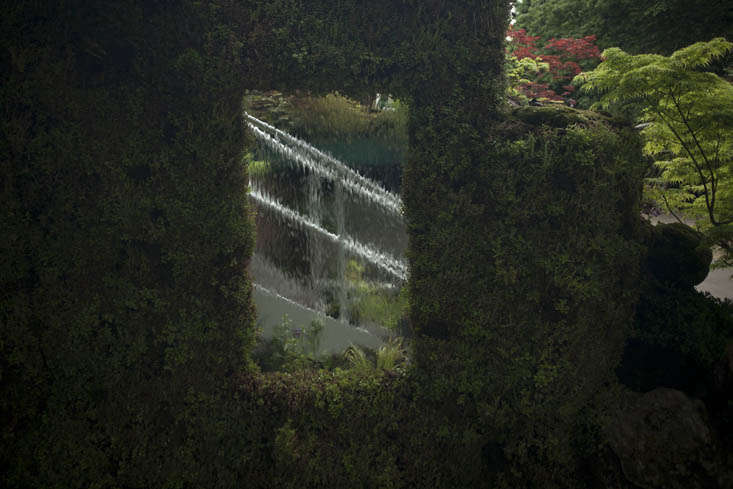 Above: One of two window fountains which add light and movement.

Every garden designed by the Ishihara Kazuyuki Design Laboratory for Chelsea is value-added, since it is not only densely planted from top to bottom, but is just as intriguing at the back and sides as it is at the front. 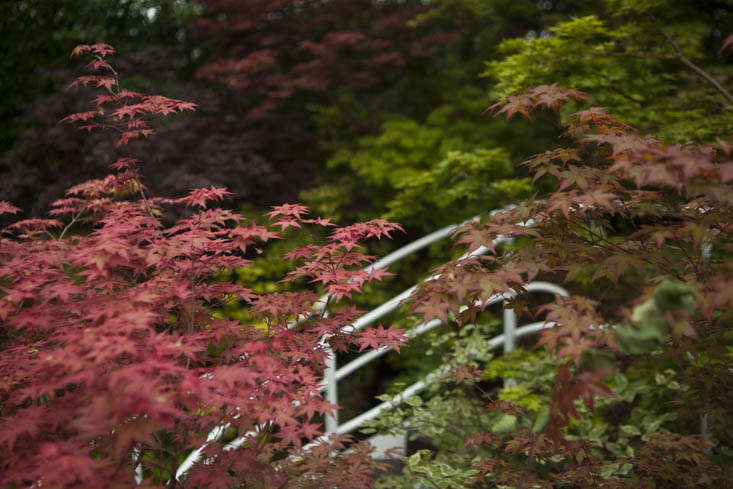 Above: Specimens of Japanese acer provide the base notes of color in shades of green and ruby red. Many plants were grown for the show in Europe, including the Japanese Garden Centre in Kent.

Kazuyuki Ishihara was born in Nawasaki in the late 1950s. His 2014 show garden Togenkyo (A Paradise on Earth) was inspired by the stories that his father told him as a boy, based on the fabulous Japanese countryside, pre-Atom Bomb. Togenkyo is also a fabled place of peace and respite, where people go to forget their troubles. They must soak up as much of the experience as they can on this visit, since it will never be repeated. Which brings us back to these affecting yet very temporary show gardens. 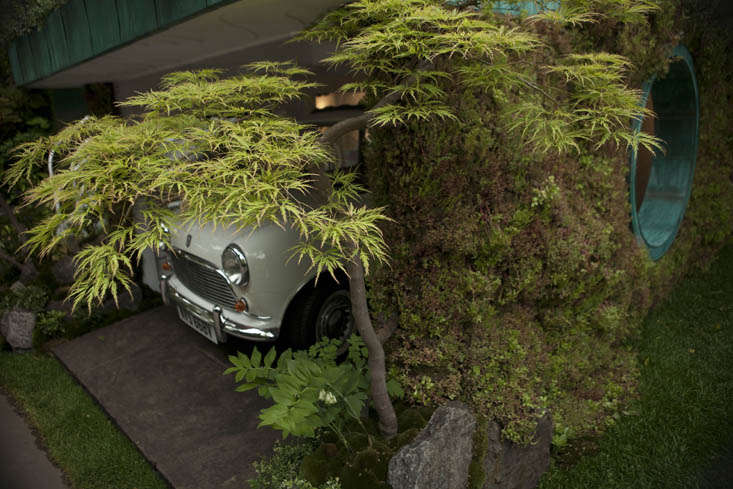 Above: With layers of brilliance within a limited setting, the stories that Kazuyuki Ishihara tells with his gardens are a way of expressing what he sees as the spirit of Japan.

For more of Kendra’s coverage of this year’s Chelsea Flower Show, see:

In collaboration with: Casper's Perfect Mattress (with a Gardenista Reader Discount)