There are people who refuse to use the bathroom if they are not at home, and I used to think they had a problem. That was before I ventured into the guest bathroom at a dinner party and a toilet paper holder tried to kill me.

Bad bathroom design is a widespread problem. If you Google “toilet paper holder,” you will get 1,050,000 results, and about 1,049,999 of them will be ugly or poorly made or wildly expensive (or all three). The average American spends 30 minutes a day in the bathroom–and one in four of us spends upwards of an hour in there, by the way. Yet of all rooms in the house, the bath is most likely to be the repository of after-thought accessories that seem as if they designed specifically to be locked away in a medicine cabinet where no one has to look at them. Why? 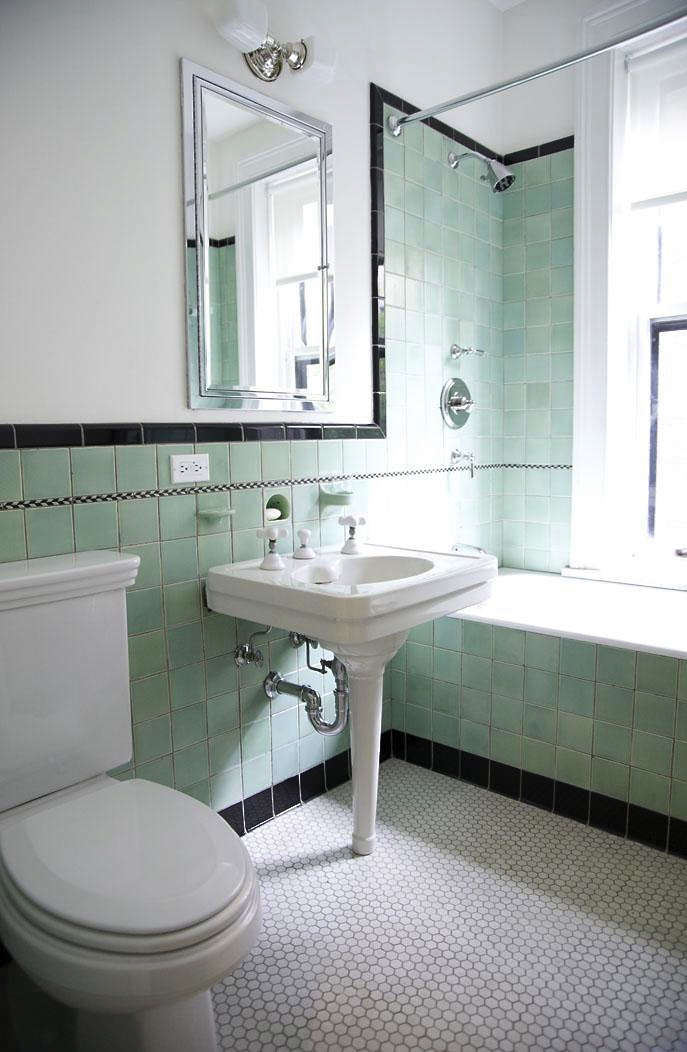 Above: A restored bath in a Brooklyn house designed by Elizabeth Roberts (for more, see A Brownstone in Brooklyn, Reborn).

When the toilet paper attacked me, I was minding my own business when–suddenly–it fell off the wall with a clatter. One of the brackets flew into the dark nether region behind the toilet. The other wall bracket dropped on my foot, and the spool of paper rolled away, unfurling itself as self-importantly as patriotic bunting on the Fourth of July.

The commotion did not go unnoticed.

“Are you OK in there?” the hostess called from the other side of the door, where she stood rattling the handle.

No, I am not OK. I am shaken to the quick by the realization that it is not safe to use someone else’s bathroom, where you are at the mercy of their bad fixtures. Not that I am blaming the hostess; she’s a victim too.

Above: The classic, ingeniously simple Thomas Hoof Porcelain Toilet Paper Holder (above) with a slot through which you can pull paper; it’s €22.

Bathrooms are by and large overlooked opportunities for good design, says Josh Owen, an associate professor of industrial design at the Rochester Institute of Technology.

“The vast majority of products in this category have been addressed from the standpoint of tools and hardware,” says Mr. Owen. That attitude leads to designs that look best if you don’t look at them.

There are exceptions to this rule, of course, including the Thomas Hoof Porcelain Toilet Paper Holder. It’s also one of the most popular products we’ve ever featured on Remodelista, if our readers’ reaction on Pinterest is any indication. More than 48,000 people have either pinned or re-pinned the photo.

So why isn’t it sitting on the shelf at every bed and bath shop and big-box store in America? I know a dinner party hostess who needs at least one, immediately. And I’ll take three, for my house. But unless we want to fly to Germany, where the Thomas Hoof toilet paper holder is manufactured, good luck with that. Here in America, the selection veers more towards the sort of products that fall off the wall and strand unsuspecting guests in your bathroom.

“This is a problem on several levels, both from the perspective of aesthetics and the more obvious need for immediacy of use,” says Mr. Owen, who has designed a line of attractive bathroom accessories–including a toilet brush, plunger, and garbage can–for NY-based Kontextí¼r. 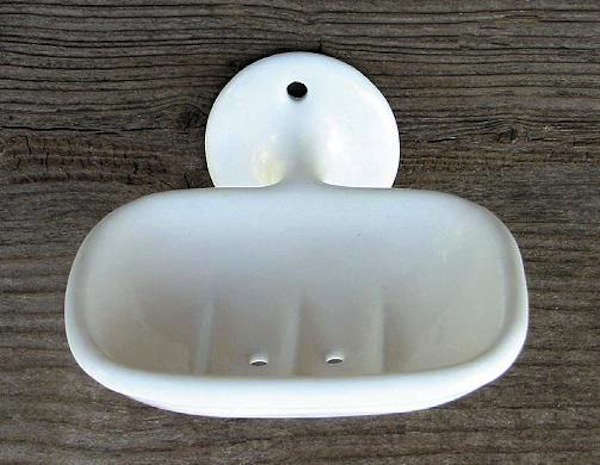 Above: A Soap Dish with Hole is enameled cast iron; €39 at Replicata.

Why do I think bathroom design matters so much? (I am asking this in the tone I imagine would be used by my friend Amy, a serious person who writes about world affairs and third-world poverty and who probably has never noticed what kind of toilet paper holders are in her house.)

It’s simple, Amy. It’s not really about the toilet paper holder or the plunger or the soap dish. It’s about solving a problem. It’s about having the right tool for the job. It’s about transforming something mundane and rote and sort of dead-feeling–the day-after-day tedious moments of routine–into something pleasant and satisfying. If I am going to clean a toilet (and yes, I am going to clean a toilet pretty much every week of my life), then I should have the proper brush, with a nice handle and a weighty heft to it, to get the chore done. There is a purity to any useful object that represents the perfect iteration of itself. A toilet brush that cleans well and looks beautiful and lasts like iron? To create it elevates civilization. 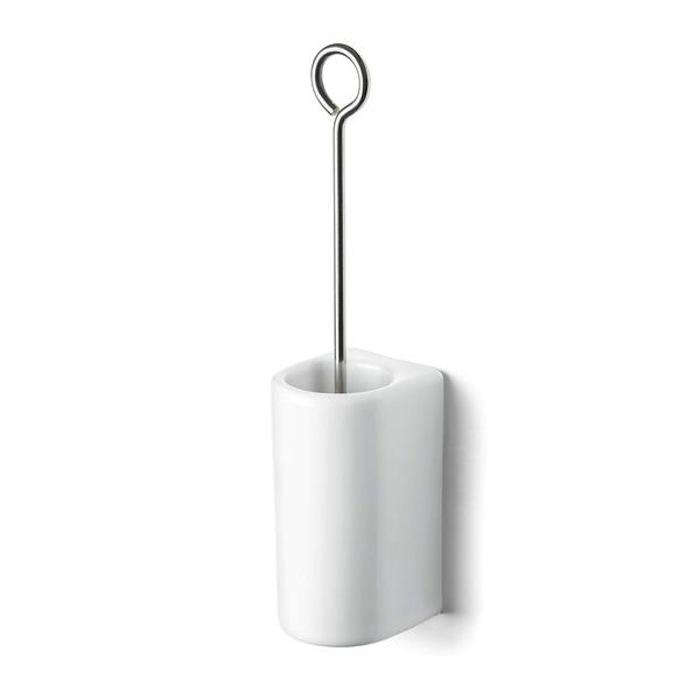 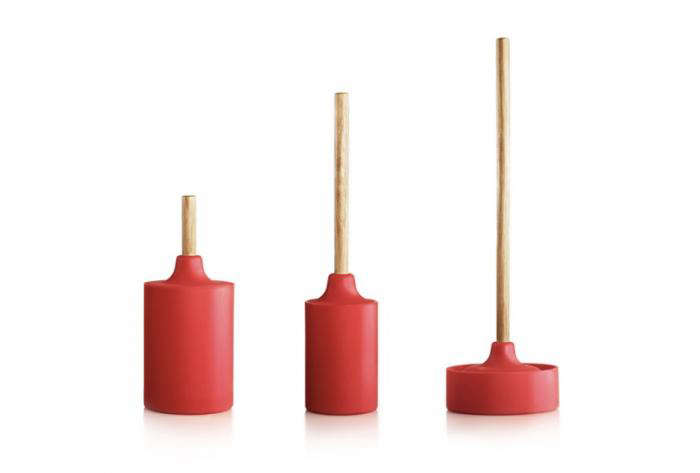 There is possibly more good design on the horizon. Mr. Owen’s line, made of wood and silicone rubber and featuring welcoming circular shapes, may expand. “We have discussed accessories for the Hanging Line such as brushes and cups and the like. We have also discussed the notion of storage and display,” he says. 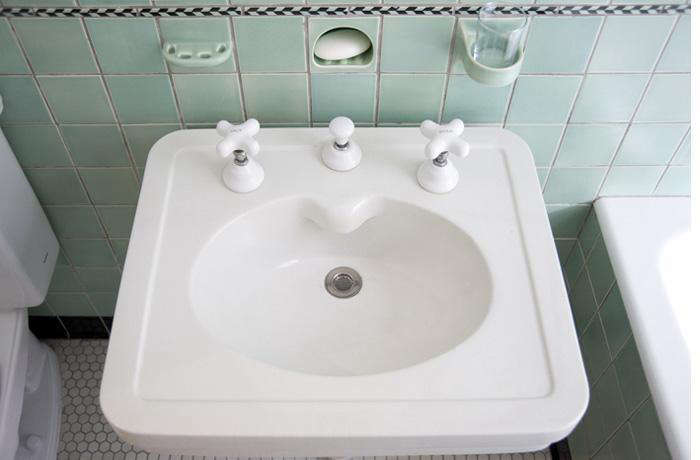 Above: A classic bath in Brooklyn, with restored tile work and vintage, time-tested features like a built-in soap dish, glass holder, and toothbrush holder, via Elizabeth Roberts.

“Are you OK in there?” the hostess calls, rattling the doorknob.

I do not want to cause a fuss. I do not want to hear the low voices of other guests, now gathering outside the door as well, everyone wondering in hushed tones if I have fallen, if someone should call the fire department, if men with pickaxes should be summoned to knock down the door while I am scrabbling around on hands and knees in search of drywall screws.

And so I say, “Yes, I’m fine–out in a minute” in the chirpiest tone I can muster.

But really? We all deserve a better toilet paper holder

DIY: A Beauty Mask Made from Flowers