Table Mountain’s rocky northern face rears above the neat vegetable beds and cobbled paths of a young urban farm that lies on a rare flat among the steep streets of the well-to-do Cape Town suburb of Oranjezicht (which reclines on the mountain’s hottest flank). For decades an unused lawn bowling green languished here, accumulating trash and radiating neglect. Then serendipity, and some very hard work (an ancient recipe for success), intervened. In November 2012, ground was broken, and a new organic farm–the Oranjezicht City Farm–came to life.

Photography by Marie Viljoen for Gardenista except where noted. 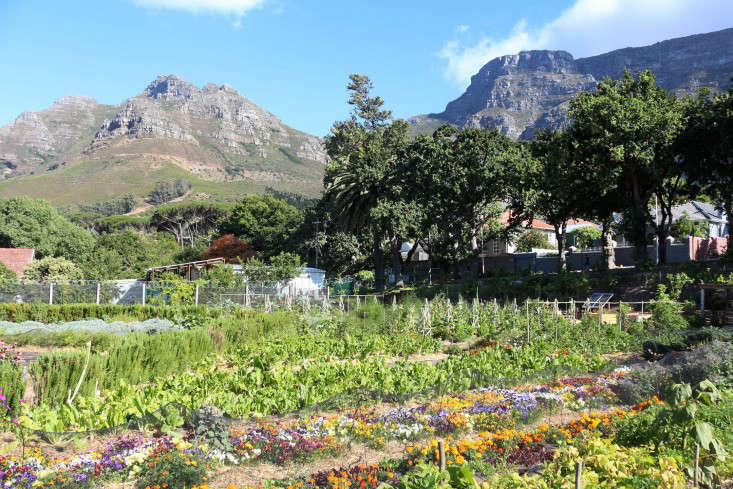 Above: The city farm is on a rare flat in Oranjezicht.

Did the ley lines said to intersect beneath Table Mountain contribute to the genesis of a creative team of local residents to bring agricultural vitality to the heart of Cape Town? There is Mario Graziani, an organic farmer who was irked to see land suited to food production lie wasted in the city. He wanted a farm. There was Sheryl Ozinsky, a founding member of the local neighborhood watch which had begun to maintain the overgrown site (Ozinsky is the former head of Cape Town Tourism and is widely credited with putting Cape Town on the international tourist map during her six year tenure, in the run-up to the World Cup in 2010.) She wanted a safe community.  And there was Kurt Ackermann, local business strategist and Ohio native who described the overgrown site as “an eyesore.”

They met, and things got hopping. 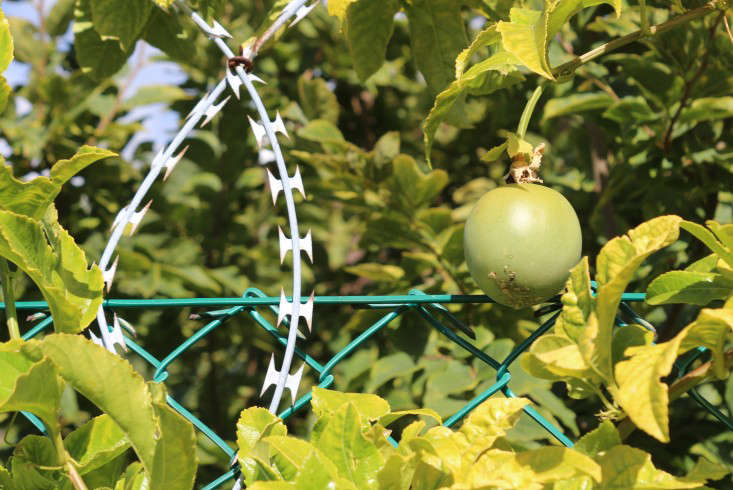 Above: South Africa is known for its beauty, its diversity, and its high crime rate. Not always in that order. After being attacked in her home 10 years ago, Ozinsky started the neighborhood watch. Of her motivation to develop a public farm on the abandoned bowling green, she says, “I realized that in order to make our neighborhood safer, we had to use our public spaces.”

In a country whose affluent homes are characterized by compound-like enclosures (my mother’s is an exception), she says, “We want to tear down the high walls of our suburbs and create spaces where neighbors can meet and mingle… Once people feel safer, then you can start working on initiatives that result in more joy than pure safety, like urban agriculture, on neglected public sites.” 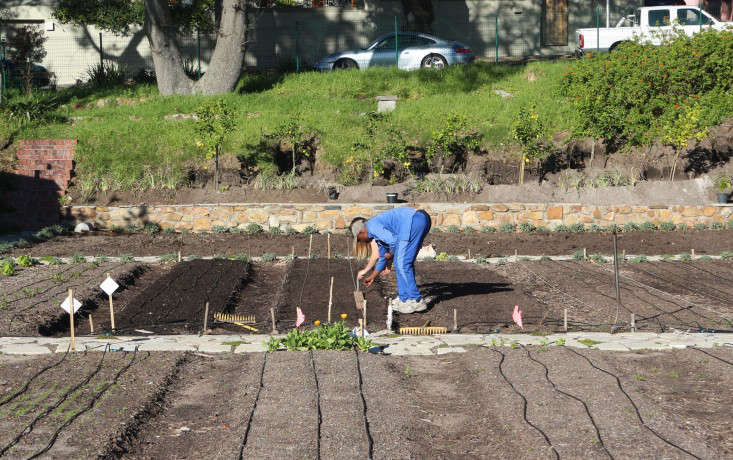 Above: The land has come full circle: In the mid-17th century this pocket of green was part of the Oranjezicht Homestead (the timeline on the city farm’s website traces this history), the largest farm in the Upper Table Valley. The formal walkways, crossed at right angles by smaller paths, are edged with hedges. While the layout pays tribute to old Dutch designs at the Cape, many of the plants are uniquely South African. 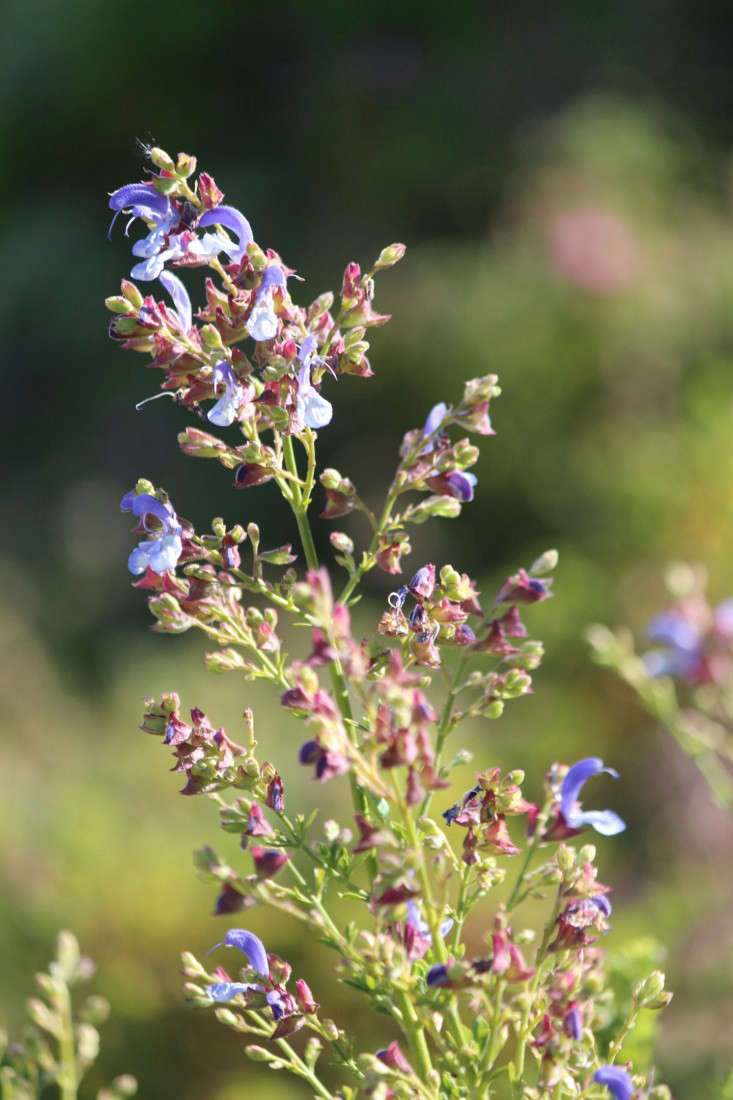 Above: Salvia in bloom. 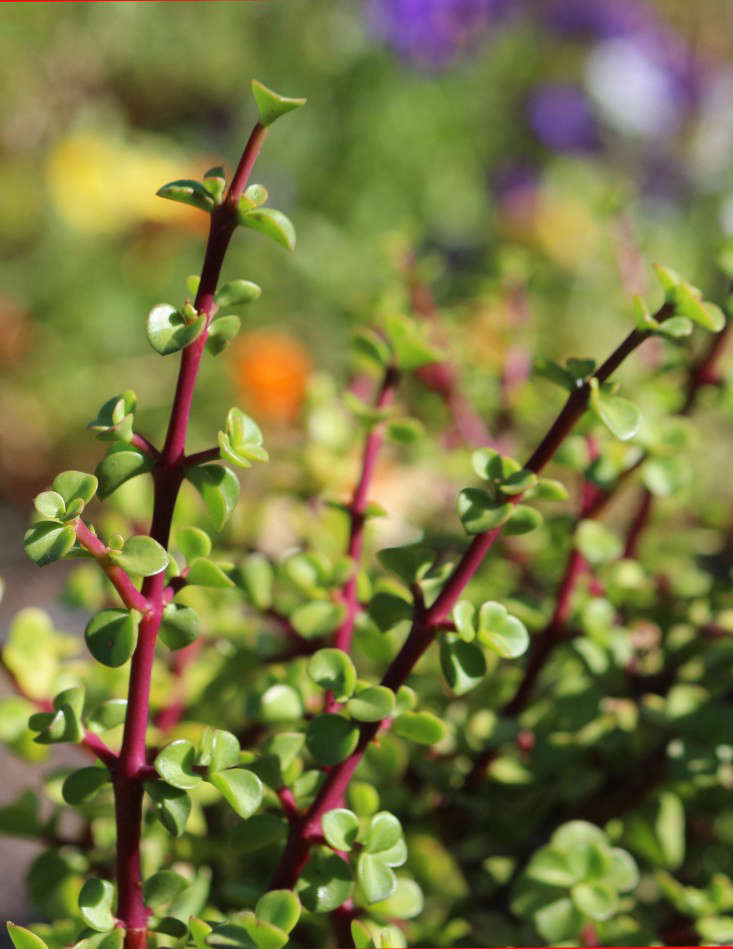 Indigenous plants are coming into their own in South Africa’s progressive food scene as foragers and chefs transform their naturally curious appetites into good things to eat. Local cook and wild foods teacher Loubie Rusch uses the spekboom, a succulent with tart, juicy leaves, in salads and relishes, and she sells her potent lemon-buchu cordial under her Making KOS label at the popular bi-weekly OZCF Farmers Market. The spekboom and Natal plum hedges were planted on her recommendation.

Above: Photograph by Claire Gunn.

Hundreds of years ago the original farm helped supply passing tall ships with fresh produce. Now it contributes to 21st century plates created by local chefs. Vanessa Marx, the head chef at Dear Me, an “all day brasserie” in the city which emphasizes the use of locally grown food, visits the city farm twice a week to collect the best vegetables she can find. 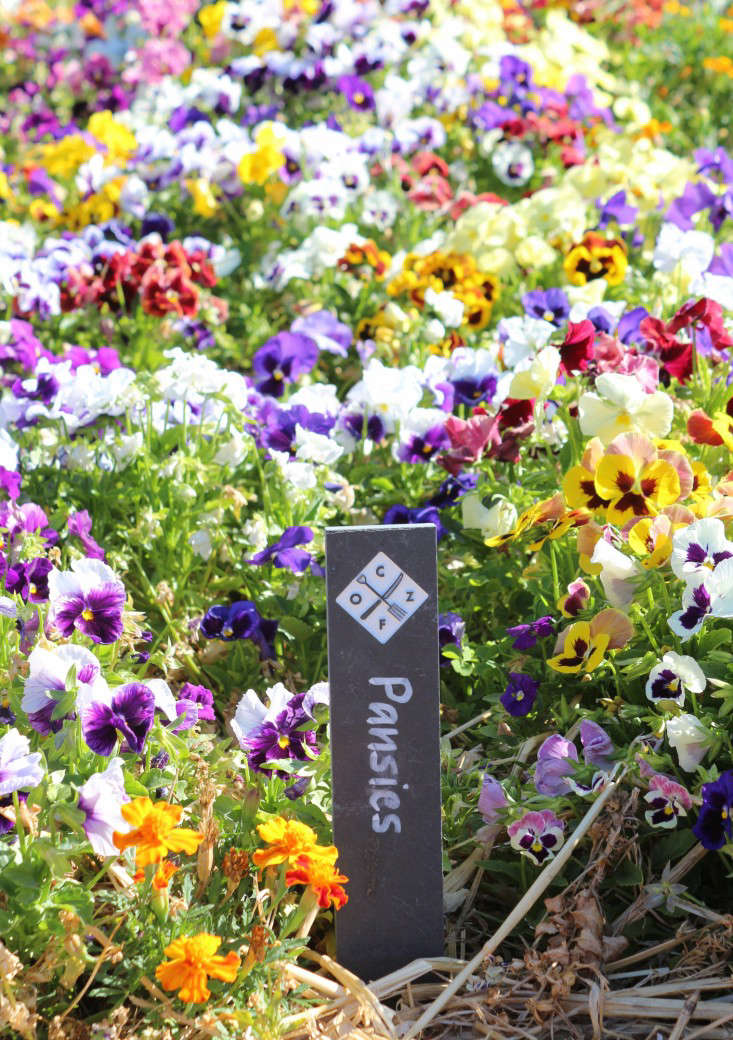 Above: Pansies are a popular edible flower planted as a crop, making a riot of color as long as cool Cape evenings last. 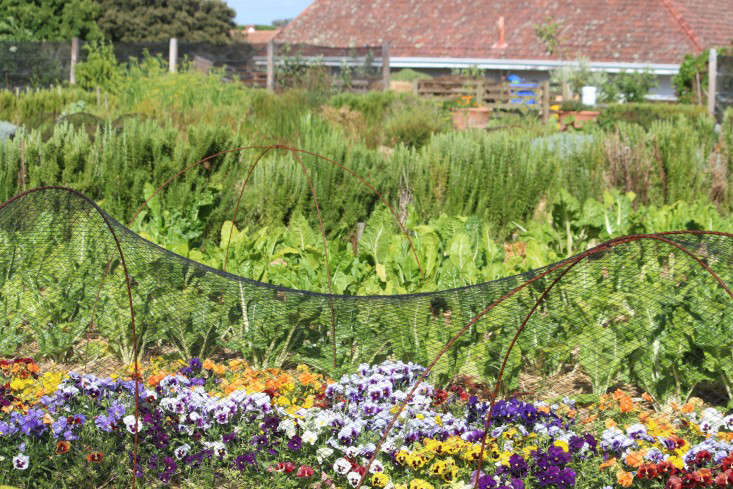 Above: Plants are protected from birds and squirrels under hooped nets. “The Egyptian geese are a big problem,” says farmer Graziani.

Growing crops is a high-maintenance endeavor, and the market generates income to employ three full-time micro-farmers. “Five percent of the produce at the market day is from OZCF,” says Ozinsky. “The balance is from small organic farmers we work with in Philippi, Stellenbosch, Mannenberg [communities on the Cape Flats].” Profits are plowed back into the farm. The rest of the labor, be it intellectual or manual, is all voluntary. Workers are always welcome.

Above: Of all the fruit and vegetables grown organically at the farm, Ozinsky, who uses OZCF produce at home “all the time,” names heirloom tomatoes as a personal favorite. She describes them as “life-changing in their juicy, almost buttery texture.” Anyone who has grown tomatoes knows what she means. In Cape Town, they are just coming into season. Tomato sandwich? Torture for the frigid North. 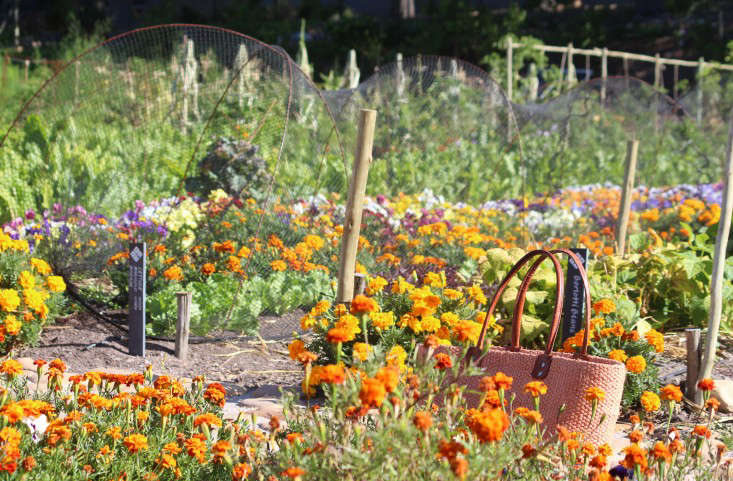 Above: On the first Wednesday of every month between 5 pm and 7 pm, Pick Your Own is a beguiling way of connecting with visitors. Stellenbosch University student Demi-Sue Meyer recently filled her basket there. She said, “At first my friends and I were a bit hesitant to take food without paying, because we have never been given the opportunity to harvest from a community garden like this, but after speaking to the farmer that day we spent almost an hour … hunting for the most amazing things.” She posted her dinner on Instagram. (While donations are welcome, they are not obligatory.) 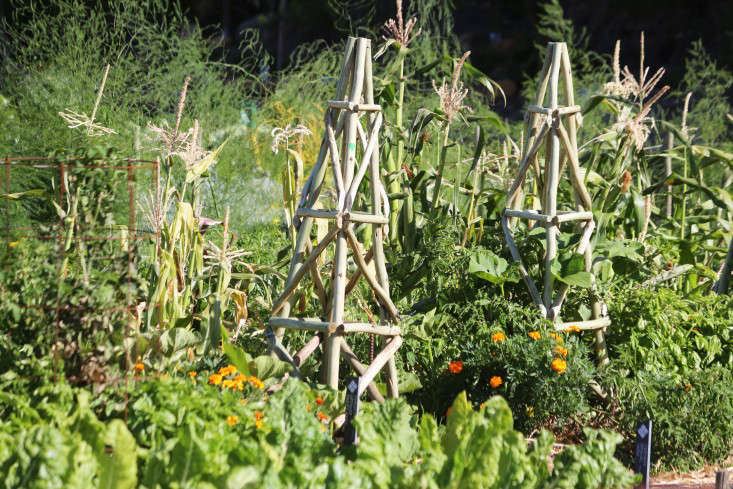 Above: Teepees among the lettuces.

Graziani is so concerned that visitors pick their fill that, he says, “I tend to take very little from the farm as it feels odd to harvest for myself. Some chard, a few onions and salad greens if available.” 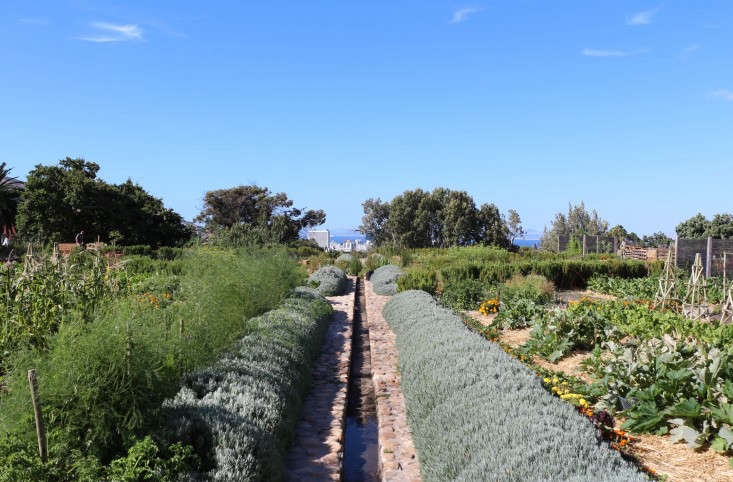 Above: Challenges remain, as they do in every garden (where it’s all about life and death). Thirteen natural springs run through the property, but “we are in a process with the local authority trying to access the water for irrigation,” says Ozinsky. For now a concrete rill directs the potential leiwater. 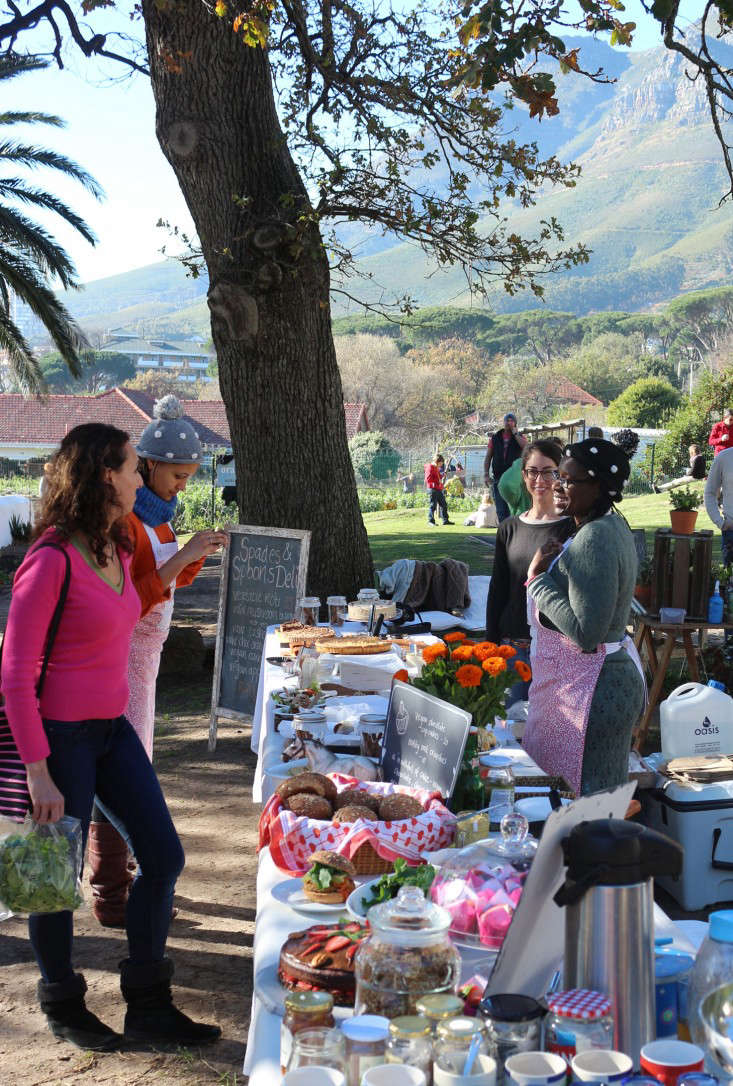 Above: The market has moved for now to Leeuwenhof,  the official residence of the premier of the Western Cape, lower down the slopes, after Heritage Western Cape (a government body whose purview is historic sites) objected to aspects of its infrastructure. Re-zoning issues loom. And potatoes planted in car tires were not a success: “With time one learns that certain crops or simply different varieties don’t do well in certain areas…sometimes it works simply by moving a variety a few metres away,” wrote Graziani in an email. 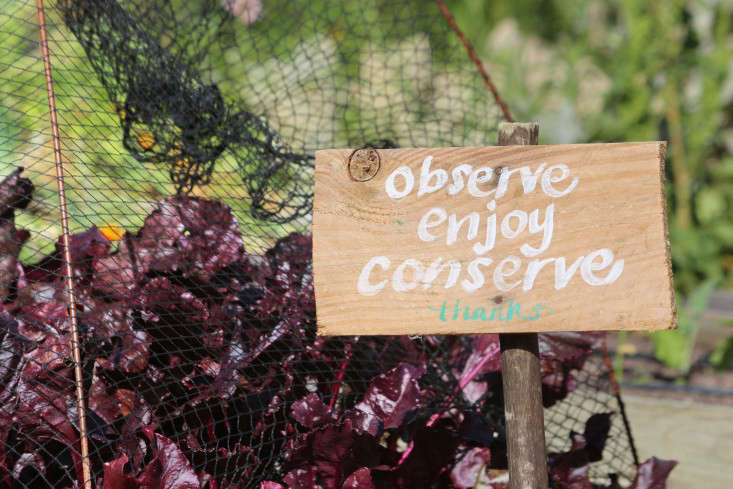 Above: But “change begins in our communities …,” reads the OZCF’s mission statement, and it is clear that the community has rallied around this fledgling farm, which has changed a suburb and the way people think about local land use and food. The farm’s Facebook and Twitter feeds buzz with news.  Visitors post on Tumblr and Instagram.  From the garden and from the classes held here they take away a new awareness of how they eat, and what is possible.

Of her first foray here Meyer ended by saying, “The experience made me feel hopeful of growing my own food at home one day. Harvesting my own organic vegetables and fruit put a massive smile on my face.”

And that is what a farm should do.