Although the Chelsea Flower Show is traditionally the beginning of the Social Season–for some–with its obligatory “will it, won’t it” weather, there are plenty of people who go there for the plants alone. They’re not interested in show gardens or trade stands; they just want horticulture, at its peak of perfection.

But it’s not that simple. With two hours a day of TV coverage for five days at least, the Chelsea Flower Show is not allowed to be just about flowers. We are given a list on press day titled “Celebrity Spotting.” Those on the list will be found standing by show gardens waiting for their pictures to be taken, at the given time. With the exception of Dame Helen Mirren, who sweeps into the floral marquee to open Burncoose Nurseries’ display, there is a very mild level of interest in the celebrities. Most people are there because they love gardening, whether they are exhibitors, press, judges, or Royal Horticultural Society grandees. And that’s why it’s such a good party.

Above: Celebrated, in the gardening world. Cleve West, who won Best in Show for two years running, returns this year as a visitor, at the garden of Jo Thompson.

Above: Stop the Spread is the name of Jo Thompson’s garden, which is intended to focus on the dangers to native species from infected imports. It features dead trees (providing a surprisingly effective foreground) and a memorial to the ash tree, which has been hit in the UK this year with die back. The herbaceous planting by contrast is soft and ebullient. There are more flowers here than in many of the show gardens which may be a surprise given the subject matter.

Above: Another demanding brief carried off with aplomb is the Sowing the Seeds of Change garden by Adam Frost. The sponsors were on hand to explain that this is an inter-generational garden, intended for old and young, where the former can relax and the latter can grow food and re-connect with the land. They also need room for entertaining… Many of the plants will be available at Homebase, though the delightful beehive, which took three weeks to make, is not yet scheduled for mass production.

Above: Jinny Blom in red and blue, being interviewed about the garden she made for Prince Harry’s charity Sentebale. It’s so confidently unusual that it will also do well. 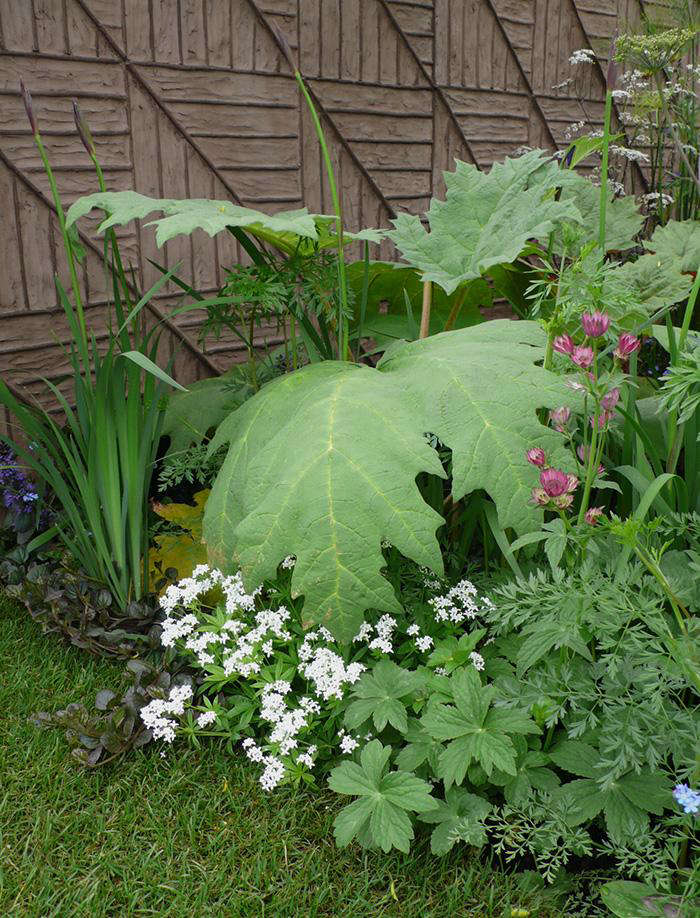 Above: Large leaves are a feature this year. In Jinny Blom’s garden, rheum contrasts with iris and claret astrantia.

Above: Iris is probably the most iconic Chelsea flower as it is guaranteed to be in bloom. Or is it? “The plants have been held back this year,” says garden designer and past exhibitor Dan Pearson. “There has been a terrible struggle to get plants to bloom on time.”

Above: The arrested development in the plant world is illustrated with Ulf Nordfjell’s meadow of corn cockles for his Champagne garden. They may be in flower by the end of the week, but then again they may not.

Above: The Chelsea Flower Show is held in the grounds of the Royal Hospital, home to scarlet-clad ex-servicemen the Chelsea Pensioners. To the right in this picture is the legendary Sibylle Kreutzberger, former joint-head gardener at Sissinghurst. She is wearing her Royal Horticultural Society Victoria Medal. “The number of medals available correspond to the years of Victoria’s reign,” she explains. “They only give them to people who will soon be pushing up the daisies.”

Above: The keenly anticipated Telegraph garden from Christopher Bradley-Hole, multiple gold medal and Best in Show winner. Described as “gloomy” by more than one source, Sibylle here remarked, in a general way, “These gardens are looking very chaste.” Dan Pearson came to its defense with: “It’s very subtle. There’s more and more to look at.”

And now for something completely different. The winner of Best in Show at Chelsea 2013 is… Trailfinders Australian Garden, featuring a billabong and waterfalls.

Marrying Pots and Plants at Mrs. Robertson in Fort Greene