In the decades since modernist architect Richard Neutra designed a 6,900-square-foot house in Beverly Hills for developer Herbert Kronish and his second wife, the midcentury masterpiece passed through a succession of owners and suffered many indignities—the worst of which may have been the addition of an ornate fountain topped by a robed nymph toting a Grecian urn.

By 2011, the circa-1954 house, the only intact example of Neutra’s work in Beverly Hills, had been sold at a foreclosure auction and was on the verge of demolition when local preservationists mounted a protest. Greek shipping fortune heir Stavros Niarchos Jr. bought the property for $12.8 million, hoping to preserve the house and gardens.

Photography courtesy of Marmol Radziner and the American Society of Landscape Architects. 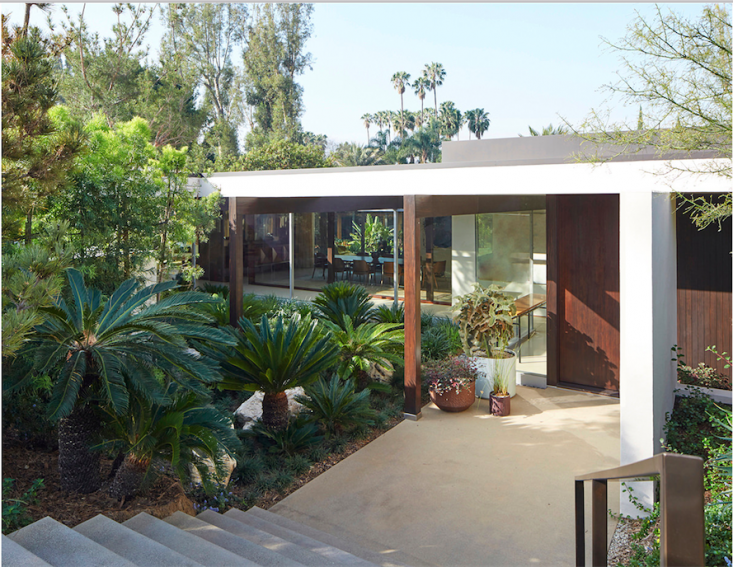 The house has three wings, with a glass-enclosed central garden that welcomes visitors as they arrive at the main entrance. Working from architectural photographer Julius Shulman’s images of the house taken soon after its construction, the architects stripped away extraneous modifications and restored slopes and other landscape elevations. 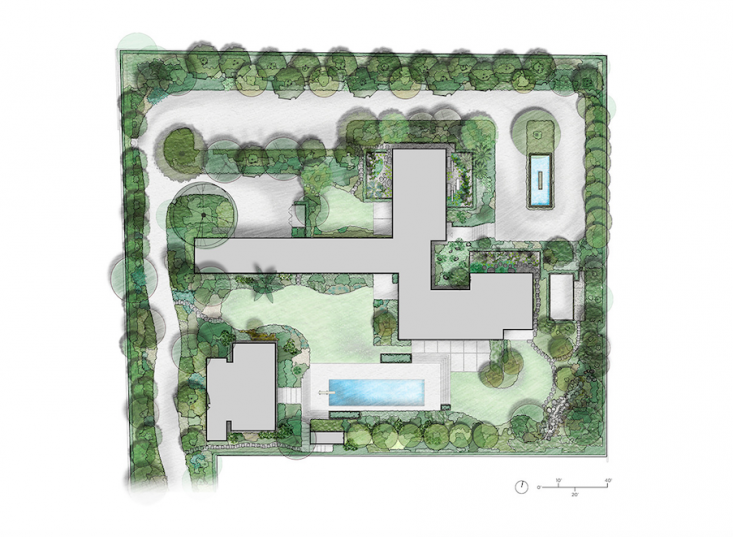 Above: Photograph courtesy of Marmol Radziner.

A 250-foot-long driveway wraps around the perimeter of the property before reaching the house’s main entrance, which is shielded from the street. 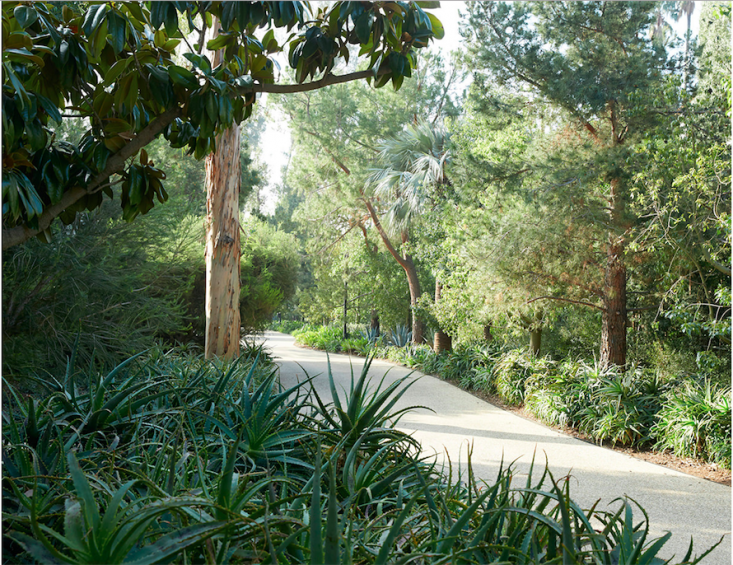 Although the property sits adjacent to busy Sunset Boulevard, a long driveway lined with trees and succulents provides a buffer zone. More than 100 specimen trees are planted alongside the winding driveway. 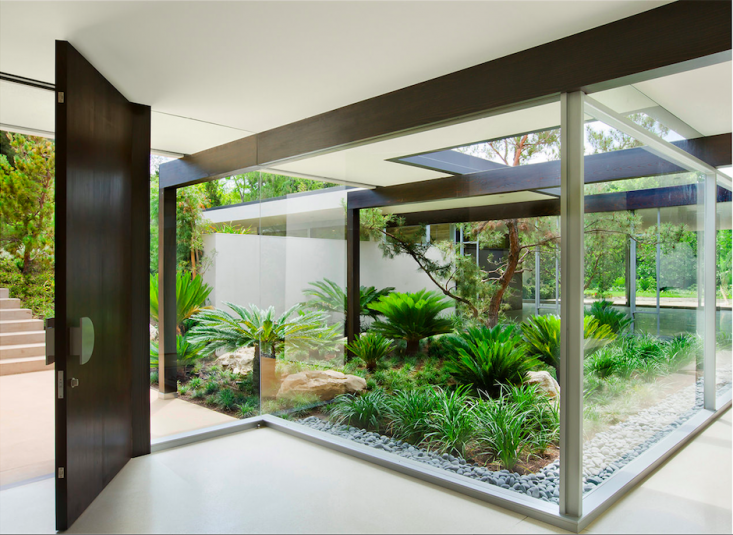 Above: Photograph courtesy of Manolo Langis.

Inside the front door is a glass-walled foyer that looks out onto the central garden. Windows and hardware were recreated to original specifications and in the courtyard, “overgrown and neglected plantings were removed and replaced with a palette aligning with the original intent,” say the architects. “The original boulders were retained and placed per the historic photographs.” 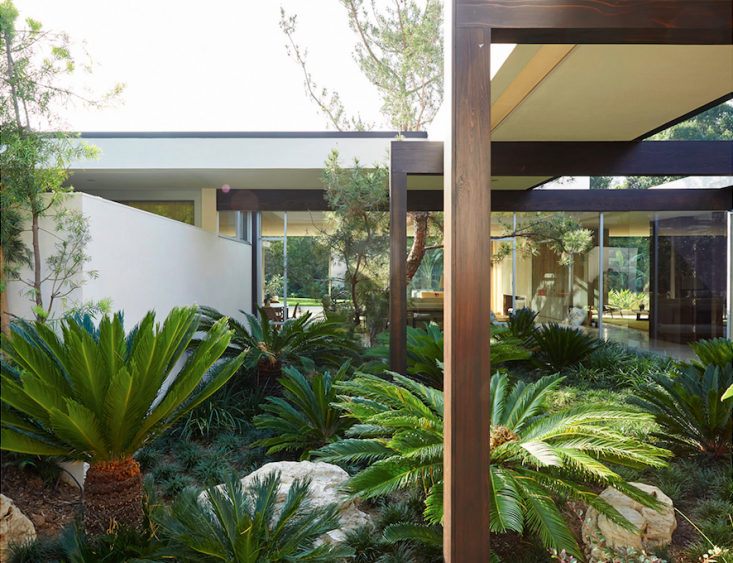 “The original design of the house featured a unique connection between the interior and exterior spaces, including large sliding glass doors, extensive patios, deep overhangs, and spider leg post-and-beam supports which jutted out into the landscape,” say the architects. 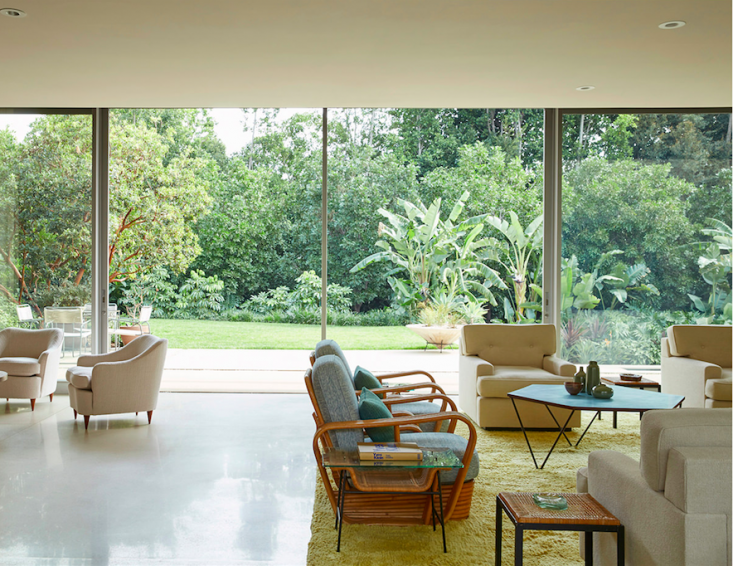 Visible through a wall of sliding glass doors are the main lawn and pool deck, restored to their original elevations. 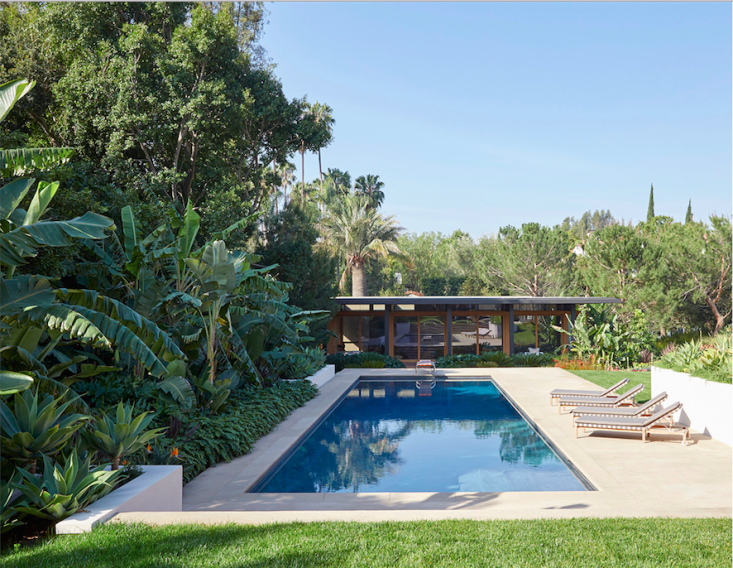 Above: Beyond a terraced patio and sloping lawn that match the original design, the swimming pool is connected to a new guest house. Photograph by Roger Davies.

“The original, dynamic, terraced configuration of the main patio and pool deck had been filled in and rearranged,” the architects say. “The restoration brought back the built-in planters, stairs, and sloping lawn that Neutra had envisioned for the space.” 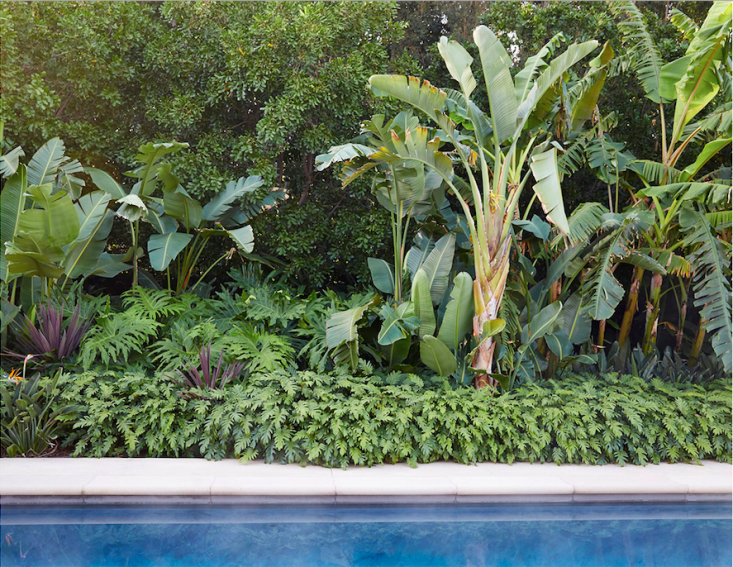 Above: Tropical plants at the edge of the swimming pool create an extra layer of privacy. Photograph by Roger Davies. 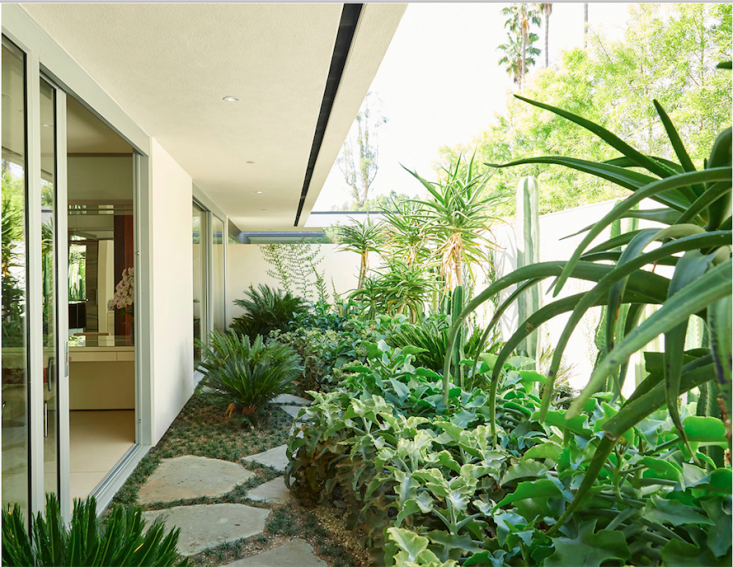 Above: In the main house, a courtyard outside the master bedroom is planted with textured layers of foliage. Photograph by Roger Davies. 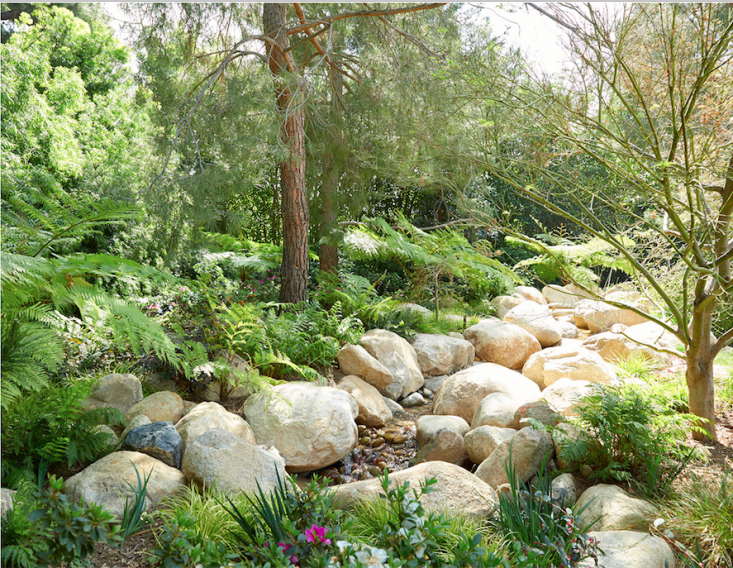 To the southeast of the master suite ferns and rocks surround a narrow stream. When the architects first saw the property, “vacant and neglected over many years, the site was overgrown with volunteer trees and shrubs which provided little habitat or other wildlife value,” they say. “The addition of hundreds of mature trees and countless flowering shrubs, perennials, and groun dcovers, brought in a flood of nesting birds and insect pollinators.” 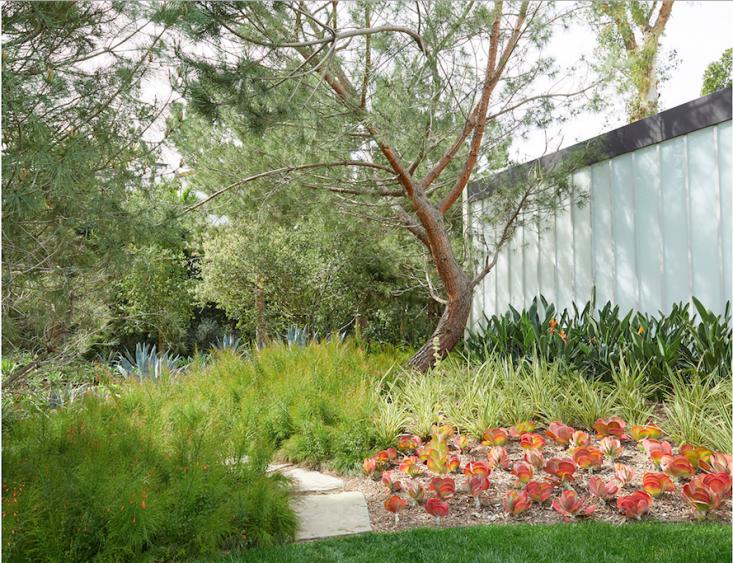 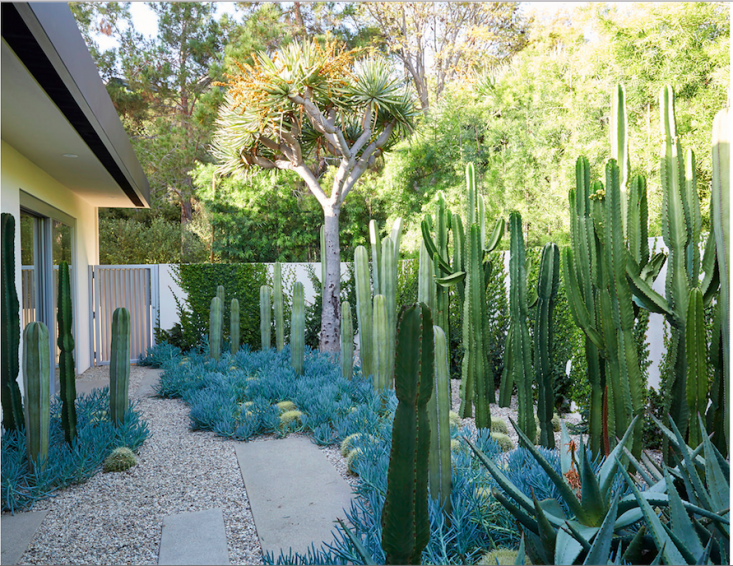 Above: In a courtyard outside the east guest suite is a desertscape, featuring succulents and gravel from Bourget Brothers. Photograph by Roger Davies.

For more of our favorite LA gardens, see Swimming Pool of the Week: A Modern Update in Beverly Hills and Designer Visit: An Indoor-Outdoor LA Garden by Judy Kameon.